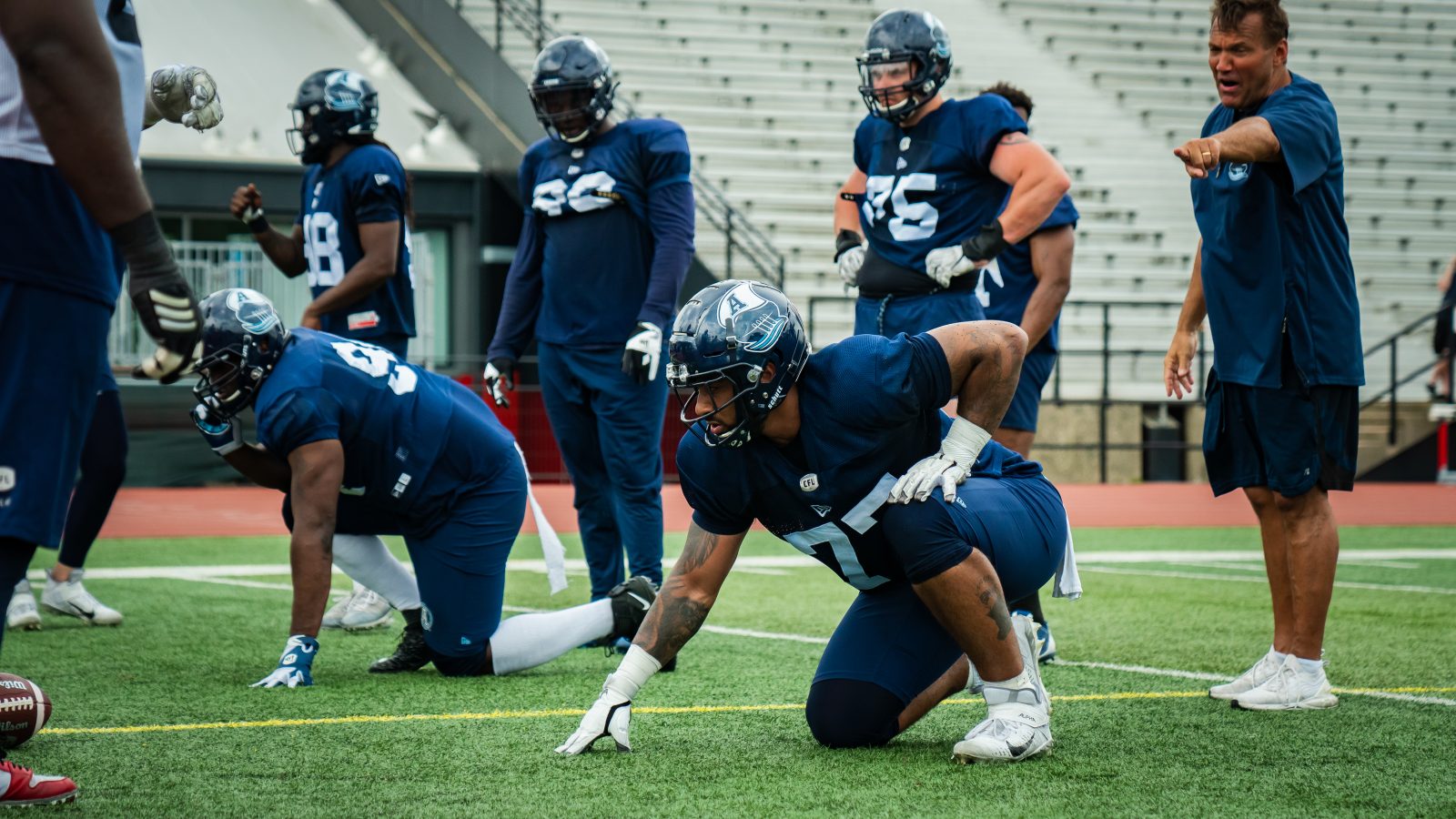 It’s not the most glamorous life.

Offensive linemen do a ton of the heavy lifting but never get enough love. You don’t win without a good-to-great o-line, and usually, the only time you hear their names on a broadcast is when they take a penalty.

*Note – This is not the case on Argo radio broadcasts, we constantly offer up big love for the big guys up front.

A year ago, the Argos had good pieces of the puzzle in place, but the group as a whole struggled at times. To correct that, the team has decided to go with a new look this year, adding an American starter so that both tackle position will now be manned by players from south of the border. Isiah Cage returns after battling injuries the last couple of seasons – including a season-ending ankle injury suffered during last year’s training camp – to man the left tackle position.

Dejon Allen played left tackle a year ago and will flip to the right side. The guards remain the same, with Philip Blake on the left and Dariusz Bladek on the right. The centre to start the season will be Justin Lawrence, who the Argos signed as a free agent in February. He had played in Calgary since he was drafted in 2018. He’ll man the middle until Peter Nicastro – the Argos top lineman and top rookie a year ago – returns from a knee injury suffered last year.

That’s the first unit, and according to Offensive Line Coach Kris Sweet, it’s a group that has started out even better than he had hoped.

“They’ve been a pleasant surprise,” he told Argonauts.ca. “We’re a little further ahead than I thought we’d be; the fact that they’ve been able to pick up on the new subtle calls and adjustments.”

Allen will have to make the biggest adjustment moving from the left to right side. A move from one end of the line to the other may not sound like much, but the intricacies of the footwork needed to excel at that position is something that not every player can master.

Allen isn’t fazed by it in the slightest. He’s adjusted before, playing guard, then tackle in college, but never where he’s lined up now.

“I’ve never played right side before,” he admitted. “But I can play all positions, so it’s pretty easy. I’ve been working on my footwork all my life, the ladder drills and things like that. I was originally a d-lineman coming out of high school; I’m just overall an athletic person so I can do both. I can flip my hips either way and play left or right.”

Until Nicastro returns, Dariusz Bladek will have a new player on each side of him. He’s getting to know Lawrence and likes what he’s seen so far. He’s also a big fan of Allen.

“Dejon’s a really good player,” Bladek told Argonauts.ca. “He has great footwork. Like anybody, when you get a new guy in there you’ve got to build chemistry, but we’ve done a really good job meshing so far.”

The 6’5”, 300-pound Bladek worked hard again during the off-season and had some monstrous blocks in Sunday’s Double Blue game, but most of this year’s focus will be on the left tackle spot and the return of Cage. The left tackle is looking to finally stay healthy and establish himself as one of the top linemen in the league.

Having him back is a huge addition for the group according to Bladek.

“It means everything. I know what it means to him more than it means to any of us. I know how long he’s been waiting for this moment, from last year in camp to even before. He’s been doing a great job and you can tell every day that when he comes to practice that he has a little more to him.”

It’s been so far, so good for the first unit. Communication hasn’t been a problem, and the rapid cohesion of the group has also been impressive. What’s needed now is for the o-line’s depth to take shape.

Nicastro is still on the shelf, while 2020 first-round pick Theren Churchill has returned home to be with his girlfriend in time for the birth of their first child. Other members of the line are either inexperienced or have been nicked up during camp.

The talent is there, it’s now just a matter of everything coming together.

After the inconsistencies of the Double Blue Game the night before, the offense looked much better on Monday morning. The first series looked particularly sharp, with McLeod Bethel-Thompson and Brandon Banks connecting on successive plays…”Speedy B” had his best day of camp, while Eric Rogers also had a day he’ll be pretty happy with as the veterans start getting their groove back…Rookie receiver Damonte Coxie not only had a great catch, taking one away from a defender on a deep 50/50 ball, but he also threw a fantastic block in space for A.J. Ouellette…Among those in attendance for the practice was former Argo receiver Andre Talbot, a Laurier product. He knows Alumni Stadium well as he recorded a U SPORTS record-tying 19 catches in a game on that field in 2000. He sat in the stands for some time with Michael Faulds, the current head coach of the Golden Hawks. Current Argos Kurleigh Gittens Jr., Robbie Smith, Sam Acheampong, Brandon Calver and 2022 draft pick Braydon Noll all played for Faulds at WLU. Gittens is also a U SPORTS record holder as he caught 75 passes in 2017…At the end of the session Head Coach Ryan Dinwiddie commended the team on a “Great practice,” something the staff – offensive coaches particularly – was hoping for after Sunday night’s scrimmage.