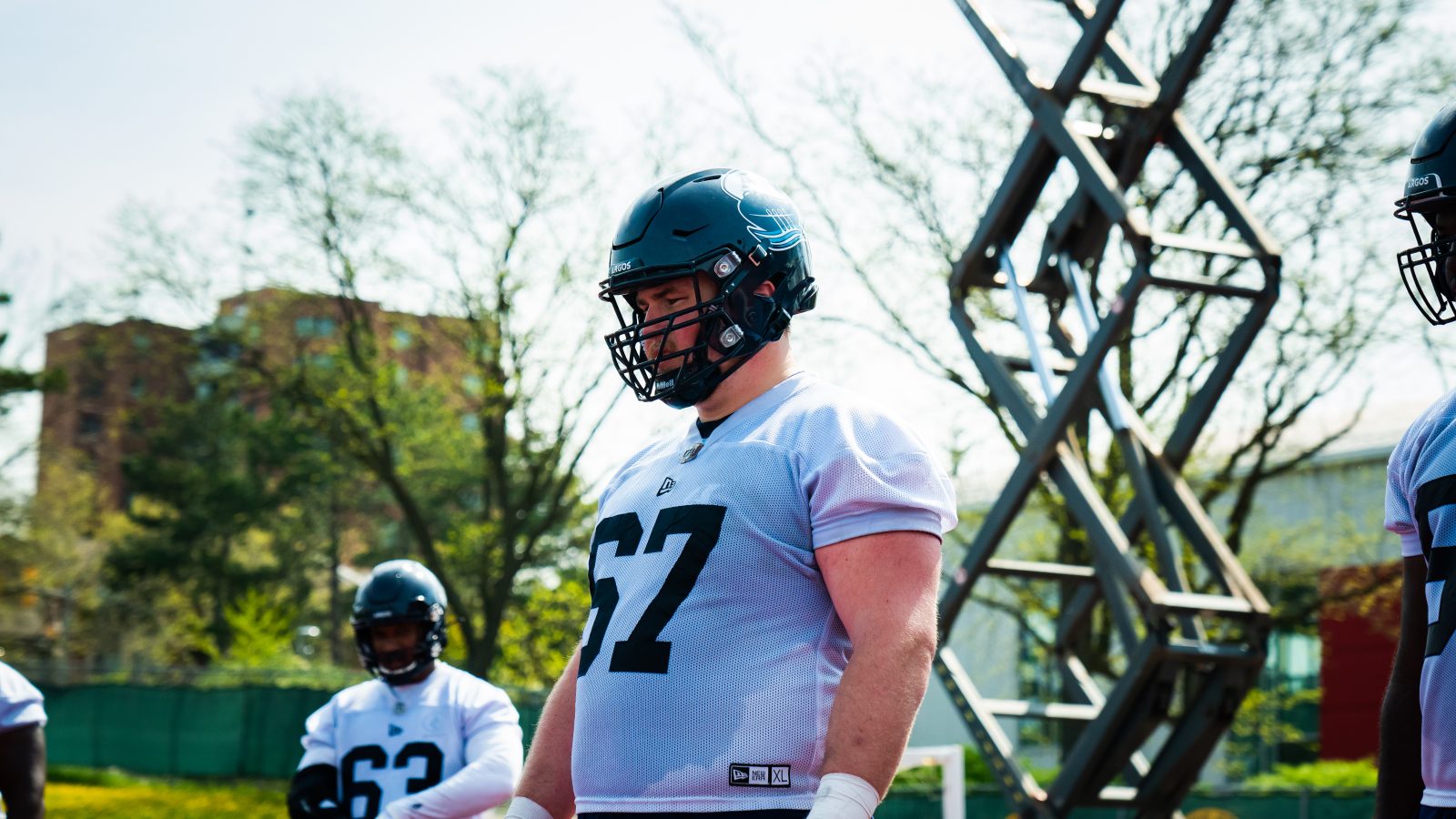 Players fit into one of three categories at training camp. There are veterans who know they’ll be on the roster and will start, there are CFL veterans or players with pro experience in the States who are fighting for a job, and there are rookies experiencing their first pro camp.

American rookies are added through the negotiation list or via free agency, while Canadian rookies have gone through the draft process. Three Argo rookies were selected in the first two rounds of the CFL Draft, held earlier this month, and are trying to earn a roster spot and playing time.

Gregor MacKellar was the Argos first-round selection this year, chosen sixth overall out of St. Francis Xavier University. The 6’5”, 310-pound offensive lineman, who played for a couple of seasons at St. Andrew’s College in Aurora, was overjoyed to hear his name called by the Argos so early in the draft.

“I was fired up, I was excited,” he told Argonauts.ca. “I didn’t really know what was going to happen that night, but I got the phone call from Toronto and I couldn’t be happier. I love the coaches; I love the atmosphere. It’s been a great experience so far and I can’t wait to keep learning and keep growing.”

It’s been a learning curve for the Timberlea, Nova Scotia native, and he likens the process to what most golfers go through on a swing-by-swing basis. 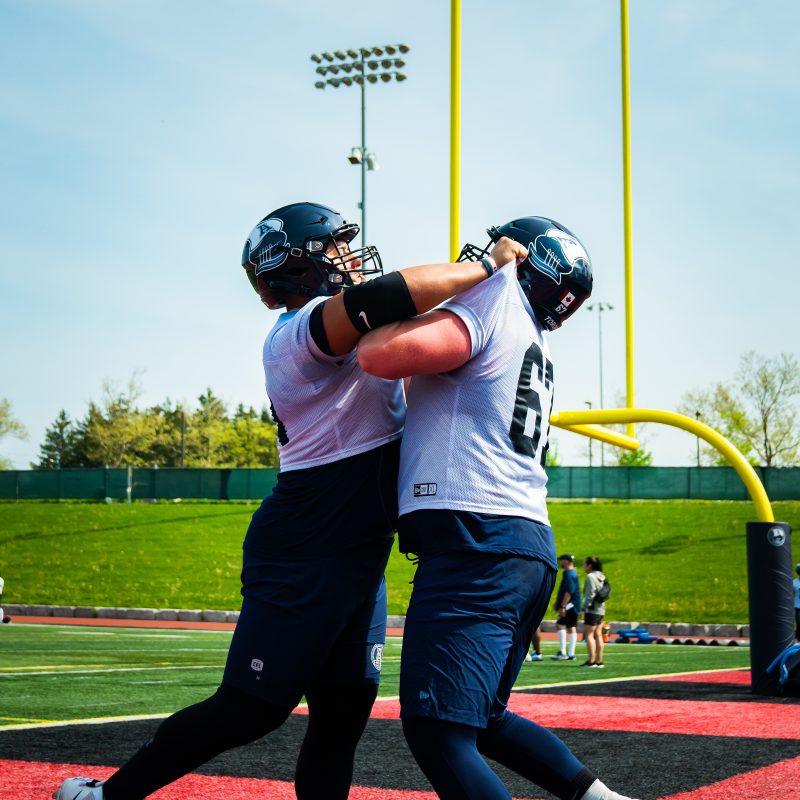 Even though he’s a first-round pick, there’s no guarantee he’ll even be on the dress roster when the regular season opens at BMO Field on June 16 against Montreal; that’s how deep the o-line is. There are currently nine Canadians fighting for in all likelihood three starting jobs and a pair of game day roster spots. With returning players Dariusz Bladek and Philip Blake at guards, and free agent Justin Lawrence holding down the centre spot until Peter Nicastro returns from injury, it leaves just two roster spots available.

MacKellar is competing against veterans Shane Richards, Dylan Giffen, Jonathan Zamora, and fellow newcomers Mojtaba Mehri and Braydon Noll. The field would be even more crowded, but 2020 first-round pick Theren Churchill has opted to return home to Alberta to await the birth of his first child. He will be back in the not-too-distant future.

The Argos had a pair of second-round picks this year and were thrilled that both Deionte Knight and Daniel Adeboboye were available.

Knight was selected with the tenth overall pick, acquired from Edmonton in the Nick Arbuckle deal that also landed the Boatmen quarterback Chad Kelly. A defensive lineman from Western, Knight put the pads on for the first time on Friday after arriving on Thursday and signing his contract.

“Competing against grown men is at a completely different speed,” the 23-year-old told Argonauts.ca. “It’s a different hunger. Every rep is a game rep, a very important rep. It’s not like in college, you’ve got to bring it. Coach Mace (Defensive Coordinator Corey Mace) has been amazing, I’m just trying to learn from him and keep growing as an athlete.” 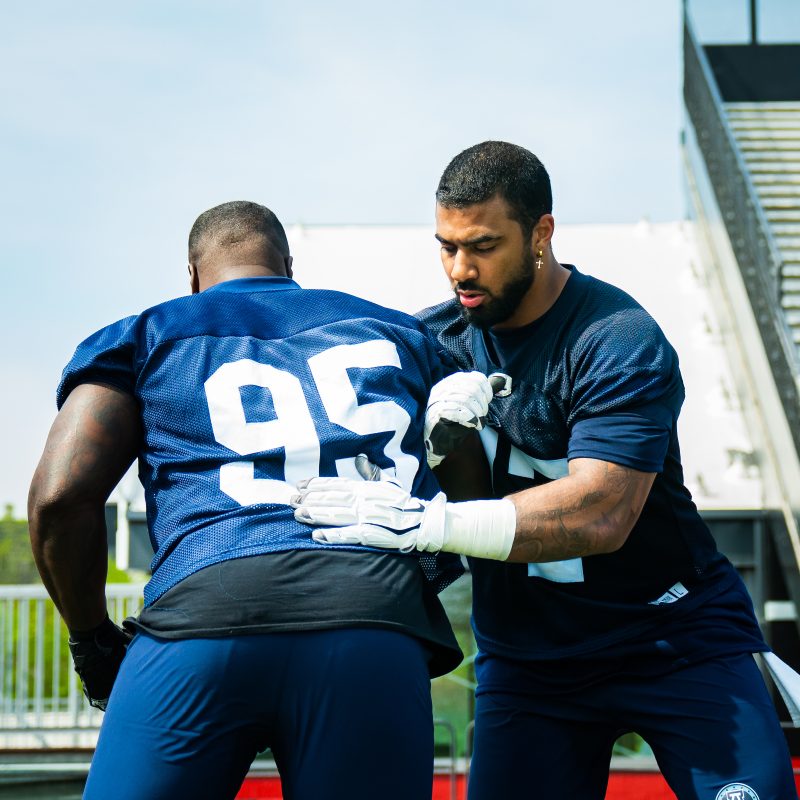 Knight grew up in Ottawa before moving to Ajax and attending Pickering High School. He’d eventually head west to attend Football North Prep School at Clarkson High School in Mississauga. To say the least, he was pumped that he was selected by the Boatmen and can play close to friends and family.

“It’s everything to me. On draft night we were anticipating that I’d go somewhere close to home and thank goodness that by the grace of the football gods the Argonauts decided to take a chance on me. Now I just have to prove them right and prove myself.”

Running back Adeboboye (pronounced ad-eh-bo-BOY-ay) was also a second-round pick, chosen with the 15th selection.

He’s fit in nicely and doesn’t look out of place in terms of running style or physique. The first thing you’ll notice about him are his thighs. They’re so muscular he has a problem doing something most people take for granted; buying pants off the rack.

“There are a couple of places that I can’t shop,” he said while sporting a big grin. “They don’t have pants in my size. I have to get stretchier pants or get pants where the waist is way too big for me and it looks like one of those commercials where the person has lost weight, that’s how it looks when I try on those pants (laughs).”

He says he’s never measured his thighs, but they’re not just for show.

“I like working out and I like exercising, so with that comes muscle being built. I want to show that the power that I have isn’t just for show; it’s going to show itself on the field.”

Adeboboye is a Toronto native who played at Northern Secondary before going to prep school in Pennsylvania. He grew up watching the Argos, with two players being his favourites.

“Chad Kackert was a great running back, and Chad Owens.” Adeboboye told Argonauts.ca “He wasn’t the biggest guy and I’m not the biggest person either and he gave me a little hope that maybe I can actually play football at my size. And (Adeboboye loved) watching a Hall of Famer like Ricky Ray and Andre Durie back in the day.”

He added it’s “surreal” when he looks down and sees he’s wearing an Argo logo. 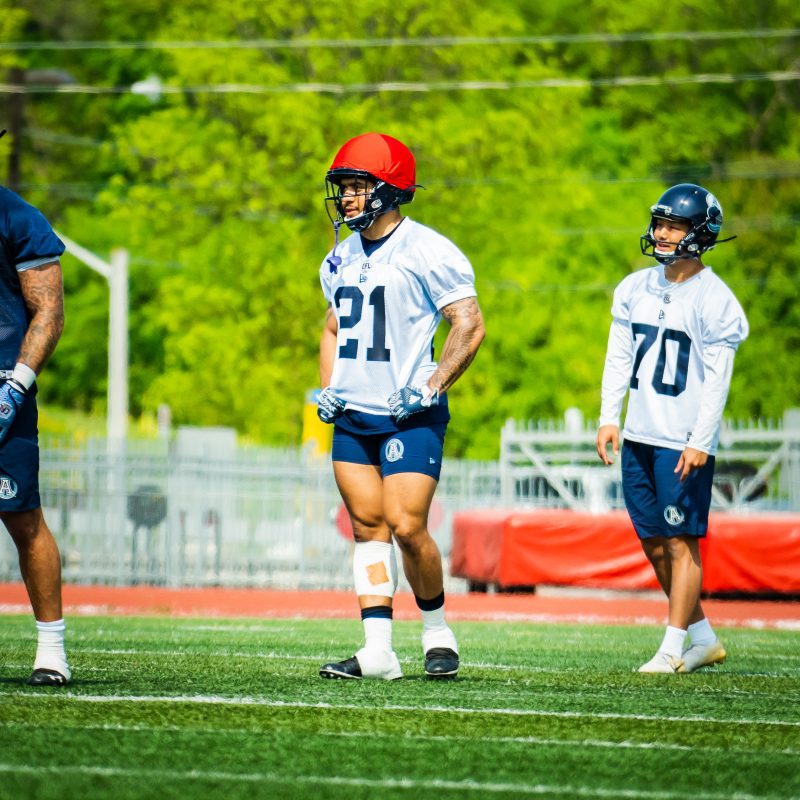 “It’s a dream come true,” said the 23-year old. “The first team I ever watched was the Argos back when they were in the SkyDome. Watching them play there and then getting the chance to live out my dream and play for my city? Playing for my hometown city is every kid’s dream and that’s my top priority. Bringing a championship back would be amazing.”

The trio of rookies have a couple of things in common; they’re extremely talented and are thrilled to be in Toronto. Their addition only adds to an already deep roster of Canadian talent.

On Thursday the offense had the better day, but that wasn’t the case on Friday as the defence dominated. Kony Ealy set the tone early with a knockdown, while shortly after that Chris Edwards broke up a pass on a deep route. Maurice Carnell IV had an early interception, while Robertson Daniel – playing with the first unit at halfback for the injured Shaq Richardson – had a pick and an overall solid day…Another defensive back, Arjen Colquhoun, announced his retirement. He’s now an account executive at MLSE and has been doing an outstanding job…A handful of returners fielded punts today from Boris Bede, John Haggerty and Toshiki Sato. Chandler Worthy, Brandon Banks, Darece Roberson Jr., Isaiah Wright, D’Angelo Amos and Earnest Edwards all took turns, while another potential returner, Javon Leake, stayed with the running backs…Haggerty has been acting as Bede’s holder. He did that last year at Western Kentucky…On one play Julian McCleod looked like he had injured his leg. As he was jumping on one leg in obvious discomfort, a teammate came on the field and tried to replace him. McCleod waived the teammate off, then on the next play he blew up the opposing o-lineman and had a clear shot at the QB.