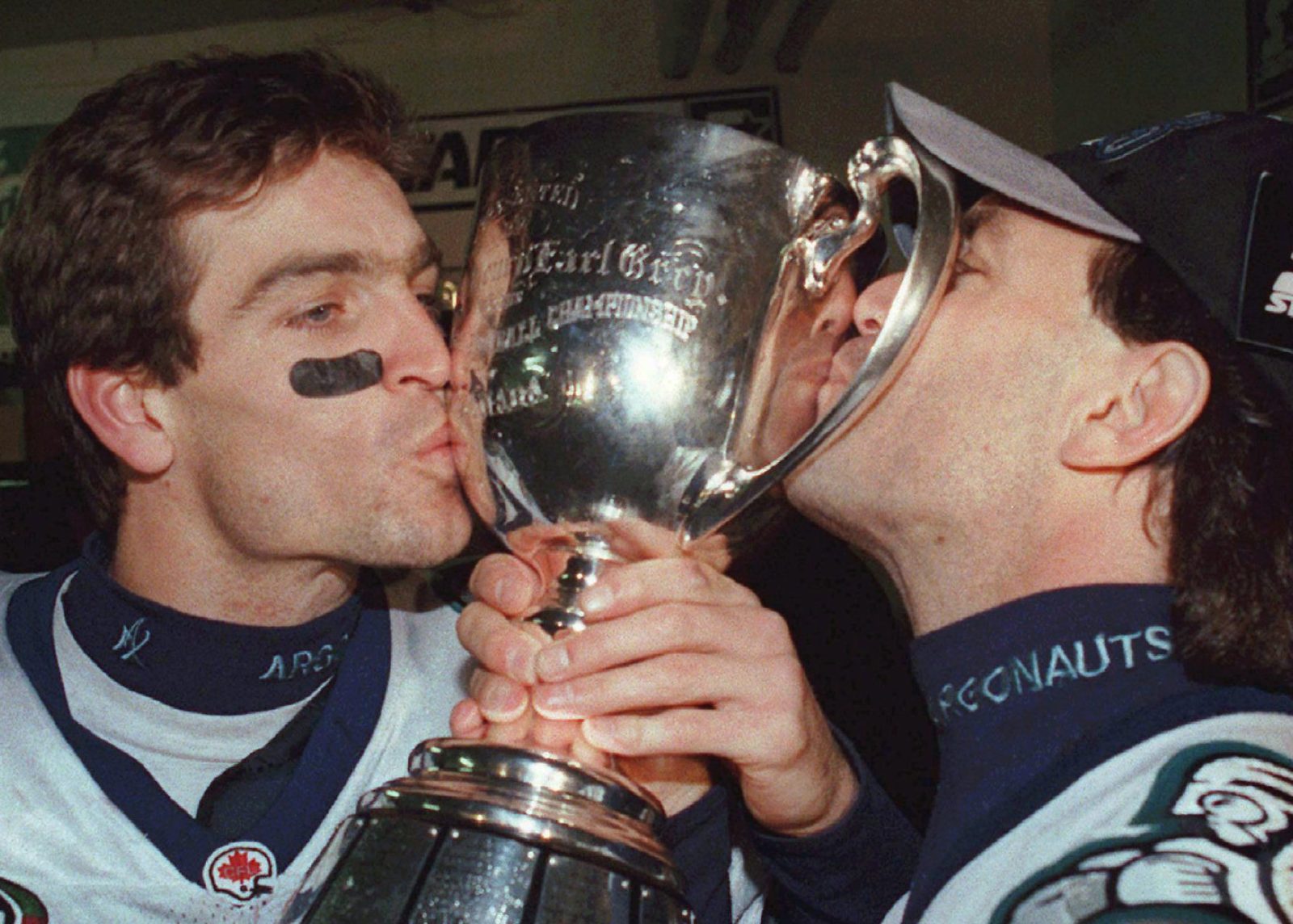 It’s a roll of the dice, a crapshoot, a lottery, an educated guess, an inexact science.

The CFL Draft will be held May 3rd and if it is a lottery, the Argos have nine tickets. It’s an eight-round draft and the Boatmen have all of their own picks, plus the 10th overall selection, acquired in the deal that sent Nick Arbuckle to Edmonton. The Argos also picked up the rights to quarterback Chad Kelly in that deal.

Oddly, the Argos have never held a true sixth pick. The only time the Argos technically had the sixth pick was in 1982, but this was in the era of territorially protected players. That year 18 players were never draft-eligible as they were protected by their local teams before the selection process started.

That year the Argos did have the sixth pick, but the player chosen was the 24th player off the board, so to speak. It worked out okay for the Boatmen as offensive lineman Tony Antunovic was the pick. The Simon Fraser product became a fixture on the team’s offensive line, taking over as the starting centre in his second season.

“Tuna” was an incredibly popular player with both fans and teammates. He spent five seasons in Double Blue, suiting up for 49 regular-season games and contributing to the Argo teams that made the Grey Cup final in 1982, and won it a year later.

It became a stellar draft for the Argos in terms of offensive linemen as they also had the seventh pick and selected Chris Schultz.

If the Argos knew they could draft a dynamic player on Tuesday who would quickly become a fan favourite and be a major contributor to a Grey Cup winner they’d jump at it. That’s what happened in 1989 when the team went to Slippery Rock University to select Mike Campbell.

“Crush” was a terror to opposing quarterbacks, recording 30 sacks over five seasons in Toronto, including 13 in the ’91 Grey Cup run. Known for his big personality, No. 99 played on the defensive line for the Argos between 1989 and 1994. He was twice named an All-Star while wearing Double Blue.

Again, number 15 hasn’t come up in the draft often for the Argos.

In 1982 Geoff Townsend was selected, but with the territorial protection aspect he was in all honesty the 23rd player off the board. 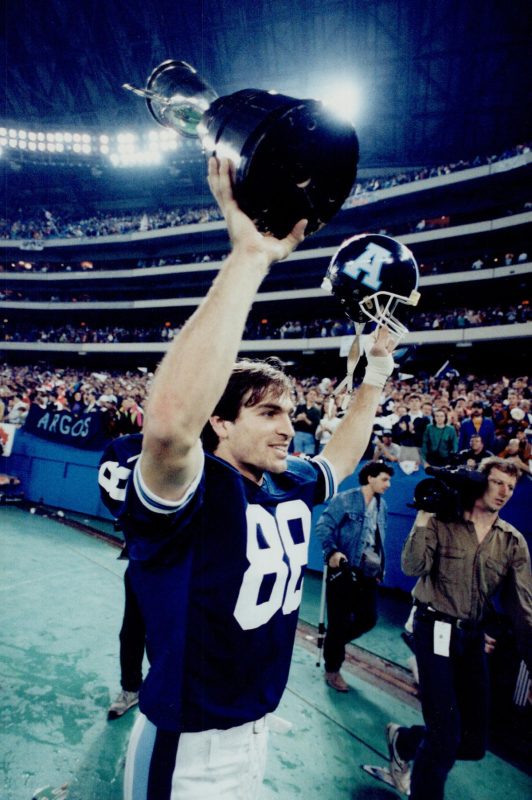 The only other time the Argos had pick No. 15 was in 1988 and they absolutely nailed it by choosing a skinny receiver from Acadia. By the time his career was over Paul Masotti was the leading receiver in Argo history, subsequently surpassed by only Derrell “Mookie” Mitchell.

The Stoney Creek native caught 556 passes for 8,772 yards and 44 touchdowns. He saved his best games for the biggest stage, catching a TD-pass in the ’91 Grey Cup game, while having 100-yard outings in both the ’96 and ’97 games. He was named the Most Valuable Canadian in the ’97 win over Saskatchewan.

The four-time all-star spent his entire 12-year career with the Argo and was honoured with a selection to the list of All-Time Argonauts.

In terms of getting maximum production from a later draft slot, the Argos best-ever draft pick probably came in 2001.

When Bucknell University linebacker Kevin Eiben was chosen, nobody expected him to become the dominant player he’d become.

A sure tackler, the Delta, B.C. native spent 11 seasons with the Argos, suiting up for 165 regular-season games, tied for 12th most in Argo history. His 703 career tackles rank second to only Mike O’Shea as an Argo (note – tackle records kept since 1987), while his 113 tackles in 2005 remains the league record for tackles in a season by a Canadian. Eiben was also a demon on special teams. 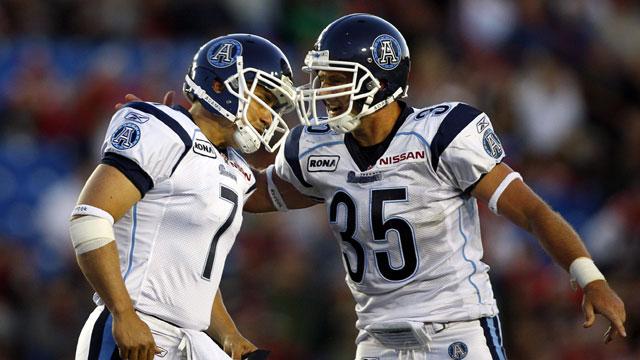 Eiben won a Grey Cup in 2004 and is currently the team’s linebackers coach and special teams assistant.

The Argos have chosen five players in this slot, yet none of them were able to put together a notable CFL career.

In fact, of the five athletes drafted 35th only one played any games, as 2018 selection Simon Gingras-Gagnon suited up eight times as a fullback/special teamer that season. 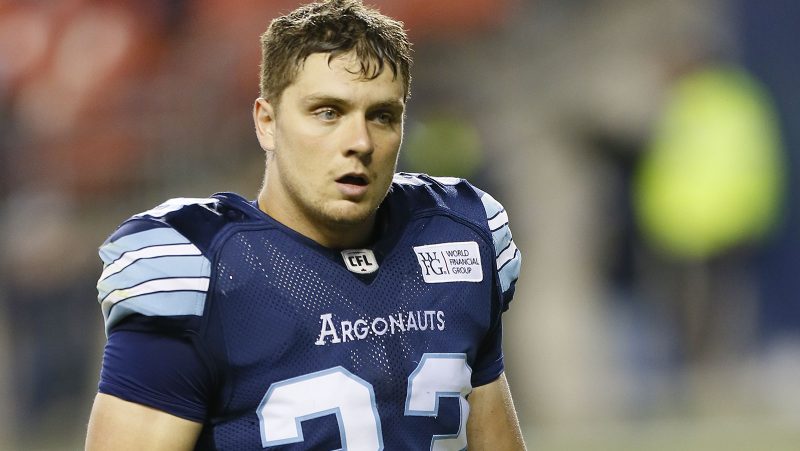 While it’s nine spots later, the Argos have had much more success with the 44th pick than the 35th.

Special teams captain Bryan Crawford was selected in this spot in 2005, while in 1994, popular receiver and two-time Grey Cup champion Norm Casola was also the 44th overall pick. Tyler Scott and Brad Smith were other receivers to be selected here.

The best player however came in the 1998 supplemental draft.

Noel Prefontaine was a kicker who could do it all. His kickoffs were deep, his field goals true, and his directional punting was the best in the league.

Only Don Moen played more games in Double Blue than Prefontaine, who took the field for 207 regular-season games. That number is even more impressive when you consider he was dealt to Edmonton in 2008 before being traded back to Toronto in 2010. He was a member of the 2004 and 2012 Grey Cup winners.

Lance Chomyc is the only Argo to record more points than the San Diego State product’s 1,228. Prefontaine had a seven field-goal game in 2003 and had consecutive field-goal streaks of 16 and 15 games.

“Pre” totaled 67,061 punting yards with Toronto, far more than any other Argo, and launched an 88-yard punt in 1999. His career punting average trails only Swayze Waters by anyone with at least 100 punts.

To be kind, these picks haven’t panned out. To be fair, there haven’t always been picks this late in the draft.

A total of seven players have been selected with those corresponding to the Argos final three picks, and they’ve played a grand total of two games, both by receiver Ian Forde from Waterloo, who was drafted in the 53rd spot in 2005.

There is one other tie though; Dave Waud was selected with the 71st pick of the 1983 draft. His son Daryl was chosen by the Argos with the 12th overall pick in the 2015 draft and spent three seasons here, winning a Grey Cup in 2017.

There are no guarantees in any draft, but with the right amount of preparation and a little luck, good or even great players can be found well into the draft. The Argos will cash in their lottery tickets on Tuesday night in hopes of hitting it big.