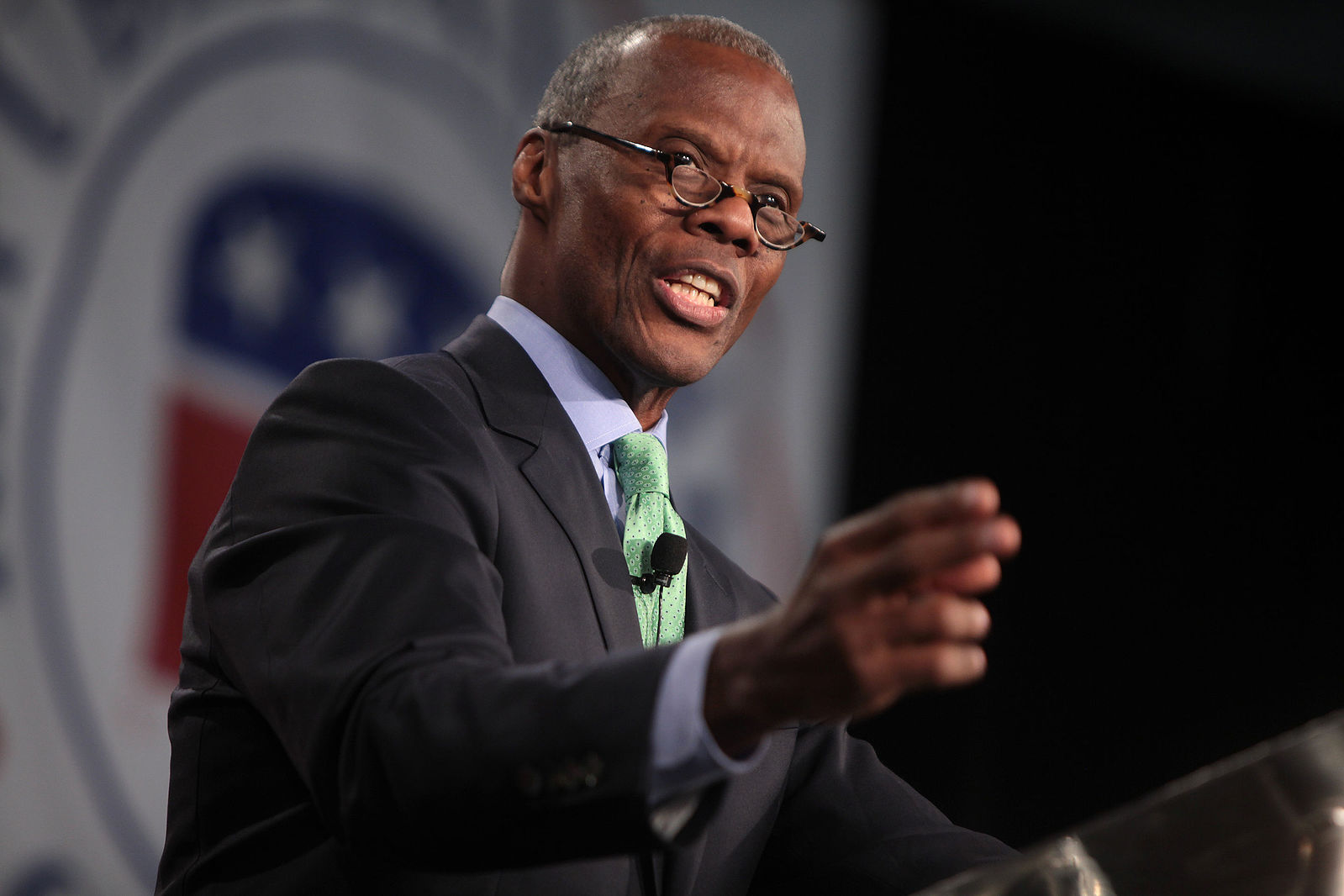 When your given name is Julius Caesar there are expectations.

“My dad’s initials were just J.C.,” he explained in a Zoom interview with Argonauts.ca. “That was not his given name and most people called him ‘Buddy’. When I was born my sister was reading about Julius Caesar and he thought it was kind of a neat name, so he pegged me with the name.”

Julius Caesar Watts Jr., known as J.C., was born in 1957 in Eufaula, Oklahoma. He’d showcase his athletic ability on the football field, demonstrate his faith as a minister, perhaps become best known as a Congressman, and now runs a television network that he founded.

Consider the lofty expectations attached to his name met.

To Argonaut fans of a certain vintage, Watts will be remembered for his one season quarterbacking the Double Blue, but his brief stay in Toronto is a virtual footnote in a rather remarkable story.

Watts first gained national prominence while playing quarterback at the University of Oklahoma. It was an exceptionally talented team, winning back-to-back Orange Bowls in Watts’ two years as the starter.

“We just didn’t throw the ball at Oklahoma. If you’ve got Billy Sims and David Overstreet and Stanley Wilson in the backfield, they’d cut your arm off if you’d throw the ball,” said a laughing Watts.

After his run at OU, Watts was drafted by the New York Jets. Like many Black quarterbacks of his era, he knew that his odds of becoming an NFL QB weren’t great.

“They did not draft me as a quarterback, they drafted me as an athlete,” he explained. “They had intentions of making me a possession type back, or special teams player, punt returner, kick returner, a little bit of running back…they had no intentions of playing me at quarterback.”

If there was any question about that, it was directly answered early on with the Jets.

“I went to the rookie camp. Walt Michaels was the head coach and I asked him what are my chances of playing quarterback? And he said, ‘Slim and none.’”

Hearing those words are upsetting. This happened in 1981, not 1861. Somehow, showing the grace he would display throughout his playing days and into his post-football careers, Watts somehow kept his cool.

Watts was in full reflective mode at this stage, looking back at the success of his Black peers in the CFL, noting that when he played here seven of the nine teams had Black QBs on the roster. After a minute or so his train of thought headed back to the race issue in the NFL.

Like many before him – players such as Chuck Ealey, Jimmy Jones, Condredge Holloway and Warren Moon – Watts headed to Canada. He was thrilled to join the Ottawa Rough Riders because that’s where Holloway – one of his biggest idols as a young man – played.

But by the time Watts arrived in Ottawa, Holloway was in Toronto. Becoming teammates with the man he so admired would have to wait a few years.

While playing with the Rough Riders, Watts almost led his team to what would have undoubtedly been among the biggest upsets in Canadian football history. The Riders advanced to the Grey Cup game despite being a 5-11 team. They had pulled off consecutive upsets of the Montreal Alouettes and Hamilton Tiger-Cats, but that meant David had to face Goliath in the championship final.

Hugh Campbell’s Edmonton team had won three straight Grey Cups, finished the 1981 season with a 14-1-1 record, and was favoured by over three touchdowns in the championship game. Someone forgot to tell the Riders they were supposed to get blown out.

Watts led his team to a 20-1 halftime lead, leaving 52,487 fans at Montreal’s Olympic Stadium, not to mention a huge national television audience, shocked. The second half was not so kind to the Riders as Edmonton stormed back, winning the game 26-23 on a 27-yard Dave Cutler field goal with just three seconds left in the game.

While he was named the game’s offensive MVP, Watts has never forgotten the impact of that loss.

The first was in a high-school game, a state championship semi-final. His team was favoured but couldn’t score a touchdown from the two-yard line and lost by six points. The other “right now” moment happened in the ’81 Grey Cup.

“We were a rag-tag football team. We got into the playoffs, we caught fire at the right time, we beat Montreal, we upset Hamilton with Tom Clements, and then it was Edmonton. We led 20-1 at halftime and we lose the ballgame by a field goal. It was a ‘right now’ moment and we didn’t get it done.”

Consider the loss a lesson learned and an opportunity to turn a gut-crushing negative into something positive.

“The lesson learned from those things is having been there you recognize the ‘right now’ moments and you repeat to yourself I’m not going to lose this deal. I’m going to make sure I get this done. I know how to incentivize or motivate or inspire the team – if it’s a team of 2 or a team of 32 – to say there’s no tomorrow, we’ve got to get this done right now.”

After a handful of seasons in the Capital, Watts found his way to the Argos and had the chance to play with the man he so much admired; Holloway. He remembers that connection with Condredge as his most cherished memory from his days in Double Blue.

“It was quite a thrill for me to be on the same teams as Connie,” said Watts. “I was in the seventh or eighth grade and Condredge was a Black quarterback at the University of Tennessee. It wasn’t Alcorn State, it wasn’t Grambling, it was a major college in the SEC. He was sexy. He was small, he was quick, he could throw the ball, he could move around, make people miss him, shake and bake; he was fun to watch. Now, all of a sudden, I’m on the same team as Condredge Holloway. Connie and I became friends and I still check in with him maybe once or twice a year.”

Watts would take over from Holloway and help guide the Argos to a first-place finish in the East, only to lose a two-game total-point series to Hamilton. When the season concluded, so did Watts’ football career. The man who called signals for most of his life was about to find another calling.

J.C. became Reverend Watts to many as he followed his calling to be a Baptist minister. He had become a youth minister after hanging up the cleats and was ordained in 1993. A year later he would change careers yet again. 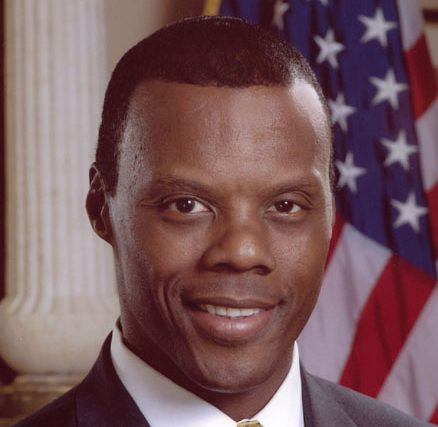 Watts grew up in a Democratic household but would enter the political field as a Republican. He won a state election in 1990, then in ’94 ran for U.S. Congress. It was a gamble by the Grand Old Party as a Black Republican from south of the Mason-Dixon line had never been elected to Congress. That changed as the Oklahoman won the first of his four Congressional elections.

He defied the odds in 1990, running not only against a Democrat, but against history. That prospect was not intimidating to him.

“It wasn’t, and it wasn’t for two or three reasons,” he explained. “One, I’ve always been pretty comfortable with me. I can’t be a good Condredge Holloway, but I can be a good J.C. Watts. I’ve never bought into the group identity thing that says that because we’re all Black we have to think alike, because we’re all white we have to think alike. I don’t think I have to think like my siblings just because I’m a Watts. Group identity in and of itself is not a bad thing, but when the group says two plus two is seven, and you raise your hand and say ‘Hey, two plus two isn’t…’ (and the reply is) ‘Ya, we know that, but we’ve got to go along to get along.’ I’ve never been that kind of guy.”

“I’ve just kind of created my own trails, if you will, my own path. I think sports probably encouraged that mentality. When I was a Democrat, I didn’t agree with all the things that the Democrats did, which got me in trouble. As a Republican I disagreed with many of the things Republicans did and today I don’t recognize the party at all.”

Watts’ became a prominent member of the G.O.P., so much so that he was chosen to give the Republican Party’s response to Bill Clinton’s State of the Union Address in 1997.

The second of those accomplishments was a bipartisan effort with another high-profile Congressman, but a Democrat. The result was something that has not only added to the Washington D.C. landscape, but to the American mosaic.

The spectacular museum is located on the National Mall, a mere football field northeast of the Washington Monument.

“In the United States we all, regardless of skin colour, have had to come from a long way back, but I say with great humility that none have had to have come from as far back as the Black community. The museum tells the story of African Americans coming over, history, slavery. There’s a strong historical tie with the Black community in Canada because of the Underground Railroad and Harriet Tubman.”

In 2001 it was Watts and Lewis along with Senators Sam Brownback (R) and Max Cleland (D) that kickstarted efforts to develop the museum and find the funding for it. Ground was finally broken in 2012 and the museum opened its doors in 2016.

Watts made a tough call and stepped away from politics in 2002, a decision made even more difficult because civil rights icon Rosa Parks wrote to him and said she hoped he’d remain in politics, saying she was glad she stayed in her seat in Montgomery in 1955 and wished he would keep his seat in Congress.

He’d work as a lobbyist, become the head of Feed The Children, and then found something that keeps him busy today; Black News Channel (BNC). After 15 years of trying to get investors and get the network off the ground, BNC launched in February 2020 and focuses on issues that impact the Black community.

Watts is the founder of the network and acts as its chairman. The network’s debut came in time to talk about an issue that was discussed at length that summer.

“After George Floyd, after Ahmaud Arbery, Breonna Taylor; Black people had a venue to enter into talk about perspective. I could have told you from my experiences as a kid growing up – my dad was a police officer, so I’m not throwing police officers under the bus by saying this – but it’s just a fact that Black people have had a different relationship with law enforcement in America than most people in the white community. Having a venue to tell the rest of the story or to give another perspective concerning the Black community, I think it was helpful.”

Being helpful has perhaps been the most defining quality of Watts’ life, but so has his guidance. Whether it be aiding his teammates, giving spiritual counsel, enacting legislation, or giving Black issues a voice; the modern-day Julius Caesar was born to be a leader.