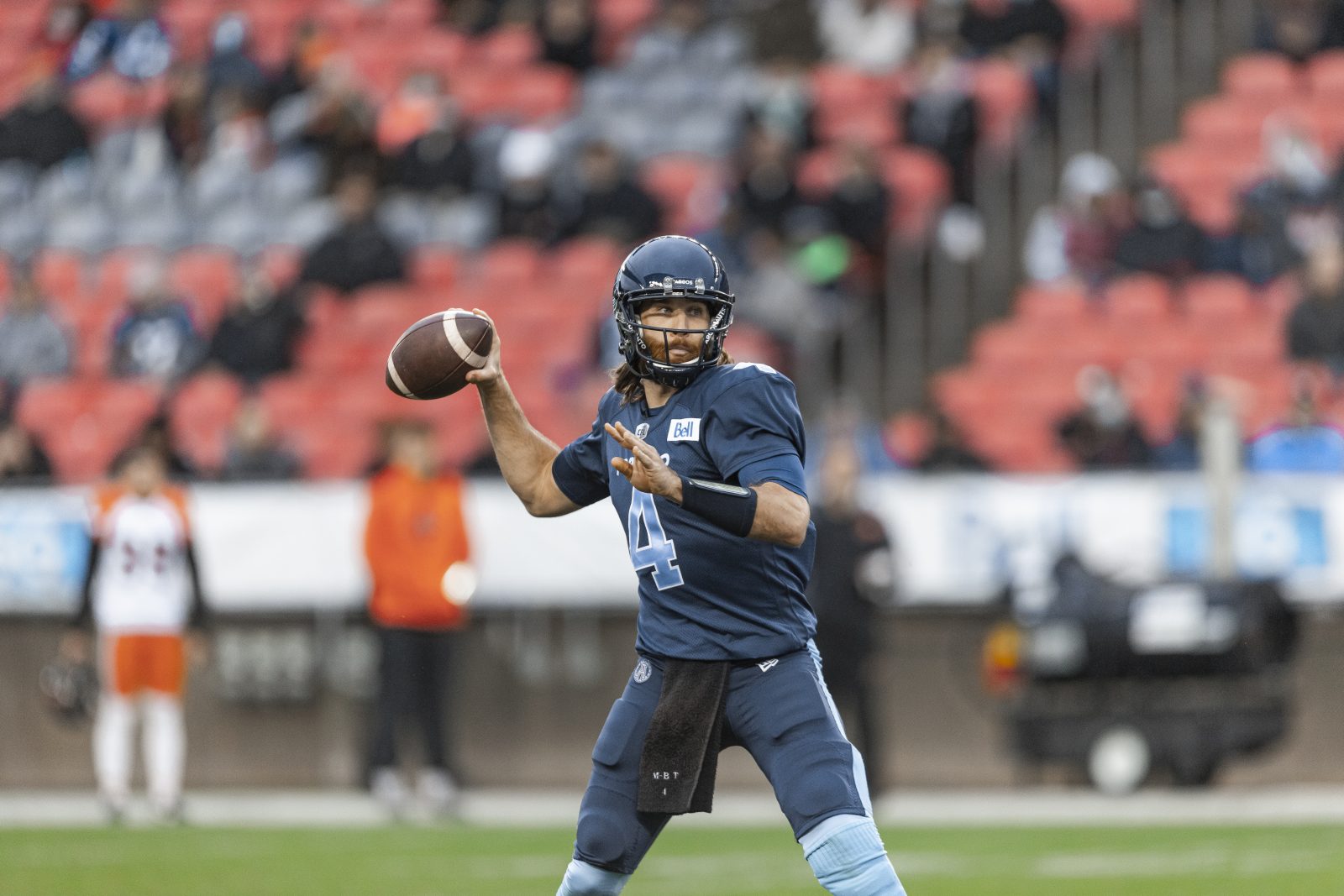 TORONTO – The Canadian Football League announced 2021 East and West Division All-Stars today and seven Toronto Argonauts were honoured in the East including QB McLeod Bethel-Thompson, WR Kurleigh Gittens Jr., Centre Peter Nicastro, DL Shawn Oakman, LB Chris Edwards, DB Shaq Richardson and K Boris Bede. This is the most All-Stars the Double Blue have had since 2017, when they had 10. 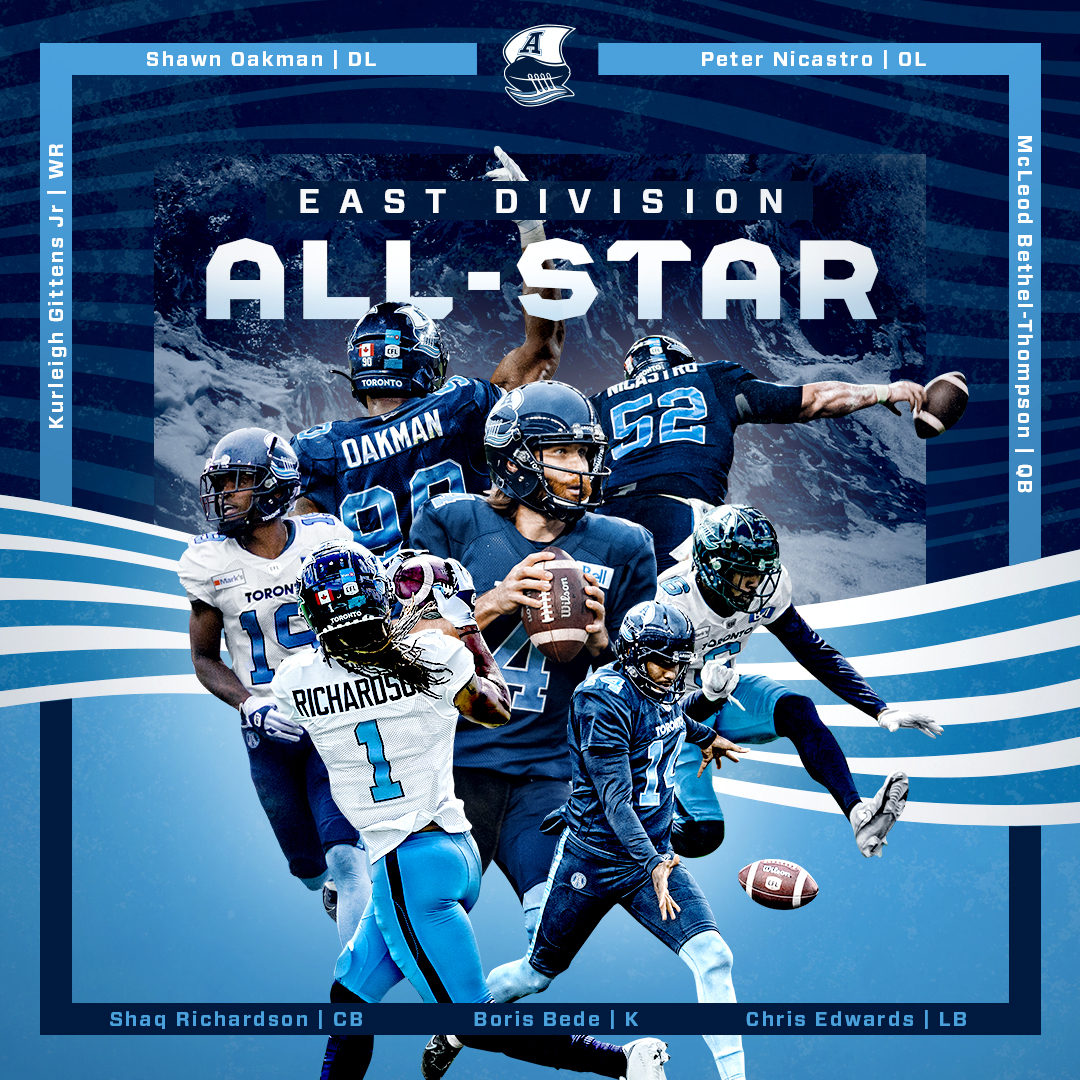 Bethel-Thompson suited up for 14 games in 2021, starting nine, while going 203-for-306 for 2,303 yards and 12 touchdowns. The 2019 CFL passing touchdown leader (26) was 7-2 as a starter and helped guide the Argos to nine wins this season and first place in the East for the first time since 2017. The California native and four-year Argo became the seventh-leading passer in Boatmen history this season and has thrown for over 8,500 career yards. MBT is also Toronto’s team nominee for Most Outstanding Player.

Gittens Jr., Toronto’s 23rd overall selection in the 2019 CFL Draft, truly broke out in 2021 hauling in 50 catches for 605 yards and four touchdowns. The Wilfrid Laurier product finished 15th in CFL receiving yards and second amongst Canadian pass catchers. The Ottawa native leads the Argos in touchdown catches and is second in yards behind Ricky Collins Jr. The 5’11, 191lb receiver had only one catch in 2019 but stayed dedicated to his craft during the cancelled 2020 season and his hard work paid off this season. Gittens Jr. is the Argos nominee for Most Outstanding Canadian.

Nicastro, Toronto’s first-round pick (seventh overall) during the 2021 CFL Draft, was forced into action early in his CFL career and played like a seasoned veteran from day one. The Calgary native started at left guard week one and held that position for four games before an injury to starting centre Phil Blake forced Nicastro into snapping duties. The 6’2, 305-pound lineman started the next seven games at centre before an injury ended his rookie regular season. Starting 11 games your rookie season at two different positions for a first-place team is quite an impressive feat for the 22-year-old. Nicastro is also the team’s nominee for Most Outstanding Offensive Lineman and Most Outstanding Rookie.

Edwards was all over the field in his first season with Toronto, posting 38 total tackles and three sacks while intercepting three passes for a league-high 162 yards and two touchdowns. The four-year CFL veteran’s three picks were a career-high and tied for third most in the league this season. The 28-year-old played all 14 games this season and was tied for first on the Argos in interceptions, tied for second in sacks and fourth in total tackles.

Richardson shut down opposing receivers all season long and racked up 37 total tackles, three interceptions, two forced fumbles and one fumble recovery in 14 games played. The second-year Argo and four-year CFL veteran finished tied for first on Toronto in interceptions, led the team in forced fumbles and was fifth in total tackles, one behind fellow All-Star Edwards. The Arizona product had a game-sealing interception in week one against Calgary and a late dagger in week eight after intercepting Vernon Adams of Montreal with less than five minutes remaining in a one score game, leading to a field goal and a win.

Bede, the six-year CFLer, had a sensational season in 2021 making 28-of-33 field goals (85%), including six from 50+ yards, three better than any other kicker in the league this season and two off the all-time record. The CFL’s all-time leader in kickoff average once again led the league in that category with an average of 67.4, including one 95 yard boot. The Laval product’s most iconic moment in 2021 came in week 10 when he launched a 51-yard bomb right down the middle of the uprights as time expired in a 24-23 Argos win at Tim Hortons Field against Hamilton. Bede was named a Top Performer in week 13 after kicking five field goals including two from 50+ in a win vs. B.C. Bede is the Boatmen’s nominee for Most Outstanding Special Teams Player. This is Bede’s second East All-Star nomination.