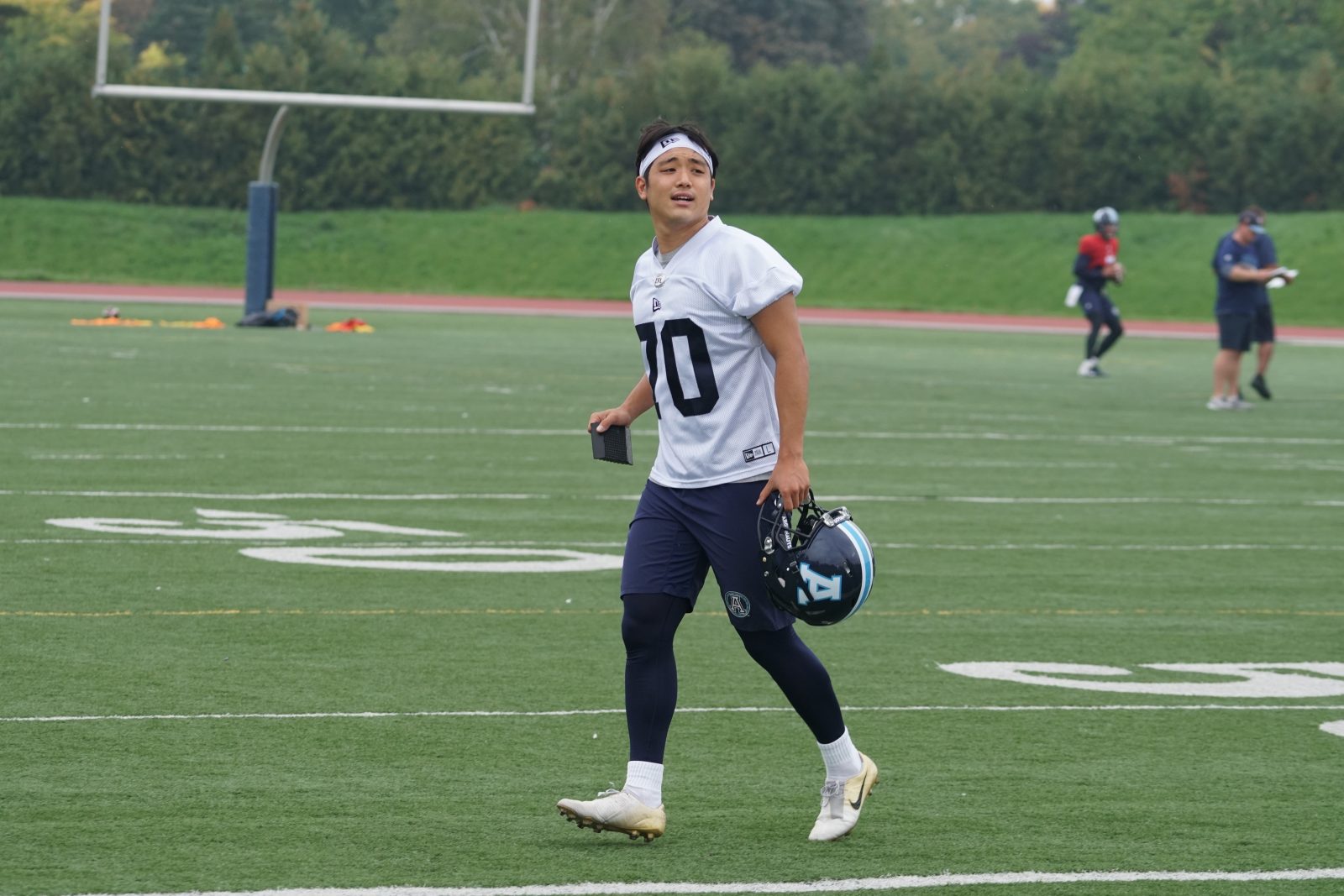 The daily football life of Toronto Argonauts kicker Toshiki Sato has at times been a lonely one. If you were to attend a practice, Sato, known as Toshi to his teammates, could be seen tucked out of harm’s way, working on his kickoffs, his punting, or his footwork.

He’s been leading the life of a backup kicker; not much to do and just waiting for a chance to show off his ability in a game.

That opportunity comes Tuesday night when Sato replaces Boris Bede as the Argos host the Edmonton Elks. It’s a game that means nothing in the standings as the Double Blue have already wrapped up first place and home field for the Eastern Final on December 5. The situation gives the Argo coaching staff a chance to look at some of the players who haven’t started, or even dressed this year.

One of those players is Sato.

“I’m so excited,” Sato told Argonauts.ca. “Mostly excited; of course I’m a little nervous, but I think I can handle the nervous (feeling), then I’ll be fine. I think everybody gets nervous, even NFL kickers. That’s the most important thing, how to handles the nerves.”

It’s not like the 28-year old hasn’t faced a situation like this before. Back home his Waseda University team advanced to the national finals, while as a pro in the X League he set a league record with a 58-yard field goal in the championship game while playing for the IBM Big Blue. He was named the All-X League kicker in 2019.

He’s also spent time in the states kicking for the Austin Generals in The Spring League, so he’s been in the spotlight in the past. It’s also pretty obvious that his placekicking is not an issue in the slightest.

The person on the Argos best suited to evaluate Sato agrees with that assessment.

“He’s a good field goal kicker, we know that,” Bede said of his protégé before revealing which area Sato has worked the hardest. “Punting; his directional punting. He’s been able to hit the ball but coming to a Canadian field you’ve got to go a little bit wider in your stance and on your angles to be able to hit outside the numbers.”

In a separate conversation, Sato agreed that the transformation to the Canadian game has been the biggest adjustment.

“I’m getting used to the rules,” he explained. “In the CFL, it’s a directional kick. With kickoffs and punts there’s more direction than the Japanese or American style. Also punting; mainly I’ve been a kicker outside of Canada, so it’s not easy to get better as a punter here. I’m sure I’m getting better because I’m doing a lot of punting here.”

There’s one aspect of punting that has him working the hardest.

“Mostly it’s the movement from catching to punting, from hand to foot. I have to get used to that.”

It’s obvious that English is not Sato’s first language. At times he pauses to make sure he finds the right words, which he does more often than not. He’s become part of a team that welcomes his contributions and is more than happy to have him on board as he continues on his journey to become a starting pro kicker.

What may benefit Sato the most on that quest is being able to witness Bede on a regular basis. The veteran excels at all-three disciplines of the kicking game; punting, placekicking and kickoffs.

Aside from being a role model, there’s something else Sato wants Argo fans to know about Bede.

“Boris is a good guy. We had a Japanese style dinner together. On the field he raises the standard as a kicker so I can chase that. It’s very good practicing with great kickers because they always raise my standards. Thanks to him I will never be satisfied with my kicking because there’s a better kicker next to me. He really helps me.”

The duo has a strong relationship. So, does Bede consider himself a big brother to Sato?

“Not a big brother, just a good teammate.”

Bede, along with every one of Sato’s teammates, will be over-the-moon happy for the rookie if and when he’s able to connect on his first CFL field goal on Tuesday night.