Lest We Forget: The Argos, George Bickle and the First World War 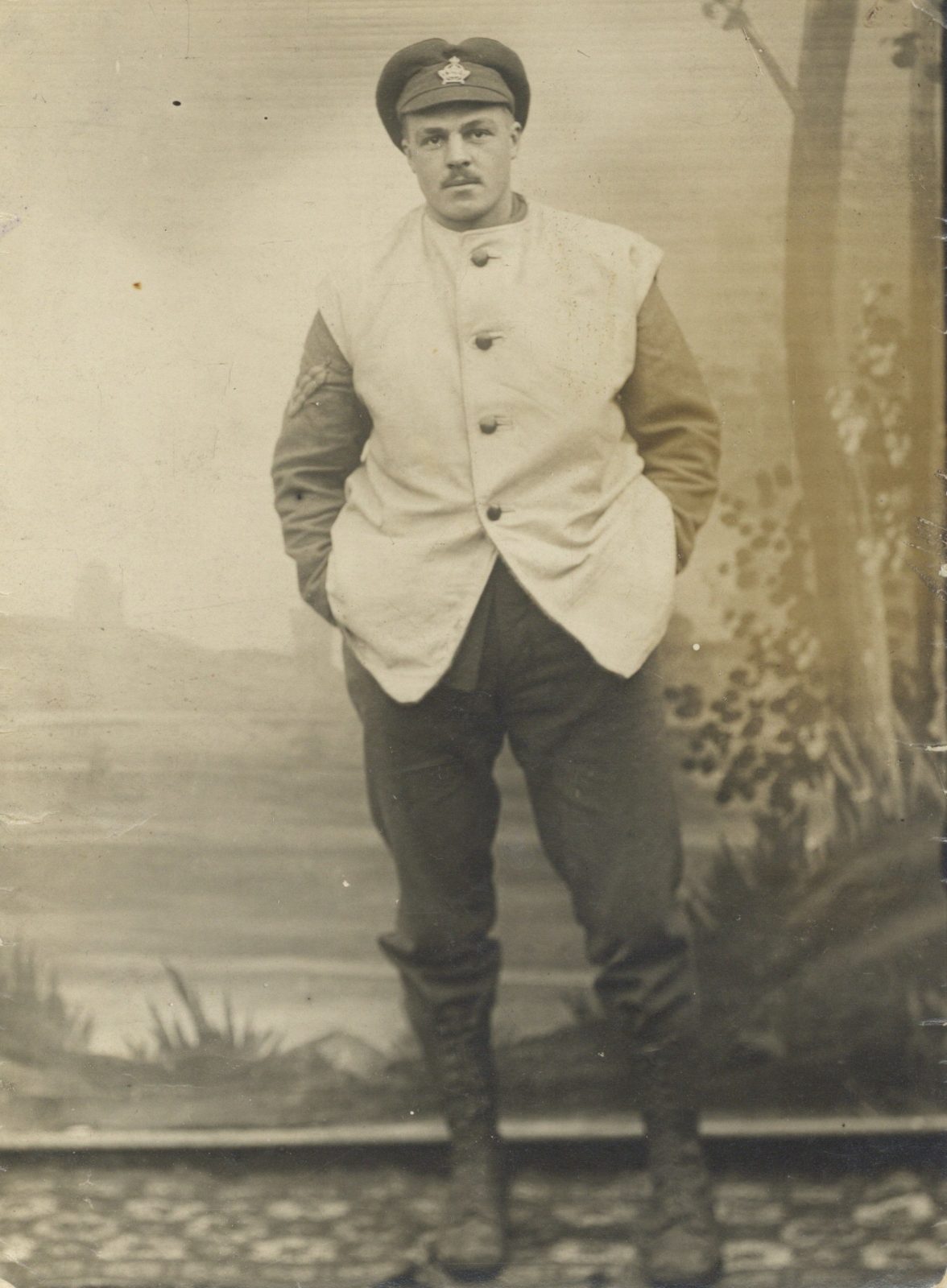 Lest We Forget: The Argos, George Bickle and the First World War

It’s gone now — even the intersection is gone — but a hundred years ago Toronto’s Central YMCA at the corners of Yonge and McGill streets boasted one of the top junior football programs in Canada.

In the fall of 1913, it was the turn of George Bickle, an eighteen-year-old halfback, to tread the well-worn path from the CYMCA juniors to the roster of one of the city’s senior football clubs.

The third son of parents Martha and William, Bickle was a Harbord Collegiate student when he earned his regular spot in the CYMCA backfield. A brother was an Argonaut Rowing Club member, but Bickle’s graduation to senior football took him into the west end, rather than to the ARC clubhouse at the foot of York street.

Since organizing its first senior team in 1909, the Parkdale Canoe Club had built rapidly on its respectable junior football tradition. That inaugural season the Paddlers won the Ontario league championship and went down battling in the very first Grey Cup game ever played.

Having finished the 1912 league season winless, however, the west-end club was looking to rebuild in 1913.

After successful tryouts George Bickle made the Parkdale first team. With this promising teenager holding down the left halfback position, the Paddlers reclaimed the league title and made their second trip to the Grey Cup game.

Travelling to Hamilton for the 1913 final, the Green and White were outclassed by the home-town Tigers, champions of the “Big Four” Interprovincial league. Still, when the dust had settled on his rookie season Bickle — who was still eligible to play junior, after all — must have taken pride in the positive reviews of his own play in his first Grey Cup appearance.

Then, with the outbreak of war in Europe in August 1914, the west-end club suspended its football program. George Bickle now decided to try out for the Argonauts, who played in the Big Four along with Hamilton, the Ottawa Rough Riders and the Montreal Winged Wheelers.

The Big Four was a step up in quality from the Ontario league, but that did not stop this talented teenager from making Dutch Huether’s Double Blue senior squad. In fact, Bickle had such a good training camp that the manager started him at centre halfback in the season opener.

Play revolved around centre halves in 1914 in the way it revolves today around quarterbacks. The smart money had been on sophomore Matt Gonter to start there after a solid rookie season at right half. Instead Huether gave the nod to the kid.

The smart money started looking even smarter after the budding CYMCA product fell flat in his debut, which ended in a disheartening 20-5 home loss to the Tigers at Rosedale Field.

Matt Gonter started at centre half the next week in Hamilton, where the Argos pulled off a shocking 7-5 win over the defending Grey Cup champs. In Week Three the Double Blue won comfortably in Montreal, and the prospect of Bickle getting another start anytime soon was fading fast.

In fact, Gonter and the Boatmen won their next three league games by a combined score of 110-9 to finish the Big Four season with a 5-1 record and deadlocked with the Tigers for first place.

Only the league champion advanced to the interleague playoffs in 1914. The Big Four duly arranged a tie-breaker game in Hamilton to decide the title, but the match ended in a 9-9 tie, darkness preventing overtime. It also ended with Matt Gonter sidelined with a season-ending ankle injury.

A second tiebreaker had to be arranged, this time in Toronto. With little other choice, Dutch Huether decided to start George Bickle at centre half for the first time since the very same Tigers humiliated him in Week One.

Presented with this opportunity for redemption, the teenager came through for the Double Blue with a big assist from the vaunted Argo defence, which smothered Tiger drive after Tiger drive all afternoon. Catching every punt flawlessly, Bickle repeatedly drove the frustrated visitors back with his booming punts, and the Boatmen ground out an 11-4 victory.

Seven days after dethroning Hamilton, George Bickle engineered a 16-14 playoff win over the Ontario league’s Hamilton Rowing Club. Pretty beat up after two harrowing games against their fiercest rivals, the Argos also experienced a dangerous emotional come down. Fortunately, their centre half knew the HRC team from his Parkdale days and got the Double Blue through.

For the Grey Cup game against the University of Toronto, Huether and his coaches decided to beef up. For Bickle, that meant riding the pine as the Boatmen upset the Blues 14-2 to capture the club’s very first Grey Cup.

The next spring, word reached the Bickles that their oldest sons Edward and Wilfred had both been wounded in action near the town of Ypres in the Flanders region of Belgium. The same fighting claimed the lives of thousands of young Canadians, including three former Argos: one-time star centre half, ex-captain and ex-manager Ross Binkley, who was killed by an exploding shell; former lineman and Olympic rower Geoff “Longboat” Taylor, who died of gas poisoning; and ex-quarterback Bill Jarvis, who was killed by a sniper.

Within three weeks a stunned Toronto learned of fighting outside the French village of Festubert and more fallen young men from the city, including former Boatmen Ardagh Coe and Art Muir. Leading his platoon in an attack on an enemy position, Lieutenant Muir reportedly got back to his feet twice after being struck down by machine-gun fire, before a sniper killed the former Argo lineman.

With such grievous news filtering across the Atlantic, George Bickle was called up to active service. While completing basic training at Niagara-on-the-Lake, he was courted by the Toronto Rugby and Athletic Association football club of the Ontario league. Placed back on reserve duty before football season, Bickle joined the TRAA. Two months later found him playing in his third straight Grey Cup game, a 13-7 loss to the Tigers.

That winter Bickle was mobilized and assigned to a cyclist battalion, whose primary roles involved reconnaissance and required tremendous physical fitness. Corporal Bickle arrived in France in March 1916 and spent the next nine months on the Western Front, becoming involved in six major military operations along with the rest of the Canadian forces.

The fighting in 1916, including parts of the Somme offensive in September, claimed the lives of three more young men who had once suited up in Double Blue: ex-halfback Norman “Tout” Leckie and two of Bickle’s 1914 teammates, outside wing Errol Platt and scrimmager Colin Simpson. Also killed in action was George Boyce, a forty-two-year-old Toronto draftsman and Argonaut Rowing Club member who was a regular on the football staff, most visibly as goal judge.

Still relatively unscathed in December 1916, around Christmas George Bickle came down with a high fever, severe lower body pain and extreme fatigue. He was diagnosed in the hospital with trench fever, a louse-borne bacterial infection contracted by about half a million British and Empire servicemen during the war.

Most cases of trench fever settled down after a week or two of rest. Like the COVID-19 virus, however, the bacterium Bartonella quintana can cause long-haul infections. As fit as he was, Bickle’s symptoms continued to flare up for weeks, with periods of recovery followed by further relapses and hospitalizations.

To make matters worse, the young soldier began experiencing chest pain, palpitations and shortness of breath. Diagnosed with “disordered action of the heart”, Bickle was removed from active duty. For the rest of 1917 he would be in and out of the hospital for testing and re-evaluation as physicians tried to figure out what was ailing him.

In the meantime, four more former Argonaut players were added to what the Toronto press was calling the club’s “Roll of Honour”: Lieutenant-Colonel Russell Britton, who back in 1901 had quarterbacked the Double Blue to their first Dominion final; tackle and combat-pilot Fraser Bryans; ex-lineman “Smiling” Bill Brown; and scrimmager Doug “Pat” Patterson, another of George Bickle’s 1914 teammates.

By November 1917 physicians overseas seem to have concluded that Bickle was probably suffering from PTSD, or “shellshock”, as they called it then. The military found the young officer an instructor’s position at the Canadian Training School in the village of Bexhill in the English county of Sussex, and he saw out the rest of the war there.

Those final twelve months of fighting claimed the lives of five more one-time Boatmen: lineman Hugh Hoyles; scrimmager Duff Wood; outside wing Basil Lepper; and two ex-Argos, Stan Réaume and Gander Addison, who were killed in action on the same day outside the French city of Cambrai, a mere forty-two days before the Armistice was signed on November 11. Lieutenant Lepper was another of Bickle’s 1914 teammates — the fourth member of that Grey Cup winning squad to lose his life on active service.

George Bickle’s health mercifully improved in Bexhill. What his physicians may have made of that is not recorded in his service record, on which this article has depended for information about his overseas experiences. All that can be said with confidence is that Bickle’s overall health appears to have been far more precarious at the end of the war than it seemed.

Back home in Toronto, he felt fit enough to resume his football career in the fall of 1919. Returning to the TRAA team, by all accounts he had a strong season. The Black and White went undefeated in the Ontario league, earning their star centre half his fourth straight league championship with three different clubs.

That winter Bickle remained fit and active, playing house-league basketball at the Central Y, a sport that he had been playing there since high school.

Then came a dramatic deterioration in his health. By football season he was reported to be critically ill with heart trouble. With Bickle out of action his position in the TRAA backfield was assigned to another CYMCA product — a teenager called Lionel Conacher.

George Bickle was twenty-five when he died on November 3, 1920. One press report attributed his shocking death to “being gassed while overseas”. His service record provides no evidence to support this report, which remains unexplained.

The official cause of Bickle’s untimely death, as recorded by his own physician, was “heart infection”. Physicians today, with the benefit of years of research on B. quintana infections that his doctors had to do without, learn that heart infection (endocarditis) occurs frequently with long-haul cases of trench fever.

Considering that George Bickle was diagnosed with heart trouble after weeks of battling trench fever, and considering that endocarditis was recorded as the cause of his death, historians today can feel pretty confident that this young Toronto football star died from complications of the B. quintana infection he contracted in the trenches in December 1916.

It seems, therefore, that there was a fifth member of the 1914 Grey Cup champion Argonaut squad who died as a First World War casualty. He was not “killed in action” like his teammates, but the tiny insects that infected him with trench fever while he was serving his country set a deadly time-bomb ticking in George Bickle’s veins that cruelly waited four years to take his life.

For Canadians this Remembrance Day, the George Bickle story serves as a poignant reminder that not every Canadian who gave their life in the First World War found a final resting place in a Flanders field strewn with poppies.

For some, the guns had long since fallen silent and the ink had long since dried on the newspaper “Rolls of Honour” before their time came to make the supreme sacrifice.

Like others who served their country in that war — and who have served in every one of its wars — George Bickle, talented athlete, one-time Argonaut, Grey Cup winner, and beloved brother and son, returned home more gravely afflicted than anybody — than even he — recognized.

May every Canadian who serves in uniform find the understanding, the support and the healing that they deserve.