Hogan: Brescacin back for the Boatmen 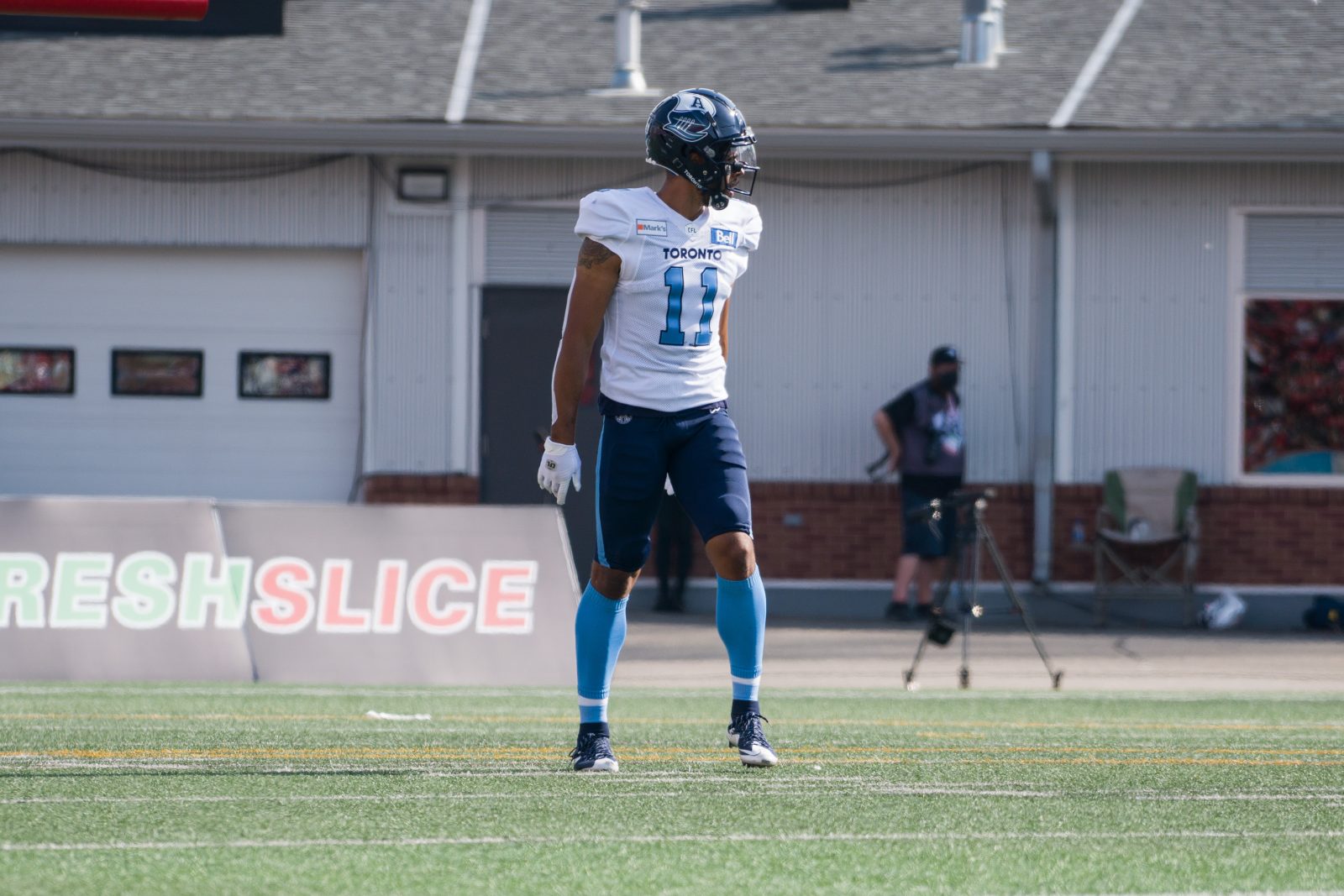 Hogan: Brescacin back for the Boatmen

It all seemed normal. The Toronto Argonauts were in Winnipeg back in Week Two, trailing the Blue Bombers by two scores with a minute-and-a-half left in the fourth quarter. Quarterback Nick Arbuckle hit first-year teammate Juwan Brescacin with a pass.

What then happened was anything but routine.

“I was running a crossing route,” Brescacin recalled for Argonauts.ca. “I tried to turn upfield and got tackled awkwardly. My leg was kind of overextended, I rolled my ankle and hyperextended my knee. As soon as I felt my knee go, I just knew that it was something different because of the pain that I felt.”

It was. For the second time in as many seasons, Brescacin had suffered a substantial leg injury; he missed most of the 2019 season while a member of the Calgary Stampeders.

“There were a lot of emotions,” he said of his realization that this was also serious. “The biggest thing that I thought about was how much work I put into getting ready for the season. For it to happen like that, at that point in the game, was tough. But for some reason, when I got onto the plane I knew I would be back.”

He is back and will suit up for the Argos for the first time in 85 days when the Boatmen play in Ottawa on Saturday afternoon.

The 28-year old Mississauga native is thrilled to be playing again. The return has him in a good mental state, though that wasn’t always the case during his rehabilitation; ironic given the amount of work he’s done online to try and make sure others are doing well mentally. 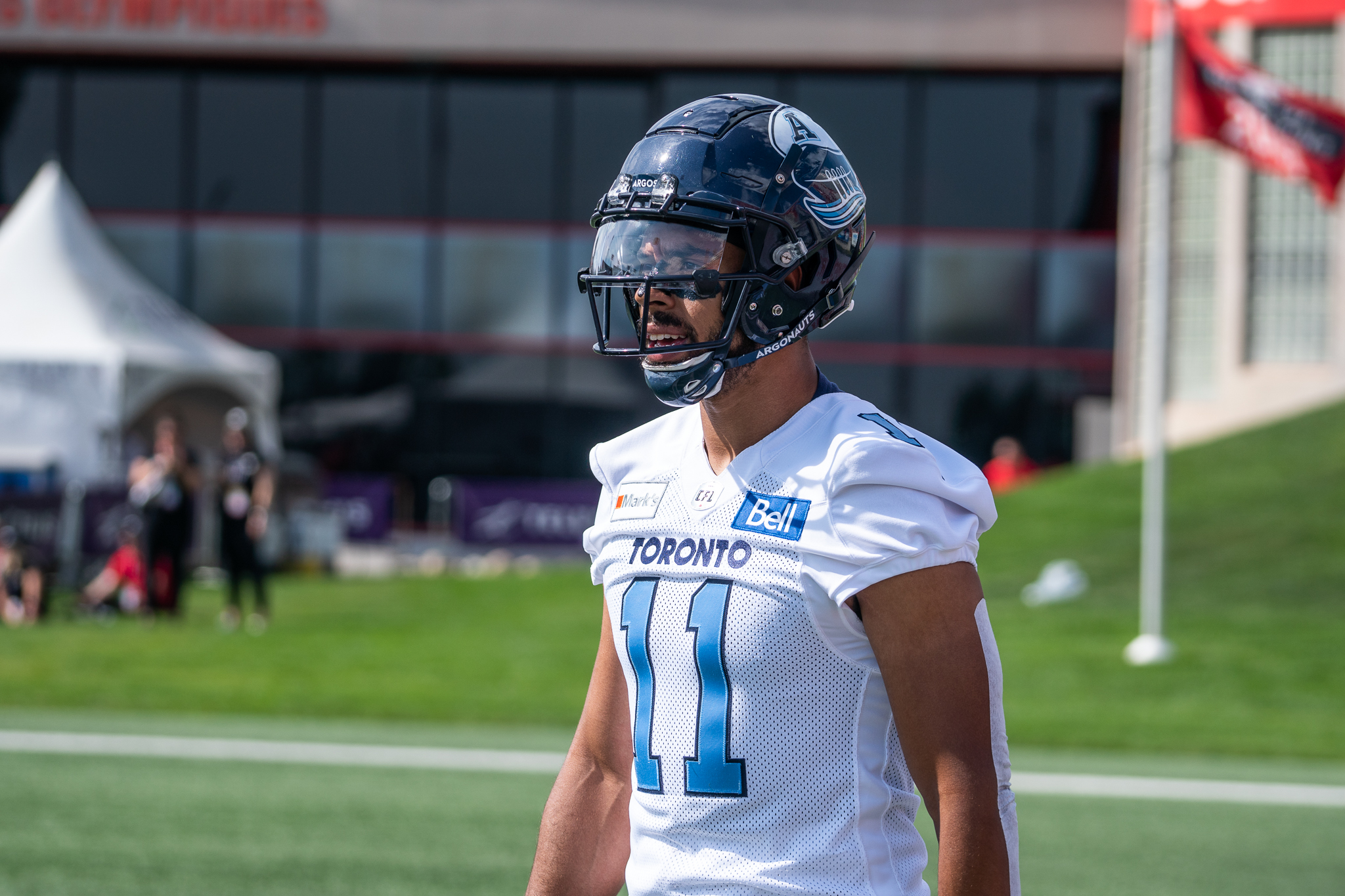 “I’m not going to lie, it wasn’t easy,” he confessed. “People were asking me how my knee was, but they weren’t asking me how I was doing mentally. That was tough because during those times you feel like you’re the only one that feels like you feel and it’s hard to get people to understand. But every day my teammates would come into the locker room they would tell me that they were praying for me. Pinball (General Manager Michael Clemons) and some of my teammates prayed for me after the game when I was hurt. Having that positivity around me made it easier for me to put the work in.”

That’s the part of the process that fans don’t see. It’s never a case of an injured athlete simply sitting around and waiting for the injury to heal itself. Brescacin worked his tail off in an effort to return to the lineup as soon as possible.

“I was in the weight room with our strength and conditioning coach (Usama Mujtaba) during meetings, during practice, after practice, just trying to get back as fast as possible, but also being smart. Constantly having the coaches ask me how I’m feeling gave me positive reassurance because I felt like they valued me as a player, but they weren’t trying to get me to come back too fast, which I know happens sometimes.”

His patience has paid off, and while not listed in the starting lineup against the Redblacks, Brescacin will undoubtedly see the field for just the third time as a member of his hometown team. The way that the team spreads the ball around there’s a good chance he will have at least one catch on Saturday.

“I don’t know, it depends on what it is because my first catch of the season was a touchdown,” he replied, sporting a huge smile. “If it’s a touchdown that will be great. It will just feel good. I feel as a receiver when you get your first catch of the game you feel like ‘Okay, I’m in the game now.’ I’ll be excited, but I probably won’t show it that much. But if I don’t get a catch, if I’m in the blocking game, I just want to be able to contribute and hopefully we take care of business.”

The exceptionally important two points is the main reason for the trip to the capital, but the return to the lineup of players like Brescacin, Cameron Judge and Shane Ray provides a shot of adrenaline for a team that has had more than its fair share of injuries this season.