Recap | Argos win with TDs in all three phases 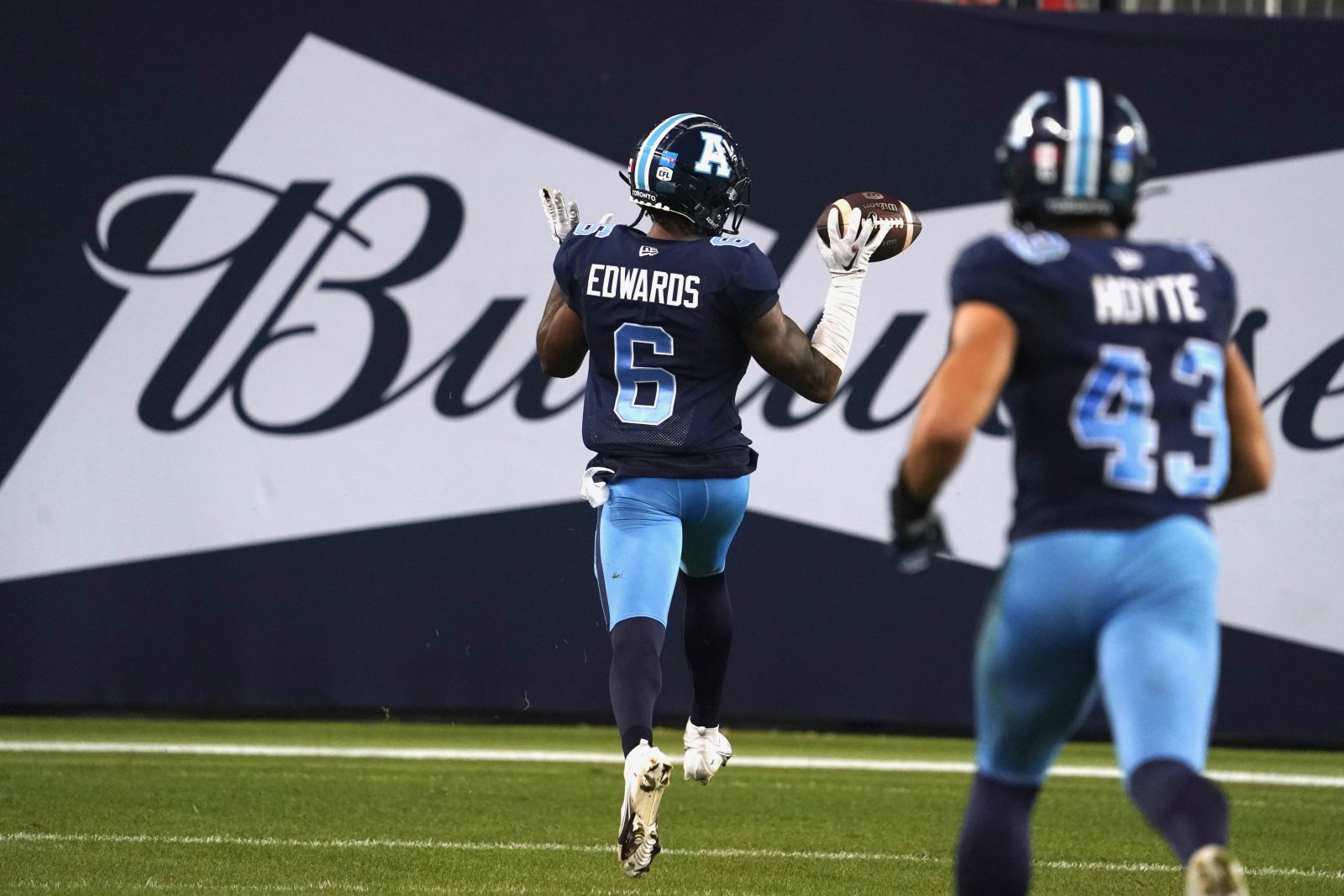 Recap | Argos win with TDs in all three phases

TORONTO — The Toronto Argonauts put up 27 third-quarter points and scored in all three phases to claim a 35-16 win over the Ottawa REDBLACKS on Wednesday night.

The division-leading Argos improved to 5-3 on a night that saw BMO Field host a celebration to honour the 30-year anniversary of Toronto’s 1991 championship run. Toronto is now 4-0 at home this season.

The REDBLACKS led 9-8 entering halftime, but the Argos surged ahead with a dominant third quarter that included a 63-yard touchdown by D.J. Foster and a pair of pick-sixes by Dexter McCoil and Chris Edwards.

Toronto also had a special teams touchdown on the night, with Dion Pellerin blocking a punt that was scooped up and taken to the house by Dejon Brissett.

Making his second career start for Ottawa following a historical debut victory, rookie quarterback Caleb Evans completed 23-of-41 passes for 334 yards and was picked off three times. The 23-year-old also led Ottawa in rushing with six carries for 54 yards.

Bethel-Thompson quickly established a rhythm with four consecutive completions on the opening drive. Ottawa’s defence stood strong to force the punt, but Toronto got on the board after Boris Bede’s punt was downed in the end zone by REDBLACKS return ace DeVonte Dedmon for a single.

The small lead was short-lived, with Evans guiding Ottawa’s offence down the field on the following drive to set up a 28-yard field goal by Ward. Evans got the drive started with a big 22-yard rush after evading multiple Argo defenders.

Ward extended Ottawa’s lead early in the second quarter with another 28-yard field goal that was set up by key throws from Evans to R.J. Harris. The REDBLACKS’ leading receiver notched 38 yards on the drive — including a 28-yard play that saw him gain 15 yards after the catch.

Ottawa’s defence frustrated the Argos for the majority of the first half, forcing five punts and three straight two-and-outs. But Toronto’s special teams stepped up to fill the void late in the second quarter.

Toronto’s Dion Pellerin broke through to make a diving block on Richie Leone’s punt, and Dejon Brissett scooped up the ball for Toronto before accelerating to the end zone for the go-ahead touchdown. Bede kicked the extra point to give Toronto an 8-6 lead with just under four minutes to play before halftime.

The REDBLACKS’ offence responded in the final minute of the second quarter to reclaim the lead once again. A 26-yard catch-and-run by Harris helped set up a 32-yard field goal by Ward, putting Ottawa back on top with a one-point lead entering halftime.

Toronto retook the lead early in the third quarter on a huge screen pass to Foster, who proceeded to outrun the entire Ottawa defence for a 63-yard touchdown. Bethel-Thompson’s ensuing two-point conversion attempt was intercepted in the end zone by Brandin Dandridge, leaving the Argos with a 14-9 lead.

The Argos extended their lead later in the quarter with a pick-six by McCoil, who made the interception after Cordarro Law tipped an Evans pass at the line of scrimmage. McCoil sped down the left sideline for the 71-yard touchdown, and Bede added the extra point to put Toronto up 21-9.

Bethel-Thompson kept momentum on Toronto’s side with a 21-yard touchdown pass to Damion Jeanpiere later in the third quarter, and Toronto closed out the quarter with another defensive score. Chris Edwards picked off Evans and ran all the way to the end zone for the 82-yard touchdown, with Bede kicking the extra point to give Toronto a 35-9 lead.

The REDBLACKS notched a special teams touchdown of their own in the fourth quarter when Gillanders blocked a punt that was recovered in the end zone by Chagnon. Ward added the extra point to cut Toronto’s lead down to 19 points.

Evans had the Ottawa offence moving with under five minutes remaining before Evans was intercepted by Eli Mencer, killing a promising drive.

Ottawa and Toronto will both be back in action on Monday to close out Week 10. The REDBLACKS will travel to take on the Montreal Alouettes at 1 p.m. ET, while the Argos will face the Hamilton Tiger-Cats on the road at 4 p.m.