Hogan: Dinwiddie at the midway point of his rookie season 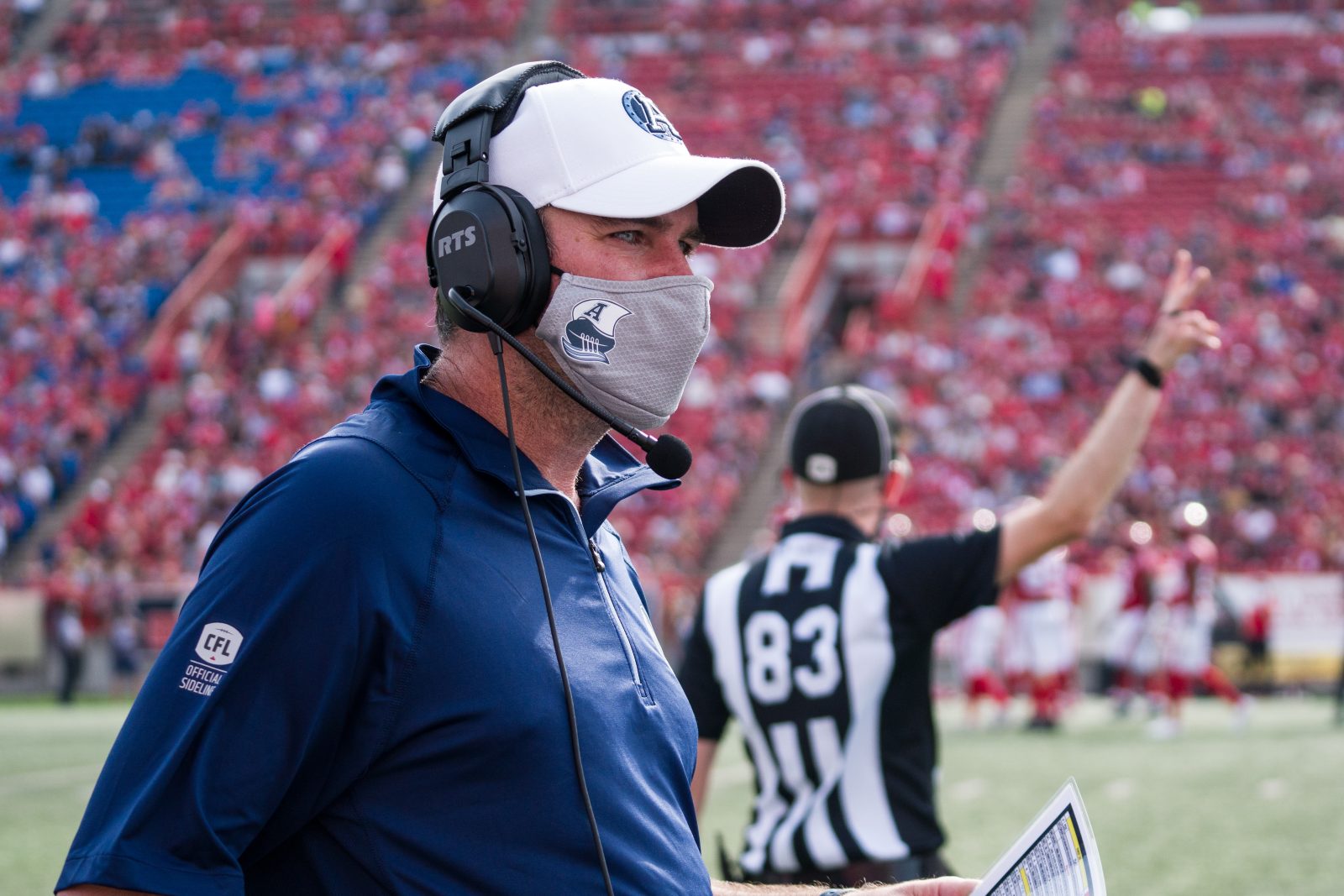 Hogan: Dinwiddie at the midway point of his rookie season

The Toronto Argonauts made many waves – most of them via big splashes – throughout the period between the end of the 2019 season and the beginning of the current campaign.

Few of the moves were met with an many raised eyebrows as the one on December 12, 2019 when the club announced Ryan Dinwiddie would take over as the teams 45th head coach.

The questions were multiple and mostly fair. He hadn’t been a head coach before. Heck, he only had limited experience as an offensive coordinator, but he was about to lead a staff that would very quickly put together a roster built to do one thing; win a Grey Cup.

“I was hoping we’d be a little bit better,” Dinwiddie confessed in a conversation with Argonauts.ca. “I think maybe 5-2, 6-1, but we knew it was going to be a tough first half of the season. We knew we had our work cut out for us. 4-3, we’re happy with that, but we know we’ve got a long way to go.”

There has been progress made in each area of the team, not unexpected with an unusually high number of players in their first year in Double Blue. The coach is particularly happy with the progression of the offence.

“I feel like we’re taking that next step to be an offence that can score in the high 20s or low 30s each week. We’ve just got to put it together. We’ve had our moments where we’re showing flashes of being really good on offence, but then we make too many mistakes. Penalties and turnovers have really cost us, but I think we took a step in the right direction (in their last game against Montreal).” 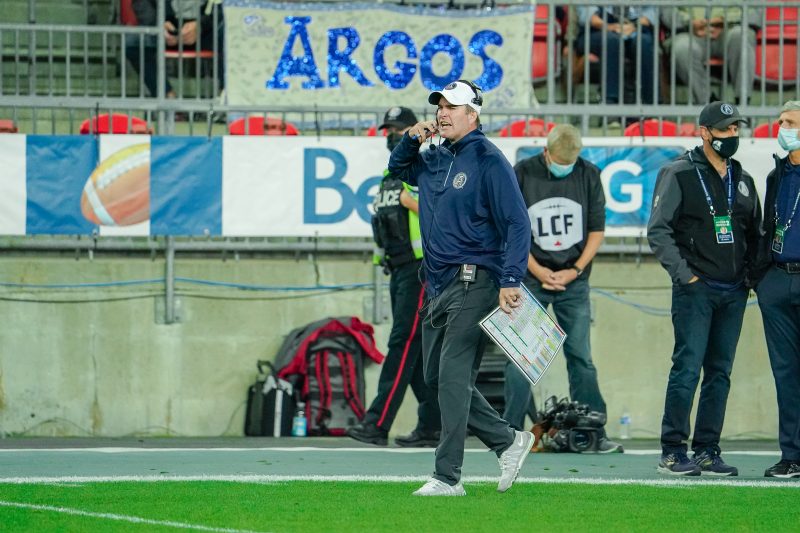 There has been a high number of injuries on both sides of the ball that has delayed the development of much-needed chemistry within each positional group, but the unstable roster has given some players a chance to play that may not have received the same opportunity with a healthy team. Dinwiddie is happy with the way the fill-ins have performed.

“They’ve come in and done what they needed to do. I feel like our younger guys rose to the occasion. Whenever we’ve asked someone to step up, they’ve done a good job. That’s helping them build for the future as well.”

The team’s depth is most evident at quarterback. Nick Arbuckle was the presumed starter but battled a nagging injury throughout training camp. Both he and McLeod Bethel-Thompson have played well enough to stake a claim to be QB1. The emergence of Antonio Pipkin in short-yardage situations against the Alouettes has muddied the waters even more.

“There’s the old line that goes if you’ve got two quarterbacks you don’t have one. I feel like we have two really good ones. I think sometimes you’ve got to do what’s good for the team and play the hot hand from time to time. You have to go with your gut and how you feel.”

Bethel-Thompson will start Wednesday night against Ottawa, with Pipkin in a back-up role.

“It was nice to get Pipkin out there and get him on the field for the first time (against Montreal) and show that he’s got a future. The other two are a little more polished and a little bit more experienced. We feel like we have three really good quarterbacks that can dress for us on game day.”

In a perfect world, all three quarterbacks would be healthy and would all be on the roster each week. It’s something the staff has considered doing but dressing the trio would come at a cost.

“It’s a topic that we’ve discussed each week,” he explained. “I just don’t think it’s the right thing to do as far as injuries go. If you dress the third quarterback and he doesn’t see the field, then we’re down one import (player), so if we have an injury in another area, then we’re really in tough. I would love to dress three. I wish the league would go back to that because I think it’s stunting the growth of these young quarterbacks.”

The club has improved defensively, though Dinwiddie was quick to point out that he’s been happy with the secondary from the start of the season. The biggest move has been on the sideline, where Defensive Coordinator Glen Young left the team and Chris Jones was added as a defensive consultant and is now calling the plays. The head coach is looking forward to seeing how that side of the ball evolves. 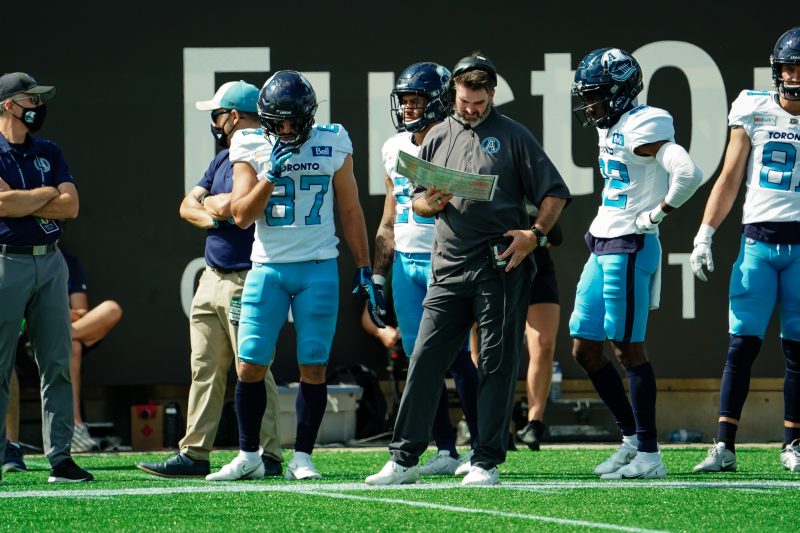 “I think it’s slowly going to change each week. Chris has a different mentality and is different schematically. He’s looking at what Glen did and will get through the first few weeks, make sure we teach it and not put our guys in a bad spot and have to learn a whole new defence right away, but eventually Chris will get away from this scheme and implement all of his stuff.”

The Argos have a game in hand on Hamilton and can move into sole possession of first place in the East with a win over Ottawa Wednesday night at BMO with a 7:30 kickoff time. The prospect of what lies ahead has Dinwiddie excited.

“We control our own destiny. We play Hamilton two more times and we have to find a way to at least get one of the two. I’m looking forward to (the second half of the schedule), it’s a chance for us to take the next step as a ball club and separate ourselves from the rest of the East.”

After the last couple of seasons, Argo fans are as excited as the head coach is about a stretch drive that begins against the Redblacks.