Hogan: Jones back in Toronto 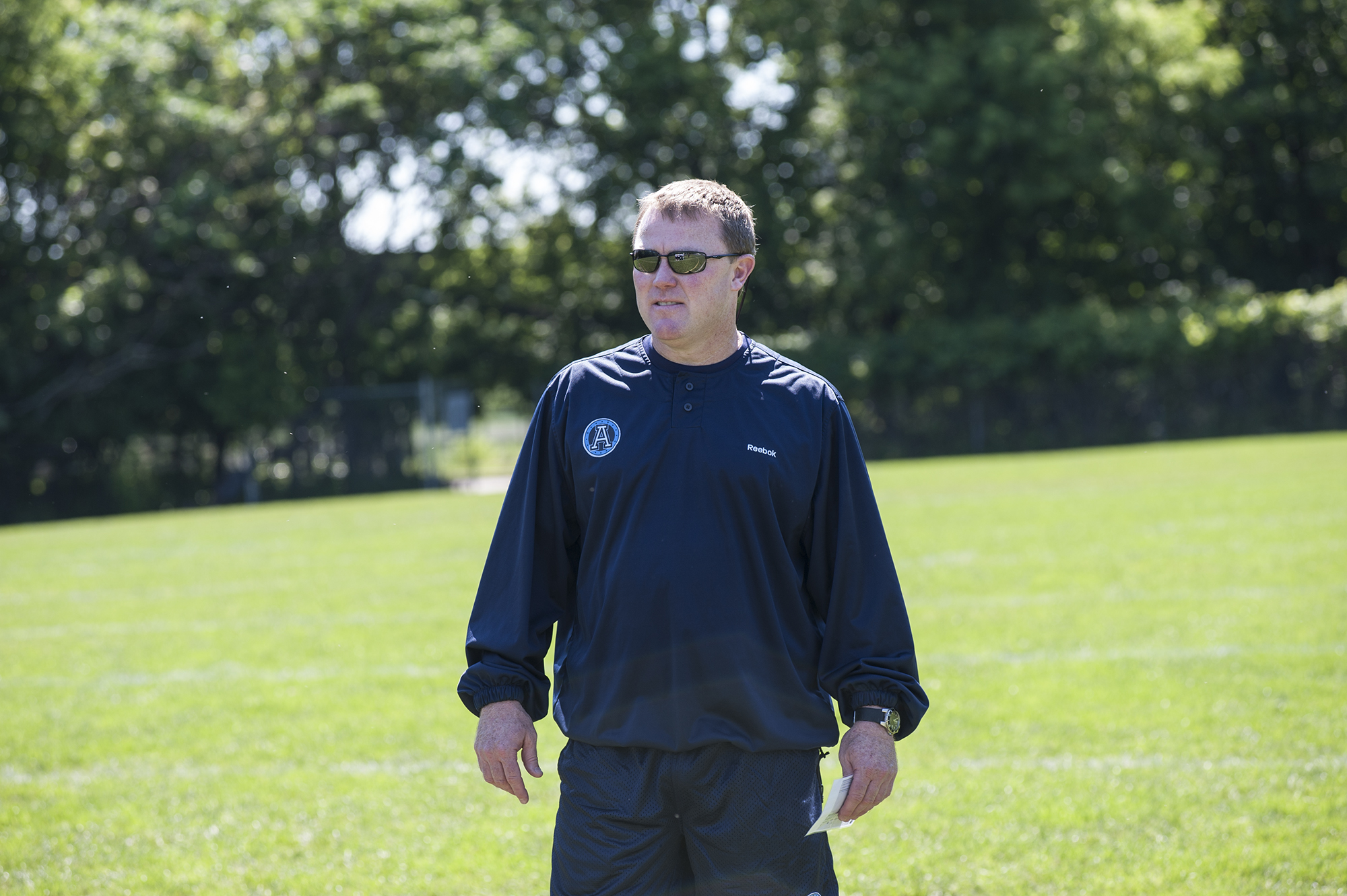 Hogan: Jones back in Toronto

It was evident that one of the most talked about coaches in recent CFL memory was back in business. As he patrolled the sideline during practice at Lamport Stadium, he had on a logoed black pullover instead of something in blue. His traditional sunglasses were on, and moments into his first day as a defensive consultant for the Toronto Argonauts, Chris Jones was already cursing out one of his players.

At that instant it seemed like he never left, but there was something different about the return to Toronto by a man who was an integral part of a star-studded coaching staff that led the Argos to the 2012 Grey Cup.

“I got rid of my boat,” he said, grinning broadly.

Jones went all in on the Boatmen theme when he last lived here, residing on a vessel moored in the marina at Port Credit. Between his sudden need for new accommodations and a substantially different Toronto skyline than when he left for Edmonton after the 2013 season, the coach still feels somewhat at home.

“It’s a lot nicer situation than we had,” he told Argonauts.ca during a conversation in a suite at BMO Field, reflecting on the bad old days of the trailers at Downsview, one of the team’s former homes.

You can excuse Jones for being a bit frazzled at this stage. His first contact from the Argos came just 10 days prior to his first practice. It was the day after the Argos win over Hamilton, and the day the team learned that Defensive Coordinator Glen Young and Defensive Backs Coach Joshua Bell had opted to return home for personal reasons.

“These guys are my friends,” he explained, his deep Tennessee twang dominating the conversation. “I’ve been keeping up with them all through camp, talking about what’s happening with the team. Then when the situation presented itself (to come to Toronto) it was pretty obvious that my family was very interested in me considering it. So, we sat down and we talked about it over the course of probably about 12 hours, 15 hours, and made the decision that it what was best for us.”

It was an option he didn’t see coming.

After spending two years with the NFL’s Cleveland Browns, Jones took a head coaching job at his high school alma mater in South Pittsburg, Tennessee. It’s a town of fewer than 3,000 people, located in south-east portion of the state, just a Boris Bede kickoff north of the Alabama border. 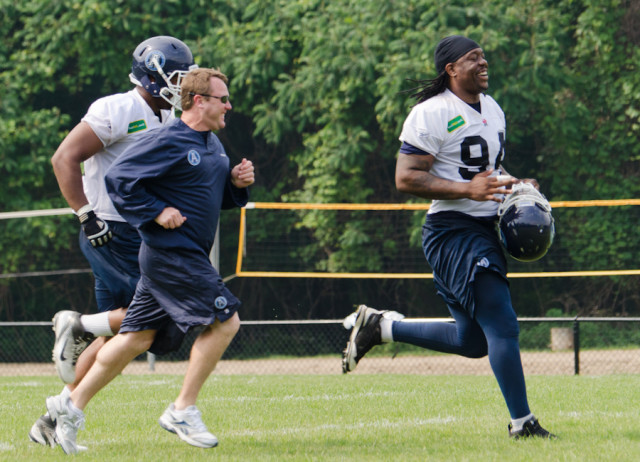 The plan was a simple one. He would press pause on the nomadic lifestyle of a pro coach and settle down with his family. He’d coach for the joy of the profession, experiencing a different type of pressure than he felt in the pros.

As in many areas in the American deep south, Southeast Tennessee has experienced more than its fair share of Covid-19 cases. While the South Pittsburg Pirates had dreams of a state title, they had played just one of their scheduled four games this season due to Covid issues.

“It was frustrating,” Jones admitted. “You did all this work and literally there were three games that were cancelled. We were off for 21 days straight with no practice, no games.”

Then came the phone calls that led to him taking the job up north and having to leave the high school team. Recalling that conversation caused a usually stoic Jones to get a bit emotional.

“That was one of the toughest things I’ve ever had to do,” he confessed. “Those kids are great kids. The toughest thing for me to do was to look at those kids last Monday and sit there and tell them that I’ve got an opportunity that I can’t turn down. I felt like I was making a difference with some of them. You’ve got a lot of kids that are at risk; they don’t have male figures in their life, and then here I am, I’m leaving. That was a tough situation.”

Anyone who doubts his sincerity wasn’t looking into his eyes when he continued talking about his former players.

The decision had been made. Jones was switching armadas. He was leaving the Pirates to join the Argonauts.

The transition will be rapid. Head Coach Ryan Dinwiddie announced on Tuesday that Jones would be calling the plays this Friday when the Argos host Montreal. He doesn’t imagine putting his spin on the system Glen Young had implemented will be much of a problem.

“There’s only so many things you can do in football; man-to-man is man-to-man,” said Jones.

It’s also helped that he’s watched video. A lot of video. It’s like he’s binge watched every episode of The Office in a week.

When asked just how much game film he’s watched, Jones let out a “heh” before expanding on his recent viewing habits. 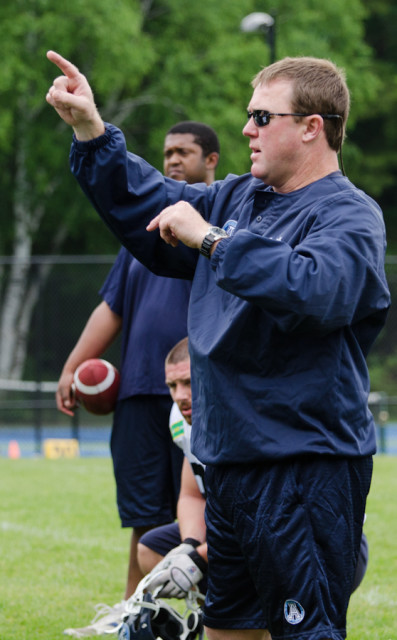 Jones likes what he has to work with in Toronto, citing the team’s speed and length, especially up front, something he had with the 2012 Grey Cup group. And like that championship team he’ll be working closely with a well-respected coach, one with five Grey Cup rings of his own, Rich Stubler.

It’s an interesting marriage of styles; Jones, who’s reputation is someone that will bring pressure early and often, and Stubler, who’s defences have thrived on being precise and patient, waiting for an impatient offensive coordinator to make a mistake, then capitalizing on it.

“He’s one of the top coordinators of all-time,” Jones said of Stubler. “His teams would always take the football away and score touchdowns. We’re going to try and mesh what he’s been doing with what we’ve been doing and pressure the quarterback and play coverage and see if we can’t marry the things.”

“It’s been really interesting,” he said of his conversations with Stubler. “He’s a brilliant guy. It’s kind of like being around Don Matthews, they’ve forgotten more football than I know. It’s just a matter of us finding the happy medium between the two. The good thing is that some weeks it can be one thing, some weeks it can be another. I think that’s going to be the uniqueness of what we do.”

It’s astonishing that the Argos needed a Grey Cup calibre defensive coach and were able to find someone with Chris Jones’ credentials available to join them.

Now, if he can only find himself a boat.