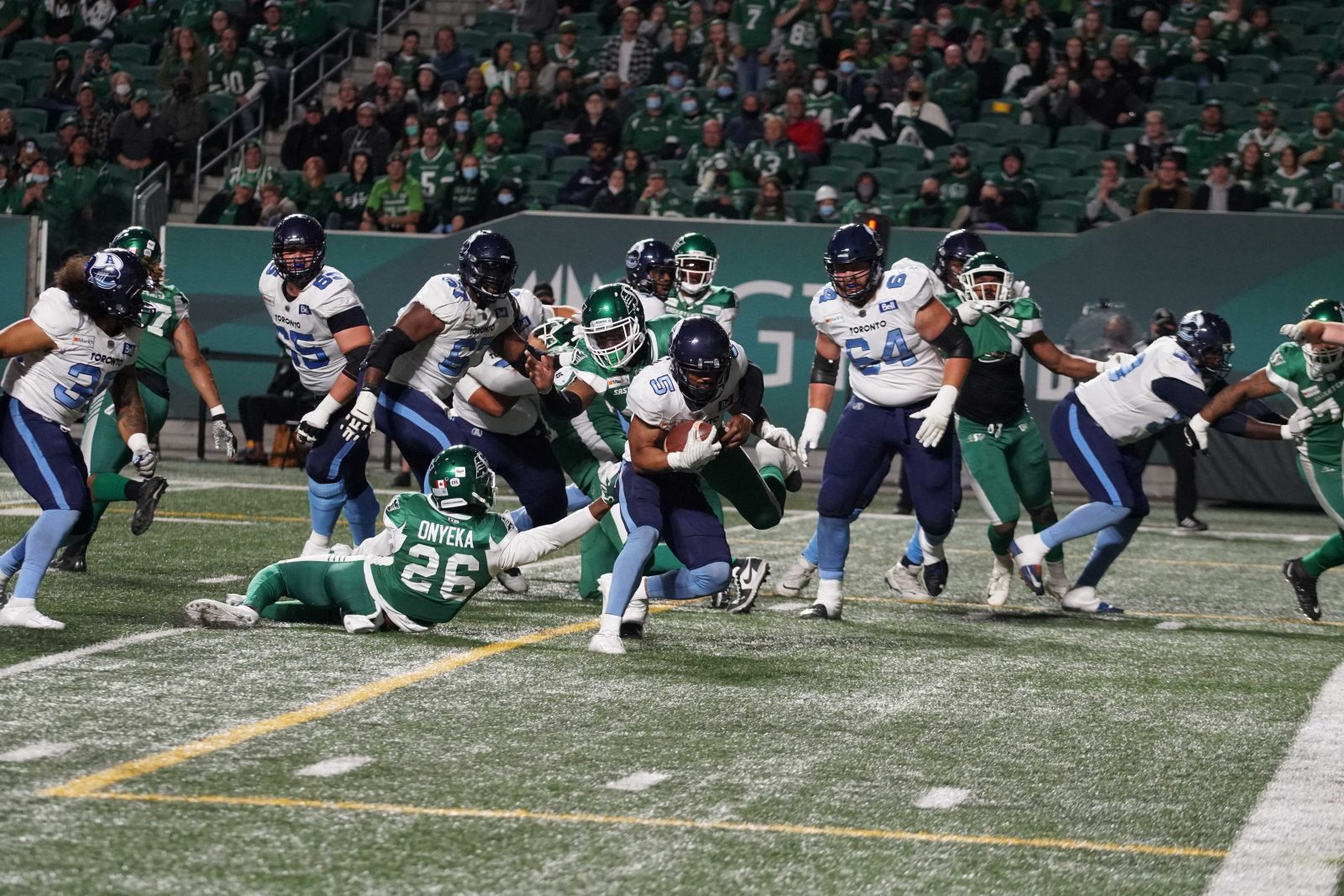 REGINA — Cody Fajardo accounted for three touchdowns and William Powell rushed for 122 yards as the Saskatchewan Roughriders claimed a 30-16 win over the Toronto Argonauts at Mosaic Stadium on Friday night in Week 7.

Saskatchewan (4-2) bounced back from consecutive losses to the Winnipeg Blue Bombers, while the Argos dropped to .500 at 3-3.

The Riders carried a commanding 18-3 lead into the second half following a pair of offensive touchdowns and a big goal-line stand.

Nick Arbuckle connected with DaVaris Daniels for a 21-yard touchdown to pull Toronto closer in the third quarter, but the Riders regained momentum to start the fourth with rookie Kian Schaffer-Baker‘s first career CFL touchdown.

The Argos responded with Arbuckle throwing an eight-yard touchdown to Eric Rogers, but Brett Lauther‘s second field of the game sealed the win.

Riders workhorse William Powell rushed for a game-high 122 yards on 21 attempts, including 86 yards in the first half alone. Schaffer-Baker finished with 99 receiving yards on nine catches, including 51 yards after the catch.

The Riders came out firing on offence with an eight-play, 78-yard opening drive that Fajardo capped off with a QB sneak touchdown. Kyran Moore got the drive started with a 19-yard catch-and-run on a quick hitch play before Powell strung together two 13-yard runs to move Saskatchewan into scoring range.

Schaffer-Baker set up the touchdown with a 12-yard catch, and Brett Lauther kicked the extra point to give the Riders an early 7-0 lead.

Saskatchewan’s defence notched a turnover on the following drive when a big tackle by Elie Bouka knocked the ball out of the hands of John White for the fumble. Micah Johnson scooped it up to secure the turnover, but the team was unable to convert it into points as the ensuing drive ended with Lauther’s 45-yard field goal attempt falling short.

Lauther’s tough start continued late in the quarter when his 46-yard field goal attempt went wide right, but the Riders did add a single on the play as the ball was downed in the end zone. The Argos began to find an offensive rhythm to start the second quarter, with Arbuckle completing three straight passes.

A 26-yard run by Chandler Worthy on a reverse moved the ball inside the Riders’ 10-yard line, but playmaker D.J. Foster was prevented from reaching the end zone on consecutive plays. Boris Bede kicked the 15-yard field goal to cut into Saskatchewan’s lead.

Toronto’s defence secured a turnover on the following drive with Crezdon Butler picking off Fajardo, but Saskatchewan’s defence returned the favour just three plays later when Arbuckle lost possession of the football while trying to evade pressure from Deon Lacey, with Keion Adams recovering the fumble for the Riders.

The first play of the ensuing drive saw Powell find daylight for a 33-yard run after juking Chris Edwards, and Fajardo finished things off with a 12-yard touchdown pass to Brayden Lenius on a curl route for the receiver’s second score of the season. Lauther added the extra point to put the Riders up 15-3.

Arbuckle came through with a beautiful throw on the run late in the half to find Eric Rogers deep down the field for 59 yards, moving the ball to the Riders’ five-yard line. But Saskatchewan stepped up with a tremendous goal-line stand, forcing a turnover on downs after shutting down Toronto’s three attempts to reach the end zone.

The Riders kept things moving on offence in the final two minutes, with Fajardo breaking off a 17-yard run and following it up with a 16-yard pass to Schaffer-Baker. A final eight-yard strike to Moore set up a 24-yard by Lauther that put Saskatchewan up 18-3.

The Argos stormed down the field to start the third quarter on a drive that saw Arbuckle connect with Daniels three straight times  — with the last going for a 21-yard touchdown on a perfectly executed play-action pass.

Toronto’s ensuing two-point conversion attempt was shut down when Arbuckle was sacked by Micah Johnson.

A 25-yard gallop by Fajardo and a pair of strong runs by Powell helped set up Saskatchewan’s next score. Schaffer-Baker moved the ball further into Toronto territory with an 11-yard gain, and he capped off the drive with an incredible 24-yard catch-and-run.

Schaffer-Baker broke multiple tackles on the play before bulldozing Shaquille Richardson into the end zone for the score.

Fajardo then found Mitchell Picton for the two-point conversion, and the ensuing kickoff was downed in the end zone for another point — giving the Riders a 27-9 lead.

Arbuckle answered back with an 18-yard touchdown strike to Rogers that was set up with two big passes to Ricky Collins Jr. Bede kicked the extra point to cut Saskatchewan’s lead down to 11 points with just over ten minutes remaining.

Lauther added a 23-yard field goal to extend the lead with under two minutes to go, and Nick Marshall notched a late interception to seal the win.

Week 8 will see Toronto host the Montreal Alouettes next Friday at 7:30 p.m. ET, while Saskatchewan will face the BC Lions on the road later on Friday at 10:30 p.m. ET.