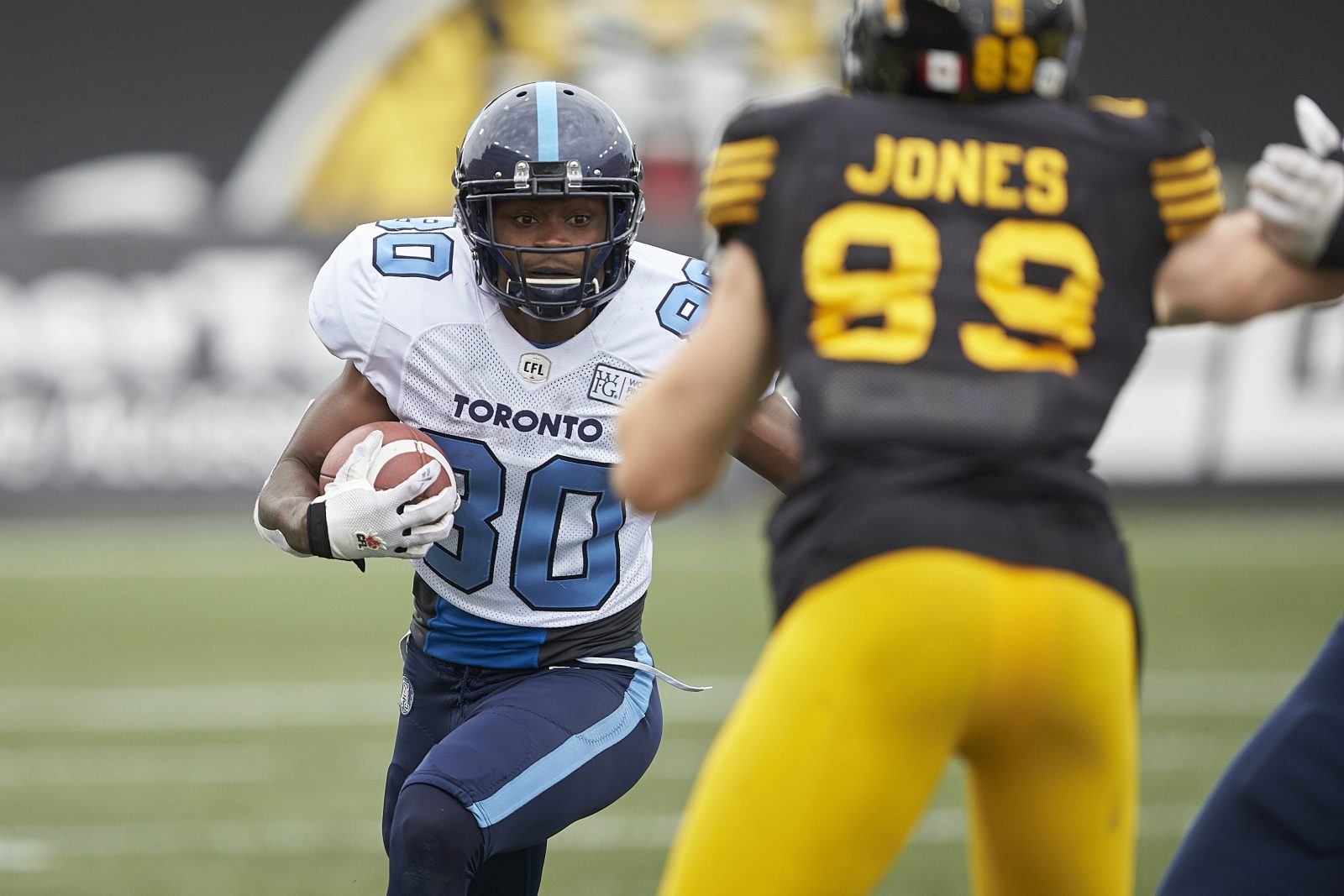 Toronto‚Äôs Kurleigh Gittens Jr. runs the ball during the third quarter of the CFL‚Äôs Labour Day Classic between the Argonauts and the Hamilton Tiger-Cats in Hamilton, Ontario on Monday, September 2, 2019 (CFL PHOTO - Geoff Robins )

They’re just two words, but for fans of the Toronto Argonauts it’s major part of the lexicon at this time of year, the week before the Labour Day Classic.

Argo and Ticat fans have a lot more in common than they would like to admit. They’re passionate supporters of a spectacular league that often times doesn’t get its proper respect in the region’s mainstream media. They’re also united in one undeniable fact; on Labour Day it’s important to beat the team from down the QEW.

For some, if not many Ticat fans, winning the LDC is as important, if not more important than winning the Grey Cup. Then again, when it’s been so long since you’ve won a Grey Cup that makes a lot of sense (consider that a Labour Day shot fired).

Legendary Argo coach Leo Cahill loved to pour fuel on the rivalry’s fire, once quoted as saying “Hamilton’s the place where they sit on the side of the mountain at night, watch the lights of the big city, and wonder what everyone’s doing there. In Hamilton, they all wear hard hats and they don’t even need them.”

For longer tenured Argos like Jamal Campbell, Declan Cross and Llevi Noel, the Argo/Ticat tradition means a little more than it does to some of their teammates, though that will change quickly. For other members of the current edition of the Argos who are relatively new to this, their fiercest rivalry is from somewhere else.

This will be the first chance for Head Coach Ryan Dinwiddie to experience the Southern Ontario version of the Classic. He was a player in Winnipeg for their clashes with Saskatchewan, then a coach in Calgary for the Battle of Alberta.

While he fondly remembers those battles, as well as an intense rivalry from his college days between Boise State and Fresno State, his most heated rivalry stems from his high-school days.

“I played at Elk Grove High School, just outside Sacramento, California,” he recalled with a bit of fire in his eyes. “We played Grant High School every year in the playoffs. They were the North Sac team and they were very talented with a lot of guys who would go to college and the NFL. Each year we knew they were going to be our main opponent that we’d have to beat to win the championship.”

The quarterback was quick to point out they won the rivalry game each year, but there was one specific victory that was the sweetest.

“We played them in my junior year in the city championship and they were the defending champions. They had a really good team coming back. At the end of the game I kicked the game winning field goal to win the game with no time left in front of 20,000 fans at Sac State, so that was a pretty special day for me. It was a chip shot, about 30 yards.” 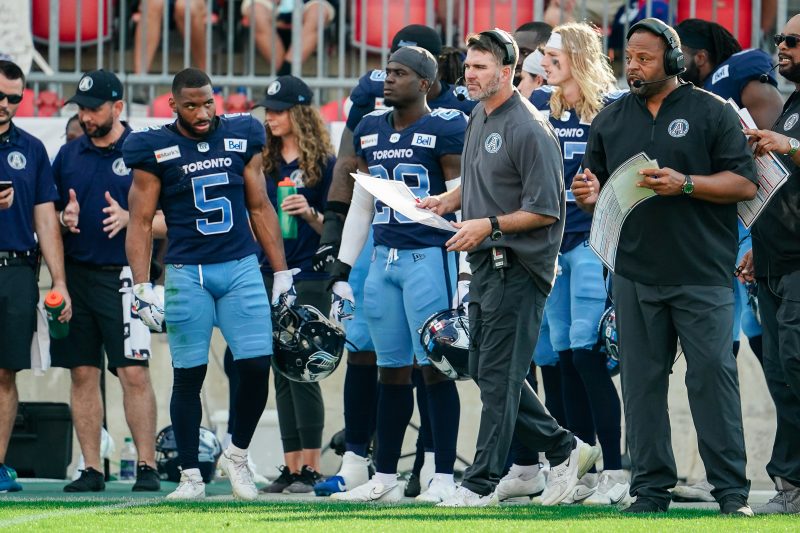 That’s right, Ryan Dinwiddie; quarterback, placekicker, and punter. He did both kicking chores in high school and was the back-up in those roles at Boise State and in the CFL.

There are also great rivalries at the college level, and few in this country are better than Laurier versus Western. Dylan Giffen represents the Mustangs on the Argos, while Robbie Smith, Sam Acheampong, Brandon Calver and Kurleigh Gittens Jr. all have ties to the Golden Hawks.

Gittens was an outstanding player at Laurier, being named the OUA MVP in 2017, not a common occurrence for a receiver.

“Western was the school we didn’t like because we were both purple,” he said with a grin. “The slogan was always Our Purple is Better. My first year I thought ‘What is this?’, but as I played my four years at Laurier I got into the tradition.”

The intensity of the rivalry was magnified on the Hawks side because their head coach, Michael Faulds, was a quarterback at Western and like Gittens was once named the conference’s MVP. For him the rivalry is a bit more personal.

Two games from the rivalry standout for Gittens. In one game in 2017 he caught an astonishing 18 passes in a game against the Mustangs, one shy of another former Argo/Golden Hawk, Andre Talbot’s OUA record.

The other comes from the 2016 Yates Cup championship game, one that nobody who watched it will ever forget.

“That was a pretty good game,” said Gittens, underselling the drama as much as humanly possible. “We were down 21 points with eight minutes left. A point of fact about that game, I didn’t get my first catch in that game until the fourth quarter and I had six catches…”

Argonauts.ca felt compelled to cut in before he could finish the sentence. Seriously? You had six catches in the fourth quarter?

“Ya,” Gittens continued, almost embarrassed about that part of the story. “I caught a touchdown pass to tie the game.”

Six catches for 71 yards and a game-tying TD with a minute left were pretty significant contributions to a comeback from a 40-19 deficit almost halfway through the fourth quarter of a championship game, and especially sweet when it came against the rival wearing the other shade of purple.

Pro football has a long list of bitter rivalries, and one member of the Argos was a member of one of the fiercest on the sport’s biggest stage.

Linebacker Shane Ray, currently on the six-game injured list, was a part of some pretty intense feuds at the high school level, as well as with the University of Missouri, but they all paled in comparison to the games where his Denver Broncos faced their AFC West rival Kansas City Chiefs.

Adding to the intensity for Ray is that he’s a Kansas City native and his family were all Chiefs fans before he was selected by Denver in the first round of the 2015 NFL Draft.

“Every time that we played the Chiefs and it was a home game for them it was definitely big,” said Ray. He also remembered some memorable moments in the series, and one play he’d rather forget. “I had a couple of sacks against Alex Smith that I remember. I actually had my first rookie ‘Welcome to the league’ play against the Chiefs too.”

Argonauts.ca double clutched before asking him to elaborate on that one.

“It was a zone read they had with Jamaal Charles. I played the read too late and Jamaal took it for, like, 30 yards for a touchdown and I was like ‘Oh, wow, okay, that was on me.’ Learning that and having that competition and understanding that things happen made the rivalry so much sweeter.”

When the Argos and Ticats meet at Tim Hortons Field on Monday, then in a rematch four nights later at BMO Field, big plays will be made, mistakes will occur. There will likely be a nasty word or three exchanged Monday that will be escalated on Friday with the rematch coming so soon.

It’s part of the intensity that makes the 50th Labour Day Classic such an important part of the schedule for both Argo and Ticat fans, and underscores how important the rivalry is for both organizations. The intensity level will be even higher this season because the four games the teams will play could decide first place in the East.