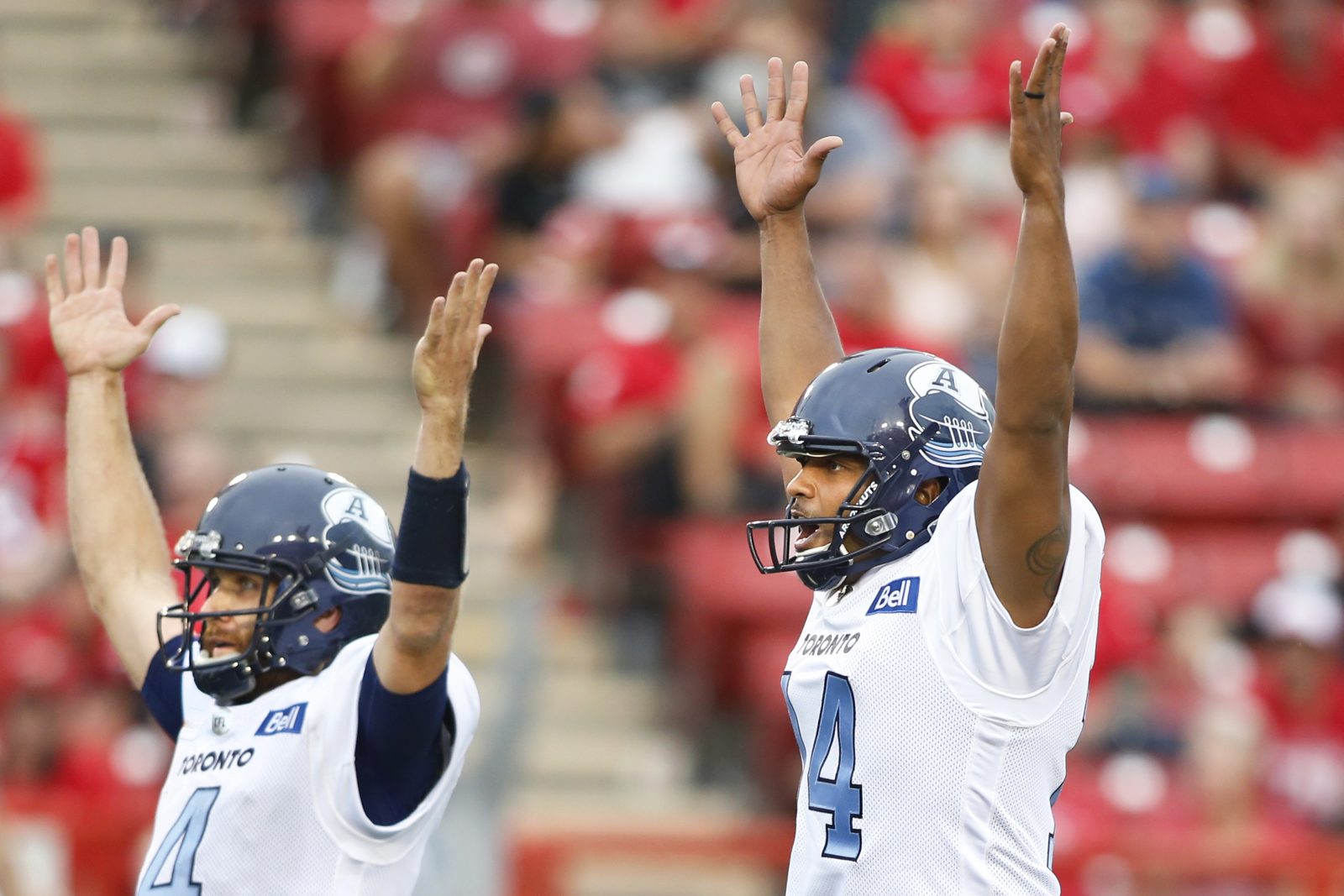 There’s a stereotype that’s floated around football for years that kickers are wired a little bit differently.

That can certainly be true. Because of the precision needed they’ve got to be comfortable with their long snapper, their holder, and specifically their shoes. Anything to throw off their pre-kick routine can be problematic for some kickers.

The Laval product is different than a most kickers, mainly because of his size. He’s 6’4” and weighed in at camp at a solid 243 pounds, enormous for someone who plays that position. Bede is also a little bit unusual for a kicker because the doesn’t dwell on the bad stuff.

That’s easy to say, but is it tougher when things aren’t consistent?

Bede – who connected on 88.6% of his attempts last year, second best in the CFL – had a rollercoaster of a game in the Argos 23-20 win in Calgary last Saturday. He narrowly missed a 58-yard kick that would have been the longest in team history. He hit the kick so squarely it would have been good from roughly 65 yards.

Subsequent to that he had a punt blocked, hit a 54-yard field goal (tied for the third longest in Argo history), missed a 27-yard FG attempt at the end of the first half, then capped his day by hitting a game winning 32-yard field goal with just 37 seconds left on the clock.

For many kickers, that kind of day would have left them a mess mentally.

“You learn,” said the born in France, raised in France and Massachusetts kicker. “I’ve had my ups and downs. My first year everything went great, in my second year everything didn’t go too well so you’ve got to learn from it. You just refine your techniques and you learn. Either way you know what you’ve got and what you’re capable of doing. You’ve just got to be confident at all times.”

Bede showed that in the first half. After a punt was blocked, he blasted one 72 yards on the next possession; but there was a contacting the kicker penalty on the play and head coach Ryan Dinwiddie opted to take the yards and attempt a 54-yard field goal. Bede crushed it, splitting the uprights with plenty of distance to spare and rewarding his coach for showing confidence in him.

Some teams carry a punter and a place kicker, so there’s plenty of time for pre-kick visualization, something some kickers feel is a crucial component to their preparation. Bede had to go from punter to placekicker with next to no time to mentally prepare.

“It’s part of the game,” he said matter-of-factly. “You’ve got to be prepared for it. It was the first time that happened to me, but you have to act like you’ve been there before and just make it happen. I missed one right before. I was at about the same distance so (I thought) just put it through the uprights. I know what I can do.”

So do his teammates. After the miss at the end of the first half, it wouldn’t have been surprising if some players were upset with the kicker, but Bede’s kicking in all three areas has impressed his teammates, as has his constantly positive, professional attitude. Needless to say, they had his back at halftime.

“The feeling of making a field goal is always good but having the support of your teammates is a lot more important,” Bede explained. “As soon as I missed the second field goal I was like ‘What the hell just happened?’ and all the guys came to me at halftime and were saying ‘Hey Boris, you’re going to kick the game winner, just be ready.’ The guys trusted me; the guys had my back. That’s all that really mattered.”

His teammates were prophetic. His 32-yarder with just 37 seconds left was the margin of victory. It capped off an 11-play drive that started at the Argos 26-yard line and featured conversions of second-and-ten, second-and-eight, and second-and-nine that had Bede more excited than the kick itself.”

“It’s part of the game. It’s not a ‘wow’ feeling, I’m not going to lie to you. I was excited because we had possibly won the game on that kick, but it’s not just one kick, it doesn’t come down to one kick. It was a team effort. If we’re going to talk about the made field goal, I’m going to talk about the drive that the offense put together to get me there. That’s how I look at it. I was more excited about the whole drive than me making the field goal.”

Bede is a weapon who excels in all three kicking disciplines. His 54-yarder was the longest in the league in Week One, his 48.3-yard average stands third among punters, while his kickoff average of 75.5 yards is a whopping 9.2 yards more than the next highest average in the league.

He more than proved his importance to the team in the season opener.