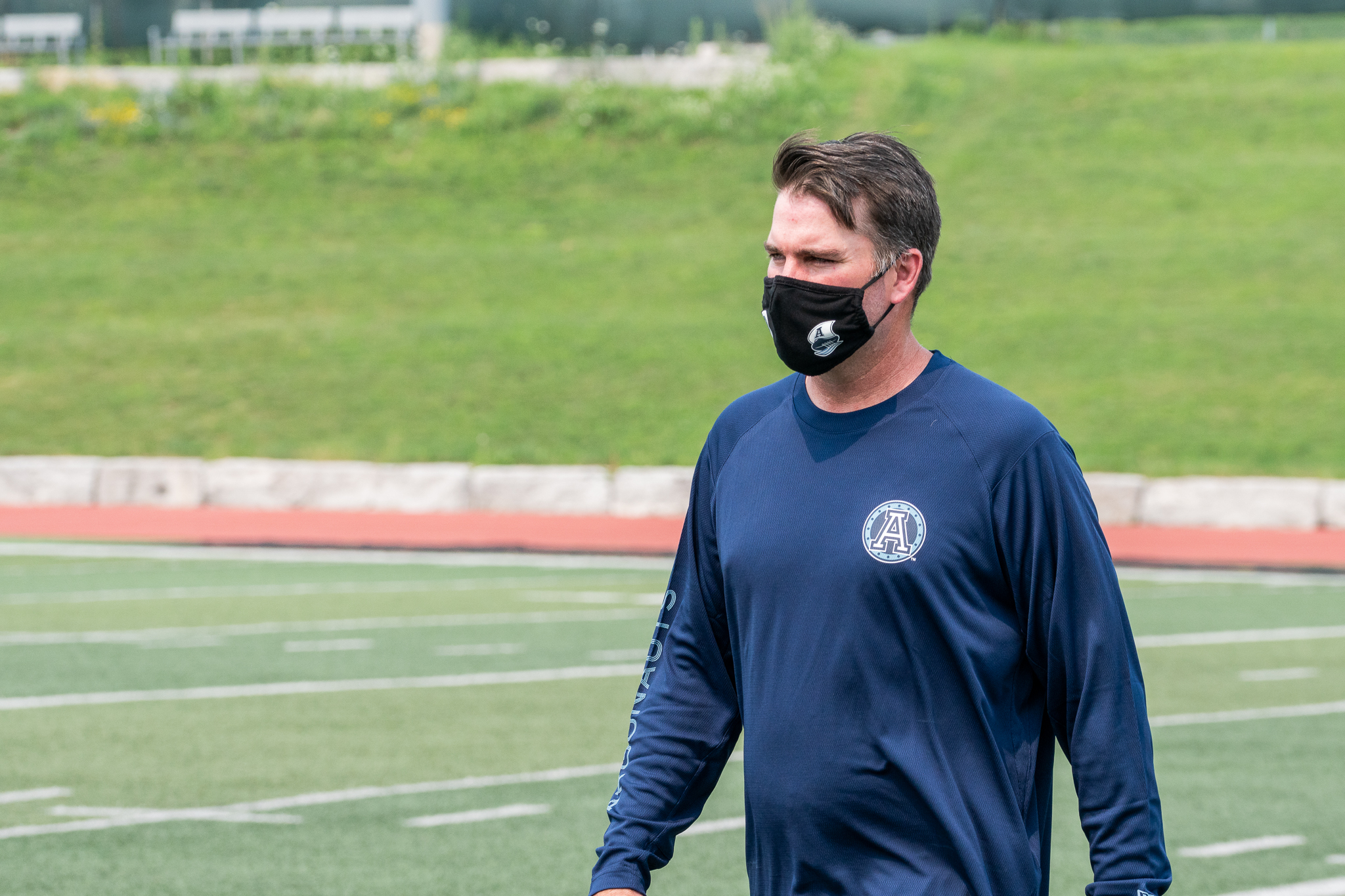 The most highly anticipated training camp in recent memory, perhaps ever, is now in the rearview mirror. The University of Guelph proved to be exceptional hosts for the Toronto Argonauts, who a full year and a half since their last game, now prepare for the 2021 regular season opener in Calgary on Saturday, August 7.

This training camp was different. COVID-19 precautions ruled the day, from needing three dressing rooms, to having no fans allowed, to limited media access, to keeping players isolated aside from practice and meal periods, to the double digit COVID-19 tests for each player, coach and staff member.

With all that said, football was back and the exceptionally positive attitude throughout the last three weeks was beyond what most could have anticipated.

For Head Coach Ryan Dinwiddie – in the unique position of entering his second year, but only his first season with the team – this camp couldn’t have come soon enough. He sat down for a conversation with Argonauts.ca to discuss his first training camp as a head coach.

“It went well,” he said, just after his team left the practice field for the final time. “There were a lot of different things behind the scenes that you’ve got to deal with. Each day was different. There was always something going on, especially with all the COVID-19 protocols. You just try to take each day as it is.”

It’s not like Dinwiddie hasn’t been though training camps before as a player, then as a positional coach. This one was different though as he was the man making the final decisions on virtually everything. He wasn’t really surprised by anything, except maybe having to be as flexible as he was.”

“I think as far as being extra prepared and being organized and then having to change on the fly each day, that was the main thing. Each day was something new, ‘We’ve got to change this, we’ve got to change that,’ and how can we get our schemes taught at the same time? We had to move some things around as far as install. Everybody’s flexible, but the fact that we put all these guys in game situations in practice, that was the key to let those guys understand the differences between the CFL game compared to the American game for some of the rookies. We ran through all those scenarios so those guys should be ready to go Week One.”

The conversation was held in what is normally the room used by the Guelph Gryphons defensive line, but for the last 21 days has been hijacked by your humble typist as his hiding place. Defensive meeting rooms have been foreign territory for the man who played quarterback before coaching them, but this year he made a point of spending time with the defence and special teams.

“It was a little awkward at first,” he said with a smile. “I was like, ‘I should be doing something,’ so I’m walking around watching the defence, watching special teams and I’m normally working with the quarterbacks during special teams (practice periods). I was sitting there watching, seeing how each position group is doing everything and in my mind I’m thinking I should be running around doing something. I feel like as an offensive coach, being the play caller here, that I needed to spend more time on special teams and defence to let those guys know that I’m a part of them, I’m not one of those guys that just cares about the offence.”

Dinwiddie is pretty confident his time and effort is paying off.

“I feel like I’ve got a pretty good relationship with the defensive guys. They know that I’m a defensive-minded head coach. That’s very important that we have a great defence. Offensively, ya, I call the plays, but looking at our full team we’ve got to be physical on special teams, we’ve got to be smart, we’ve got to be disciplined on defence as well.”

Good teams have a mixture of talent and great chemistry on the field. Elite teams have great talent and great chemistry on and off the field. Trying to get players to bond as people has been incredibly tough. COVID-19 restrictions meant they couldn’t hang out in the same locker room after practice, nor could they gather in their temporary housing in the evenings to get to hang out with each other. It’s something Dinwiddie kept an eye on.

“I was concerned about it early on. I had some team bonding stuff that I wanted to do. We were going to break up camp and get those guys into groups so they could get to know each other and not just hang out with their buddies all the time. We didn’t get the opportunity to do that, but I was pretty impressed by our leadership. Being a brand-new football team, there are a lot of veterans that have been in this league, but they haven’t played together before. I was kind of worried about how they’d gel, but you’d see those guys staying after practice and doing drills, working together.”

He’s been particularly pleased with the veterans.

“The leadership in the room has been outstanding. There are a bunch of different people. There’s always characters on your team, but I always say ‘Be a character with character,’ and I feel like we have those guys who have the leadership that can bring guys in if they get outside of our team goals and that we’re all working as one. I always think that coaches can handle the locker room, that’s what good teams do, but on great teams the locker room polices itself. I feel like our guys are policing each other, but they’re also enjoying each other’s company and really pushing each other to be better.”

Camp is over. The cuts have been made and the roster is set, though it will obviously remain fluid. Dinwiddie sees what he has to work with and is pretty optimistic heading into the season.

“The last week, I really started feeling a little more comfortable, I thought we were turning the corner and really coming together. We’re running the schemes cleanly, that’s the key. Offensively we got a ton better at the end. I probably threw too much at the offence early on, they couldn’t play as fast. For the most part we came out pretty healthy. We have our warts, just like any team. There are parts of the team where we want to get better, or we have to get more production out of. I feel like we’re good and we’ll try to get better each day.”

The Argos made a series of roster moves on Friday.

Two players were signed; Linebacker Vontae Diggs, and receiver Cam Phillips; the latter was moved to the Suspended List while he’s in quarantine.

Argonauts.ca was devastated to learn of the death of Wagner Lindsell Shell Jr., known to friends and fans as “Lin-J”, which stood for Lindsell Junior. Shell was known on the field as a hard-hitting member of the secondary, but off the field was famous for his passion about life, and his ability to work with kids. He was a true gentleman.

He died Thursday night in Florida at the age of 39. He played 53 regular season and two playoff games for the Argos between 2009 and 2011, being named an All-Star in two of his three seasons here.

After his CFL days were over he headed home to work with, teach, and coach kids. He gained national attention in 2018 when he peacefully disarmed a woman after a gun was drawn during a brawl at a high school at which he was teaching.