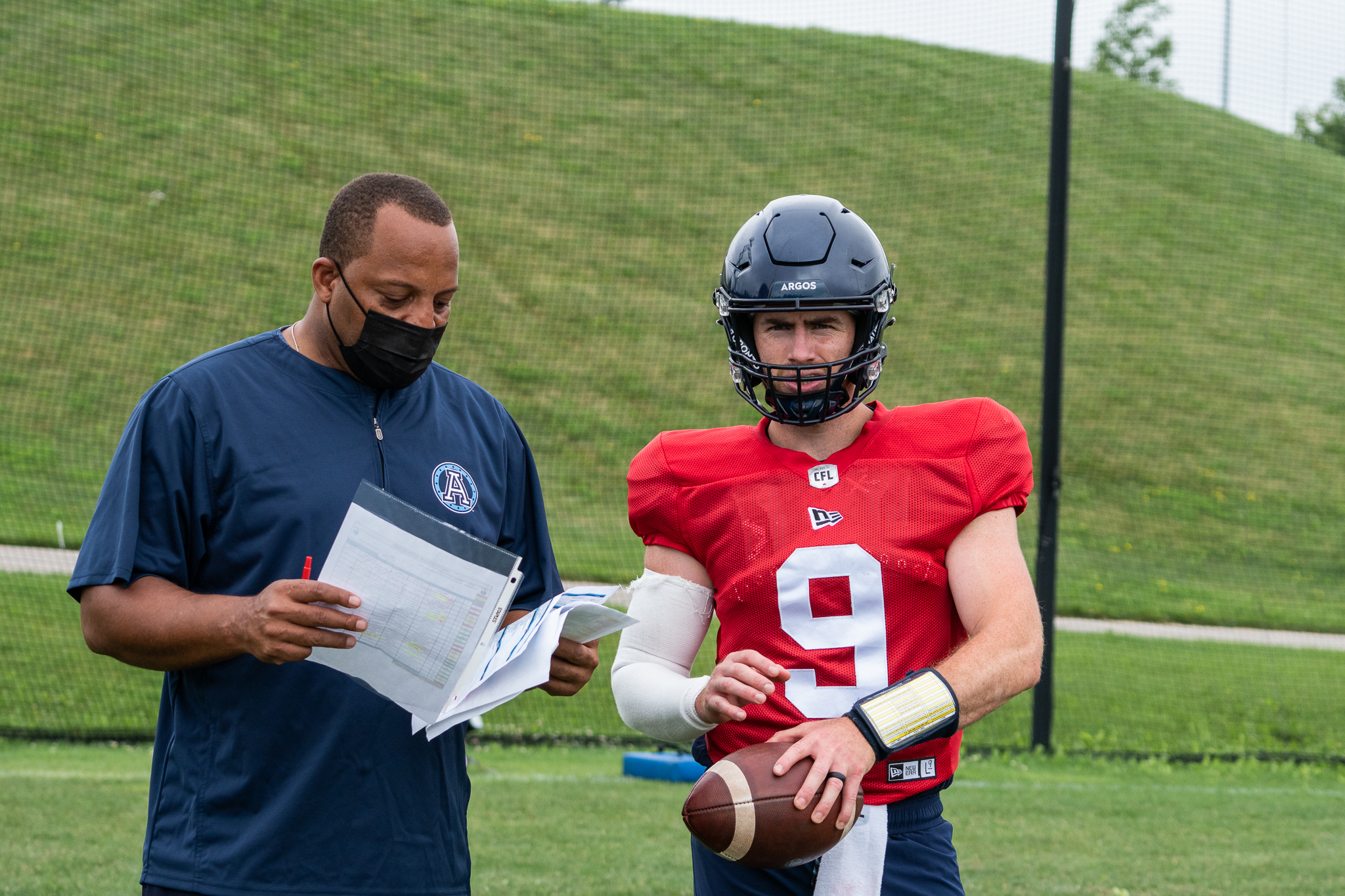 Halftime. The point in a game where players can catch their breath and coaches can make adjustments for the second half.

As the Toronto Argonauts hit the mid-way point of training camp at the University of Guelph, Head Coach Ryan Dinwiddie and his three coordinators are making different types of adjustments based on personnel and injuries.

Arongauts.ca thought it was a good point on the schedule to talk to the three coordinators about their thoughts so far.

Jarious Jackson is back in Toronto as the offensive coordinator after winning a Grey Cup here as a player in 2012, throwing a TD pass to Dontrelle Inman in that game.

The offence has had its fair share of nicks and bumps and has had trouble keeping the same group on the field from day to day, frustrating when you have so many new players trying to develop a chemistry.

“It’s been good,” he said of the overall success of the first half of camp. “I’m sure everybody across the league is dealing with a lot of injuries, as to be expected with guys having so much time off. Guys are coming out here and giving it their all getting ready for Week One.”

To be running at peak performance, any group has to be playing as one unit, which has been tough for the Argos offensively. Each group has been hit, with players finding themselves on the field one day, out for a couple days, then back on the field the next.

The positive is that it’s given some of the new players an additional chance to shine, and many have; Dres Anderson, Damion Jeanpiere, Daniel Braverman, and Peter Nicastro immediately come to mind. 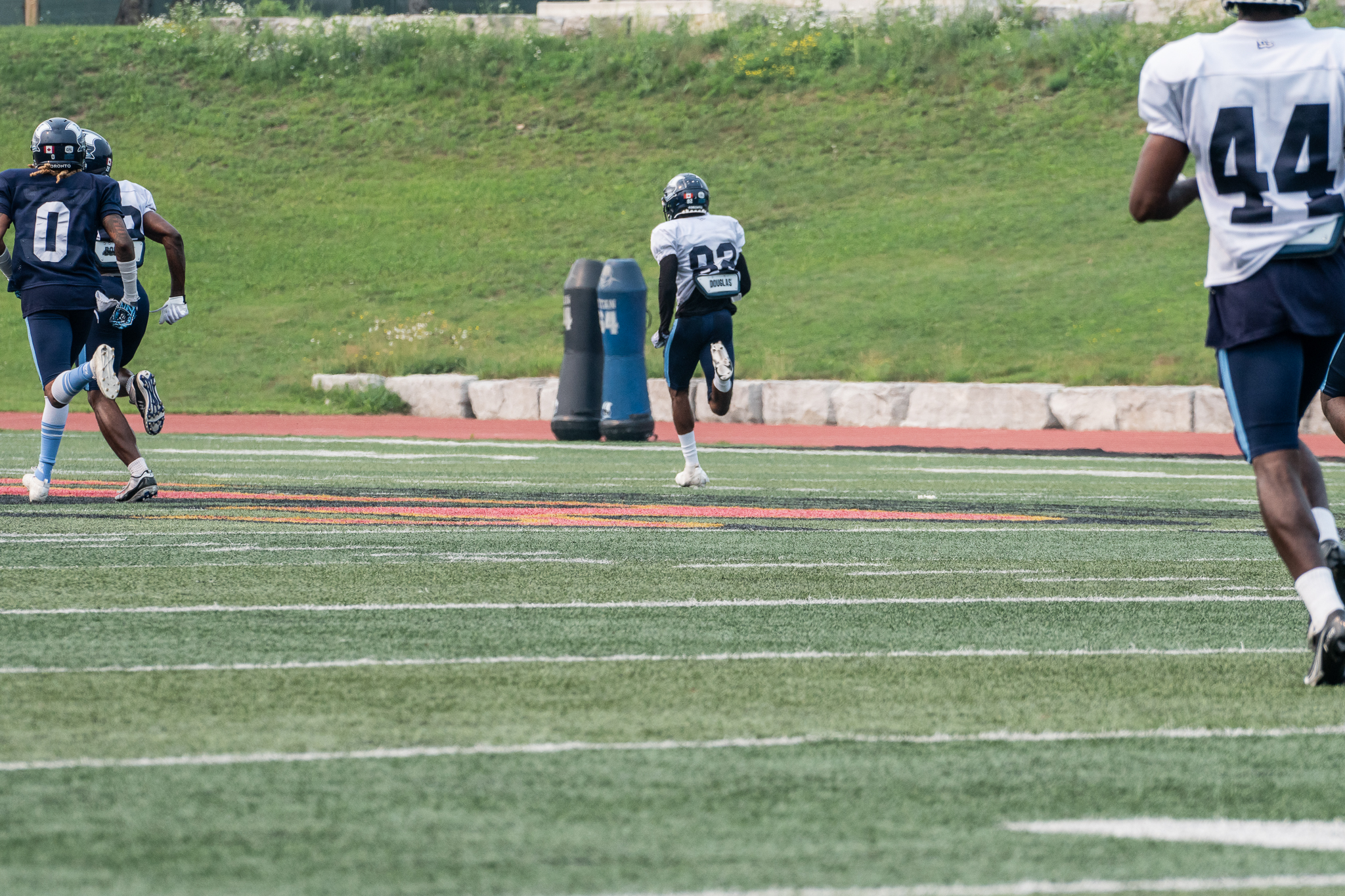 “Trying to be a cohesive unit is what everybody strives to do,” he said. “We’re going to work with what we have. You’d rather deal with it now than later though.”

Defensive Coordinator Glen Young has liked what he’s seen over the first half of camp. He says his group has been receptive and has picked things up very well.

“We’ve got a bunch of good kids that are working together,” “They talk things out together, you can see them walking through things on their own, so they make sure they know what they’re doing. That’s a testament to the type of guys we have here.”

Young is excited by the prospects of his group, saying the progression has been very good so far. In the second half of camp there is more to be installed, but he’s confident his players will pick it up.

“Guys get nicked up,” he said. “It’s okay to get a ‘vet day’ (a day off to nurse a minor injury, or just take a day off from practicing, which is much easier to pull off for a veteran as opposed to a rookie trying to impress the coaches) as long as they stay in tune mentally because that’s where the game is for me. You’ve got to be a quick thinker. If you’re a quick thinker and you stay in tune you think, and your body will react. Your body will always follow your mind.”

Special Teams Coordinator Mark Nelson has a lot to work with. There are several candidates to become the primary returner, including Terrell Sinkfield, Braverman, Craig Rucker, Chandler Worthy, and Jeanpiere. Nelson also has a veteran kicker who can do all three disciplines; field goals, kickoffs and punts. 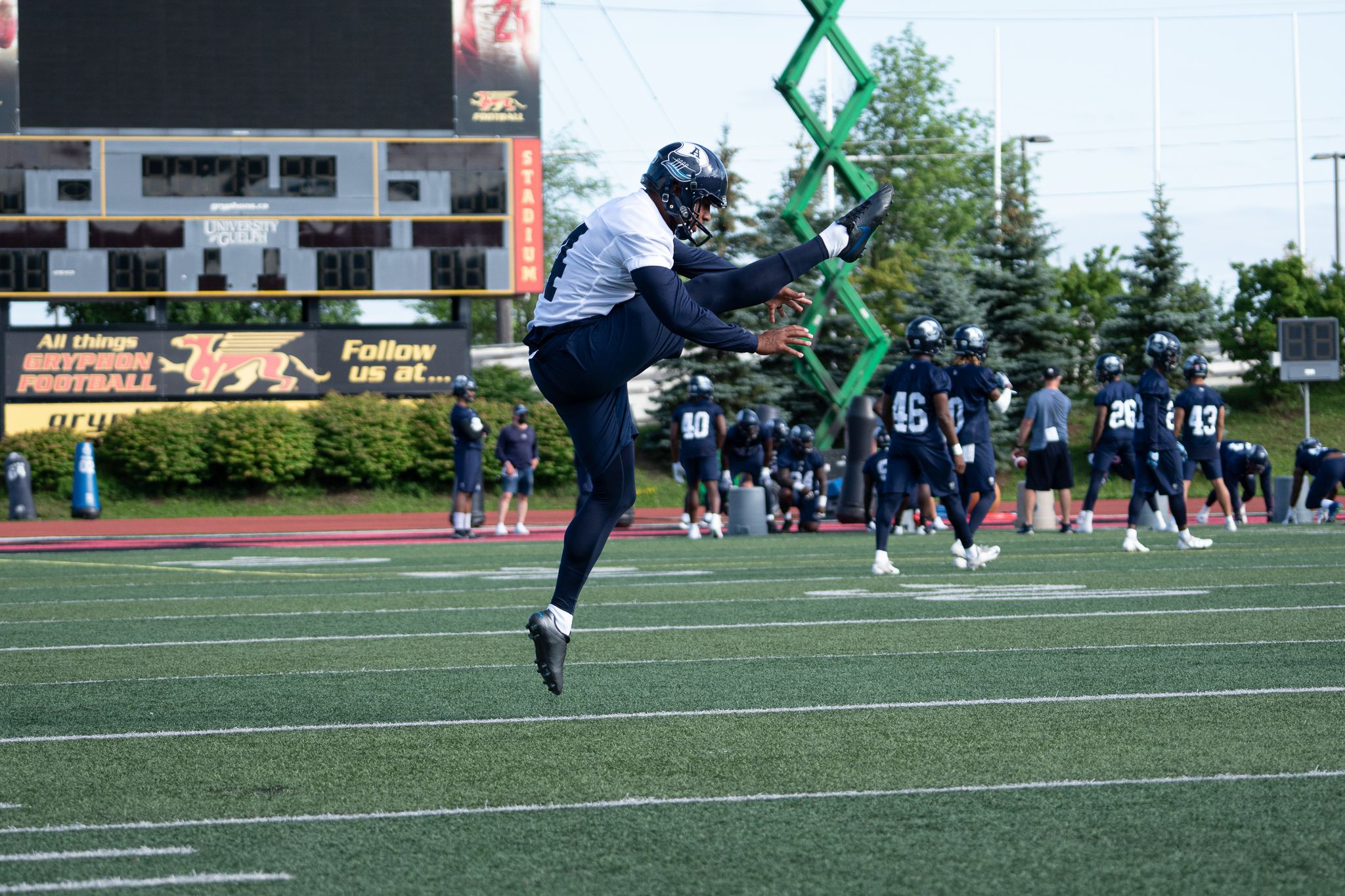 “(Boris) Bede is a legit kicker,” he said with a smile. “(Toshiki) Sato is a good young kicker that is learning the Canadian game and the nuances to it. Bede is very smart, an intelligent kicker. As for returners, we’ve got several really good kids here, we just have to see where all the pieces fit.”

As camp progresses more cuts will be made. The decisions will no doubt be tough this year, and for some players their contributions on special teams may determine their future with the team.

“Our defensive personnel are very fast,” said the coach. “Those kids are also going to be playing special teams, so that looks enticing,” he said with an even bigger smile. “We also have some good-sized receivers and a good corps or running backs, so hopefully we can mould a good group together that will be very competitive and help us win games.”

Tuesday was Media Day. There was no practice session, several players instead were asked to pose for photos and video of them in their uniforms. For many it was the first time they’d donned an Argo game uniform. For a peek at some of those players, check out the Toronto Argonauts social media pages.

The club released seven players as a part of the mandated CFL roster size reduction. Those players are quarterbacks Nick Tiano and Kenji Bahar, running back Matt Colburn, receiver Geremy Davis, fullback Liam O’Brien, offensive lineman Blake Camper and defensive back Travis Lee. Defensive linemen Odell Willis and Khyri Thornton have been placed on the suspended list for not reporting to camp. Willis is at home as he’s on baby watch with the arrival expected soon.

The team announced the signing of former NFL running back D.J. Foster. He had a stellar career at Arizona State before playing for the Patriots and Cardinals, but perhaps the most impressive day of his career was a high school game where he set state records in Arizona by rushing for 508 yards (on 20 carries) and 10 touchdowns in one game.