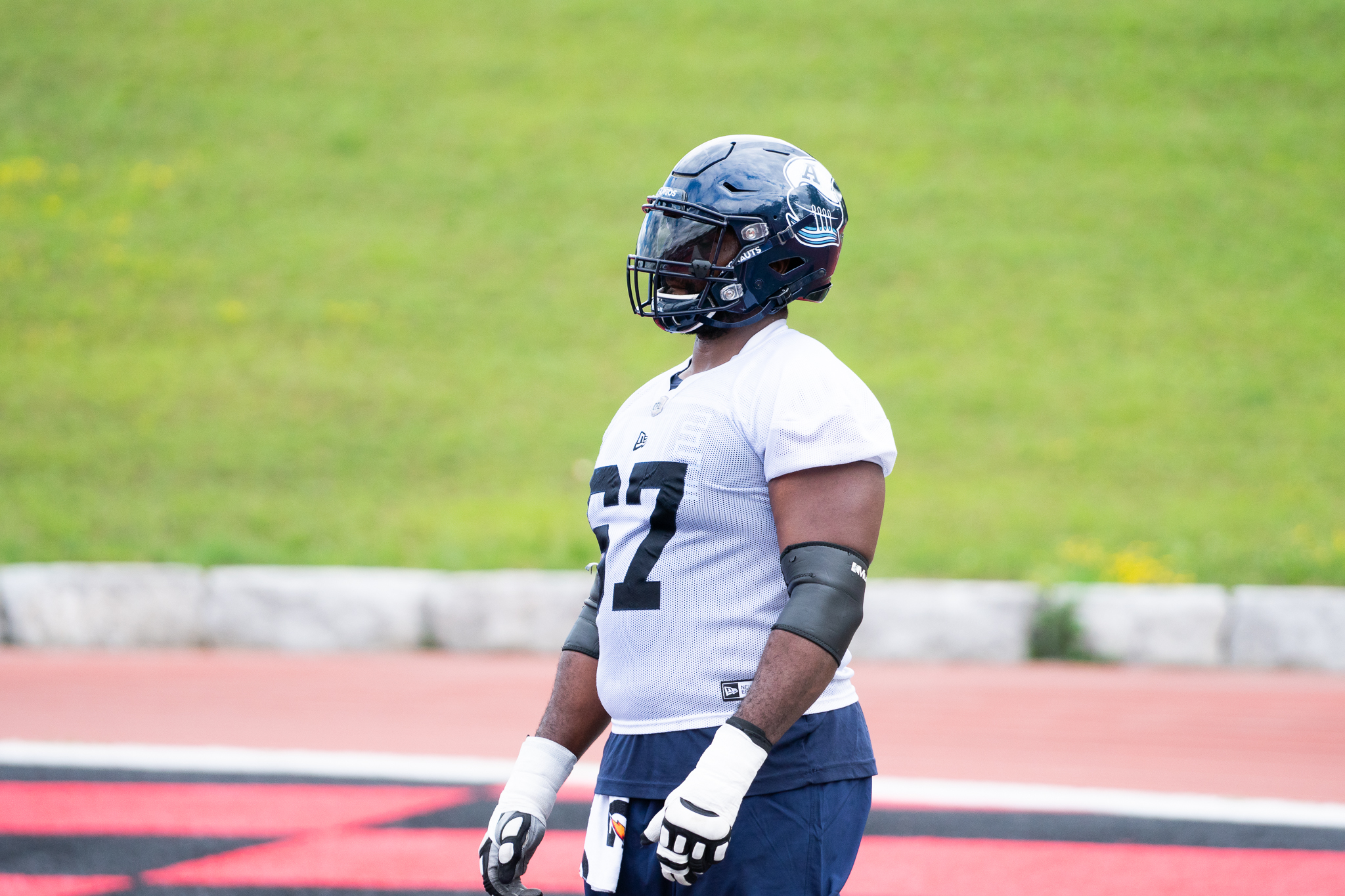 When Jamal Campbell arrived at Toronto Argonauts training camp in June 2019 he was on familiar, but shaky ground.

Camp was being held at York University, where the offensive lineman starred during his university days, and not too far from where he grew up. This camp would be different though, as he was no longer a recent draft pick, he was a player on the verge of losing his job. The question was whether he had moved from a pro prospect to a suspect pro.

In his first three seasons Campbell hadn’t played a lot, dressing 32 times with no starts. His main on-field contribution was being a part of the “jumbo” formation when the team was in short yardage situations.

It was time for him to put up or shut up, and the 6’6”, 305-pound gentle giant quietly did what he had to do. Campbell played well in camp, won a roster spot, and when he finally started for the first time August 16 against Edmonton, he played well enough that he started each one of the final 11 games of the season, showing improvement with every outing.

Campbell is now one of the veterans on the team, with only Jake Reinhart, Llevi Noel and Declan Cross playing more games in Double Blue. He loves the role of being a starter and a veteran.

“This year I’m just coming in and trying to set a good example,” he told Argonauts.ca after Thursday’s practice. “I’m trying to make sure I’m doing the right things and contribute to the team on offence in every way I can.”

He’s been noticeably good this year, understanding full well that the team has selected a number of offensive linemen in the last three drafts, all of whom are eager to take his place should he falter. He has demonstrated no sign of that happening and has shown that the Argos are solid at the right tackle spot.

The veteran is also eager to make sure everyone in his group, even the players pushing him, are all on the same page in terms of their assignments.

“Communication is more important now,” he explained. “We’re making sure that when we’re not (on the field during a drill) we’re taking mental reps and always doing things together. When we’re watching film, everyone is watching it and acting as if they’re in that position. That’s the most important thing because in football it’s always next man up.” 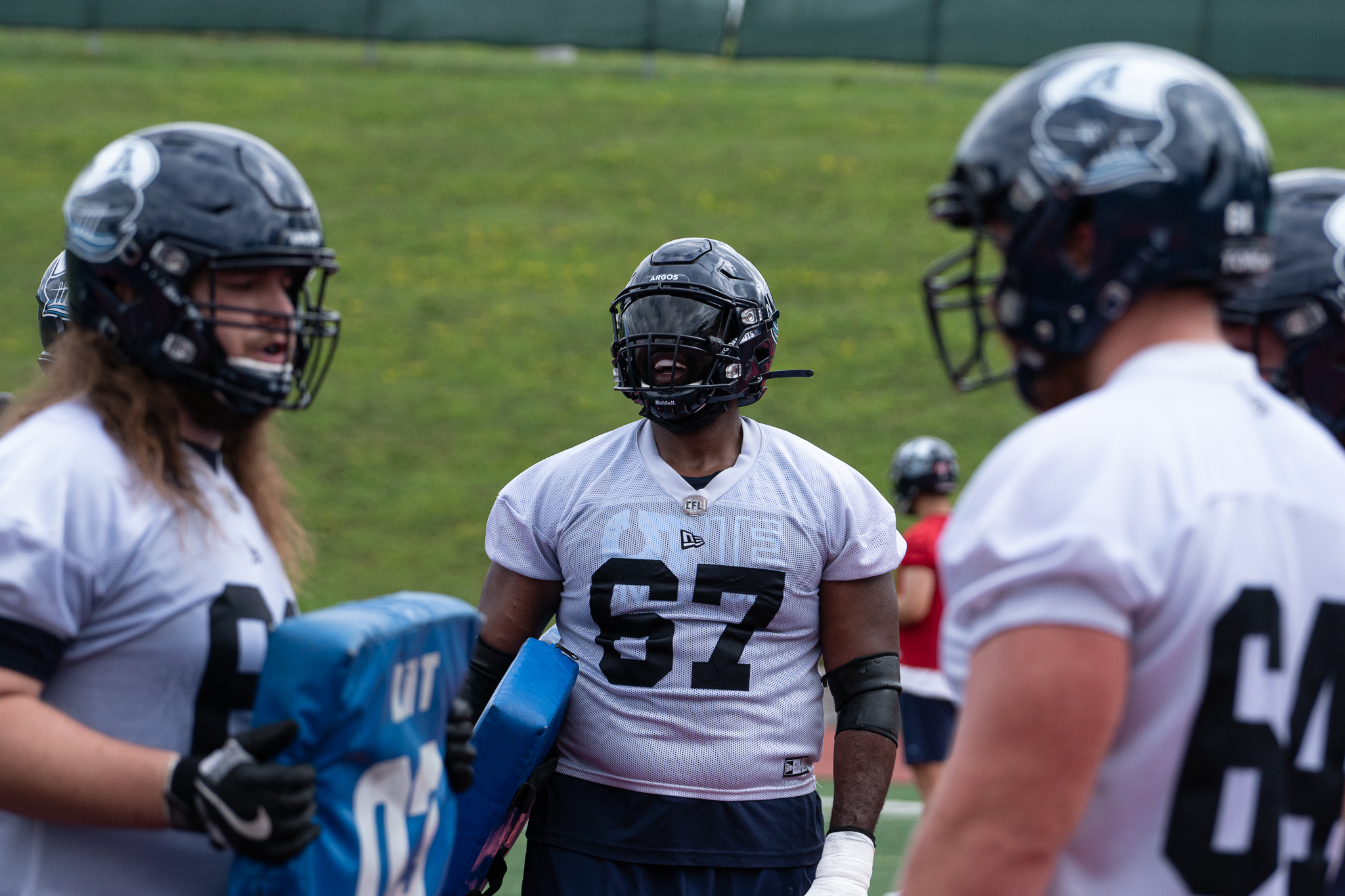 Campbell is working with a new positional coach this year in the person of Stephen McAdoo. Though he has been in Toronto before, the teacher left before the student was drafted. So far “Coach Mac” is impressed by what he’s seen.

“I like the guy”, McAdoo told Argonauts.ca. “He’s a professional. He hasn’t been a starter long, but he’s got those professional attributes that you want in a lineman. He’s aggressive, strong, big, athletic, and he wants to learn. He wants to get better. He’s taking in what I’m teaching and implementing it on the field, and I can’t say enough about that. As long as he’s willing to continue to learn he’s going to grow and grow and grow.”

The entire offensive line unit has a chance to learn on every snap, simply because of who they’re lined up against in one-on-one drills. Going mano a mano against players like Charleston Hughes, Cordarro Law and Shane Ray each snap is a challenge, but one that Campbell is up for.

“I like it,” he said with a broad smile. “I’m a competitor. I like one-on-ones because that’s the only time on the football field where I get to display my one-on-one talent. Every time I get the opportunity to go against these guys, I feel like I’m getting better. I want to win every rep, and that’s my mentality. When I don’t win, I just think “How can I get better on this next rep? He’s not going to beat me again.’”

It’s that combination of attitude and physical ability that has allowed Campbell’s career to go to the next level.

This was a second consecutive short practice for the team, which will be combined with an off day on Friday as the staff tries to give the players bodies a break.

Defensive lineman Shane Ray joined the media on a post-practice Zoom conference call. He was asked to play the role of scout and assess his own play.

“A self-scouting report of my ability to get to the quarterback; exceptional,” he said with a chuckle. “I’m an exceptional pass rusher. If I can’t do anything else, I can rush the passer. That’s been something I’ve always had a knack for.”

Ray also went into detail when speaking of the 2017 wrist injury that set back his budding NFL career with Denver.

“I had a complete wrist dislocation. I snapped the main ligament in my wrist, and I went out to practice the day after that and destroyed my wrist completely. I went from thinking I had a six-week surgery to having basically a 14-week surgery. I lost the blood flow in my wrist, I had to get screws to set everything back together. For an outside linebacker/defensive end your hand is everything, so it seemed like a really long time just to get that strength back in my wrist and my whole arm, to be honest.”

One player that has caught the attention of the team is Kurleigh Gittens Jr., who has done everything asked of him at camp and looks much more confident than he did during his rookie season. He’s made the switch from jersey No. 80 to No. 19, which he wore as a two-time All-Canadian and four-time OUA All-Star at Laurier. 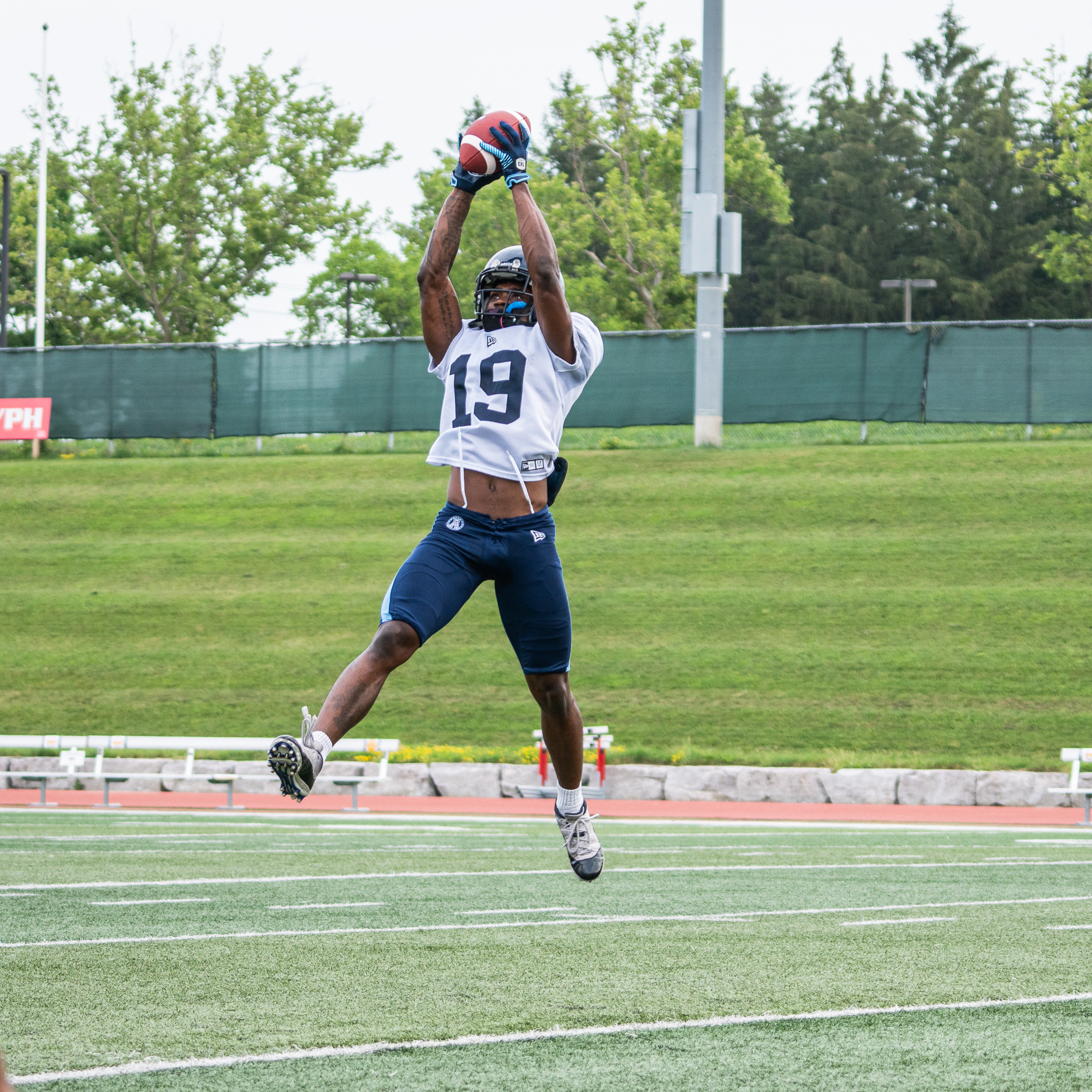 Quarterback McLeod Bethel-Thompson is proving to be quotable in his media appearances. He was philosophical when he was asked about working with yet another head coach and offensive coordinator.