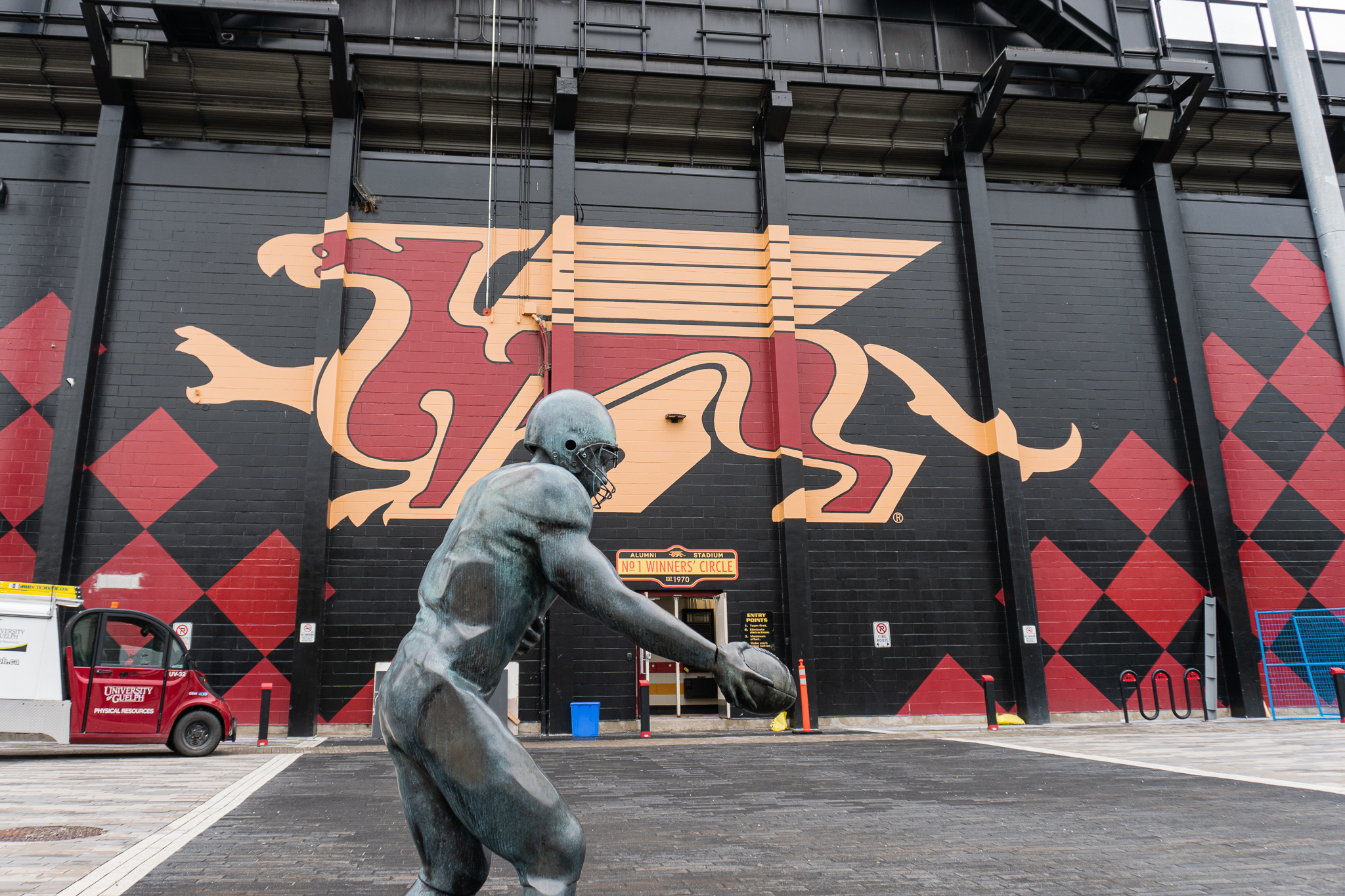 There’s a certain rhythm that comes with the opening of Toronto Argonaut training camp each year. The staff packs up all the gear that’s needed for the four-week period, ships it to the facility, checks in players as they arrive, and then everyone gets to work with a common goal of winning the Grey Cup.

This year’s pre-camp regimen has been vastly different because of COVID-19.

In one sense the choreography of the routine has remained the same, but in reality, several steps have been added. In some respects, it’s become a logistical nightmare, so who better to find out about the added elements than the team’s Coordinator of Logistics.

Alex Russell has been with the Argos since 2019, poached from the Hamilton Tiger-Cats. He says the team was at least somewhat prepared for camp, being held at the University of Guelph after a few seasons at York University.

“We had planned to be here for 2020 and had come down and saw it in December (2019),” he told Argonauts.ca in a socially distanced discussion from the team’s temporary home. “In terms of meeting rooms etcetera, we already had the blueprint for that, but what’s been different are the safety protocols; the testing, the social distancing. Now we need three locker rooms as opposed to one because you have a hundred players who need to be distanced. We needed extra meeting rooms. Each guy has their own townhouse for the quarantine period.”

Guelph’s facilities are the jewel of the U Sports loop, and Russell was quick to add that the university has been great to work with, which has been a massive help.

The Ancaster native’s duties don’t stop with the physical necessities of camp, he’s also the guy responsible for making sure that the American and Global players were able to get into the country to go to work. 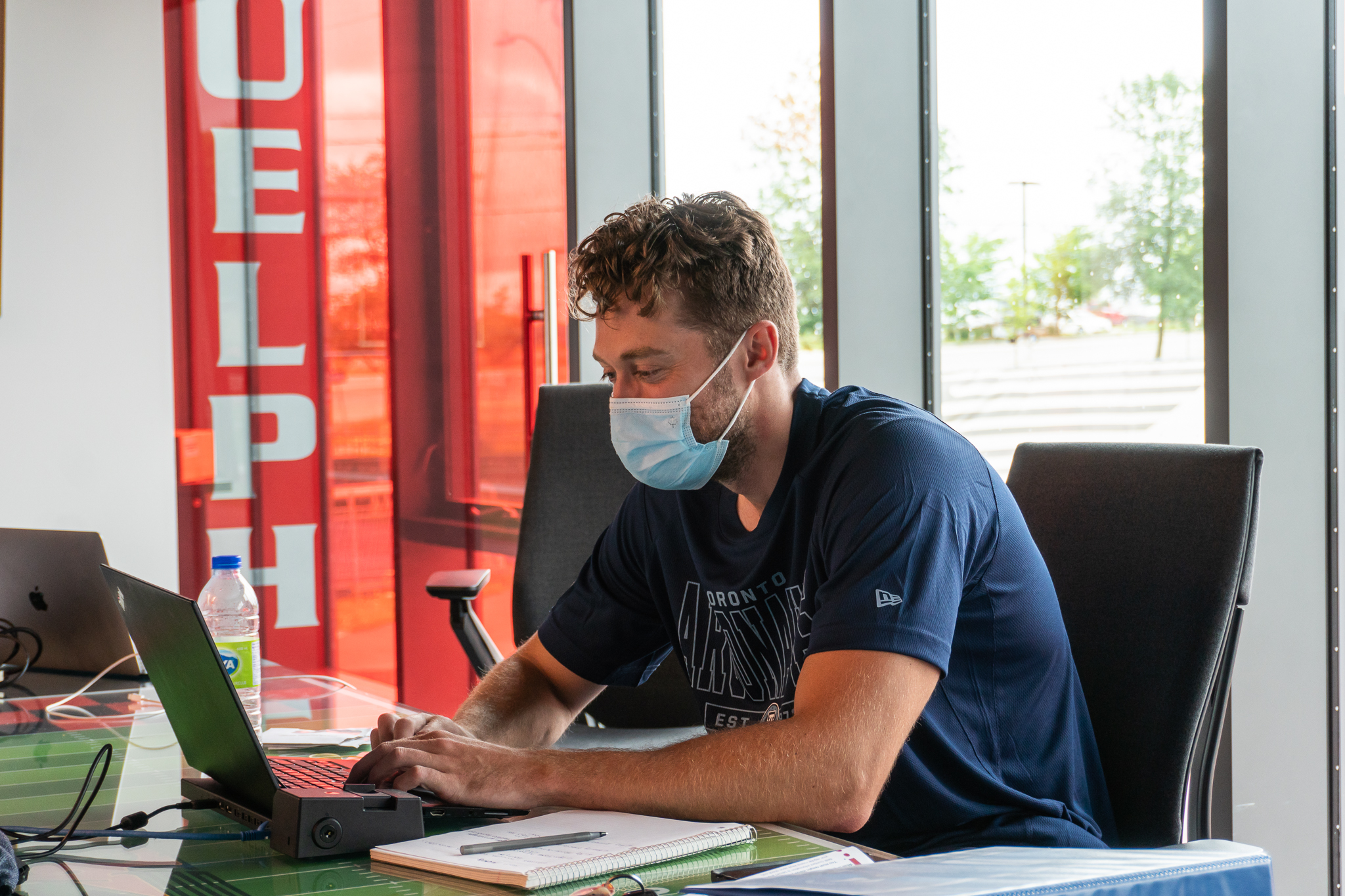 “We had a couple of hiccups with guys missing some of the early flights, but there was nothing checklist related. The CFL has been good, they sent out what they needed. Guys needed a PCR (polymerase chain reaction, or COVID) test within 72 hours of their flight time, an exemption letter, which the league got from the government, and using the ArriveCAN app (which provides pre-flight travel information required before entering the country).”

This year has also been challenging for Danny Webb and his staff. The team’s equipment manager is the longest-tenured member of the organization, joining the Argos in May of 1985. This hasn’t been a normal season for a man who has seen more camps than most, but he’s looking at the positives when he can.

“What helped us a great amount was to be able to come up here on June 28 to start to move in and take over the building,” he told Argonauts.ca. “We really needed that lead time to lay out the room with social distancing guidelines.”

It’s still bittersweet because he may have been the member of the organization most happy with the selection of Guelph as home base for camp.

“I was so looking forward to being here at Guelph because it’s the nicest U Sports locker room in Canada with 110 lockers in total, but we’re only allowed to use about 30 of them. We’re actually using three different locker rooms, with two of them being quite some distance from the field. We’re making the best of it.”

Keeping players distanced in the locker room, or in this case three locker rooms, is a big enough task, but Webb will be a part of the group policing what happens when practices are underway. 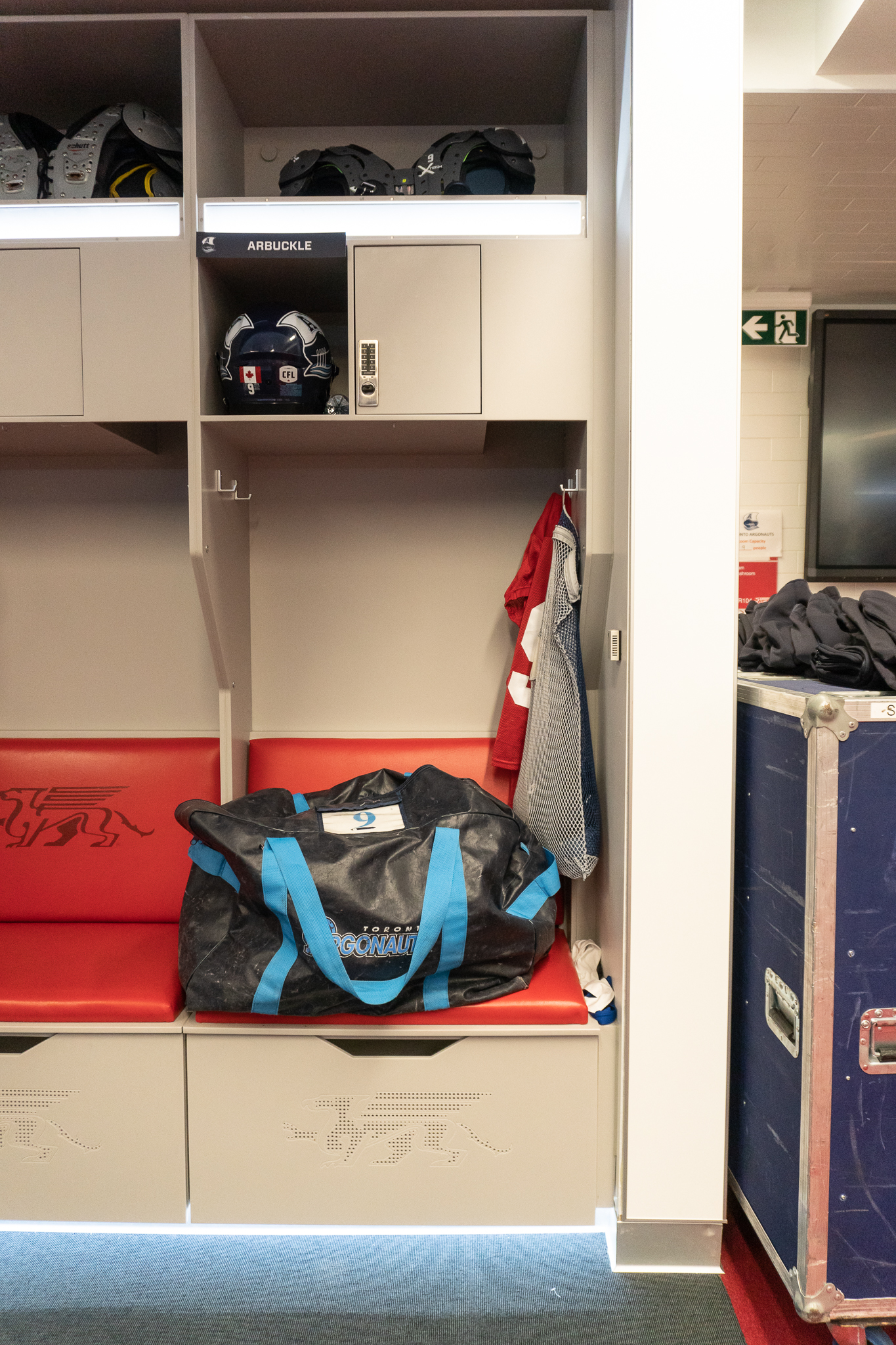 Head Athletic Therapist Josh Shewell has been as busy as anyone in the organization, despite the fact that practices haven’t started yet.

“The testing and following all the protocols and making sure everyone is following them. We have to have every little detail set up to a T, because public health will be watching us closely, and the league will be watching us closely, and of course we don’t want to have an outbreak. There are a lot of very specific details that have to be followed.”

And then there’s the paperwork with all players and staff members doing four tests over a 14-day period, plus the additional pre-flight testing for the international players.

“On the administrative side of things, with the testing and everyone being on their own quarantine schedule based on when they arrive, it’s taken up a lot of our time. We’re doing 140 tests a day through camp, and we’re going to test every other day when camp kicks off on Saturday.”

Luckily Shewell isn’t alone. There are four team certified athletic therapists at camp, including Shewell, who will be joined in camp by six students. They’ll do their best to treat the athletes in less than ideal circumstances.

“The distancing between tables is an issue,” explained Shewell. “We’re spaced out as best as we can to make sure we’re meeting the requirements. In terms of space between us and the player we’re treating it’s not possible. In therapy you’re going to be in close proximity, so we have full PPE (personal protective equipment) and follow what we’re taught and trained to do based on guidelines. In terms of cleaning we’ll do our best just like all other healthcare practitioners across Canada. We’re able to treat, we just have to be more cautious. We’ll be fully covered with shields and the masks on.”

Distancing will also be required between Argo personnel and people who aren’t going through the same stringent protocols as players, coaches and staff. There will be no fans permitted to attend camp for the first week, though that policy will be re-addressed. Media members will also be kept at more than an arm’s length when covering the Double Blue.

Chris Balenovich is the Argos Manager of Football Media. The team is always happy to accommodate media members in their attempt to get stories out to fans, but there are strict guidelines in play in this area as well. 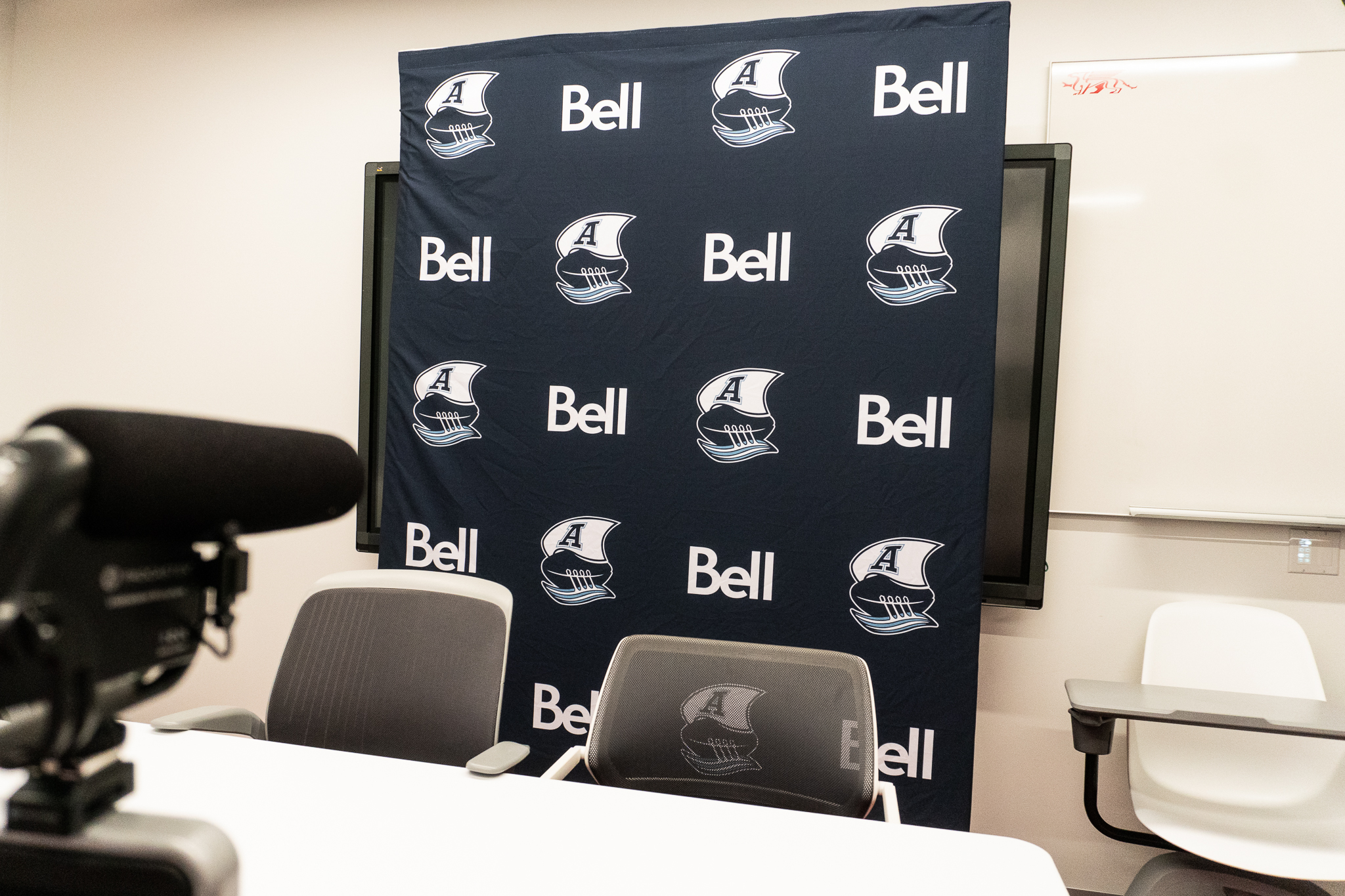 “Everything will be virtual,” Balenovich explained. “Usually, right after practice we do post-practice availability with the media on the field waiting for the players and coaches. We can knock off three or four player interviews at the same time. Now, because we have to do it virtually, there will be one player or coach at a time in front of the camera. It will be a little more time consuming, but at the same time, more media can jump on the call now which is awesome.”

Media members will be met individually at a gate and ushered to the grandstand to make sure they don’t inadvertently come in contact with a player or staff member. They will have to watch practice from that spot, maintaining social distancing guidelines while wearing a mask 100 percent of the time they are at the stadium.

They will have to log in to the Zoom interview from there, as the players will be brought to a room one floor above the main locker room, and some 50 feet down the hall from where the session will be hosted. There will be one player or coach interviewed at a time.

It’s a hectic camp with all departments doing the best job possible to keep everyone safe. But after missing the 2020 season, there’s not a person who isn’t happy to do everything in their power to get back on the field this year.