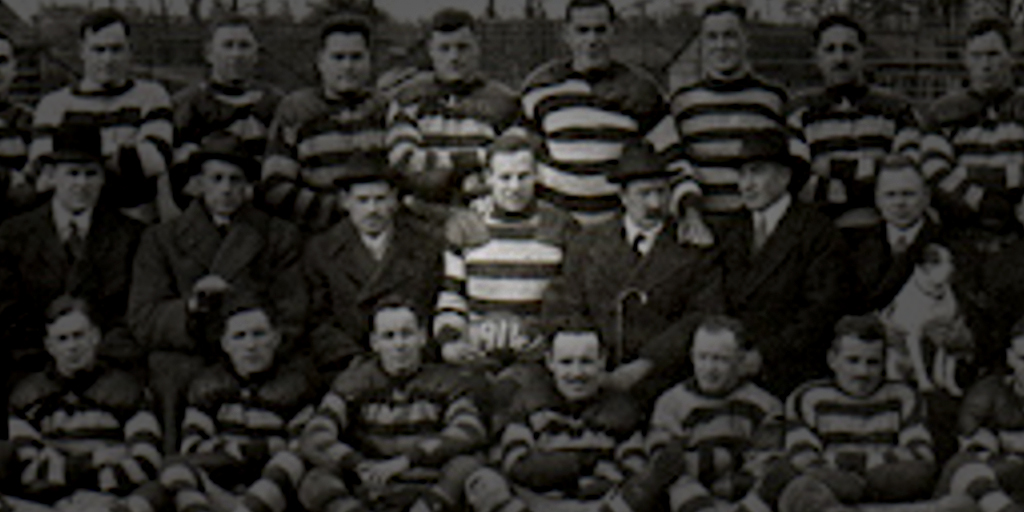 One privilege of researching the long and rich history of the Argonaut Football Club is “rescuing” from the collective amnesia remarkable and moving stories like that of Gladstone Murphy.

An elite all-round athlete and great football player, “Glad” Murphy was the first Argo ever to be named the league’s most valuable player. He was the first captain of the Double Blue to hoist the Grey Cup. Tragically, on February 18, 1916, he died at St. Michael’s Hospital from injuries sustained in a game four months previously.

Could one of the best players ever to don the double blue really be fatally injured on the field without the story becoming as embedded in Toronto sports culture as the stories of Ace Bailey and Bill Barilko?

Born in Kingston in 1889 into a family from Montreal, Glad Murphy grew up in that city and learned to play football as a junior with the famous Limestone club, serving a season as captain of the Limestones juniors in 1905. Like his older brother Ross, who that same year played football and hockey with the Argonauts in Toronto, Murphy was a top teenaged hockey prospect as well as an up-and-coming football player.

In 1908, aged nineteen and employed by the Dominion Bank, he was transferred to a Toronto branch and came west like his brother. That winter his play on defence with the bank’s hockey team attracted press notice.

By the summer of 1909 Glad Murphy had joined the Argonaut Rowing Club, taking up competitive rowing with the famous Double Blue. He happened to be at the clubhouse at the foot of York Street on August 11, 1909, when a massive fire engulfed Hanlan’s Point on the Island. Among seven Argo oarsmen who jumped on a boat to help evacuate guests staying at the Hotel, Murphy and his friend Pat Paterson, after their vessel was loaded up with evacuees and their luggage, swam along behind the craft, pushing a line of floating trunks to safety.

Rowing turned out pretty well for Glad Murphy. He earned an oar on the ARC senior eight-man crew which in 1911, powered by the great Geoff ”Longboat” Taylor at stroke, won both the US and the Canadian national championships. The next year the same crew represented Canada at the Stockholm Olympics, falling in the heats to eventual gold medallists from England.

A world-class rower, hockey nevertheless was Glad Murphy’s best sport. A big, bruising defenceman with offensive flair, with the 1909-10 Argos he established himself as one of the stars of the Ontario Hockey Association. Twelve months later as captain he led the Boatmen to the 1911 provincial finals. That summer he and the eights won their two national rowing titles mentioned earlier, and in the fall Murphy played in the Grey Cup game.

Quite a year for a very special athlete.

Glad Murphy made his Double Blue football debut in 1909. He was blessed with the physique, athleticism and sporting IQ to play any position on the gridiron, but it took the coaching of Ralph Ripley in 1910 to start translating his raw talent into football greatness.

By the 1911 season Murphy, hockey star and champion oarsman, was already an Argonaut legend. On the football field he delighted the crowd with “the way in which he bowled over the opposing tacklers” when he got the ball. That season coach Billy Foulds made the most of Murphy‘s gifts by splitting his playing time between the forward line and the backfield.

In November the Double Blue clinched their first league title since joining the Big Four Interprovincial Union in 1907. They downed the Ontario league champion Hamilton Alerts in the Dominion playoffs, but fell 14-7 to the University of Toronto in the club’s historic first appearance in a Grey Cup final.

Twelve months later the same three clubs were back in the playoffs. This time the Boatmen upset the Blues in the semi-final only to drop the final 11-4 to the Alerts — still considered one of the great playoff upsets in Canadian football history.

For Glad Murphy this embarrassing defeat followed on the heels of Olympic heartbreak in July. To make matters worse, after the Grey Cup he quickly had to find a new hockey club when the Boatmen, after a taxing Olympic year, decided to take a break from hockey.

In the good old days, the @ArgonautRowingC ran a top-flight hockey club along with their football club.

Star defenceman Glad Murphy captained the Argonaut hockey team to the Ontario finals in 1910-11, three years before becoming captain of the @TorontoArgos pic.twitter.com/UNpkdCvAoW

After tumbling from the highs of 1911 to the lows of 1912, the Argos struggled through the 1913 football season. It was now that Glad Murphy blossomed into the unquestioned heart and soul of a team that needed those qualities. As the curtain came down on a tough 3-3 season, it seemed as though Murphy had provided the silver lining among the clouds that had engulfed the Double Blue. The football writers in the Big Four cities, observing that “the whole Argo play revolves around him,” named him a finalist for league MVP honours.

To nobody’s surprise his teammates elected Murphy their captain in 1914. Rising to the occasion, the six-year veteran led the Argos back to the playoffs. To get there, the Double Blue had to win a truly epic tie-break match-up against the Hamilton Tigers to resolve a deadlock for first place in the standings. Directed to play a tie-break game in Hamilton for all the marbles, the ancient rivals battled to a 9-9 tie. In the dying minutes Murphy saved the Boatmen’s season with a spectacular diving catch on defence. The draw meant a second tie-break game a week later in Toronto, which the home team won 11-4.

Having reached the Dominion playoffs, the Argos squeaked past the Hamilton Rowing Club 16-14 in the semi-final, thanks again to their captain, who dazzled the crowd by taking a lateral pass 80 yards for a touchdown. Murphy scored another touchdown in the Grey Cup game as the Boatmen trounced U of T and took home the Canadian football championship for the very first time in club history. For their victorious captain the final seal was set on this historic campaign when the Big Four league presented Glad Murphy with the Harper-Presnall Award as MVP, making him the first Argo to earn that distinction.

The achievement of the 1914 Argonauts came against the backdrop of the outbreak of the First World War in August, which had deprived the Double Blue of the services of manager Ross Binkley and five first-team players. In the spring of 1915 Binkley and three of these regulars were killed in action on the Western Front, including Murphy’s old rowing mate, Longboat Taylor.

Like these athletic-heroes-turned-real-life-heroes, Glad Murphy enlisted for military service in 1914. As luck would have it, he played football and won a Grey Cup that fall because he did not receive the call-up that Longboat and the others received. In 1915 he decided to retire a champion — and as reigning league MVP — to focus on honing his aviation skills while awaiting his imminent transfer overseas by the air force.

The Argos reached out hopefully. Murphy went along to camp, telling the press he was there merely for some exercise with old friends. Nobody was fooled.

After a couple of days of workouts, to nobody’s surprise, Murphy decided to suit up for the opening game of the season on October 9, 1915, a match at the Boatmen’s home ground of Rosedale Field against their ancient foes from Jungle Town.

It was a fateful decision. Of the worst possible kind.

In the third quarter of a close game, no doubt somewhat rusty after missing training camp, Murphy misjudged an open-field tackle on Sammy Manson, the Tigers’ best player. Losing his balance as he lunged, he landed awkwardly, head first.

He would never move again.

In the days that followed, witnesses debated and disputed what they recalled seeing. Murphy himself recalled losing his grip after getting “partial hold” of Manson. Some in the Toronto papers attached a measure of guilt to Manson. Glad Murphy himself rejected that insinuation without reservation.

Having been attended to on the field by an old teammate, acting Argonaut medic Smirlie Lawson, one of the most respected physicians in Toronto, the stricken Murphy was carefully removed, fully conscious, from the field on a table-top and taken to St. Michael’s Hospital. A fatal neck fracture was diagnosed. Death was expected at any moment.

Meeting first thing on Monday morning, the Argonaut governors decided to suspend football operations for the balance of the season. Their opposite numbers in Hamilton, Ottawa and Montreal offered sincere regrets and sympathies but pleaded with them not to close up shop. After further deliberations the Boatmen reluctantly rescinded the suspension.

Seven weeks later, with the stricken star’s life still in limbo, the Argos and the Tigers played a benefit game at Rosedale before a capacity crowd of some 10,000 onlookers in support of his widowed mother Catherine and the Murphy family. The full house on November 27 — “Glad Murphy Day” — included over 500 Hamiltonians. Several Tigers governors who attended the game insisted on paying $25 each for their $1 field-access passes. After the game Murphy’s hockey teammates from St. Michael’s University College bought the autographed game-ball at auction for $200 and gifted it to the Tigers organization, “in appreciation of the kindness and sportsmanship of the Hamiltonians.” All told, Glad Murphy Day raised in excess of $4,000 in support of his care, equivalent to about $90,000 today.

When reigning league MVP Glad Murphy was critically injured playing for the @TorontoArgos in 1915, the Tigers and the Boatmen played an exhibition benefit game for his family that raised almost $100,000 in 2021 dollars.#PullTogether pic.twitter.com/ElB75fKiWc

At Christmas Murphy’s condition finally began to worsen. It was decided to attempt to ease his accompanying discomfort with surgery. Assisting in the operation performed by Dr. Herbert A. Bruce, professor of surgery at U. of T. and superintendent of Wellesley Hospital, was the Argonaut club doctor Smirlie Lawson, the patient’s old teammate.

Glad Murphy breathed his last a few weeks later on February 18 — 132 days after he was injured. His sister Grace, an Ursuline nun, was with him at the end.

One Toronto sportswriter lamented the news of Murphy’s death as “the most regrettable occurrence in connection with any sporting affair in this city in a generation.” A writer back in his hometown of Kingston remarked that “he was probably the best all-round athlete in Canada.”

This is not the place to attempt to understand how Glad Murphy came to be forgotten in Toronto. This much can be said: the Argonaut club to which he brought such sporting glory before the First World War did not easily forget him. Neither did the fans.

In 1938 an anonymous former Argonaut player donated a trophy, the Glad Murphy Memorial Trophy, to be awarded to the club winning the Big Four’s new junior championship. After the disruptions of the Second World War, the Argos re-dedicated the Murphy Trophy in 1946 to serve as the championship trophy of a new junior football league in southern Ontario backed by the club. The fate of this trophy is not clear at present.

Ten years later the ARC sold the Argos to a corporate ownership group that made no further attempts to memorialize Glad Murphy.

As for the fans, Mr. R. F. Cassels, the Argos’ answer in the Seventies to today’s “superfan” phenomenon, remembered Glad Murphy well enough, over seventy years later, to tell an interviewer in 1979 about personally witnessing the sad accident as a boy at Rosedale.

The Rowing Club and the fanbase made real attempts to keep the story of Glad Murphy alive. Perhaps we today can give it a new lease of life.