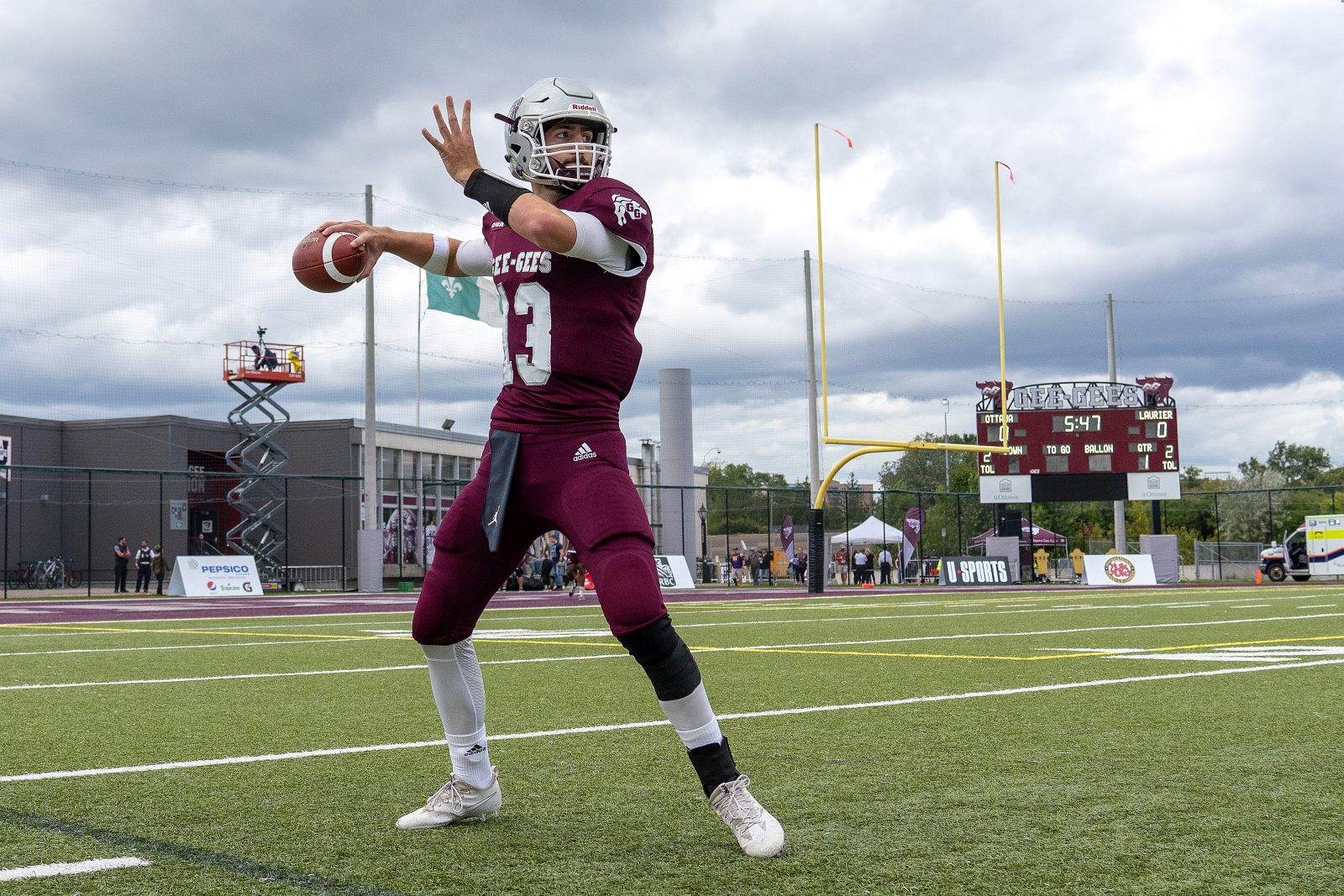 There was a spectacular video the CFL released a few years ago called “This Is Our League.” Toward the end it mentioned several players from different ethnic backgrounds who came together to create a great league, highlighting the league’s diversity.

In the CFL, recent high-profile Indigenous players are hard to find, in fact, to find a dominant athlete you have to go back a fair bit. Jack Jacobs, from the Muscogee Creek people of Oklahoma, is in the Canadian Football Hall of Fame. In Argo lore, he was Winnipeg’s quarterback in the Blue Bombers 1950 “Mud Bowl” Grey Cup loss to Toronto at Varsity Stadium.

The Boatmen hope that changes a year from now after using the 12th-overall pick in this year’s CFL Draft on New Mexico State offensive lineman Sage Doxtater, who grew up on the Oneida Nation of the Thames, a little southwest of London.

How does Canadian football serve a community that isn’t being represented at the game’s highest levels?  Jim Mullin is the President of Football Canada. He says that while there are a couple of programs in place, more work needs to be done. Football Canada does have an Aboriginal Football Outreach program in place, it just needs to be strengthened.

“One of the things we’re getting off the ground with our Diversity Task Force is a program that mentors leadership in the BIPOC community,” Mullin said in a phone interview with Argonauts.ca. “There is an awareness that Indigenous coaching leaders need to take root in these communities across Canada. We’ve got the funding to create a mentorship program to bring on BIPOC coaches at the provincial level, the U-18 level, the U-16 level, for that level of high performance. I think that’s a good starting point because where there have been programs launched focusing on Indigenous football development, they haven’t necessarily sustained themselves because we haven’t had champions in those communities.”

If you’re looking for a current player as a role model for kids in high school and younger, Ben Maracle would be a good choice. He’s from the Tyendinaga Mohawk reserve, nestled just east of Belleville. In 2019, Maracle entered his redshirt freshman year as a backup quarterback at the University of Ottawa. When the starter was injured in the season opener, the youngster was given the opportunity to take the QB1 job.

The Gee-Gees went 4-1 in his starts but lost in the first round of the playoffs. While he struggled at times, the team was so impressed by his play he was named the Gee-Gees’ MVP at season’s end. 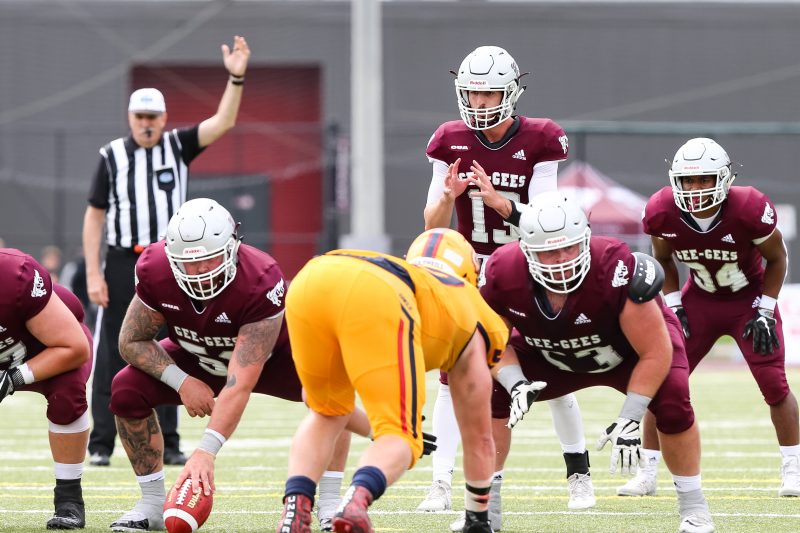 When he was in his football infancy, finding kids to play football with on the reserve wasn’t easy.

“I wasn’t completely alone playing football,” Maracle told Argonauts.ca in a phone interview. “The majority of the people who came from the reserve went to Moira (Secondary School in Belleville) and would eventually play football, but there were never any summer leagues because a lot of the kids were playing lacrosse.”

When looking for prominent Indigenous role models in the sport, the search is frustrating. South of the border isn’t much better, though quarterback Sam Bradford, the first-overall pick in the 2010 NFL Draft, another Oklahoman and a citizen of the Cherokee Nation, is a recent star player of Indigenous descent. If you want to go way back, Hall of Famer Jim Thorpe, yet another Oklahoman, was a member of the Sak and Fox Nation and is recognized as one of the greatest athletes of all time.

While he was growing up, Maracle found a couple of mentors; not high-profile pro athletes mind you, but teachers.

“I first looked up to Jamie McCourt, who is Indigenous,” he recalled. “He liked the (New England) Patriots and that’s what got me into football. I would stay inside at recess and he would show me Tom Brady highlights and that’s what made me fall in love with playing quarterback and leading a team. Another teacher at the school, Justin Shakell, is also Indigenous and played defensive end at Laurier. He was a great guy to really look up to and he pushed me in the right direction.”

Shakell was exceptionally good at the university level. He was twice named Laurier’s MVP, was a two-time OUA All-Star, an All-Canadian in 2003 and was inducted into the Laurier Sports Hall of Fame in 2009. He now works with Maracle’s mother at Quinte Mohawk School in Deseronto.

Maracle had one person to help him develop a love for the sport, another with a playing pedigree to help inspire him to reach the next level; both Indigenous, both leaving an imprint.

They weren’t the only ones though, as Maracle also talked about the impact Warren Goldie had on him when the young QB was 15-years old. Goldie quarterbacked Western to the 1994 Vanier Cup championship before coaching at Queen’s and St. FX at the university level, as well as amateur teams like the Kingston Grenadiers, a team that featured Maracle.

Goldie not only understood how to help his protege on the field but comprehended and respected his background.

“He really understood my quiet nature,” Maracle explained. “He understood how it had to do with my culture. Growing up in a longhouse you don’t speak over people and you wait for your turn. It could be a challenge when you’re coming onto the field with people who just don’t have that background and he really understood that. It was probably the hardest part of the position, because people wanted me to be that vocal leader. With my culture I really wait for my turn and am very much a listener. I like to learn from people, it’s the way my personality has matured.”

Maracle exudes a quiet confidence in conversation. You can hear in his voice that he possesses tremendous leadership qualities, despite not being an over-the-top vocal leader. He has a suggestion about how to improve the popularity and growth of the game with Indigenous youth, and it echoes Mullin’s main point.

“I would have to say it has to do with mentorship. The reason that I’ve been able to excel is because of the people I’ve surrounded myself with. If I hadn’t met Warren Goldie when I did, I think I’d have had a very difficult time getting to where I have.”

The more he plays the game at a high level and the more chances he has to excel in a position of leadership expands the amount of information he has to offer younger athletes. Does he want to become a mentor to kids when his playing days are over?

“Absolutely,” he said without a second of hesitation. “It’s something I plan on doing eventually, bringing what I’ve done back to reserves and being that person I didn’t have when I was younger.”

Perhaps one thing that could be done to encourage participation would be to get the Six Nations Challenge out of mothballs. It was a six-man tackle tournament that was supposed to happen every four years but hasn’t been held since 2014.

“Under some of the previous leadership it wasn’t made a priority,” he confessed. “When I became president (in June 2019), I wanted this to become a priority, but unfortunately we ran straight into Covid and all of our events were cancelled. It’s allowed us the time to revisit what Six Nations Challenge is. I think it can be something bigger if we include flag football. I see this as a great point of growth for us coming out of the pandemic.”

With increased dedication in terms of mentorship and opportunity, there’s potential for substantial growth for football in Indigenous communities. The challenge now is to find a way to provide those districts with both.