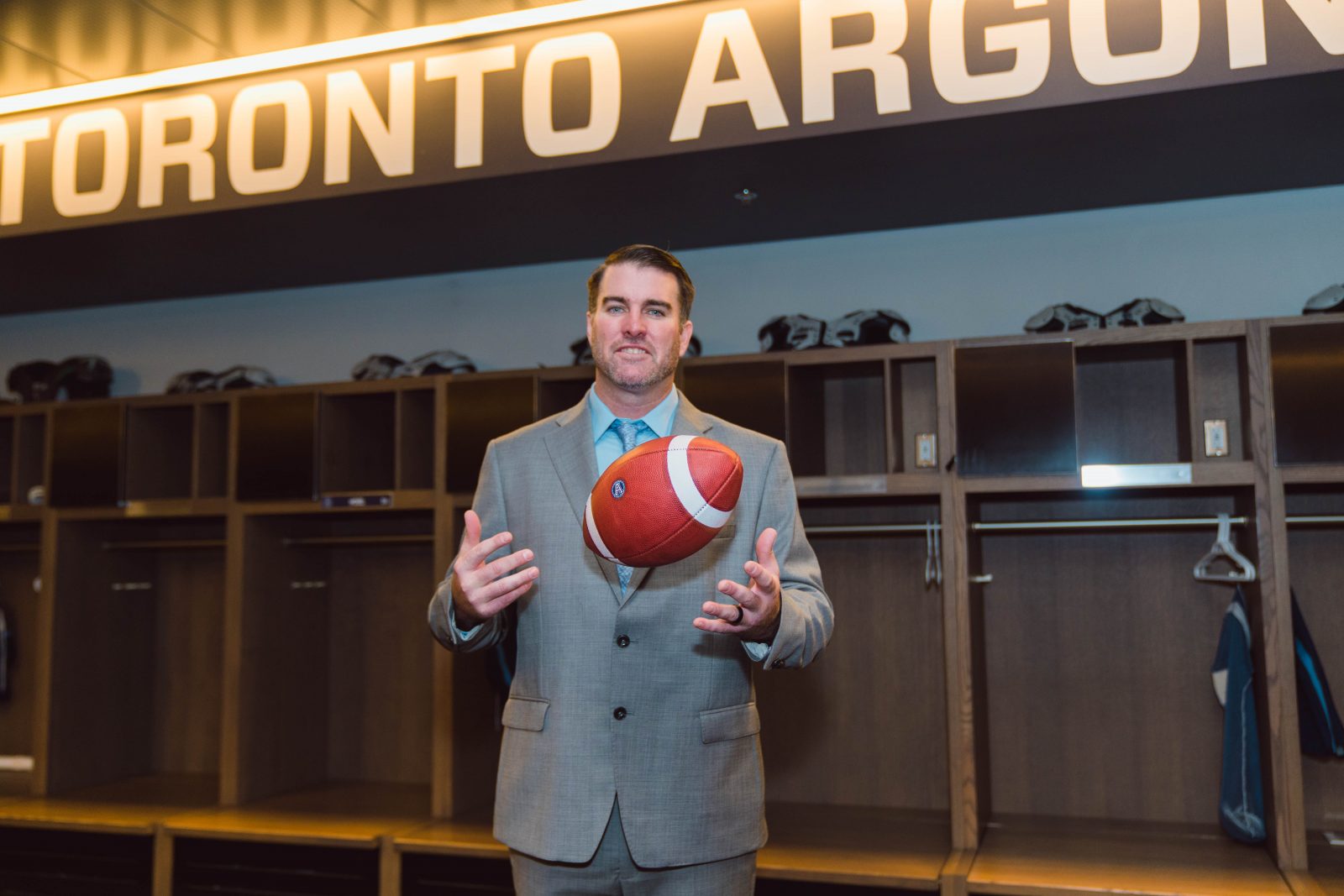 TORONTO – The Toronto Argonauts Football Club announced today their coaching staff for the 2021 season who will work under head coach Ryan Dinwiddie. The coaching staff remains the same from what would have been the 2020 season with one change. Joshua Bell will replace Ike Charlton as defensive backs coach. Jarious Jackson will be offensive coordinator and quarterbacks coach, Glen Young remains the defensive coordinator and Mark Nelson will run special teams. Kevin Eiben is back as linebackers coach and special teams assistant, Stephen McAdoo will coach the offensive line, Markus Howell is the receivers coach, Fred Reid will look after the running backs, Mike Davis continues as defensive line coach, and Merritt Bowdenassumes assistant defense and special teams coaching duties.

Dinwiddie, hired in December of 2019 is still waiting for his head coaching debut after a 2020 lost season. He was the quarterbacks coach for the Calgary Stampeders from 2016-2019 and was been instrumental in developing Bo-Levi Mitchell into a two-time CFL Most Outstanding Player under his tutelage. Under Dinwiddie, Mitchell led the league in touchdown passes twice and finished in the top three in passing yards three out of the four years including leading the league in 2016. The California native also helped current Argos QB Nick Arbuckle blossom into a future starting pivot after being pressed into service once Mitchell went down in 2019, throwing for over 2,000 yards and 11 touchdowns in nine games. With Dinwiddie guiding the signal-callers, the Stamps reached the Grey Cup three years in a row (2016-2018), hoisting the trophy 2018.

Previous to his time in Calgary, Dinwiddie coached in Montreal for three years (2013-2015) in various capacities, including offensive co-coordinator, quarterbacks, offensive quality control and running backs coach. As running backs coach for the Als in 2015, the team led the East in rushing and helped Tyrell Sutton win the league’s rushing crown.

The former quarterback played five seasons in the CFL, three with Winnipeg (2006-2008) and two with Saskatchewan (2010-2011). Coincidentally, the QB’s first ever CFL start came in Toronto at SkyDome during the 2007 Grey Cup vs Saskatchewan when he was a member of the Bombers. Dinwiddie played college football at Boise State where he is widely considered to be the best quarterback in Broncos history after a record setting career there.

Jackson joins the Argos staff after spending the two previous CFL seasons in B.C. as offensive coordinator and quarterbacks coach. Previous to his time with the Leos, the former pivot was the QB coach and passing game coordinator for Saskatchewan in 2016 and 2017; two titles he also held with Edmonton in 2014 and 2015, helping guide Mike Reilly and the Esks to a 2015 Grey Cup championship, his first as a coach and fourth overall. The Mississippi native began his coaching career immediately following his playing days by taking over QB coach duties for the Lions in 2013.

Young spent the past four seasons coaching in Winnipeg, with the last two as linebackers and defensive line coach. The Scarborough native helped the Bombers defence lead the league in rush yards allowed (64.2/game) and guided defensive lineman Willie Jefferson to his first Most Outstanding Defensive Player award in 2019. Young was a key part of the Bombers defence in 2018 that led the league in sacks (45), forced turnovers (49) and finished second in the CFL in fewest points allowed (20.8/game). Before his time in Winnipeg, Young coached the defence at The College at Brockport after a stop at Hampden-Sydney College in Virginia as the linebackers and special teams coordinator.

An original third-round draft pick of the Hamilton Tiger-Cats in 1992, the linebacker began his pro career with the San Diego Chargers in 1995, playing 22 games over two seasons with the NFL team. The Syracuse alum then played three seasons with his hometown Boatmen (1998-2000) before a year in Montreal (2001) and finishing in Edmonton (2002-2005). All in all, Young played 122 career CFL games tallying 262 tackles and seven sacks while winning two Grey Cups (2003, 2005).

Nelson, a coaching veteran of nearly 30 years including 17 in the CFL, coached six seasons in the nation’s capital (2014-2019) as the Redblacks linebackers coach and was also the team’s defensive coordinator from 2014-2017, winning a Grey Cup with the team in 2016. Previous to Ottawa, Nelson made coaching stops in Montreal (2013), Edmonton (2010-2012) and Winnipeg (2009) where he coached linebackers and was the defensive coordinator in ’09 and ’12. Between 1997 and 2008, the Edmonton, Alberta native coached various positions on defense and special teams in the U.S. college ranks with Louisville, Tulsa, Baylor, Kentucky, Arkansas Tech and Valdosta State. Nelson began his coaching career in the CFL in Edmonton where he coached special teams, linebackers and running backs from 1992-1994, winning two Grey Cups, before moving to the San Antonio Texans in 1995 and Toronto in 1996, where he would win another championship.

The former linebacker and fullback played seven years in the CFL for the Calgary Stampeders and Saskatchewan Roughriders after being drafted by the Stamps in the 1980 CFL Draft.

Eiben is back for his fifth coaching season on the Double Blue coaching staff and will once again coach linebackers and assist with special teams, something he is familiar with after serving as the Argos special teams coordinator from 2017-2018. Previous to his time coaching in the CFL, the British Columbia native was the defensive coordinator at the University of Toronto from 2014-2016 and the DC at McMaster University in 2013. Eiben spent 11 seasons as a linebacker in Toronto and ranks second in CFL history for tackles by a Canadian player and his 113 tackles in 2005 is still a league record for tackles in a season by a Canadian. A fourth-round draft selection by Toronto in 2001, Eiben would go on to be a three-time CFL All-Star and five-time East All-Star as well as being named the Argos Most Outstanding Player in 2004, a year they went on to win the Grey Cup. Eiben would finish his career in Hamilton in 2012.

McAdoo coached his fourth season in Saskatchewan in 2019 as assistant head coach and offensive coordinator, helping Riders’ QB Cody Fajardo become the league’s passing yards leader and William Powell finish second in rush yards and leading all running backs with 12 touchdowns. McAdoo’s offence finished third in the CFL in rushing in 2019 and second in 2018 with over 2,000 rush yards each year. Before joining the Riders, the Tennessee native spent two years as offensive coordinator in Edmonton (2014-2015) guiding Mike Reilly and the Eskimos to a 2015 Grey Cup championship. McAdoo returns to Toronto after a four-year stint as the Argos offensive line coach and run game coordinator from 2010-2013, helping the Boatmen lead the league in rushing in 2011 and winning the Grey Cup on home soil in 2012. McAdoo’s first foray into CFL coaching came with Montreal between 2003 and 2007 where he was offensive line and running backs coach as well as co-offensive coordinator. Before starting his CFL coaching career, McAdoo was the tight ends and offensive line coach at Middle Tennessee State (1999-2000) and tight ends coach at his alma mater, Middle Tennessee State (1996-1998).

The former offensive lineman at the aforementioned Middle Tennessee State signed as a free agent with the Cleveland Browns following school in 1993, before spending the 1994 and 1995 seasons with the Shreveport Pirates during the CFL’s expansion into the U.S.

Howell joins the Argos staff as receivers coach, coming over from B.C. where he spent the last two seasons in the same capacity. The Winnipeg native also coached pass catchers in Saskatchewan in 2016 and 2017 as well as Winnipeg from 2012 to 2015. The former receiver began his coaching career immediately following his playing career in 2011 by coaching linebackers and assisting with special teams for the Blue Bombers. Howell is an 11-year CFL veteran with Winnipeg (2000-2004, 2010), Ottawa (2005) and Calgary (2006-2009) and registered 152 receptions, 2,093 yards and nine receiving touchdowns to go along with 2,232 punt returns yards and one return touchdown in 176 career games. The versatile Howell also played some defence in his career totaling 28 defensive tackles, 21 special teams tackles with one forced fumble and was a member of the 2008 Grey Cup champion Calgary stampeders.

Reid will lead the Double Blue backfield in 2021, a position the sixth all-time leading rusher in Bomber history is familiar with. The former RB was the head coach at Middleton High School in Florida from 2014-2018. After a short playing stint with the Tampa Bay Buccaneers in 2005 and the Mississippi Mudcats of the American Indoor Football Association in 2007, the Tampa native headed north to Winnipeg. After five seasons in blue and gold, Reid racked up 4,505 rushing yards and 22 touchdowns while being named an East All-Star three times (2008-2010) and a CFL All-Star in 2010, the same year he led the CFL in rushing with 1,396 yards.

Davis will be the team’s defensive line coach after four seasons in Saskatchewan. The Virginia native joined the ‘Riders in 2016 as Manager of Player Personnel until 2019 when he made the switch back to coaching, where his defensive line was integral in helping the Rider’s tie for the league lead in sacks (56) and finish second in rush yards allowed (92.6). The Virginia Tech alum spent six seasons as head coach of the Arena Football League’s Nebraska Danger (2010-2016), winning three straight conference championships.

Bell joins the Argos after coaching the defensive backs in Calgary for two seasons (2018-2019). Bell played for those same Stampeders from 2014-2017, where he was a West Division All-Star in 2015 and helped the Stamps win the Grey Cup in 2014. Prior to joining Calgary, the former Baylor Bear played two seasons with the B.C. Lions. The Los Angeles native played 13 games over two NFL seasons (2008-2009) with the Denver Broncos and Green Bay Packers, winning a Super Bowl as party of the Packers in February of 2010.

Bowden will be the Argos Defensive and Special Teams Assistant this season after coaching in Saskatchewan from 2016-2018. The Alabama native coached the ‘Riders defensive line in 2018, helping the defence finish second in the CFL in rush yards allowed (92.0/game). Previously, Bowden coached Saskatchewan’s linebackers and was special teams assistant coach in 2017 as well as special teams assistant in 2016. The former minor league baseball player in the Atlanta Braves organization coached high school football from 1994-2015 with a two-year stop as a defensive assistant at Auburn University in 2004-2005. 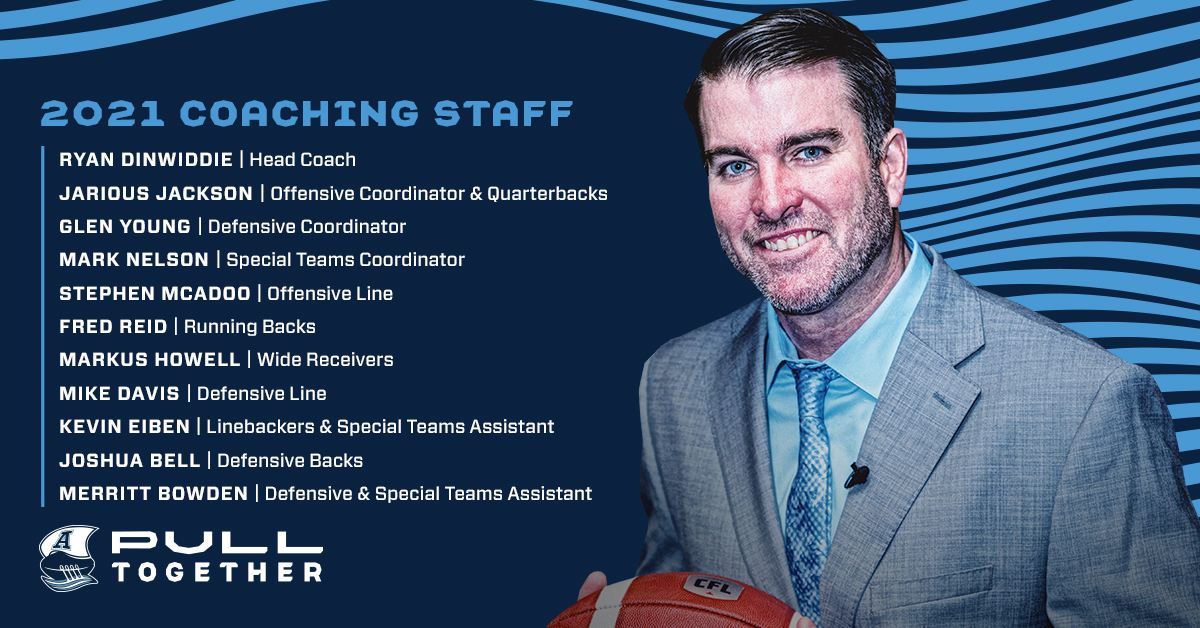