Steinauer and Wilson to be inducted into CFHOF 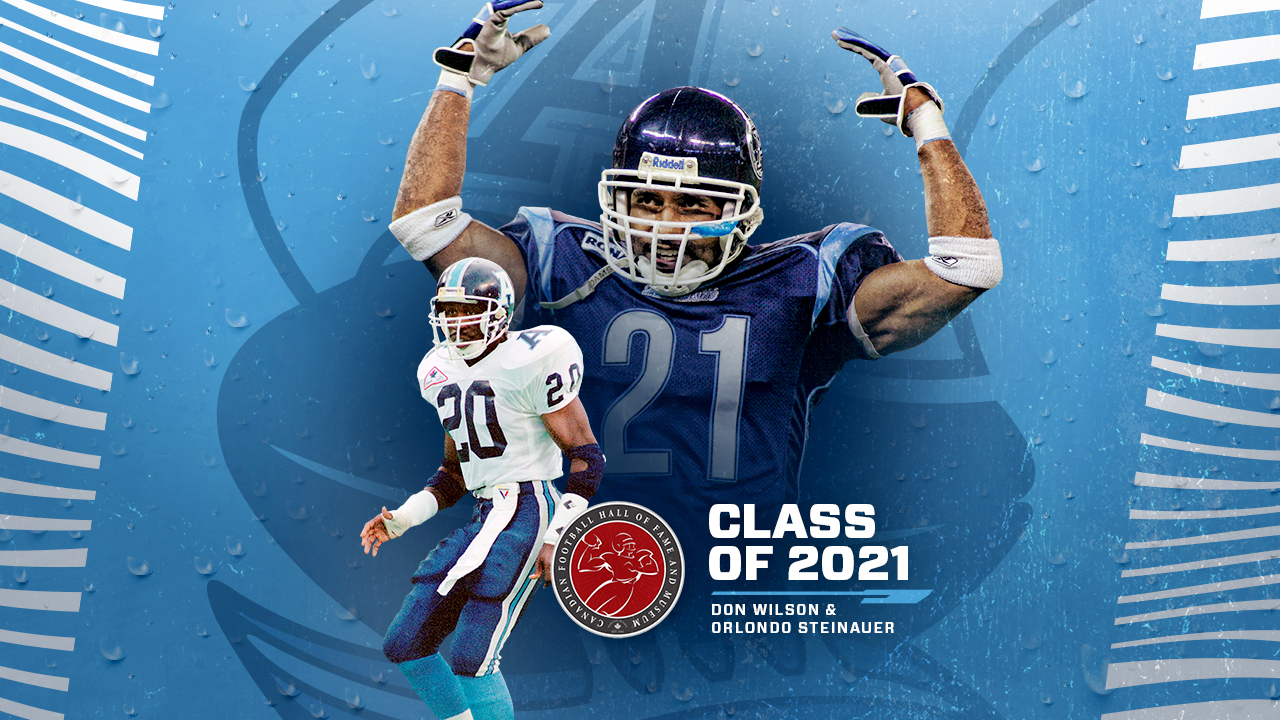 Steinauer and Wilson to be inducted into CFHOF

TORONTO – The Canadian Football Hall of Fame announced today that two former Toronto Argonauts, DB Orlondo Steinauer and DB Don Wilson, will be enshrined in their hallowed halls as part of the 2021 induction class.

Steinauer played 13 seasons in the CFL (1996-2008), where he was named a Division All-Star seven times, a CFL All-Star five times and won two Grey Cups. Eight of those 13 seasons were spent in Toronto (2001-2008) where the Seattle, Washington native would be awarded four of his five CFL All-Star nods and five of his seven Division All-Star nominations, while helping the Argos capture the 2004 Grey Cup. Steinauer was Toronto’s nominee for Most Outstanding Defensive Player in 2002. The defensive back debuted in the CFL with Ottawa in 1996 before a move to Hamilton a season later, where he would win his first Grey Cup in 1999 and be nominated as Hamilton’s Most Outstanding Player and Defensive Player in 1997. Steinauer piled up 604 defensive tackles in his career (18th all-time), intercepted 49 passes (15th all-time) including eight multi-interception games, returned five for touchdowns (10th all-time) and his 1,178 interception return yards are second all-time in CFL history. Following his playing days, the Western Washington alum would join the Argos coaching staff in 2010 until 2012 under various roles including defensive coordinator and defensive backs coach, winning his third Grey Cup in 2012 on home soil in Toronto. He is currently the Head Coach of the Hamilton Tiger-Cats.

Wilson spent 12 seasons in the CFL (1987-1998), winning four Grey Cups with six Division All-Star nods and four CFL All-Star awards. The Washington, D.C. native played two stints with the Double Blue, from 1990-1992 and 1995-1996, winning two Grey Cups in that time, while being nominated as a CFL All-Star twice and East Division All-Star three times. Wilson was the Argos nominee for Most Outstanding Defensive Player in 1995 and was named to Toronto’s All-Time Team in 2007. The North Carolina State alum also played six seasons with Edmonton and one with B.C., winning another two Grey Cups and two league All-Star awards with Edmonton. All in all, Wilson played 197 games and racked up 667 defensive tackles (11th all-time), 61 interceptions (5th all-time), including five returned for touchdowns and 1,046 interception return yards (4th all-time). The DB tallied 15 fumbles recoveries for 206 yards and three touchdowns, while adding 18 sacks and 20 special teams tackles. His eight defensive return touchdowns rank third all-time.