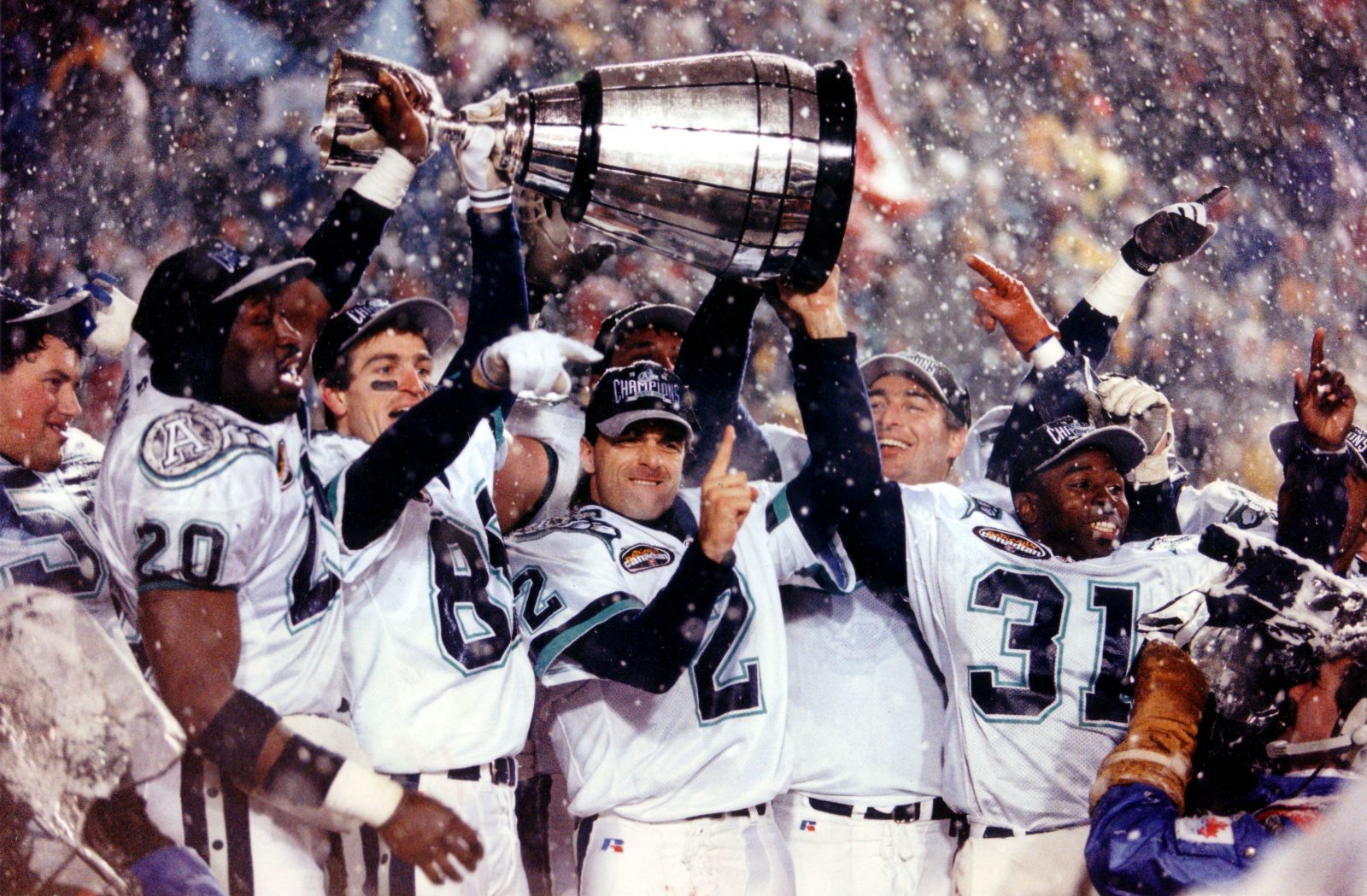 Don Wilson was a part of perhaps the most iconic photograph in the annals of the Toronto Argonauts. Today his place in history as a player is secure, as it was announced he is one of two former Argos who will be inducted into the Canadian Football Hall of Fame this November.

Orlondo Steinauer will also be inducted, as No. 21 becomes a member of the Class of ’21. It’s far from the first time his name and the word “class” have been used in conjunction with one another.

Both were defensive backs, both were Argos twice, and both are remembered not only for their immense talent but for their engaging, yet different personalities.

It took a while for Wilson to get this recognition as he retired after the 1998 season. There is no question his ability is Hall worthy; fifth in all-time interceptions with 61, a six-time divisional All-Star, a five-time CFL All-Star, the Argos Most Outstanding Defensive Player in 1995, and the winner four Grey Cup rings, including in 1991 and 1996 with Toronto. 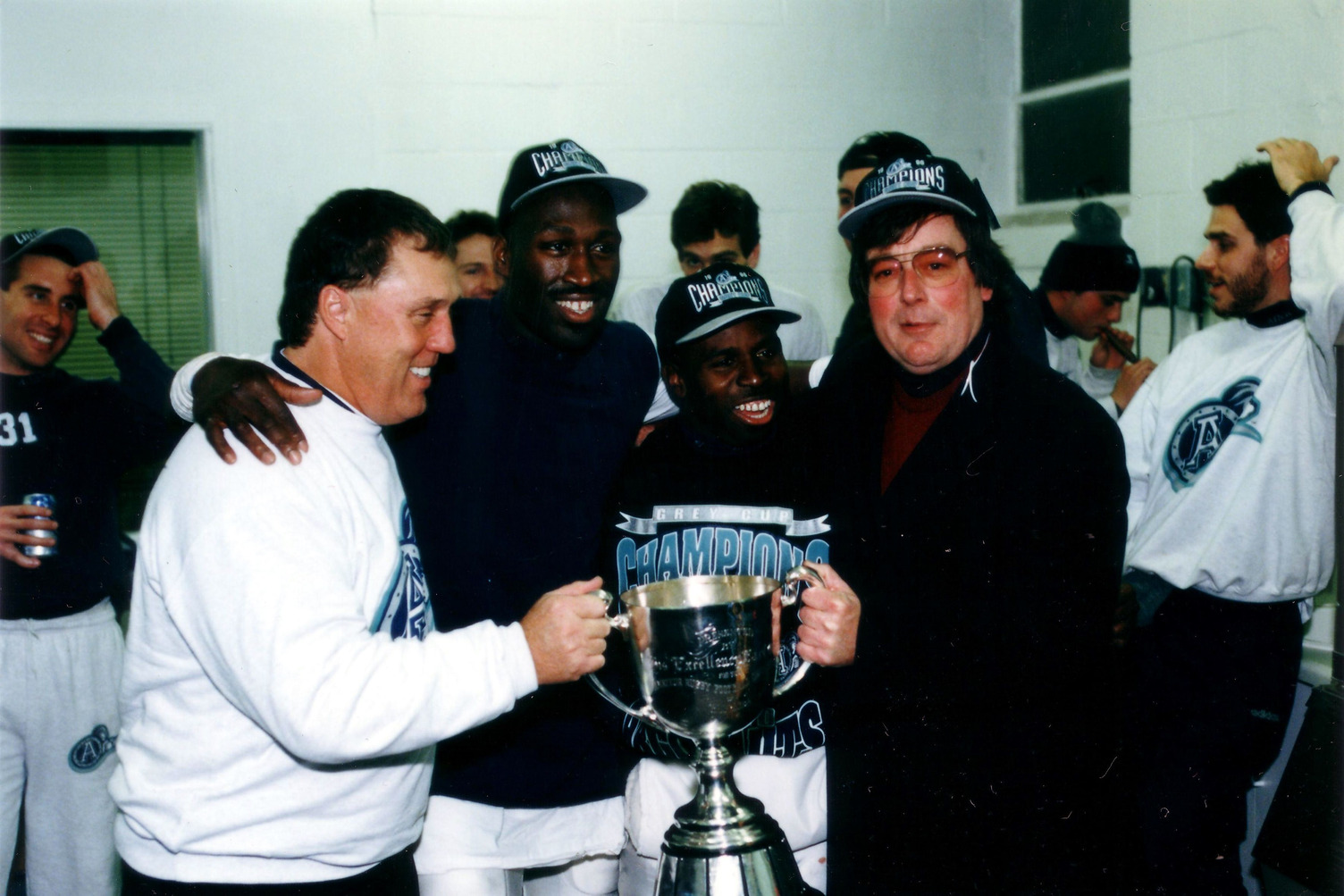 He was also a coach’s dream, as he played virtually every spot in the secondary. Because you couldn’t pin him down to one just position, it may have hurt him with the selection committee when it came to receiving the Hall-of-Fame nod.

“I didn’t think about it that way,” he said after Argonauts.ca made that suggestion during a video media conference. “I did think ‘where would they put me?’ because I’ve been so many places. But I was hoping because wherever they put me, I played it well. I was hoping the versatility would also help me, especially when they expanded to playing more defensive backs.”

As the strongside, or SAM linebacker position became less linebacker and more defensive back, Wilson took to it immediately. He could not only show off his immense skills in coverage, but he also had the opportunity to occasionally go after the quarterback, adding another weapon to his already potent arsenal.

He played three all-star seasons in Toronto between 1990 and 1992 but was then dealt back to Edmonton as a part of an incredible 16-player trade that included players like Tracy Ham, D.K. Smith, Ricky Foggie and Ed Berry. He spent two seasons in Edmonton before heading back to Toronto for ’95 and ’96.

Wilson will long be remembered for the final time he wore the Double Blue. There’s a spectacular picture that captures the 1996 Grey Cup win perfectly. It’s a photo of the Grey Cup presentation after the Argos beat Wilson’s former team at a snowy Ivor Wynne Stadium in Hamilton. The five captains; Wilson, Doug Flutie, “Pinball” Clemons, Pierre Vercheval and Paul Masotti are all beaming in the photo, wearing their “Grey Cup Champions” hats. Wilson is on the far left, his left hand tightly grasping the trophy’s handle, held high above the quintet’s heads. 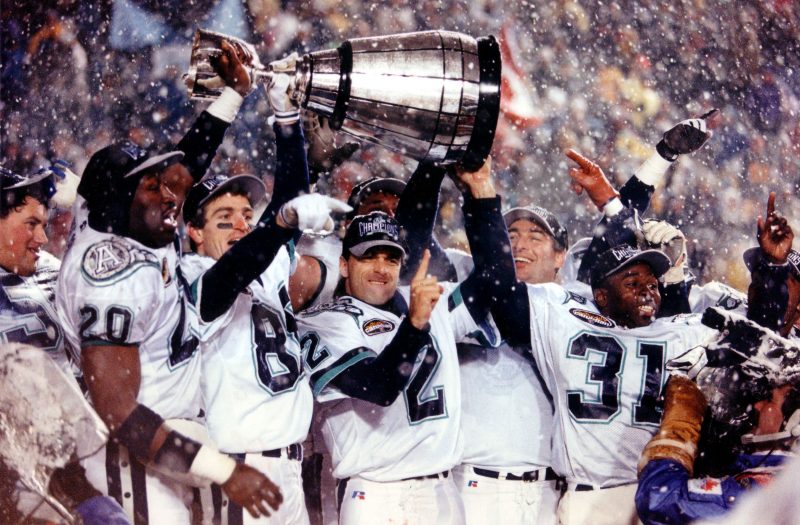 When asked by Argonauts.ca if he recalled that moment, and whether he was just enjoying the victory, or reflecting on what could have been the then 35-year old’s last game – though he did play two more seasons out west.

“I was thinking both,” Wilson confessed. “I was thinking about the moment and thinking this could be coming to an end. But as a lot of athletes do, we always think we can continue to play. I wanted another championship. I knew with the team we had, with Flutie and Pinball and all the other guys on our defence, I knew we could probably do it again next year.”

They did, he just wouldn’t be with them after signing a deal with the B.C. Lions, where he would play one season before finishing his career with a third stint in Edmonton.

Wilson is a larger-than-life character. He doesn’t enter a conversation he explodes into it, the same way he constantly let his presence be known on the field. His Hall-of-Fame speech could be one for the ages.

Steinauer’s early history with the Argos was unique. His playing rights were acquired from Hamilton in a controversial 2000 trade that sent Mike O’Shea down the QEW. Already a two-time all-star with the Ticats, Steinauer never played in Toronto at first. He was with Miami and had injured his knee. When he was eventually released by the Dolphins, he headed north but was let go by Toronto because of the injury. He re-signed in Hamilton, recovered from the injury and played in a playoff game before signing a free-agent deal with the Argos the next season.

To say the least, it worked out for both the player and the team. 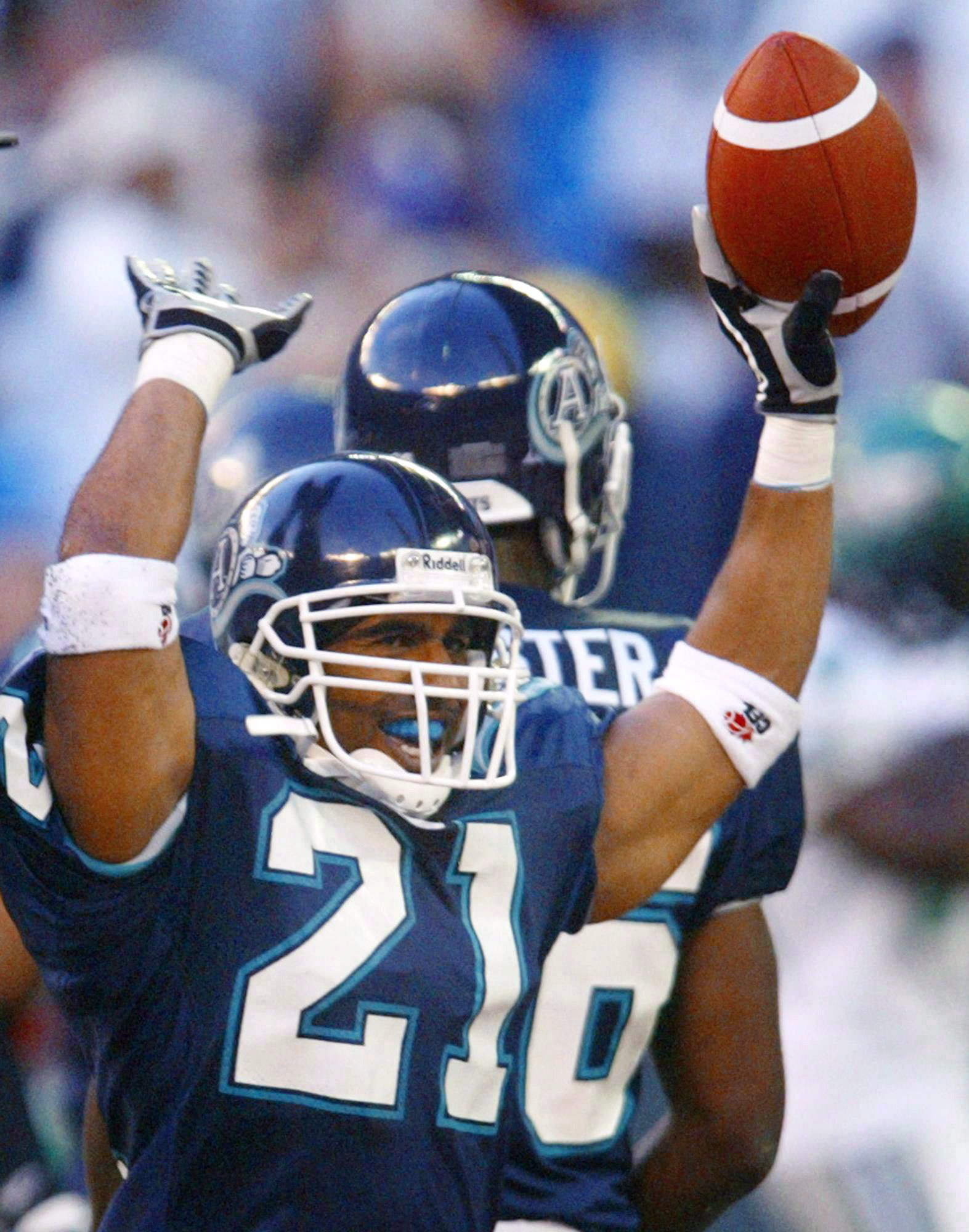 Like Wilson, Steinauer was a versatile DB who excelled wherever he lined up. He’d be named an Eastern All-Star seven times, a CFL All-Star five times, and the Argos Most Outstanding Defensive Player in 2002. He’d become a key component of a talented, incredibly football savvy defence that produced a handful of future CFL coaches; Steinauer, O’Shea, Kevin Eiben, Jordan Younger and Chuck Winters.

The group experienced its most success under Defensive Coordinator Rich Stubler, culminating with a Grey Cup in in 2004.

“He did make it fun,” said Steinauer of Stubler on a video conference call. “It wasn’t all about football. It wasn’t about who ran the fastest or jumped the highest. It was truly what people talk about, can you come together and be a team?”

The Argos did, and in their championship season surrendered just six points in a semi-final win over Hamilton, then 18 in an East Final win at Montreal.

“He believed what he believed in, which was a “match” defensive coverage,” said Steinauer. “Did it have its flaws and weaknesses? Absolutely, but he had a vision and the players he wanted in it and he didn’t waver from that.”

“We weren’t the most talented, but we were hard to beat,” he continued. “He empowered his players and that’s something that’s stuck with me. There’s no doubt who was the leader, the Minister of Defence was Rich Stubler. The brains was Rich Stubler.”

The defence had a sensational game in the 27-19 Grey Cup win over B.C. It gave up a touchdown on the opening drive, then shut down the Lions after that until allowing one more late TD. But it wasn’t something that happened on the field that provided Steinauer with his most vivid personal memory of that night in Ottawa. 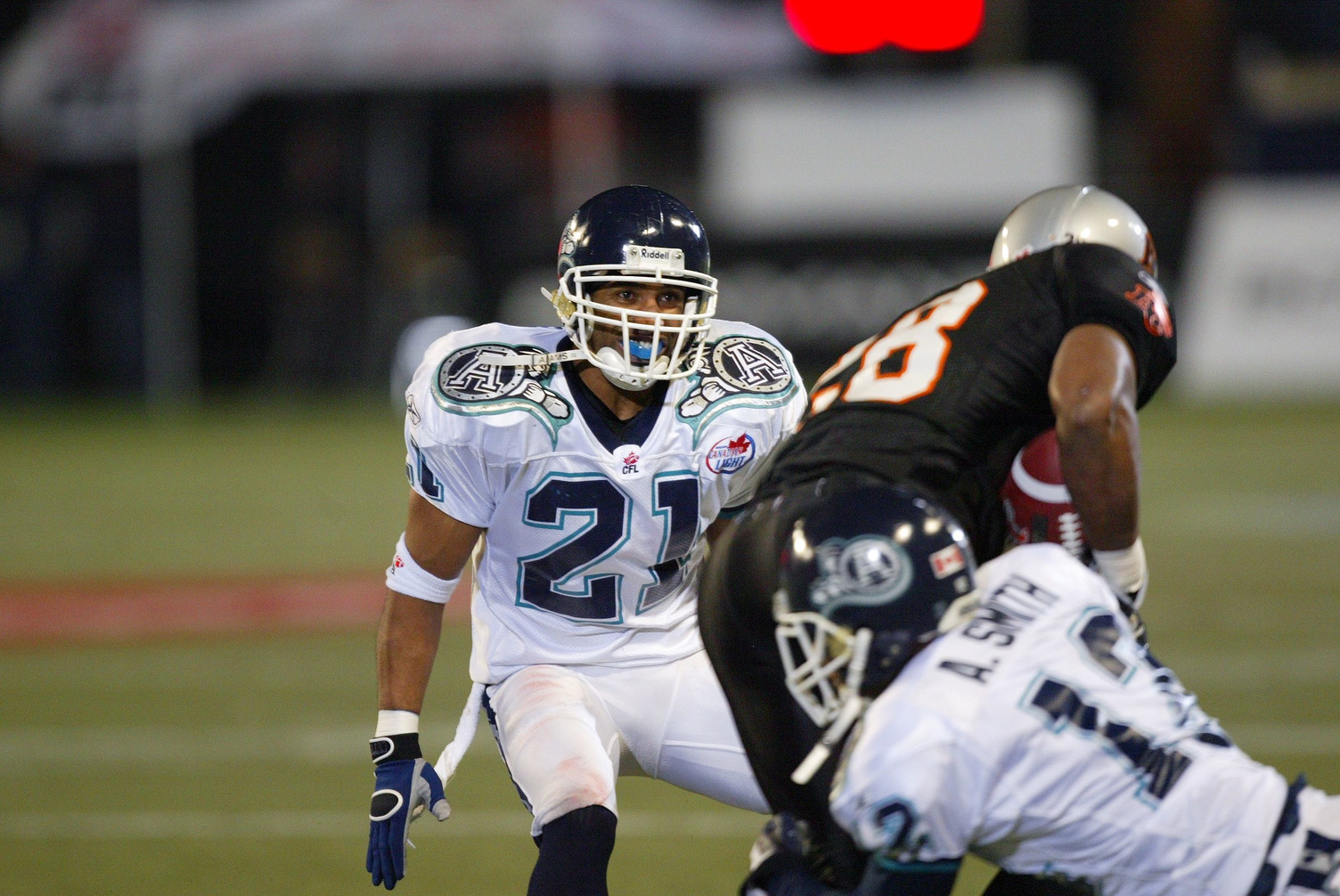 “We won, we were in the locker room and everyone was just kind of sitting there,” he recalled. “I remember just sitting in my locker and I saw people, everybody had their personal pint, and everybody is partying, the locker room is shaking because they want to let family in, and I was just sitting there taking it in. I remember looking to my right and I saw Michael Fletcher kind of doing the same thing. He was a little more active than me. I said ‘Fletch, what are you doing man, I thought I would be the only one just chilling.’ He said ‘Hey O., I already knew we were going to win.’ That’s the mentality that we had. That’s how that football team was built. Make no mistake about it, we all know that Mike “Pinball” Clemons is the guy that ran that football team and built that culture.”

Steinuaer wasn’t done with the Argos, returning as the team’s defensive backs coach, winning another Grey Cup in 2012. He’d eventually become the head coach in Hamilton, leading his team to a berth in the 2019 Grey Cup final against Winnipeg, coached by O’Shea, a member of the 2017 Hall-of-Fame class.

It’s been almost 20 years since an Argo defensive back entered the Hall – Paul Bennett was in the Class of 2002 – so seeing Steinauer and Wilson going in together is not only appropriate but makes up for a lot of lost time.