March was Women’s History Month, a time to celebrate which issues have shown an advancement in equity and a chance to identify potential areas of growth.

It’s the same for women’s football.

During the month multiple events were held to speak about the direction the sport needs to take to reach the next level. Among them, the Argos “Women In Football” panel hosted by fullback Declan Cross, which presented an array of women involved in different areas of the sport to talk about their experiences. Among those asked to speak was Argos Community and Player Relations Coordinator Julia Di Nardo.

If there’s an agreement in any one area, it’s that the grass roots development of the sport needs to continue to grow. There’s certainly room for improvement locally as the Toronto Flag Football Association has just under 100 female athletes competing, while there are other leagues in the region that also offer women a chance to play. The province of Ontario however lags far behind most regions in terms of providing options for women to play tackle football.

That means for now, flag is the best option for athletes, which is great news for the TFFL as it tries to boost its membership on both the women’s and men’s sides.

Gina Mulic has coached in the TFFL for three seasons. Playing and coaching the sport came relatively recently. She was a CFL fan while growing up in Edmonton, though she didn’t start playing flag until she was nineteen. Some basketball teammates of hers asked if she would play on their football team. She said yes and found so many of the skills, like footwork and playing defence, were transferable, making the transition a relatively easy one.

When her kids started playing, coaching them seemed like the right thing to do since she’s also coached basketball and volleyball. She’s working with TFFL girls between grades five and seven.

“They’re super enthusiastic,” Mulic told Argonauts.ca in a phone interview. “The younger kids just have fun getting together. They’re keen to learn the new skills and you can see they’re excited when they figure out how to throw a ball or catch a ball, but they’re also excited about the social aspect of getting together on the field on a regular basis.”

The hope is that these young girls embrace the sport and become even bigger fans. That’s what happened in Mulic’s case.

“When I was a kid growing up in Edmonton there was a pretty big football culture,” she said. “We always went to the games but didn’t always understand what was happening.  After I started playing, I definitely liked the game a lot more once I understood the rules. You get a lot more excited about what’s happening when you’re watching.”

Now this football family rides their bikes down to BMO to watch games together. 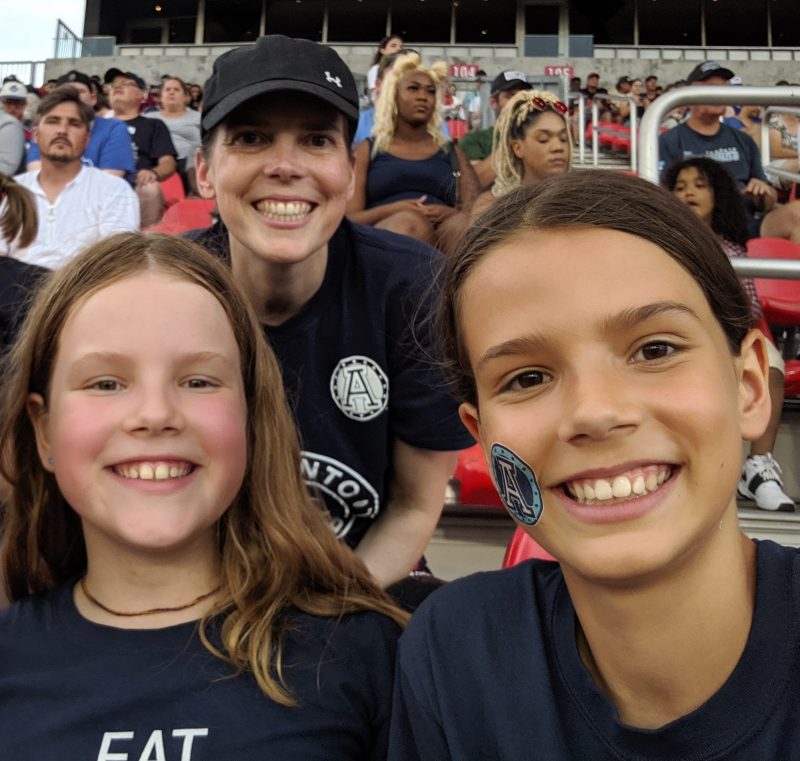 “I think one thing to get to get more people involved is to focus on the athleticism; the running, and cutting, and catching,” Mulic explained. “If it feels safe, I think people are keen to play. Women’s sports are having a real moment; the TSN all-woman Raptor broadcast, the NCAA March Madness women’s tournament is getting a lot of coverage. I think people used to think women’s sports really sucked but had never really watched it. Now that they’ve watched it, they can see how competitive it is and how skilled the players are and are more excited about women’s sports than ever before.”

And people should be. That exposure has helped create a buzz, as has an opportunity for women who want to play at a higher level after high school. The Ontario Women’s Intercollegiate Football Association (OWIFA) is still experiencing growing pains but is moving in the right direction.

At the OUA level, Western and Queen’s have a long, storied football rivalry. In recent years it is perhaps best defined by a 2009 playoff battle between quarterbacks Michael Faulds and Danny Branagan. Now, an off-field collaboration between QBs from those schools is looking to take the sport to another level.

Those QBs are Olivia Ghosh-Swaby and Emily Coulas, and they want to see women’s football move from the recreational level to become a full-fledged OUA varsity sport.

Mississauga’s Ghosh-Swaby is a PhD student in neuroscience at Western. She moved from volleyball to football in her second year in London. Now in her fifth year playing for the Mustangs, she’s played football since grade seven and is now fully committed to the sport, also playing all-ages touch football in Toronto.

Emily Coulas is from Renfrew and is in her fourth year at Queen’s. Sadly, there were no football opportunities for girls growing up in the Ottawa Valley, and she didn’t discover the sport until last year. She’s making up for lost time, playing not only for the Gaels, but in a summer league as well. It’s inspired her competitive juices again and she’s now passionate about growing the game. She’ll take over as the Queen’s football club president next year.

At the university level there’s continued growth, with the OWIFA version of the sport basically flag football with blocking, or as Ghosy-Swaby describes it “Tackle football minus the tackling, tackling is replaced by flagging.” It’s not yet gained status as an official intercollegiate sport, still relegated to the “club” level, and that has a direct impact on funding.

“I’ve been in a ton of conversations,” Ghosh-Swaby told Argonauts.ca. “Right now, I think we’re 30 percent there, but not close. The only time they’ll consider us a sport is if six institutions and their athletic directors envision that sport under their varsity sport model. If we don’t have those yesses from the athletic directors, then it’s not going to happen any time soon.”

One would think that with the rich football history of the Mustangs on the men’s side, the school would be fully behind the women’s game, but Ghosh-Swaby says that’s not the case and had to give it up to the rival school.

“You would think I would have the backing behind me on the Western end, but it doesn’t exist,” admitted Ghosh-Swaby, who also serves as the OWIFA League Commissioner. “Queen’s is probably leading the way (among OUA schools), Western is the furthest behind.”

Queen’s on the other hand has been extremely supportive of women’s football.

“We just recently became a rec club this year,” said Coulas, who is also OWIFA’s Vice President of External Affairs. “Since then, we’ve hired Kwame Osei, who is a coach for the men’s football team (and perhaps best known as a finalist on Amazing Race Canada). We just hired some other community coaches, including another member of the men’s football staff who is now coaching our team as well. I don’t know how we got this done so quickly, but hopefully it keeps progressing.”

Ghosh-Swaby, who was also a member of the Argos Women In Football panel, says it’s not just Queen’s leading the way in Ontario.

“The ones that came out of the gates a bit stronger were Waterloo and Laurier,” she said. “The ones that are furthest behind are Western and Guelph. From the Western perspective we’ve applied for club status for six years and we’ve been rejected every time. I submitted four of those applications and there were two prior to me.”

The reason? The school has said it’s not adding any new varsity teams or any new clubs. Women’s football has been told the school is revisiting its sports model to see how new clubs can best fit in.

While there are both encouraging and depressing results with OWIFA, the tackle version of the sport in Ontario lags far behind other regions of the country.

“There aren’t really any tackle programs for women,” explained Ghosh-Swaby. “In Western Canada there’s a tackle program for women there, but they also play with their men’s programs in high school. Here we don’t really have anything. It just hasn’t been introduced to us.”

So how do you expand the number of women actively participating in the sport, whether it be the flag, touch or tackle variety?

“What I would like to see is a lot more grassroots introduction to football,” said Coulas, who is studying to become a teacher. “Flag football at a younger age for women and young girls, because I think having that experience coming into university would have been something I would have cherished. It would elevate the sport at our level.”

Ghosh-Swaby is concerned that Canadian universities are losing women to the NCAA because scholarships and other opportunities are being offered, which saddens her because she’s so supportive of the sport.

“The game invites so many women, especially the version we play, because you can be any shape, any size. There’s also a lot of strategy so you have to have that intelligence as well as the physicality behind it.”

Mulic has the same mindset, just at a more relaxed level.

“The main thing is that you should just try it whether you’re an athlete or not,” said Mulic. “You need an understanding coach, or a low-pressure situation to get started. That’s one thing about TFFL specifically, it’s a recreational league and the focus is on fun first. I think that’s why they’ve had a lot of success attracting girls and young women to come play. You get on the field and play and learn really quickly.”

The more that get on the field, or just learn more about the game, the better.