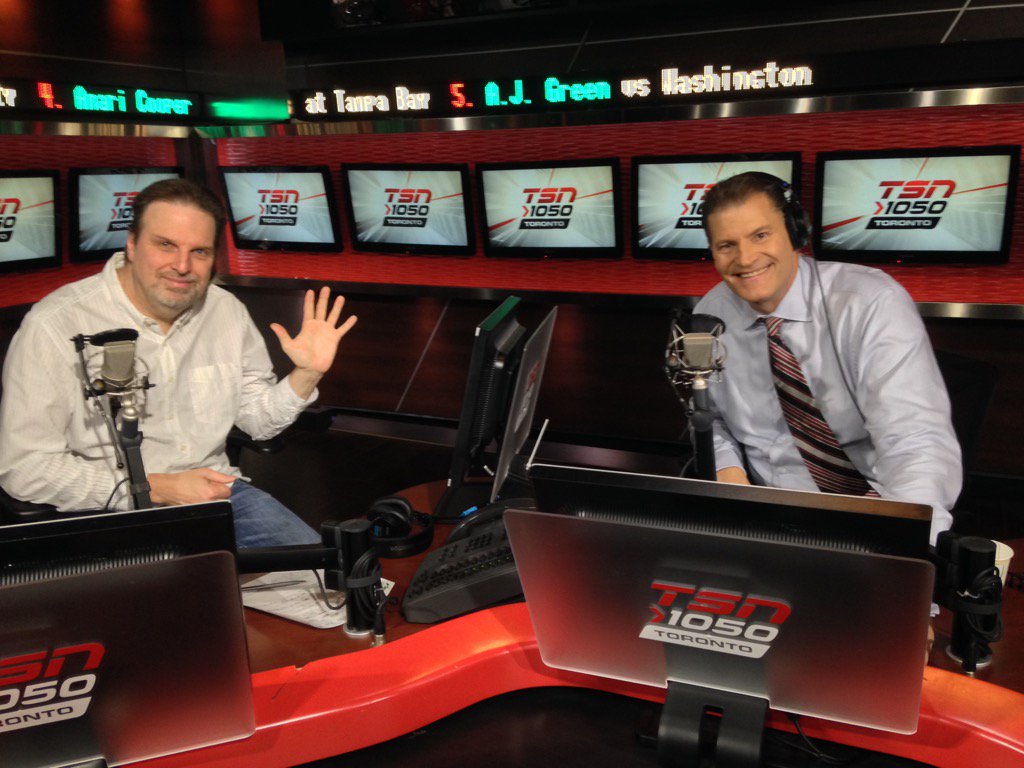 There’s an oft-quoted line in the movie “A League of Their Own” where Tom Hanks says, “There’s no crying in baseball.”

On this day there’s crying in football, and lots of it.

I confess that I’m writing this through a waterfall of tears. My throat is tight, I feel a chill. There’s a feeling of disbelief as I try to find the correct words to express my feelings after just being told that Chris Schultz has passed away.

It’s Thursday night as I write this. I received the devastating news from my wife at about 7:30. She got a call from someone she knew well, who knew someone well, that knew Chris well. Not exactly first-hand information, but knowing the people involved, I trusted the news was accurate. Chris’ good friend knew that Schultzy and I were tight and wanted me to hear the news from family. It was a call I wish I didn’t have to take.

Within a couple of minutes, the phone rang. It was from a concerned former TSN colleague who heard the same thing I did. It was the first of a series of messages and calls from former teammates, colleagues and friends, all concerned with the wellbeing of the big guy, hoping the news that was starting to spread wasn’t true. The toughest conversation was confirming the news to one of his former teammates, which led both of us to break down in tears and end the call early.

Schultzy and I first connected in September 1993 when I was hosting a show at the Fan 590 and he was working his way through a season-ending knee injury. He and Brian Warren came to the studio to co-host with me and just talk some football. Warren was a defensive lineman with a silky-smooth voice that made Barry White sound like a Smurf. He’d go on to become one of the analysts when AM 640 had the Argo rights.

I got stuck with Chris. It was the best thing that could have happened to me.

If there was someone not cut out to be on radio and television circa 1993, it was the Big Man. In the early days of his broadcasting career he found it difficult, no, he found it impossible to criticize players. He knew what it was like to be on the other side of a harsh, sometimes inaccurate evaluation, and hated it. That was something he never felt comfortable with, even if he was pointing out something obvious. 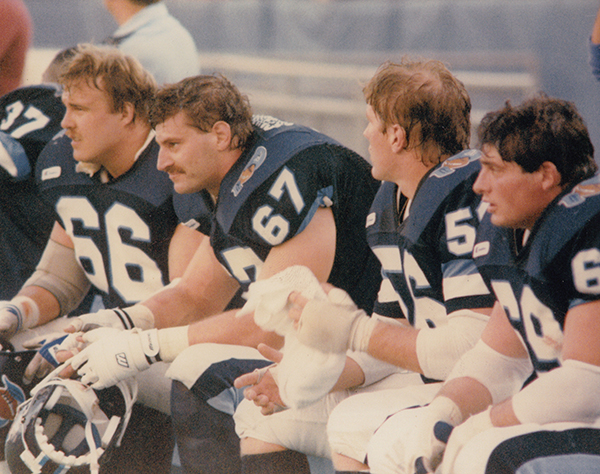 The Schultz of that era found it even tougher to laugh on the air. During one of the first “Football Sunday” shows we’d work together – a show that would run for roughly a decade and a half – I thought I needed to get him to lighten up. During a commercial break I walked out of the studio and into the control room. I thought it would be hysterical if I stayed out of the studio as the commercial ended and he’d be alone on the air to fend for himself.

The technical director, if memory holds true, was future Blue Jays reporter Barry Davis. He told me the commercials were ending and the next segment with Chris and me was about to begin. I told him I knew. The intro music started, and I stared through the studio glass at my rookie partner, my arms crossed and a big smile on my face. When Chris figured out what was going on, he got a look on his face I imagine opposing defensive linemen experienced for years, an intense stare with a completely expressionless face. He pointed at me, then without taking his eyes off me, he pointed to the empty chair. I got the message, but so did he. Radio at its best is supposed to be fun. Chris grew into the role spectacularly well.

As a person, he was complex (I admit I had to stop writing for a moment when I realized I had typed the word “was” and speaking of my friend in the past tense). We got along incredibly well, but rarely socialized, even when I was living in Burlington, roughly a kilometre and a half from his place. He was very regimented in his day to day life; he worked out every morning at the same time, grabbed a coffee at the same place, and most importantly, he liked to separate work life from real life.

I never asked him why. When we did go out it was invariably a ton of fun, and maybe deep-down Chris didn’t want to have the relationship change, for fear of it going bad. He like to compartmentalize, and my guess was that I was placed in the “work” category.

To say I’m happy to have had the opportunity to work with him would be a grotesque understatement. Schultzy used to test me often, particularly in the early days of our partnership. I’d be sitting doing some prep work and hear him randomly ask an Xs and Os question to test me. Sometimes I’d pass, other times I wouldn’t, but I’d learn, and was always anxious to tap into my 6’8” resource.

Between Chris and my first Argo radio broadcast partner, Pete Martin, I developed a better-than-working knowledge of the sport. I felt I had to learn more to keep up with those two encyclopedias. They spoke, I listened, and I owe them both as much as anyone for enhancing my passion for the sport. They were both excellent teachers who shared an enormous respect for the game. Not surprisingly, Pete was one of the first people to call me to express his condolences. 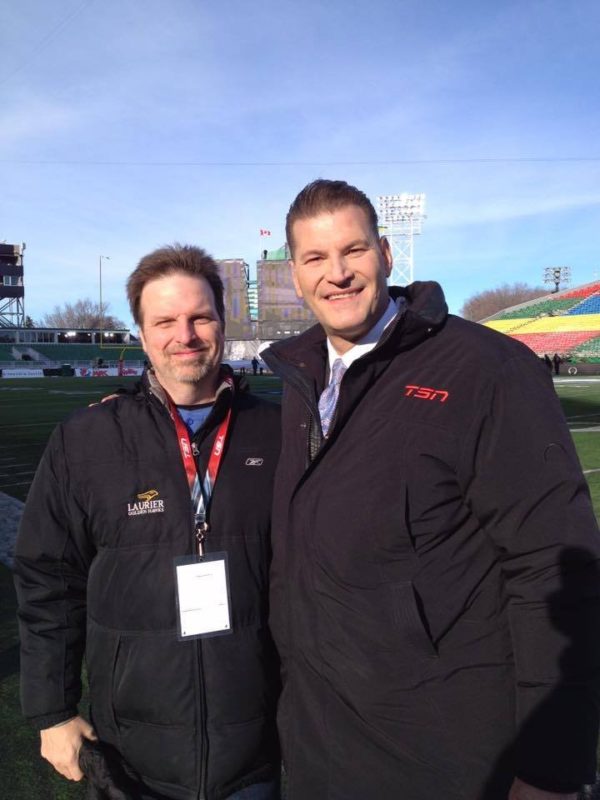 In 2018 I took a job in the communications department with the Argos. Chris’ 22-year run with TSN concluded and he was wondering if there was a way that he could become a part of the radio crew, just like old times. There was one issue, Jeff Johnson was in the colour commentator role and was exceptionally good at it. He wasn’t going anywhere.

Chris said he didn’t know Jeff but had an enormous amount of respect for him and didn’t want to step on any toes, he was just asking. About a month later Jeff let me know that he and his family were moving to Halifax, creating an opening in the broadcast booth. It provided the opportunity for the best-known Hogan/Schultz duo outside of the old sitcom Hogan’s Heroes to be reunited.

His biggest joy of the broadcast was the least expected. For the most part, he didn’t like looking back, the thought of a reunion made him cringe, but during each radio broadcast a member of the Argos Alumni Association would join us and Chris absolutely loved catching up with old teammates, or meeting someone for the first time. It was spectacular to see his face light up when an old friend walked into the booth.

I can’t tell you what that chance to work together again meant to both of us. Chris and I talked often, but never saw each other away from BMO Field. We last spoke seven days before he passed away. He was asking about some of the recent Argos player moves, talked about some common friends, how good he had been feeling of late, and he also was talking about a project he was about to start, doing some sort of podcast with a friend.

I wish more than anything that I could.

Instead I’ll continue to talk glowingly about a man whose friendship I treasured, who’s opinion I greatly respected, and who I loved working with as much, if not more than anyone I’ve had the pleasure to share a microphone with.

I miss you already Big Man.