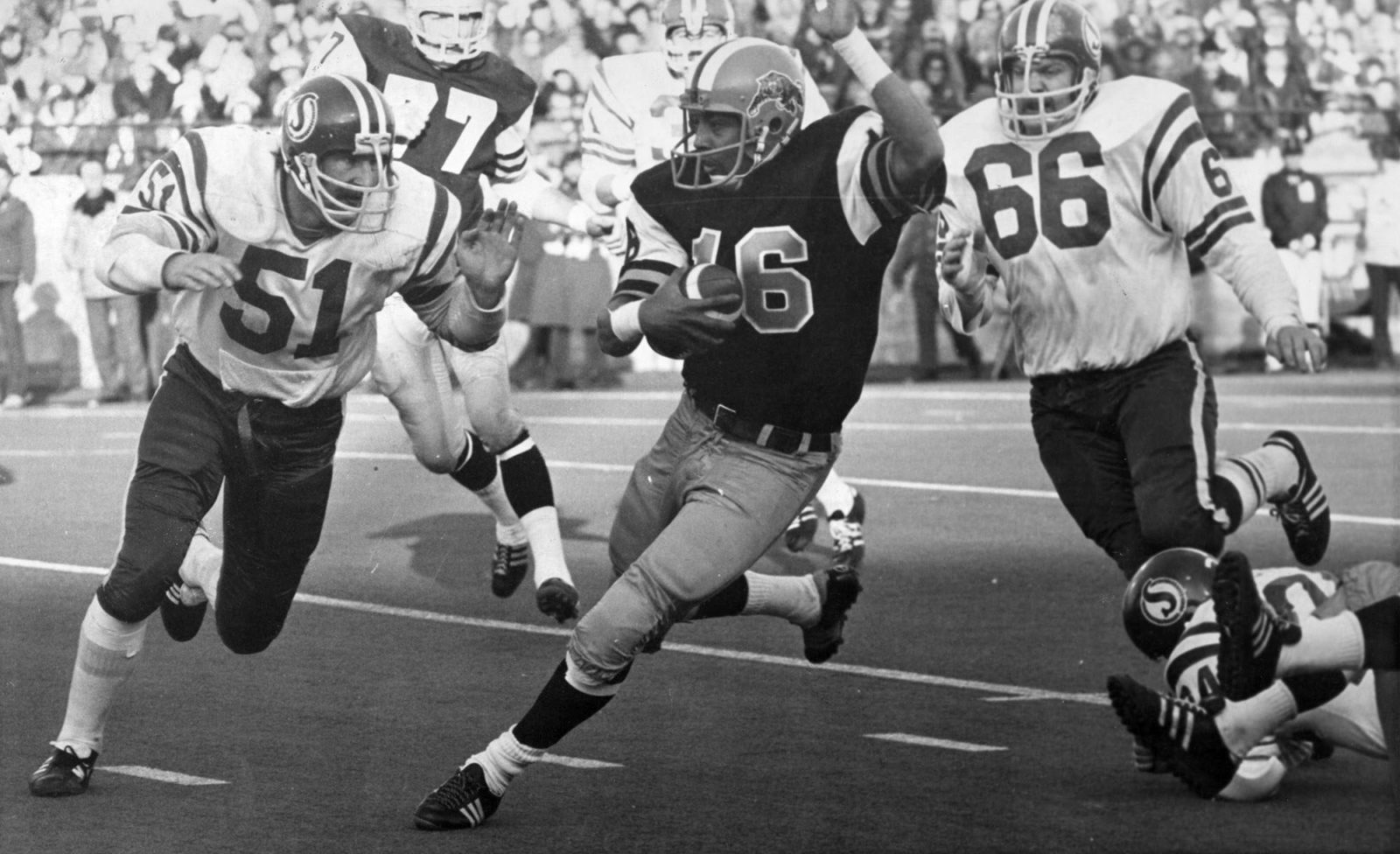 Hamilton Tiger-Cats quarterback Chuck Ealey (16) dances down the field with Steve Svitak (51) and Tim Roth (66) of saskatchewan Roughriders in pursuit during the 1972 Grey Cup game in Hamilton, Ont., on Dec. 3, 1972. (CP PHOTO/stf)

The drive from Toledo, Ohio to the Canadian border isn’t a lengthy one, taking roughly an hour. When Chuck Ealey made that trek in 1972, he had no idea that he’d leave an indelible imprint on the history of Canadian football, despite only playing in the CFL for seven seasons between 1972 and 1978, the final three-and-a-half of which were spent with the Toronto Argonauts.

Ealey is a native of Portsmouth, Ohio, in the southern part of the state, nestled along the Ohio River, which separates it from Kentucky. It was there that he led Notre Dame High School to an 18-0 record as a quarterback, winning the 1967 state championship. He’d then head upstate to play at the University of Toledo, where he compiled a 35-0 record, winning three Bowl games, being named the MVP in each one. He’s astonishingly not a member of the College Football Hall of Fame, but that’s another story altogether.

His record in high-school and college was an astonishing 53-0, yet that, combined with his obvious physical talent, still couldn’t get him a look in the NFL as a quarterback. The reason? The colour of his skin.

This year marks the 50th anniversary of his graduation from Toledo, so as Black History Month winds down, Argonauts.ca thought Ealey was the perfect person to talk to about what has changed in that half century.

The discussion opened with a reflection of his initial venture into Canada, and how there was a discernable difference in race relations between the two neighbouring countries.

“That’s the way you were treated,” said Ealey in an interview from his home in Brampton. “You were kind of a second-class citizen; your politics, your economic system, the way all those systems that governed you. Growing up you’re living it and don’t realize it until you get out of it and look back at some of those things that happened before you go someplace that’s different, like when I came to Canada.”

His first of three CFL stops was in Hamilton. He was given the opportunity to start in just the third game of his pro career and the Ticats did what Ealey did best, they won. They went 11-3 in the regular season, including winning their final ten games before the playoffs. After beating Ottawa in a two game total points series in the East Final, they capped it off by winning the Grey Cup over Saskatchewan at Ivor Wynne Stadium. With that, Ealey became the first Black quarterback to win the Grey Cup. 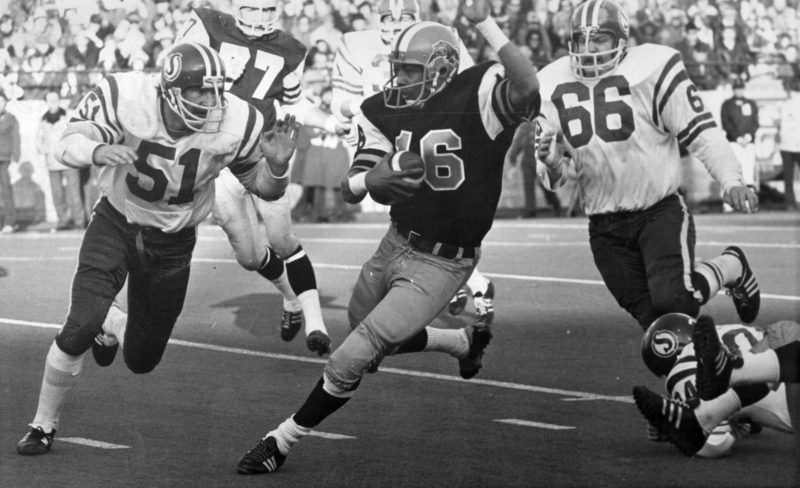 It happened because Ealey was given the opportunity to do something that he wasn’t afforded south of the border.

“The mere fact that when I came to play football there was no issue about whether I played quarterback. There was no question when I was there (in the United States looking for a spot in the NFL) after graduating from Toledo there was an issue that I had to play defensive back or wide receiver, because we don’t have quarterbacks that are black. While they didn’t say it that directly, that’s what you felt.”

A quick reminder here, this was 1972, not 1872. It was just a half-century ago that these overtly racist practices were taking place. Ealey’s success in the CFL would create opportunities for other Black quarterbacks to follow him north to continue playing a sport they loved at the position which they excelled.

“I never thought of myself as a trailblazer,” said Ealey. “I think Canada did that on its own. I think my performance opened the doors to say ‘aha!’ because Bernie Custis (who became the first black professional quarterback in the modern era in 1951) was here before me. Because I got a chance to play and was successful they kind of went ‘okay,’ and for the guys on the other side of the border, Condredge (Holloway), Jimmy Jones and Warren Moon who had all the talent to play in the NFL, but not get a fair chance, to say ‘look, let’s do this,’ and Canada was saying ‘yes, come on!’”

One would think there would have been pressure on Ealey to succeed. In retrospect, he was leading the way for several Black quarterbacks who would head to Canada in the next decade. That wasn’t on his mind at the time.

“I didn’t even think about that,” confessed Ealey. “It wasn’t even on the radar to think about it. I was just very thankful to get a position. When I got my degree, my mother had an eighth-grade education and grew up as a single mom in the projects, all I wanted to do was get my education. I had control of my education which I considered to be the key to the rest of my life. The sport of football became secondary, so I wasn’t an African American kid coming out of the States thinking that I want to play professional football and I have to play in the NFL. It gave me great power when I had my degree, before I left to go to Hamilton, I was going into business and I wasn’t even thinking about it. I was just not going to go to the NFL and play another position.” 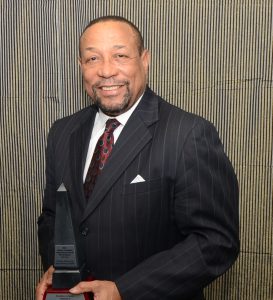 Ticats G.M. Ralph Sazio offered Ealey the chance to play quarterback at the pro level and the rest was history, not to mention a blessing to Canadian football fans. It led to the next wave of Black quarterbacks heading north, one of whom particularly leaned on the door that Custis and then Ealey had opened.

“After Condredge (who arrived in Canada in 1975), it was probably another four, five or six years before they started opening up. I think the era where Warren Moon came in (joining Edmonton in 1978), a very short period of time after I was here, that opened it up even more so. He was a prototypical NFL guy with his size and his arm. The rule now with guys my size (6’1”, 195 in his playing days) and even smaller playing, came along later. Now they just pick the athletes they want to have, period, regardless of the colour of their skin.”

Seeing players like Gilbert Renfroe, Rickey Foggie, Damon Allen, and Michael Bishop have success in Canada is at least in part because of the advances Custis, Ealey, Holloway and Moon made. How is the league doing now in terms of equity?

That mindset has gradually evolved from the position of quarterback to that of head coach. In fact, within an eight-day span in December 2018, three Black head coaches were hired in the CFL, yet the racial element of that story barely caused a ripple. That is the situation that Ealey has been looking for.

“You could see it as a time to celebrate, but why are we celebrating?” he asked. “It’s just the way life should be. Just close your eyes and you don’t see any colour and that’s where ultimately we want to be, where we don’t even give it a second thought that a person is Black.”