Sold: The birth of the McNall, Candy, and Gretzky Era 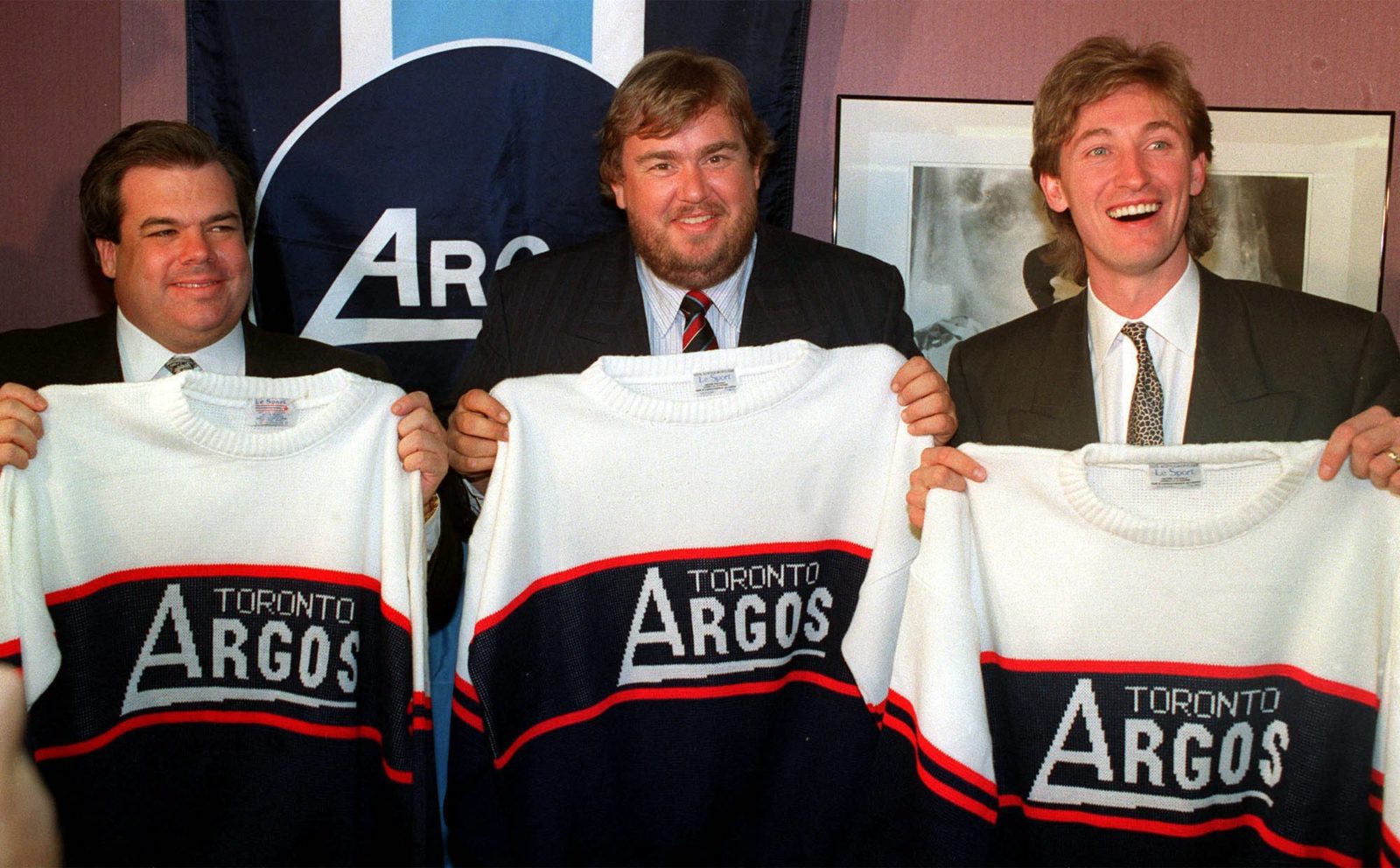 Sold: The birth of the McNall, Candy, and Gretzky Era

February 21st, 1991 was a day that rocked the North American sporting landscape. When a sports team is sold it’s normally big news in the local market, less so around the continent; but this one was different.

It was on that date that the sale of the Toronto Argonauts was announced, and it became international news because of the extraordinarily high profile of the new ownership group.

In that era the Toronto sporting situation was baseball heavy. The Blue Jays would be a playoff team that year, winning the American League East by seven games before losing the ALCS to the eventual World Series champion Minnesota Twins. The Maple Leafs finished in last place in the Norris Division in ’90-91, losing 23 more games than they won. The Raptors were still four years away from being formed, and TFC wouldn’t be around until 2007.

The Argos were an explosive team in 1990, averaging a whopping 38.2 points per game, but lost to the Winnipeg Blue Bombers in the East Final. Sophomore running back “Pinball” Clemons was unstoppable, setting a league record with 3,300 combined yards, winning new fans with his electric style of play. 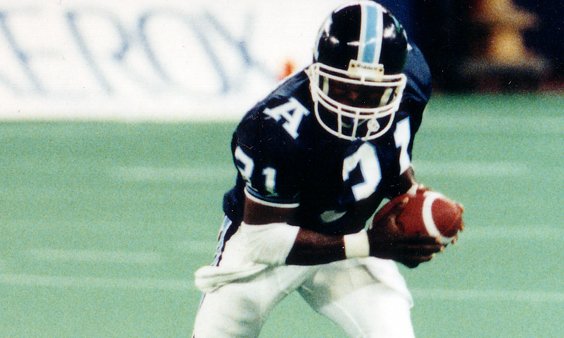 But something was missing in the team’s second season in the mammoth SkyDome. It wasn’t the crowd size, as the attendance ranged from 27,000-40,000 per game, there just wasn’t the same feel as going to a game at Exhibition Stadium.

Argo owner Harry Ornest wanted to sell the team and eventually found someone who was interested. He knew L.A. Kings owner Bruce McNall from the board at Hollywood Park racetrack. The 40-year old was always looking for an investment and a new adventure. Several discussions and five million dollars later the pair had a deal.

Wayne Gretzky, who played for McNall’s Kings, and actor John Candy, a regular at Kings games and a devout Argo fan, would complete the trio, each purchasing ten percent of the team.

Mike McCarthy was there to witness each step of the sale. The native of Central New York arrived in Hamilton in 1985 after spending time in the NFL and USFL. He would eventually work for Ottawa, B.C., Montreal and Toronto, winning five Grey Cup rings in the process.

He joined the Argos as their general manager in 1989, eventually adding the vice president of football operations duties to his portfolio. He knew early on that Ornest was looking to sell the Boatmen.

“He told me right away,” McCarthy told Argonauts.ca in a phone interview. “It was in September or October of 1990. I asked him who he had been talking to. He said ‘Do you remember when I brought you out to L.A., we went to Hollywood Park?’ I said yes, and that’s where I had met Bruce McNall.”

Nothing was imminent at that meeting but talks between Ornest and McNall had been continuing, and the Kings owner eventually made a trip to Toronto when his hockey team was in town to play the Leafs. Before the game the pair hosted a dinner gathering at an Italian restaurant near Maple Leaf Gardens.

“We had drinks; we had a nice dinner. Harry’s lawyer from Hollywood was there, Roy Mlakar (McNall’s right hand man with the Kings) was there. I knew this was serious because Harry didn’t B.S.”

Aside from McCarthy nobody in the organization had any clue what was going on at the top. Ornest wasn’t laying off people or streamlining expenses before the sale because McCarthy said there was really nothing to cut, it was already a bare bones operation.

McNall was highly recognizable in Canada because of his ownership of the hockey team and specifically for acquiring Gretzky in a 1988 trade with the Edmonton Oilers. The immense fame of the best hockey player in the world, and Candy, a major movie star coming off a huge hit in Uncle Buck in 1989, would propel the profile of the ownership group into an altogether different stratosphere.

“That was the second curtain to be raised,” explained McCarthy. “Harry said that he thought both guys were going to be involved. We met once or twice together. I met with Harry first and then we all met at a hotel in December 1990. Bruce was doing all the talking. John was just giggling about owning the Argos because he’s been an Argo fan his entire life, Wayne was reserved. They said we want to do something big. That’s where the talk of bringing in a star NFL player started.”

That player turned out to be Raghib “Rocket” Ismail, who would be signed in April ’91. 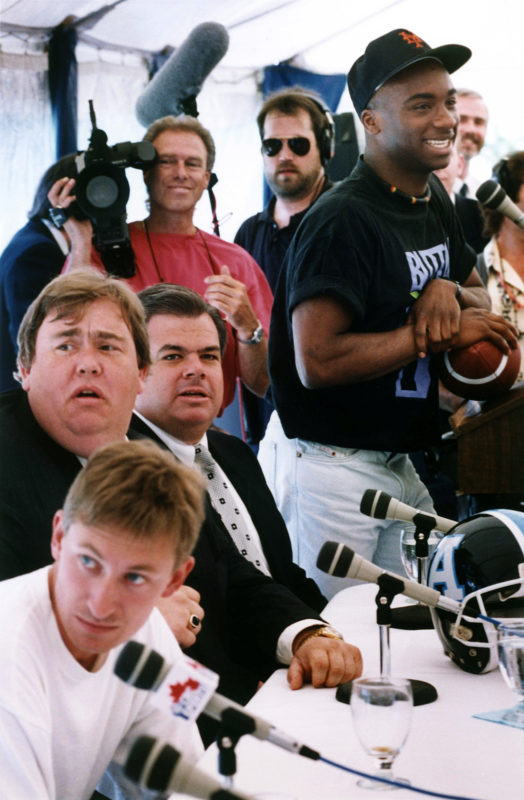 McCarthy didn’t need to kiss the Blarney Stone to receive the gift of gab, though he did pucker up for the Irish tourist attraction in 1992. His stories would occasionally go off in seemingly unrelated directions before always winding up at the intended destination, much like the sale of the football team.

“The transaction happened on the 14th, on Valentine’s Day,” said McCarthy, yet amazingly the news didn’t leak out until the day of the official announcement at a media conference, one week later.

The deal was announced at the SkyDome Hotel before an overflow gathering of media. Just like that, the Argos were the talk of not only the town, but the country.

One could imagine a significant change in attitude around the office when moving from Ornest to the glamourous new trio of owners. McCarthy said there was an instant influx of capital and an increase in resources.

“We went from eight people to 28 people in the front office immediately. Most of that was in marketing, sponsorship and sales. The wave in the office was intense, everything was detailed.”

With the high-profile ownership group intact, there was much anticipation about what was in store for Argo fans, but not even the most clairvoyant fan could have envisioned what was coming.