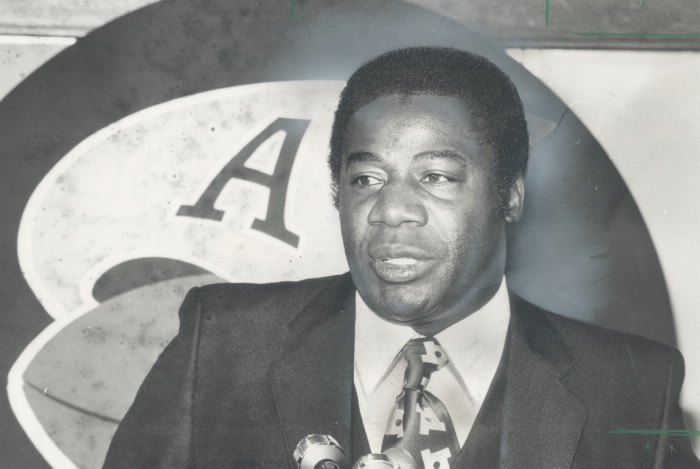 Willie Wood introduced as head coach of the Argonauts. Photo courtesy of the Toronto Public Library

When the Toronto Argonauts hired Corey Chamblin in December 2018, he was one of three Black head coaches hired in the CFL within an eight-day span. That would have been monumental news had it happened south of the border, but it was barely mentioned at all in Canada because hiring someone of colour in the CFL is hardly groundbreaking news.

Occasions like that don’t become relatively mundane in terms of newsworthiness without people having previously blazed the trail. The Toronto Argonauts have had some pretty special people break barriers and their accomplishments should be celebrated.

The first Black Argo player was Ken Whitlock, who joined the Argos in 1948 and who’s story was recently celebrated by Argonauts.ca. While he only played for four games, his brief, but significant contribution to the organization opened the door for players who would quickly follow his lead. 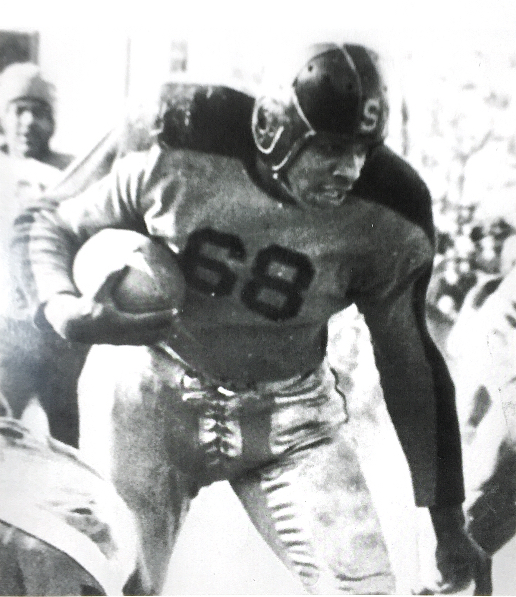 Ulysses Curtis was the first Black player to star for the Double Blue. The halfback joined the Argos out of Florida A&M in 1950. He was a member of both the 1950 (Mud Bowl) and 1952 Grey Cup champions.

While his playing career lasted just five seasons, his impact was significant. “Crazy Legs” remains prominently featured in the team’s record book; fourth with 3,712 career rushing yards, sixth with 26 rushing and 47 total touchdowns, and his 215-yard effort against Montreal in 1952 remains second on the list for rushing yards in a game. He was named an All-Time Argo by the Argonaut Alumni Association.

Curtis stayed in the GTA after his playing days were over. He was a long-time teacher, guidance counsellor and administrator in the North York Board of Education. He passed away in 2011. 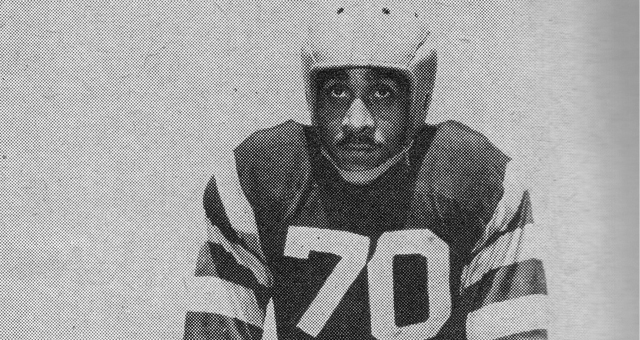 The CFL eventually became a haven for Black quarterbacks who were denied a chance to play in the NFL simply because of the colour of their skin. Before Condredge Holloway arrived in Toronto and led the Argos to back-to-back Grey Cup appearances, Chuck Ealey became the Argos first Black starting quarterback in 1975 after he was acquired from Winnipeg. Before his stop in Manitoba, Ealey made league history as he was the first Black quarterback to win a Grey Cup, doing that as a rookie with the Hamilton Tiger-Cats in 1972.

Ealey was the starter for all of the 1976 and 1977 seasons, before being injured in a game in ’78, which ended his playing career. The Argos made the playoffs in ’77, but it was an era of much disappointment, especially with a player of Ealey’s calibre at the helm. He remains in the record book with an 86-yard touchdown run against Hamilton in 1976. It’s the longest by a quarterback in team history and tied for the second longest by any player.

Willie Wood arrived in Toronto the year after Ealey’s retirement. He was hired as an assistant coach to Forrest Gregg, his long-time teammate with Vince Lombardi’s Green Bay Packers. Gregg left after the ‘79 season and was replaced by his old teammate, meaning Wood became first Black head coach in CFL history. While he pre-dated the first Black coach of the modern era in the NFL, Art Shell, by nine years, it must be noted that “Fritz” Pollard was the first Black head coach in the NFL (then APFA) with Akron in 1921 as a player/coach. 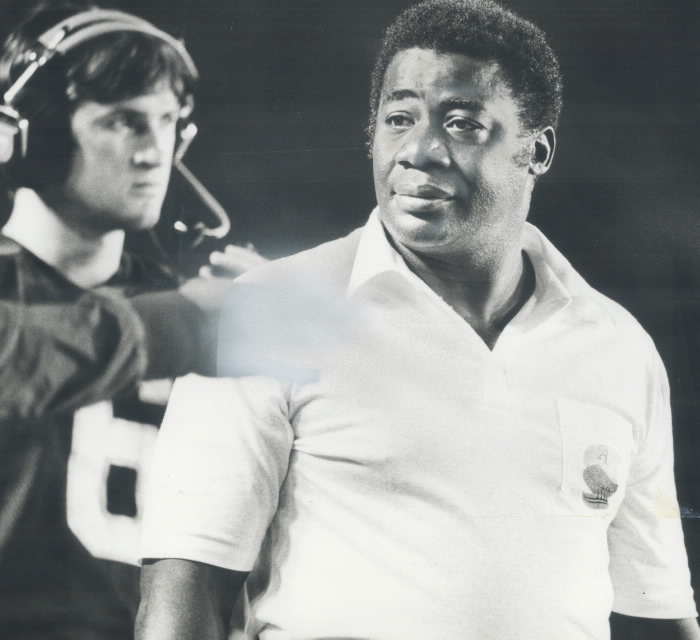 To be kind, Wood’s Argo career wasn’t successful, as the Argos went 6-10 in his first year, then lost the first 10 games of the 1981 season before he was relieved of his duties. Wood lived the final years of his life in his hometown of Washington D.C. before passing away in February 2020.

It wasn’t until 1990 that a Black player was inducted into the Canadian Football Hall of Fame after spending the better part of his career in Toronto. Marv Luster was acquired from Montreal in 1964 and immediately made his presence felt. A punishing hitter, Luster’s play in the defensive secondary made him an immediate favourite with fans, teammates and coaches. He still holds the Argos career record with 17 fumble recoveries.

Luster retired in 1972. An all-star for six of his seven seasons in Toronto, he would be enshrined in the CFHOF in 1990, the same year as his longtime teammate Jim Corrigall. He would be named an All-Time Argo by the Argo Alumni Association in 1998. Sadly, Luster passed away last year at the age of 82 after a bout with COVID-19.

And then there’s Michael Clemons. When “Pinball” arrived in Toronto in 1989 he quickly won the hearts of fans for the amount of talent he had packed in a 5’5 ½” body, but nobody could have predicted the impact he would have on the organization, the city and the country. His immense talent was dwarfed by his larger-than-life personality, while underappreciated for the most part is how successful he was as a coach.

Clemons took over the Argos head coaching duties midway through the 2000 season when John Huard was relieved of the job. The Dunedin, Florida native made the unheard-of transition from player to head coach. 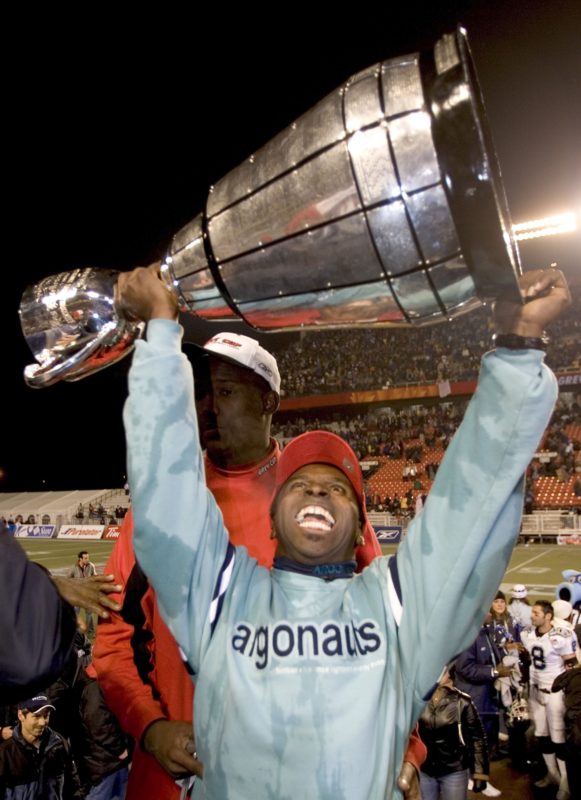 His on-field exploits are well documented, including his CFL record for most combined yards in a career, an astonishing 25,385 yards. What is often overlooked is Clemons’ coaching record. With 68 wins, he trails only Bob O’Billovich on the Argos all-time list. As a player he is an All-Time Argo, a member of the Canadian Football Hall of Fame, and is one of just four Argos to have his jersey number retired.

While none of these five men were a part of the organization at the same time, they are teammates in a different sense as people who opened the door for others to walk through. Their contributions to the Argonauts are fondly remembered and greatly respected.