TORONTO – The Toronto Argonauts Football Club announced on Friday the team’s schedule for the 2021 season.

For the first time in 595 days the Toronto Argonauts will be playing in a regular season game when they open their 2021 schedule at the friendly confines of BMO Field Saturday, June 19th at 5:00 p.m. vs. the rival Hamilton Tiger-Cats. This marks the fifth time in the last seven seasons the Argos have opened their schedule at home against their QEW enemies (2-2 in the previous four). For the second season in a row, Toronto will open with a Week 1 bye.

One of the most anticipated dates on the Argos schedule every year just got three times better! The Double Blue will be hosting three games during the Canadian National Exhibition when Ottawa comes to town Saturday, August 21st followed by Saskatchewan seven days later and a rare Wednesday tilt against the Ti-Cats on September 1st, a tune up for the Labour Day Classic. Free admission to the CNE included with the purchase of a game ticket. 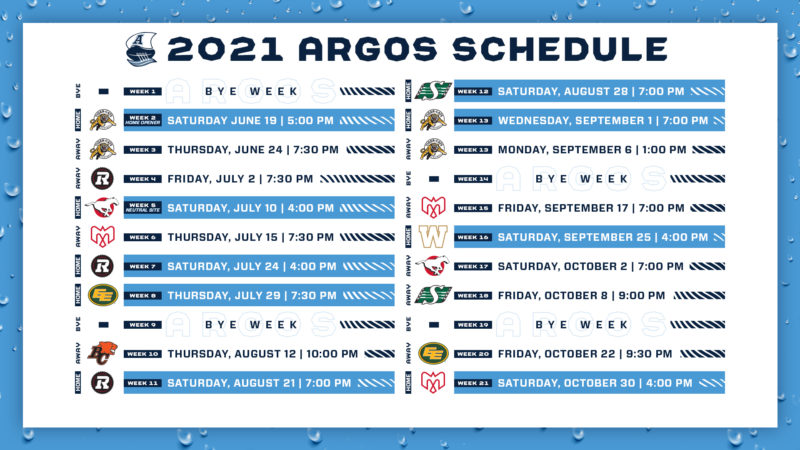 Other highlights from the 2021 home schedule:

Season Ticket Memberships for the 2021 Argonauts season are now available. For a limited time only Members receive a 10% Bonus Credit for Food, Beverage & Special Merchandise at BMO Field. Buy now and take advantage of Early Bird Savings plus a 1% Down Interest Free Payment Plan.