Hogan: Argos Receivers Speak from the Heart in Touchdown Program 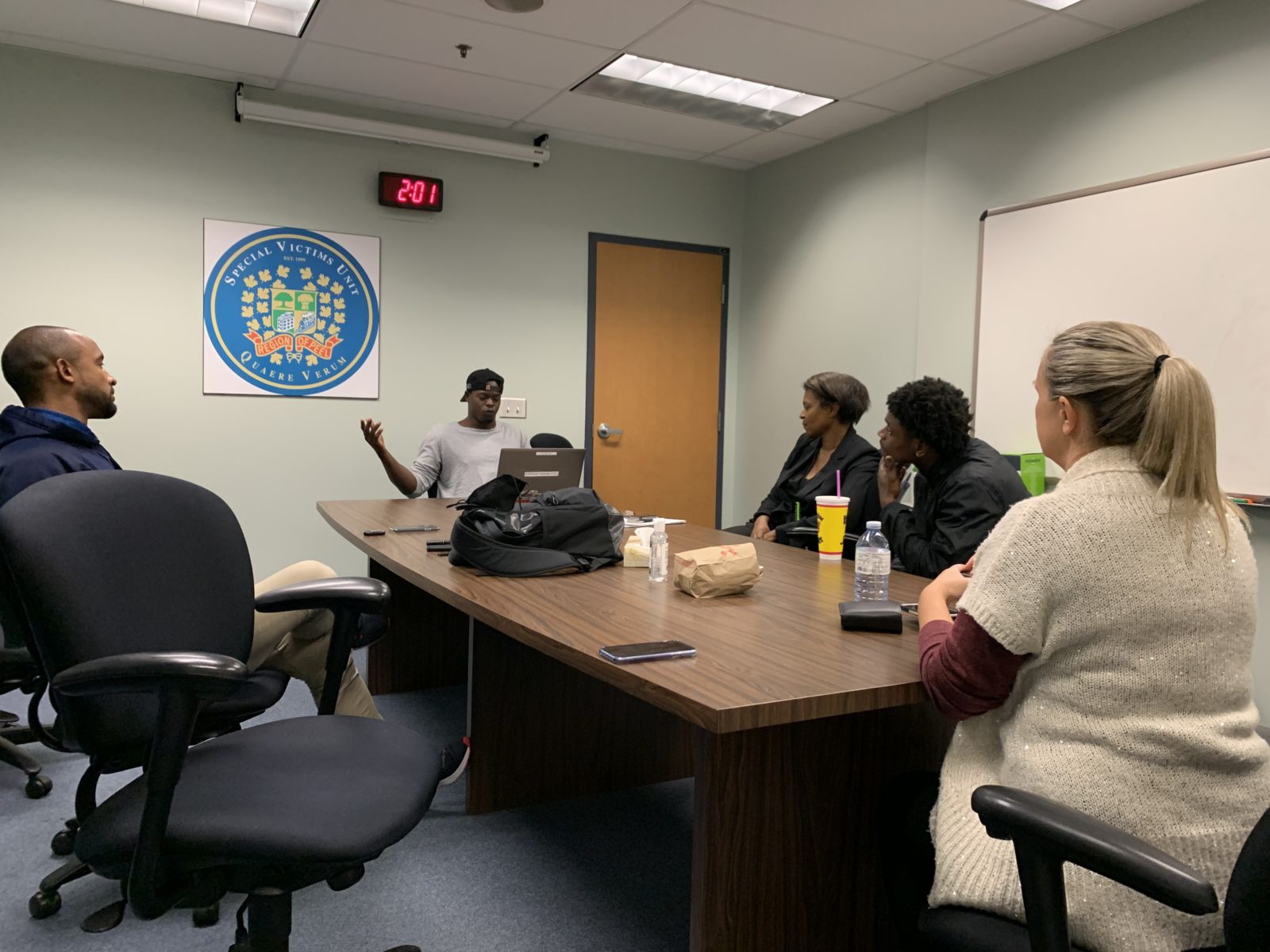 Hogan: Argos Receivers Speak from the Heart in Touchdown Program

Imagine being in front of a room full of strangers, either in person or virtually, talking about the lowest part of your life.

Toronto Argonauts Llevi Noel and Kurleigh Gittens Jr. are doing just that, but for a good reason.

The receivers are involved with Peel Regional Police in their Touchdown Program, trying to help young men who have made some mistakes turn things around. Recently they met with representatives of that force at the Emil V. Kolb Centre on Derry Road East, connected virtually with over a dozen young offenders who were incarcerated at the Roy McMurtry Youth Centre in Brampton.

Gittens and Noel each spoke for roughly half an hour, relating the struggles they went through when they were younger, then taking questions.

Noel spoke first. The 29-year old Toronto native grew up in the city’s west end and for three or four years put sports behind him, and that’s when he got into trouble himself. He ran with the wrong crowd, made mistakes that most young kids don’t make, and found himself in hot water.

The audience he was addressing was riveted as he talked about losing two of his friends to violence, one shot, the other stabbed. That’s what helped him turn his life around, though he didn’t completely get out of that life for another couple of years.

There wasn’t a peep heard from the at-risk youth as Noel talked about his redemption; his enrollment at the University of Toronto, his decision to leave U-of-T to continue his dream by moving to Windsor to play junior football, while at the same time working full-time at a car manufacturing plant. 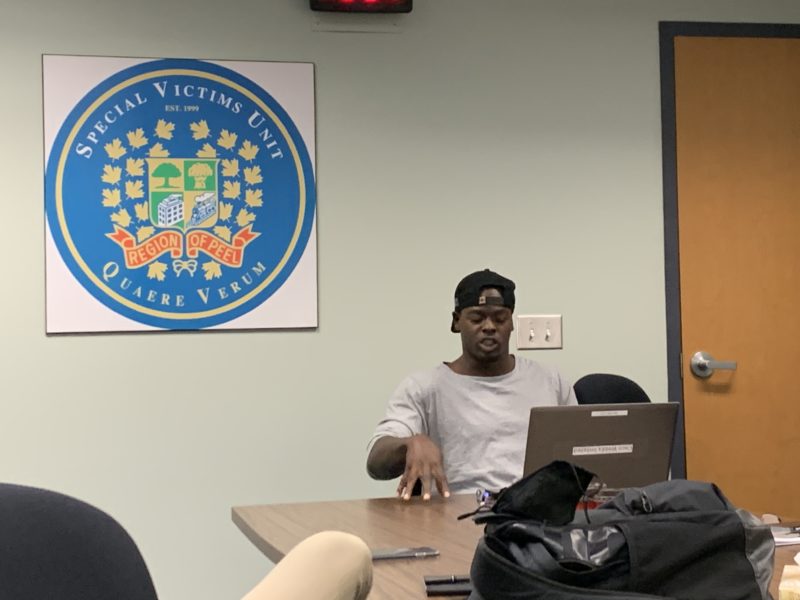 His message was totally relatable to the kids he was talking to. He used to be one of them, but a cognizant decision to turn his life around, coupled with a lot of sacrifice and hard work, allowed him to leave that lifestyle behind.

“I feel that telling my story and trying to, in similar stories to mine, or other troubling scenarios, give them some hope and inspiration that they can get out of it,” Noel explained to Argonauts.ca. “I feel I can relate to a lot of these kids. If they can hear me out and take positive actions, then I feel I need to share that.”

The former All-Canadian at U-of-T knows that his story is relatable to his audience and that helps him gain credibility with them.

“I feel like it’s always easier to believe somebody that’s been through it,” he said. “The coach that’s played, you take that much more out of it because you know this guy did it. He’s been through it, he’s experienced it, he’s perfected it. I obviously haven’t perfected life, but I’ve gone through a lot and I really hope they feel that and connect with it at a deeper level because of that.”

Gittens’ story isn’t as dramatic but is equally relatable to many. He grew up in Guyana in far from ideal conditions. His parents separated when he was young. He explained how he and his siblings slept five to a bed, how he had no shoes on his feet and not enough money to buy lunch every day.

He was raised by his aunts because his mom had moved across the country, while his dad was away from home working, trying to provide for Kurleigh and his siblings.

“Not being able to grow up with your mother takes a big toll on you,” Gittens told Argonauts.ca “My dad was always working to provide for me, so he was never there. Now I appreciate him more as I’ve gotten older. Hopefully it helps those kids, that need to hear it, just being able to take life for granted and appreciate the little things because not everyone has both their parents in their life.” 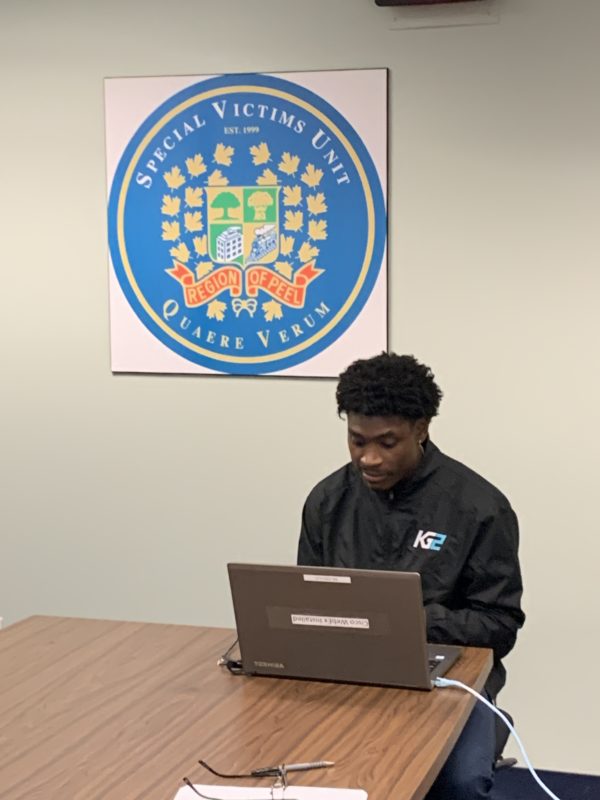 Gittens and his father moved to Ottawa when he was seven. He had to experience saying goodbye to his mother at the airport, emotionally devastating for a child that age, even though he only saw her three or four times a year.

The move to Canada didn’t mean things would be easy. He experienced racism and bullying due to his accent and his discomfort with the English language. His speech is now to the point that you would have no idea he struggled with it a decade and a half ago, but what he says is even more important than how he says it.

He brings them a message of aspiration.

“I just wanted to give them hope that there are better days ahead,” said Gittens. “When those bad times come, you still have to look ahead knowing there are better days ahead. Hope was never in front of me. Now I’m seeing what the hope is. Hope isn’t thinking it’s going to be better tomorrow, hope is thinking it’s going to be better in the future. It may not look like there’s a purpose right now, but in the end it’s all going to be worth it. You just have to stay positive.”

That’s a big part of the reason why this program exists.

Peel Regional Police Chief Nishan Duraiappah is fully on board with the Touchdown Program. He sees the value in bringing together people from different walks of life to try and work with kids who have made mistakes.

“We’re bringing together professional athletes, police officers, community agencies, and young people in a way to strengthen youth engagement, which we all know is the future for a community. It’s a perfect example of what needs to be happening in this time. To the young people, it means the world.”

To be kind, 2020 has not been a great year in terms of the image of police, especially south of the border. Chief Duraiappah told Argonauts.ca that this is not just an exercise in public relations.

“We’re not doing this because we need the positive boost, it’s strengthening the community,” emphasized the Chief. “I really trust the community sees this as an example of the Argos really reinvesting in the young people of the GTA, a police agency and a group of remarkable men and women on the front line, and a lot of community agencies that all have that same coming together. This is exactly what’s needed in these turbulent times.”

“These programs can’t be seen as one offs,” continued Chief Duraiappah. “They are a framework for how we look at youth engagement. Yes, they have to evolve, and I’m encouraged with the opportunities that are before us to continue this work with the Argos.”

As long as the program continues, Noel and Gittens want to be a part of it. Both have given their presentation numerous times to different groups of kids. Noel hadn’t told his story in the past but is getting to the point where he’s more at ease revisiting the most trying time of his life.

“I’m still going through that,” he confessed. “I haven’t gotten to where I’m 100 percent comfortable with it. Before every appearance I feel nervous, it’s nerve-wracking every single time. I believe that as I continue to tell the story it will be easier to tell. I don’t think I ever want to lose those nerves because during the story, it’s something I’m so passionate about that it naturally gets me emotional. I haven’t gotten to the point where everything is easy to say, but the reasons I’m doing it make it a lot easier to follow through with it.”