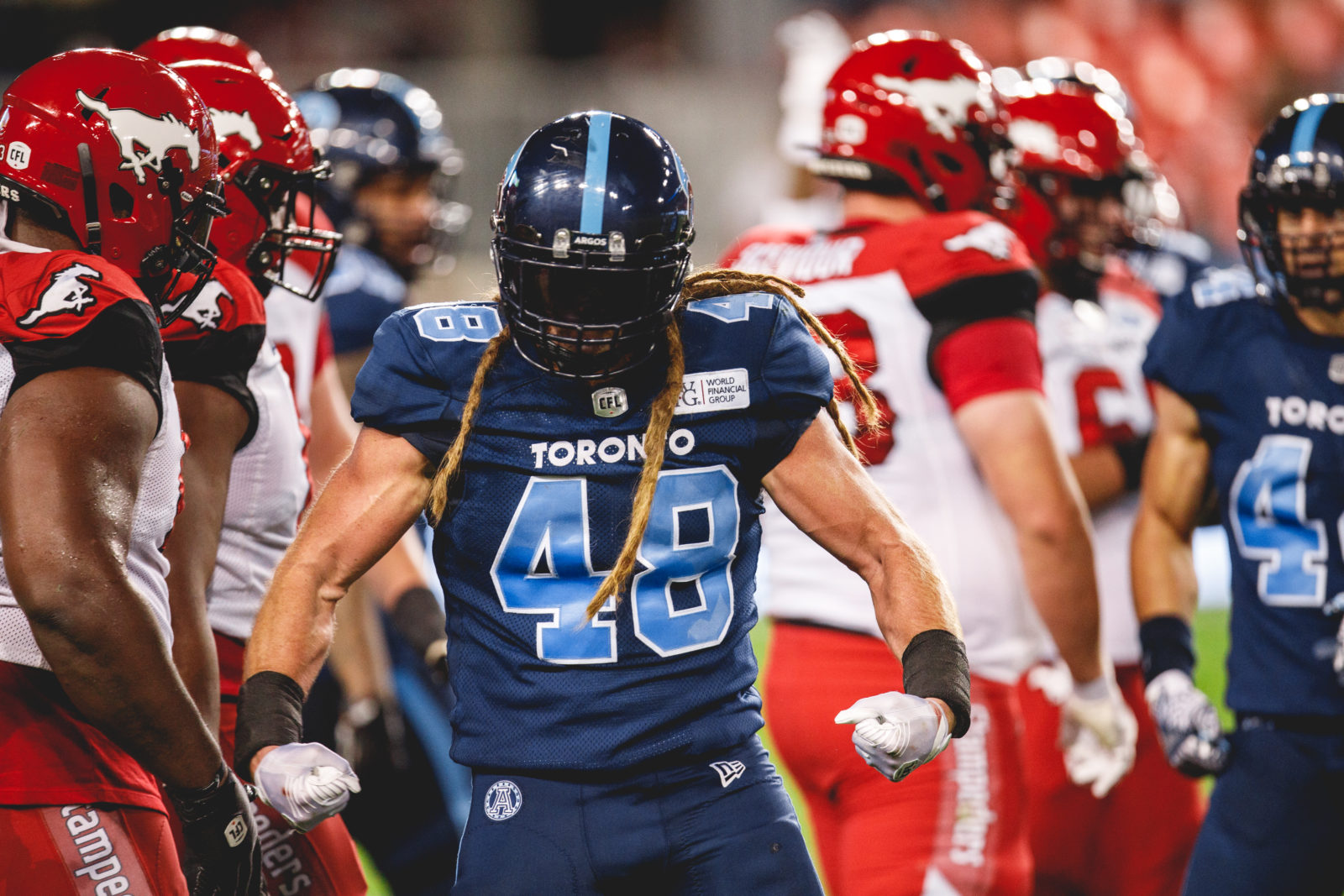 Over the last few weeks Argonauts.ca’s Mike Hogan has been examining the Argos roster position group by position group through the eyes of the coaches. This week, a look at the linebacking corps.

When Kevin Eiben played for the Argos he was a coach’s dream. He was talented, smart, versatile and was an elite special teams player. The Delta, B.C. native still holds the CFL record for most tackles by a Canadian player in a season with 113. He also had a 100-tackle season, the fourth best number by a Canadian.

The only coach to survive the Argos off-season purge, Eiben will again coach the linebackers and is salivating to work with the group.

“We’re more athletic, we’re more nasty,” Eiben told Argonauts.ca in a Zoom interview from his home in Mississauga. “I think that will give us a better presence on the field. We have to see how they all work together, but they’re all fast, they’re physical, they all want to get to the ball, they all want to rip your head off, which is exactly what we’re looking for in a football player, right?”

This year’s linebacking corps is a mixture of veterans and players new to the league. With a short training camp ahead, should there be a season, Eiben knows he’ll have to lean on the vets more than usual, especially as everyone tries to learn the system of new defensive coordinator Glen Young.

Eiben is excited by the entire group, but one relatively unknown newcomer’s name came up on a couple of occasions.

“When Jordan Moore got an opportunity to get out on the field last year, he looked pretty strong,” explained Eiben. “He’s athletic. He has good leadership potential from talking to him on the phone. He’s a bright kid and I think he’s got a ton of potential.”

Eiben broke down the group player by player for Argonauts.ca. The notes after each player are provided by Argonauts.ca, all the quotes are from Eiben.

A couple of notes. Bo Lokombo could play WILL linebacker but is likely slotted as the safety. He will be featured in the breakdown of the secondary. Also, there’s a note after each player’s name to identify the player as a MIKE, or middle linebacker, or a WILL, a weak-side linebacker.

Chris Ackie: 6’2”, 218. WILL. The fourth-overall pick in the 2015 CFL draft returns to Ontario after playing most of his career in Montreal. The Cambridge native and All-Canadian at Laurier had 40 tackles in 10 games last year with the Als. Could play safety as well as linebacker. “He’s a leader. He’s a very bright, intelligent guy. He’s got some good speed and athleticism. I think we’ll have him slotted in as the WILL where we can get him in the short boundary where there’s a lot of action. We want to make sure we have a veteran there to work the short field and hope to find a boundary half who works well with him.” 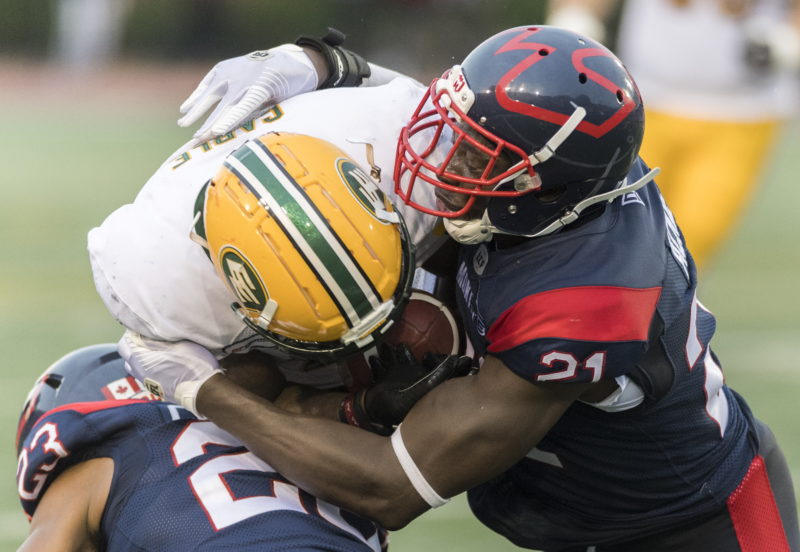 Curtis Akins: 6’1”, 229. MIKE. Bounced around three NFL organizations last year before signing with the Argos in February. Recorded 100 tackles in his senior season at Memphis and was named Honourable Mention All-AAC. “He has a lot of potential. It’s going to be a question of how he gets up to speed on the CFL and how he can make the checks. The MIKE position has got to be a guy that knows his position, but also the front seven, getting people lined up and making the appropriate checks. I’ll have to work with him in the classroom and see how he’s picking up the system. All I know about him is off film and he looks like a pretty athletic guy.”

Jason Beck: 6’1”, 220. WILL. Played linebacker and safety at Eastern Michigan where he amassed 353 tackles. Went to the spring league and attended a mini-camp with Saskatchewan. “Again, a ton of athleticism. He’s a guy that wants to hit you when he gets to the ball. He’s very physical. It’s going to be very interesting to see him at training camp and get a chance to see him in person and see what he can do.”

Jack Cassar: 6’4”, 240. MIKE. The Argos second-round pick, 11th overall in this year’s draft. A Mississauga native who was a two-time OUA First Team All-Star, and a First Team All-Canadian in 2019 after recording 44 tackles in seven games. He was also named the OUA’s Stand-up Defensive Player of the Year. “He’s young. He was a valuable draft pick for us, I’m so glad that we did get him. A hometown boy. He’s a very bright kid. He’s always going to be in position and is someone who can get people lined up. We’re going to see how quickly he can adjust from the college game to the CFL game and see if he picks up the system. I look forward to working with Jack. He could be someone that’s special. It may take some time, but I see him as a four teamer (punt, punt return, kickoff, kickoff return) in the special teams world.”

Travis Feeney: 6’4”, 240. WILL. Moved from safety to linebacker at the University of Washington. Named Second Team All-Pac-12 as a senior. Played last year in the AAF, recording 30 tackles in eight games with the San Diego Fleet. “He’s kind of that in between d-end and linebacker type. Right now, I think we’ve got him more slotted toward the d-end. He’s a big, tall, big body and he can move for that size. We’re going to see if he can play d-end and be that versatile kind of hybrid.”

Kennan Gilchrist: 6’2”, 225. WILL. Back for a second season with the Argos. Named the team’s Most Outstanding Rookie in 2019. Played in 14 games, started six. Finished with 37 tackles, four sacks and an interception. “Another hybrid guy with a ton of speed. We had special packages for him last year and every time he got in it seemed he made a play. He’s got some amazing athleticism. We’re going to try to take advantage of him, maybe bring him, maybe drop him out into more of a coverage, but with those hybrids you can play mind games with offensive coordinators. Is he coming, or is he dropping?” 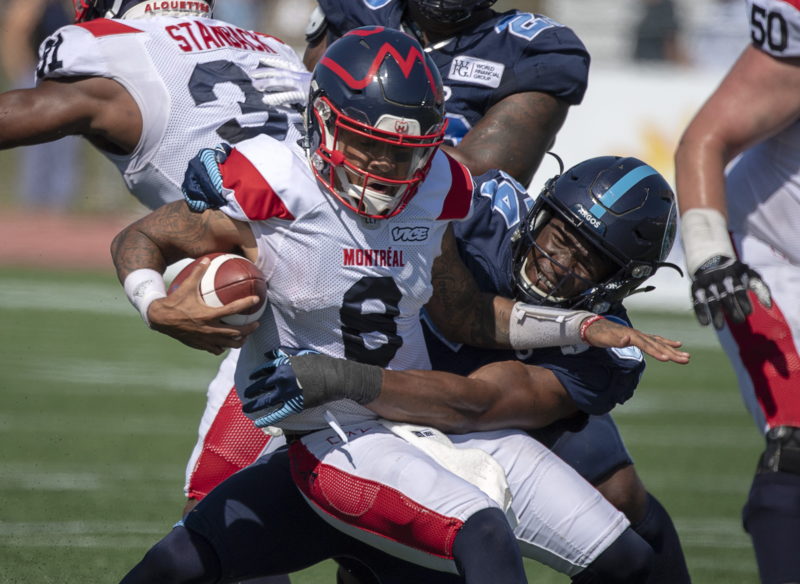 Jeff Knox Jr.: 6’2”, 225. MIKE. Played seven games in Double Blue in 2018 before finishing the 2019 season in Ottawa after trying his luck in the NFL. Had 112 defensive tackles as a rookie in Saskatchewan in 2015. Began his NCAA career as a running back at California University of Pennsylvania. “We have him slotted at the MIKE, but he could also play the WILL. He’s been in the league for several years; he was in Ottawa playing the MIKE last year. He was with the Argos the year before, so I got a chance to talk to him and get to know him. He’s a smart kid and he’s physical and knows the CFL now we have to see how quickly he picks up Glen’s system.”

Paul Kozachuk: 5’11”, 214. WILL. A product of the University of Toronto who spent the last two seasons in Montreal. The London, Ontario native had a 12.5 tackle game against Carleton in his final year with the Blues. Athletic, he posted a 39” vertical jump at the CFL Combine. “I got a chance to work with Paul back at the University of Toronto. Paul’s a guy that’s a nice addition from Montreal. Special teams is all he really played while he was in Montreal. We’ve got him slotted at the WILL, but I think he’ll be a guy who’s fighting to make sure he gets on the roster as a special teams player.”

Nelkas Kwemo: 6’3”, 235. MIKE. The Argos second-round pick, 18th overall, in the 2018 CFL Draft. He had 16 special teams tackles last season, 15 the year before. The Montreal native was a First Team All-Canadian at Queen’s in 2017. Totaled 149 tackles in 28 games as a Gael. “He took some big strides last year. He got a chance to play some MIKE. Every time he was always in the right position and he made plays. He’s a smart guy. He knows how to get the front lined up properly. I like Kwemo and I think he’s got a good chance to get some reps at the MIKE position.”

Jordan Moore: 6’3”, 225. MIKE. Joined the team in a trade with Hamilton on February 12 that saw the Argos acquire him and a negotiation list player for a pair of neg list players. Had a five-tackle game in the season finale against the Argos. Concentrated on track at LSU and was a two-time All-American hurdler and member of the 4 X 100 team. Won the SEC 110m hurdles. Transferred to University of Texas at San Antonio and played safety. “I think he’s going to be a special linebacker in this league. He’s a guy that’s got some good size, he’s smart, he’s got a nastiness that when he comes downhill he’s going to fill that hole. He’s going to make sure everything he hits goes backwards. I’m looking forward to working with Jordan and I think that he’s got a good chance of being our starting MIKE.”

Nick Shortill: 6’2”, 227. WILL. The Nobleton native split his first five seasons between Montreal and Hamilton before signing with Toronto as a free agent in February. The Als selected him in the second round, 13th overall, in the 2015 CFL Draft. The McMaster product was an All-Canadian and the OUA’s Outstanding Defensive Player with in 2014. “Shortill is a guy that has played mostly special teams with Hamilton but got a chance when Simoni Lawrence went down to fill in at the WILL and didn’t look out of place. He was always around the ball. He’s got a nose for the ball. He’s a great athlete. I worked with him at McMaster my first year as defensive coordinator and I like Shortill. He also brings that nasty and he’s got some good size, he’s going to lay the pop on you. He’ll be a guy competing for that WILL position.” 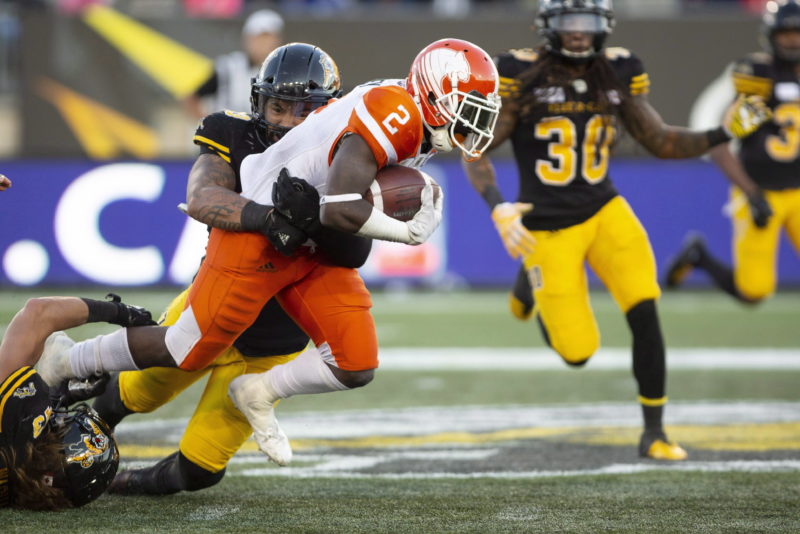 Bear Woods: 6’0”, 245. MIKE. Returns to the Argos for a fourth season after spending his first four years in Montreal. Has played just seven games over the last two seasons but recorded a whopping 54 tackles in those games. A team leader. Has been named the East Division’s Most Outstanding Defensive Player twice. Had four tackles in the Argos 2017 Grey Cup win over Calgary. “I’m a fan of Bear. He’s a guy that works his tail off. He’s a guy that’s going to be around the ball, he just has a nose for it. He’s a tackle machine. Bear has that veteran presence in the room that you like to have because he makes the room better and when I’m not coaching the guys up, he’s the one organizing meetings amongst the players and making sure all the players are getting into meeting rooms and making sure they’re learning the stuff that as a coaching staff we’re trying to get across to the defence. We’ve got to keep him healthy. When he does get in, he plays fast, he plays physical, but he’s battled the injury bug. We’ve got to do everything we can to keep him healthy. If it’s going to be a short season that should be pretty beneficial for Bear to keep him healthy.”