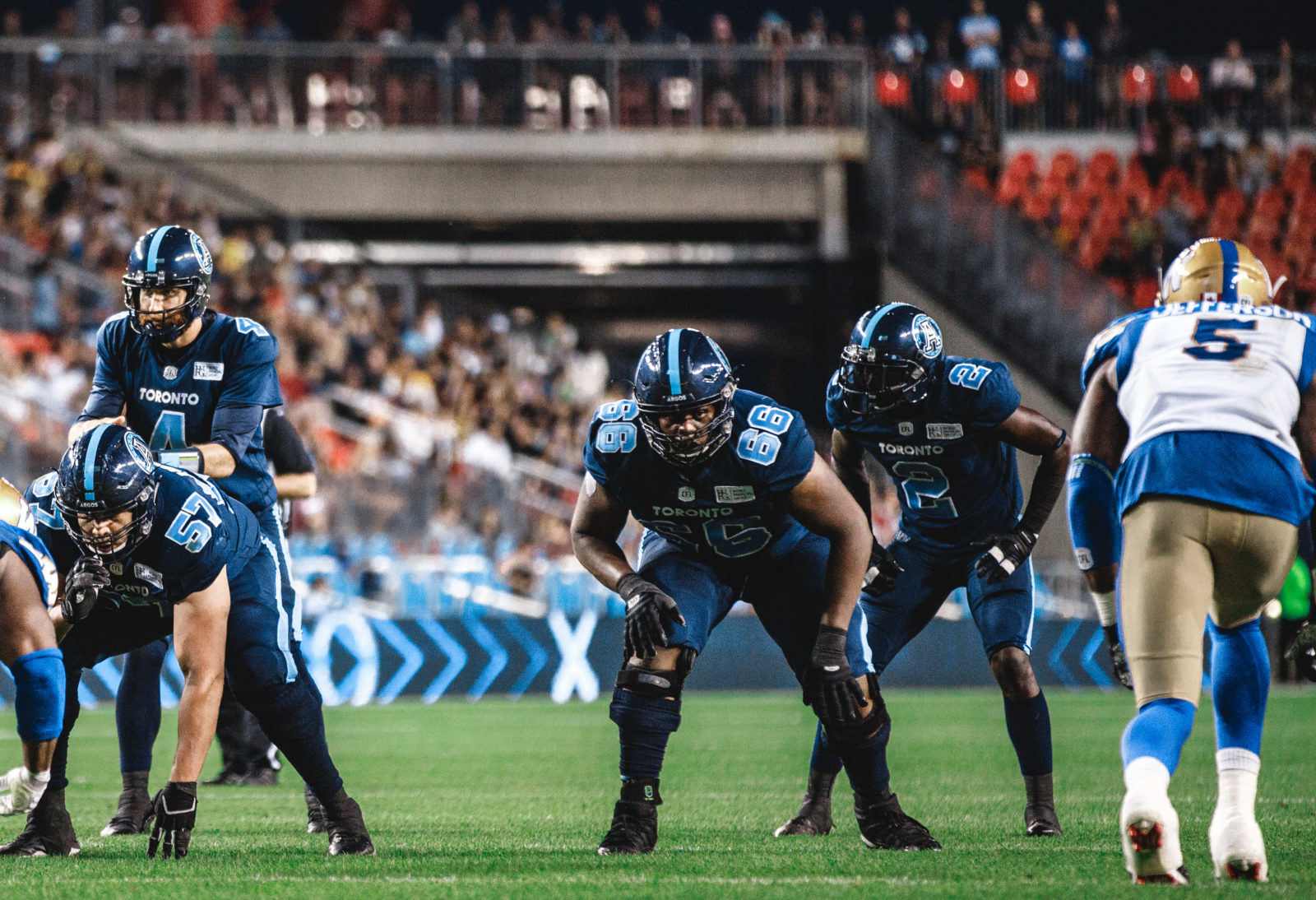 Isiah Cage had his life mapped out. He’d play in the NFL, then get into law enforcement when his career ended. That may have changed on May 25th when George Floyd died at the knee of a Minneapolis police officer.

“I used to be hungry,” the Argos offensive tackle said of his post-football ambition, “But as I’m getting older and as I’m thinking about it more, I know one man can’t make a change. As corrupt as the system is, and how broke the system is, I feel like I don’t want to even touch the badge because it’s got so much blood on it.”

Cage seemed uncomfortable saying that in a Zoom interview from his off-season home in Ann Arbor, Michigan. It was almost like he couldn’t believe he was saying those words out loud, as if he was resigned to the fact that he couldn’t make a difference, no matter how badly he wanted to.

For most, growing up on the south side of Chicago is unimaginable. At times that area seems more like a shooting gallery than a major American city. As of May 25th, the day Floyd was killed, there were 191 homicides in Chicago, the vast majority the result of gun violence.

That’s the area where Cage grew up.

“In Chicago gun violence is pretty bad. It did become kind of routine. If you were at the park and they started shooting you just know how to run and duck and go home. If you think something is about to start happening, you maybe want to leave before they start shooting.”

It was in that climate that Cage was raised, getting “the talk” as a young man from his parents. Not the talk about the birds and the bees, but the one about how to deal with the police if and when he was confronted by them.

“I was probably nine or ten years old,” he said with a smile. “I saw a firefighter on my block. I remember seeing these guys hop off the truck and they’d work as a team. I liked the way they swooped in and helped people. So at first I wanted to be a firefighter, but then I got a little older and thought I might not feel comfortable running into a burning building, and then I thought I could be the next best thing, and that’s when I thought about going into law enforcement.”

Working for the police wouldn’t be something new to the Cage family. Isiah’s mother Diana has been doing clerical work for the police, with duties like filing juvenile reports. How did she react when her son gave her the news that he wanted to join the force?

“She wasn’t necessarily too happy about it because of the culture, especially in Chicago,” he recalled. “But when I was young that was my first impression of civil service and public service, and that was something I wanted to do.”

Cage moved on to play at Concordia University in St. Paul, Minnesota for a year, then transferred to the University of Wisconsin–Eau Claire, where he would become a three-time All-Conference player on the field, a criminal justice major in the classroom.

It was also there where racism became more prevalent. 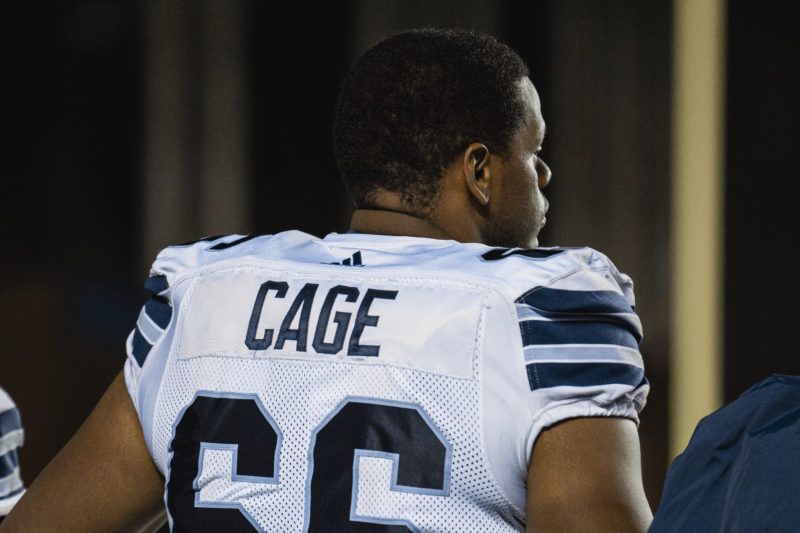 “When I first got there, there were maybe 10,000 people and maybe 140 were of African American descent, and some of them came from Africa, they were international students,” he recalled. “I was in classes where I was the only black guy in the room. Going to a predominately white university, sometimes I felt like I couldn’t mess up, because if I did something bad it reflected on my whole race.”

Even if he wasn’t messing up, being black still came into play.

“I’ve had people call me the N-word on the football field on a couple occasions,” Cage admitted. “Players that I went up against. I’d pancake a guy (knock him flat) and he’d just get up and call me the N-word. One time I was walking up the street with some friends, we were just coming from the bars and it was hot outside. All of us had our shirts off, it was black and white guys, and somebody drove past and told me to ‘put your shirt on you (N-word).’”

Needless to say, the coward in the car didn’t use the abbreviation.

All these life experiences were, along with his classroom studies, helping Cage prepare for his post-football career in law enforcement. He spent a couple of weeks at a police academy in preparation as well, but the events of May 25th changed things.

“I haven’t watched the full video and I don’t think I’m going to,” said a somber Cage. “I can’t watch this video because I can’t watch another black man die again and sit here and listen to people on Facebook try to justify what he did wrong and why it’s his fault that he died.”

“I actually stumbled upon a snippet of it by mistake, just scrolling through my phone, and I was trying to get off and not watch it, and even then, I saw pictures of the guy kneeling on his neck. It was rough. And from what I read he kneeled on his neck for eight or nine minutes, and the guy was screaming for his mother and saying I can’t breathe, and then seeing a picture and the guy had his hands in his pockets.”

That led to an adult version of “the talk.”

“I was talking to my dad about that and he said the biggest thing that got him was there were four officers, and the man was handcuffed, and the cop was on his neck and he’s saying he can’t breathe, and you’ve got him – the situation is under control and you’ve got your hands in your pocket, just kneeling on his neck. Now it’s not that he’s trying to control the situation, it’s just you doing what you want to do, deviating from what you were probably trained to do. It was a blatant disregard for human life.”

Cage has also talked to his parents about the systemic racism that’s a part of the police culture, something his mom has seen firsthand working with the police in Chicago.

Another hot topic has been the widespread looting that occurred in the days immediately following Floyd’s death. Cage was eager to go there.

Cage has had “good and bad interactions with the police, just like I’ve had good and bad outside of my race. I try not to generalize,” but admits that right now it feels like it’s an “us versus them” situation between the black community and the police. 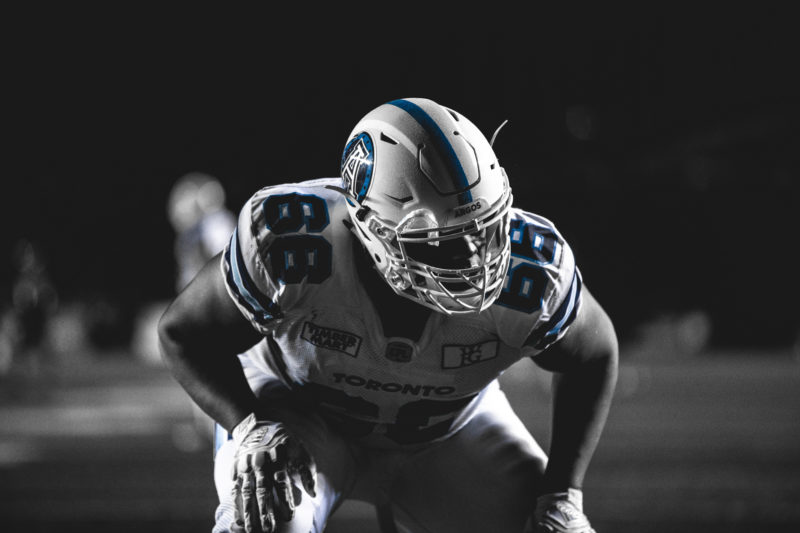 “I feel like community policing might help get rid of that in the minority communities, but the relationship is going to take a lot of healing, it’s pretty strained.”

Cage’s thoughts on this issue could fill ten of these articles. He talked about the negative stereotypes perpetuated in movies and on television, gave more examples of the subtle and not so subtle racism he’s faced, and how at 6’4”, 315 pounds his size has at times even made things worse for him.

From a football perspective he’s healthy again after missing most of last year with an injury. Post-season shoulder surgery has him ready to go physically, though mentally he’s like everyone else, frustrated by the uncertainly of what lies ahead.

Sadly, that uncertainty now applies to his post-football career as well.

“Cops never had the best relationship with minority communities to begin with. Obviously now it’s a lot worse, it’s way more strained in pretty much every community. I feel like it would be hard for me to put on a badge and go to work, and I’m trying to do the right thing, and I’m also trying to prevent things like that from happening to anybody, but my own people will look at me as a traitor. Then you try to deal with the aspect of maybe dealing with corruption with the department on top of that. I don’t really see how much change I really would able to make in the grand scheme of things. It’s just hard right now. I feel like I might have to find something else to do to give back and help people, but being a law enforcement officer, it might not be for me.”