Hogan: To a former Argo “This time it’s different” 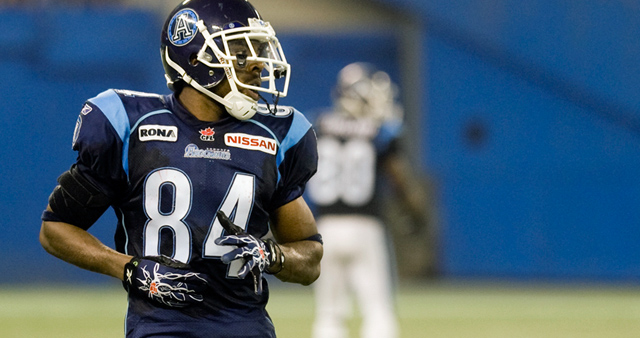 Hogan: To a former Argo “This time it’s different”

The events in Minnesota have opened a deep wound for many people of colour in North America, one that has been scabbed over time and time again for some 400 years.

Once again, the scab has been violently ripped off.

It has affected different people in different ways. Some simply seem numbed by the recurring instances of racism and racist violence over the years, others have reached their breaking point with the death of George Floyd.

The affable former wide receiver is not a household name, even among devout Argo fans. He spent a couple of seasons in and out of the lineup in Toronto, all the while participating multiple times as a speaker in the Argos “Huddle Up” anti-bullying program.

His final game in Double Blue was the 100th Grey Cup, where he won a championship ring.

Tranks grew up in the Uptown area of Philadelphia, north-west of the city core, attending Martin Luther King High School, a school he describes as “all black.”

“The only white people we saw in our schools were the teachers,” said Tranks, though that changed when he first went to Seton Hill University, located just south-east of Pittsburgh. “I never experienced racism until I came here to Western PA. There was no interaction with white people (in Uptown). From the cops? Of course, but even then, it wasn’t until I was maybe 30 where I realized being profiled by the cops isn’t normal.”

The conversation hadn’t gone more than two minutes before that topic came up, without the former receiver being asked about it.

“As a black man we’re told not to say anything wrong, don’t make any sudden moves,” he said in a Zoom conversation while sitting in a park located just outside the training facility he owns in South Pittsburgh. “That’s not how you handle the cops, those are human beings like we are, but white people talk hellish to the cops. White people say whatever they want, and the cops just take it. It’s completely different when there’s interaction with white people and black people – and that’s a fact.”

Which brings us to George Floyd, the man arrested for buying a pack of cigarettes, allegedly with a counterfeit $20 bill. Moments later he was dead, with four Minneapolis policemen now facing charges, one of whom faces a second-degree murder charge.

In the last month or so the black community has suffered through the release of a video showing the fatal shooting death of Ahmaud Arbery, shot while jogging in Georgia, and the story of Breonna Taylor, an innocent woman shot at least eight times and killed by police in her own apartment in Louisville, Kentucky while they were looking for a drug dealer.

The Floyd death, like Arbery’s, was caught on video for all the world to see.

“I was speechless,” admitted Tranks when asked about his initial viewing of the Floyd killing. “First I’m thinking ‘Is he dead?’ Then it was ‘Is anyone else seeing this?’ This is the worst thing that I’ve ever seen. With body cams we’ve seen it before, Alton Sterling (shot and killed by police in Baton Rouge, Louisiana), the list goes on.”

The Floyd death was different for Tranks, a calm, cool man by nature, but pushed to an uncharacteristic outburst on his social media accounts.

“This one is different because there’s no excuse,” he said matter-of-factly. “There’s no leeway, there’s no justification.”

After reciting a litany of other black people killed at the hands of the police, the receiver was about to turn into a pitcher, delivering the first curveball of the discussion.

“It’s weird because I’m not mad at the system right now,” he explained. “My frustration and anger is at the black community speaking out against black people for any reason right now. Black people are speaking out against the looting, black people are speaking out against the protests, mainly the looting, the looting is a hot topic. What we need right now in the black community is solidarity. In public, we don’t need to be going back and forth with each other at all. Whether we agree or not, these young cats on the front line, they’re taking action, whether it’s right or wrong, they’re moving forward, doing it their own way. This is just a reaction, that’s all it is. I’m looking forward to the next step, I would love to get past the looting. The term ‘No Justice, No Peace’, that’s not just a cool internet saying, that’s an actual thing.”

It’s that uncharacteristic sentiment that shows how deeply the 34-year old has been affected by this. He’s not a violent man. He’s not someone prone to overly harsh language, and he’s trying to set a positive example for his son Dominic, now six-and-a-half.

“He doesn’t know about police brutality,” said the father of his son. “I tell him to make sure you know who you are. We (Tranks and his girlfriend Brandi, along with Dominic’s mother Kaitlin) have been teaching him black history, especially now that school is out, reminding him that’s he’s strong, reminding him that he’s powerful, reminding him he can be whatever he wants. I just want him to be confident.”

The conversation between interviewer and interviewee is something that should be done more often. A black man in his mid-30’s from an all-black area of a major American city and a white man in his late 50’s from a mostly white mid-sized Canadian city talking openly about an incredibly sensitive subject. Unafraid to ask tough questions of one another, equally open to giving honest answers.

When the ‘official’ interview was over, the conversation continued for another 20 minutes or so. It meandered from what each is doing now, he owns and operates CTC Training in South Pittsburgh offering high-performance training, which you can follow on Instagram, Facebook, or go to Sammytranks.com. To which music he feels best exemplifies his feelings right now. He’s listening to a lot of Larry June these days because he finds the rapper uplifting. To instances of racism that he’s experienced in the Pittsburgh area, some subtle, some not so much.

Mainly it dealt with race.

Tranks has been marching in peaceful protests in Pittsburgh, thankful that football and an education got him out of a tough environment in Philly and hopeful that recent events – as painful as they are to watch – helps his country take the next step in the march to true equality.