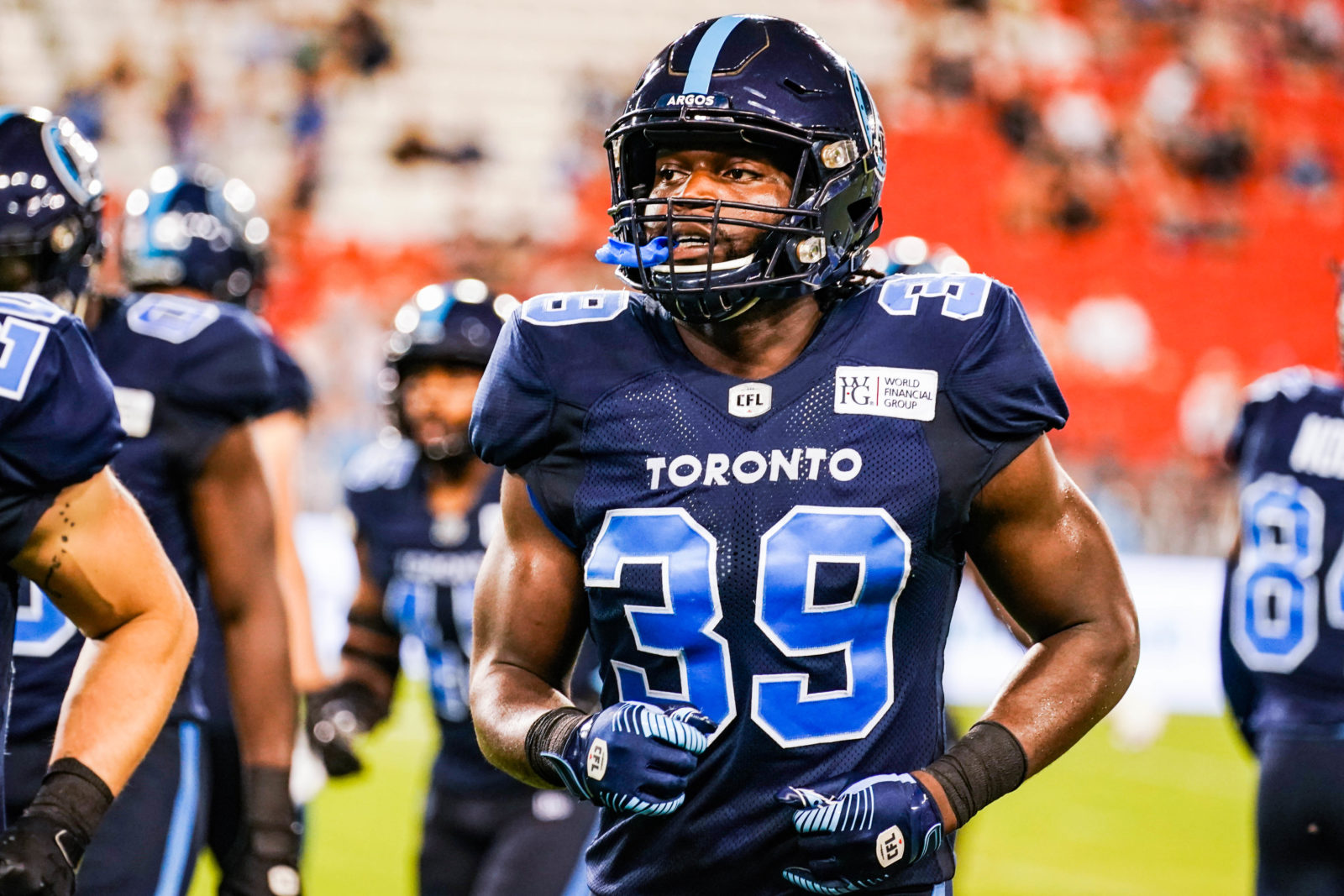 The CFL season is in flux. The global pandemic has caused a postponement of the opening of training camps, and the structure of the season itself isn’t known.

The CFL Draft, however, will go on as scheduled.

On Thursday, April 30, the league’s annual selection process will take place over conference call – its usual method – as teams welcome college and university players into the league.

The Argos have three picks in the top eleven; their own first-round pick, second overall, the ninth overall pick acquired from Winnipeg in the Zach Collaros deal, and their own second-round pick, eleventh overall

Since the territorial protection aspect of the draft ceased in 1982, the Argos have drafted in one of those spots a total of 14 times; five times at two, five times at nine, and four times at eleven.

Here’s a breakdown of those picks. 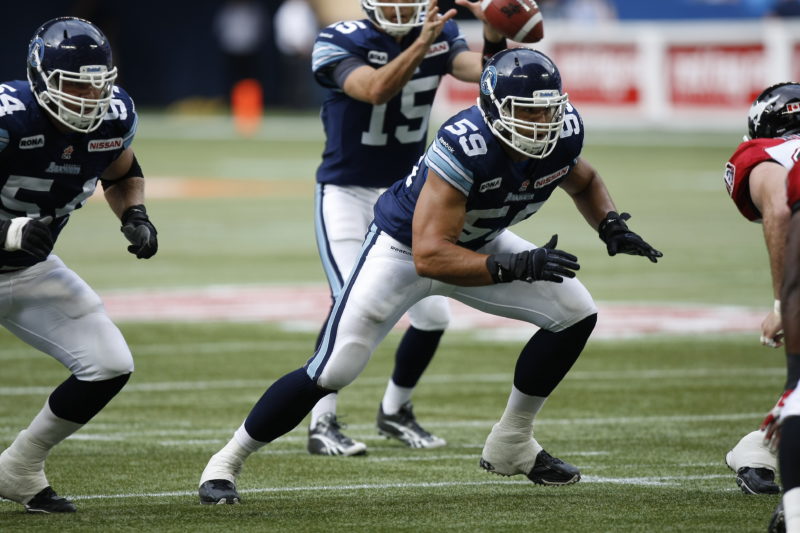 A west coaster, born in Squamish, B.C. and a product of Washington State. The 6’8” offensive lineman wore Double Blue between 2010 and 2013, playing in 61 regular season, and six playoff games. He was a key component of the 2012 Grey Cup run as the left guard. Eppele was claimed by Ottawa in the 2014 Expansion Draft.

The defensive tackle entered the league with a great resume; two Vanier Cup championships with Laval and the winner of the J.P. Metras Trophy as the best down lineman in USports football. He’d play almost two seasons in Toronto before being traded to Edmonton in October 2010 for Noel Prefontaine. Legare had six tackles in his rookie season, two more in a dozen games in 2010 before the trade. His final season in the CFL was 2013 with Calgary.

A 6’7”, 315-pound offensive lineman who played at the University of Kentucky. The Montreal native played 13 games as a rookie in 1999 and was injured for the 2000 season. Released by the Argos in June 2001, he’d play sparingly for four years in Ottawa and Calgary.

The good news? The product of Concordia University handled all three kicking duties well at Concordia and was a First Team All-Canadian punter. He is one of just two kickers in the history of the CFL Draft to go as high as number two overall, the other being fellow Concordia grad Warren Kean, chosen by the Eskimos in 2007. The bad news? Miller-Johnson never played a game with the Argos, despite being re-signed by the Argos in 2003 when Noel Prefontaine signed with the Kansas City Chiefs. He did kick briefly for the Ottawa Renegades.

To date, the most successful of the second-overall picks. A Montreal native who played at James Madison, the linebacker made a quick impact with the Argos, winning a Grey Cup in his rookie year, 1997. After playing in 54 regular season and four playoff games in three years with the Argos, he left for Montreal as a free agent. Wiltshire was a two-time East All Star, with the Argos in ’98 and with Ottawa in ’03. He would play for a decade with four different teams, not missing a game until his ninth season. 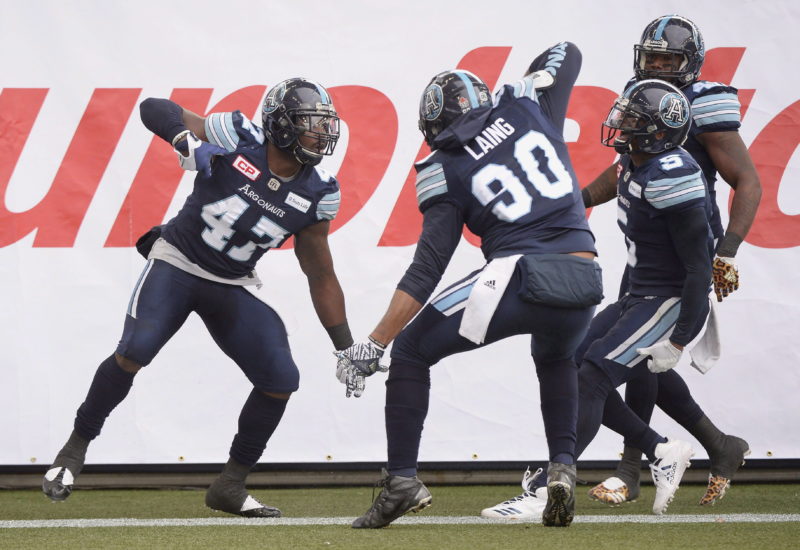 Last year Smith showed some of the reasons why he was selected as high as he was. The defensive end – a Brampton native from Laurier – showed speed, strength, aggressiveness and a willingness to learn. He gained more and more trust from the coaching staff as the season progressed. Smith finished the season strong, recording a two-sack game against Ottawa in October.

The jury is still out on this pick. Hunter is an offensive lineman from North Bay and Bowling Green University. There is no question he’s a fantastic player, he just won a Super Bowl with the Kansas City Chiefs. This is a perfect example of the risk/reward aspect of taking a player this high who has NFL aspirations.

There’s no other way to describe this pick than highly successful. A native of Edmonton who played at Iowa State, Laing was a mainstay on the Argo defence for 88 games over six seasons, highlighted by his key role in the 2017 Grey Cup win. He has career 33 sacks, all with Toronto, though he did play one regular season game with Ottawa after returning from the Miami Dolphins in 2016, winning a Grey Cup with the Redblacks in the process. He returned to the Argos the next year. The four-time East All-Star signed in Ottawa this off-season as a free agent.

A perfect example of a high-risk pick not working out for the Argos. Kaczur, an offensive lineman from Brantford who played NCAA football at Toledo, never made it to the CFL. Instead, he had a tremendous career with the New England Patriots, starting at offensive tackle for five seasons. He was their third-round pick in 2005. A back injury at training camp in 2010 ended his career.

Dubuc played 16 regular season games in the 1997 Grey Cup championship year, but didn’t play in the playoffs. He was released in November. A running back/receiver/returner at Texas Tech, he carried the ball just twice and caught as many passes for the Argos. DuBuc would convert to a full-time slotback and play two subsequent seasons with Winnipeg, where he was the Blue Bombers leading Canadian receiver each year. 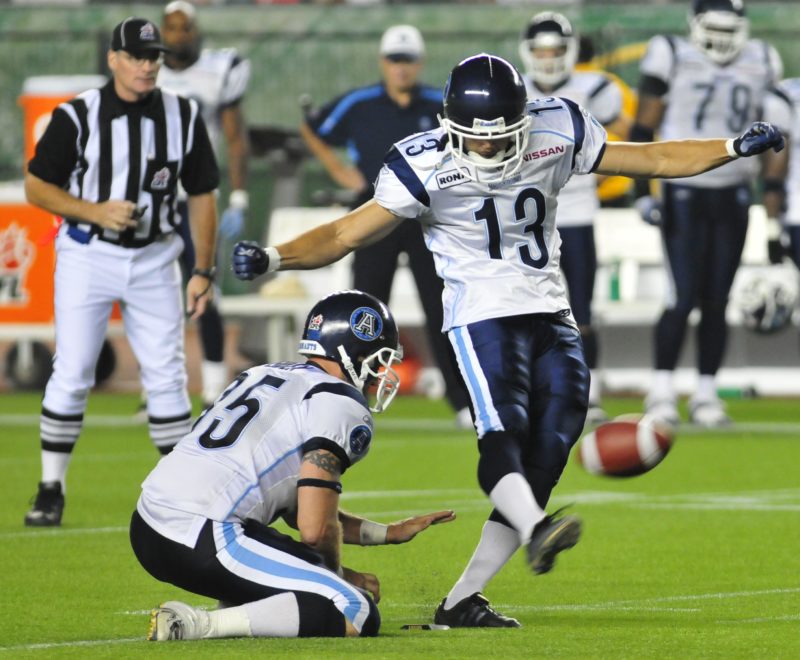 A strong-legged kicker who was also an All-Canada West defensive back at the University of Saskatchewan. After two seasons in Toronto he was traded to Edmonton in December 2011 in the deal that brought Ricky Ray to Toronto. He’d play five more seasons with his hometown Eskimos.

An Ottawa native who played at the University of Kentucky. The linebacker immediately became a significant contributor on special teams. He was the Argos Most Outstanding Rookie in 2006, leading the team with 23 special teams tackles. His biggest plays came in a game against Winnipeg, where he blocked a punt and returned it to the one-yard line, while also forcing a fumble that DB Leron Mitchell returned for a touchdown. Played a total of 71 games in Double Blue, including three playoff contests.

A tight end from Weber State, the Burlington native was drafted to become a starter in John Huard’s double tight-end sets. He only played nine games in Toronto, catching just two passes for 42 yards while playing some on special teams. He didn’t resurface with another team after being released.

A product of Western Kentucky, Benoit played 14 games in Toronto, all in the 1995 season. He registered eight defensive and a dozen special teams tackles. The linebacker was released by the Argos during the 1996 training camp. The Toronto native ended up playing for nine seasons in the league, mostly with Edmonton, with other stops in B.C., Montreal and Saskatchewan.