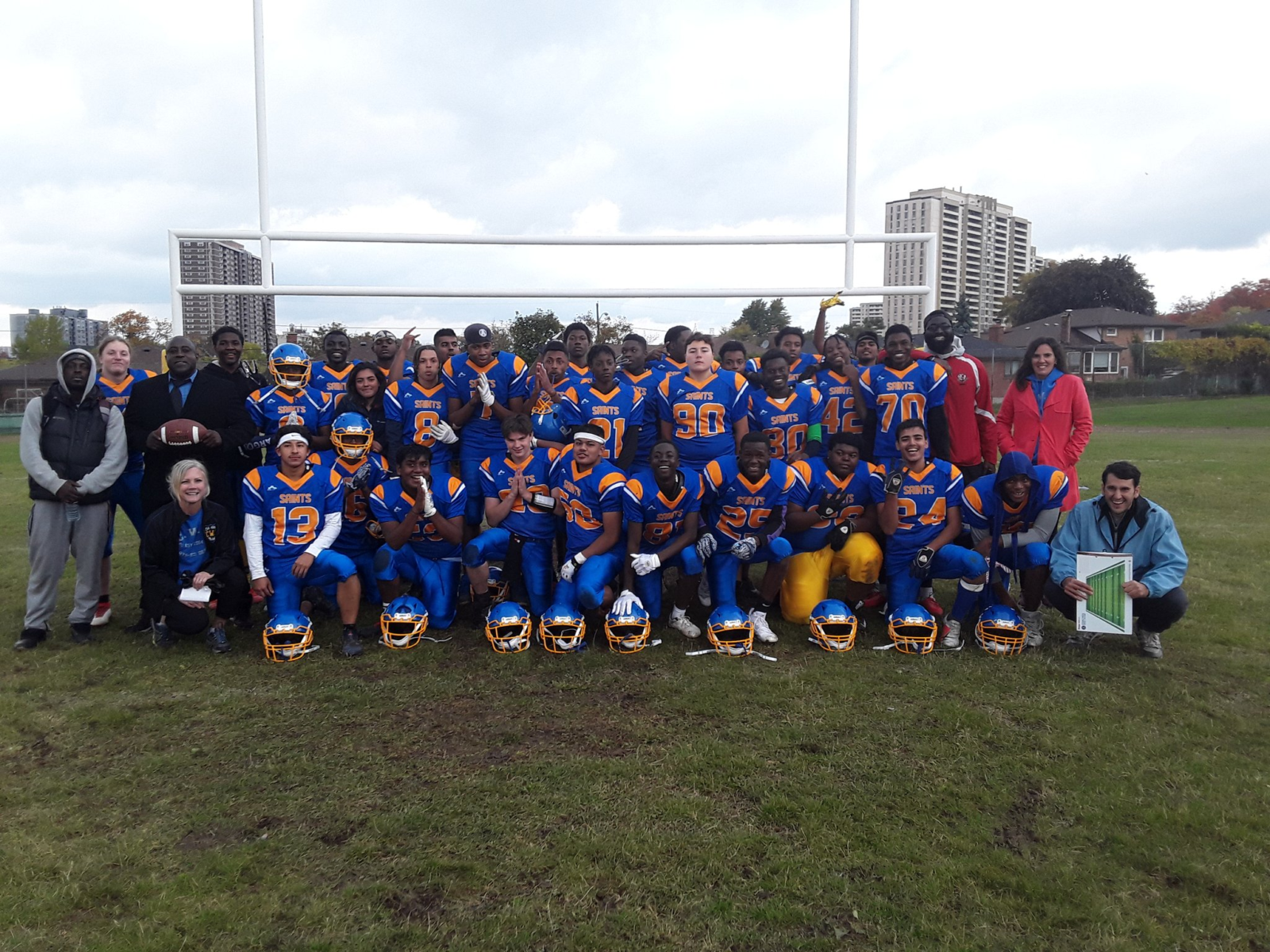 In Canada, football is not the apex sport. Hockey holds that title, while basketball, especially in the GTA, is in hot pursuit.

For football to continue to grow it will rely upon a group of dedicated people at the grassroots level. In Toronto, one of those women is Tracey Galbraith.

She has been a teacher for the last 20 years at C.W. Jefferys Collegiate Institute, about a kilometre due south of York University, just below Finch, equidistant between Keele and Jane.

Galbraith loves sports. She’s the head of the athletic department and has coached basketball, volleyball, softball and even ultimate frisbee.

One thing she hadn’t counted on was becoming the school’s Pied Piper of pigskin.

Football and Jefferys have been a lot like Brad Pitt and Jennifer Aniston. They were good for a long time, there was a breakup, then a possible rekindling, and now things are looking pretty good.

The sport was played at the school in the 80s, but then folded. It came back in 2009-10, but then went back in the mothballs for almost a decade. This year, mostly because of the work of Galbraith, the Saints came marching back. 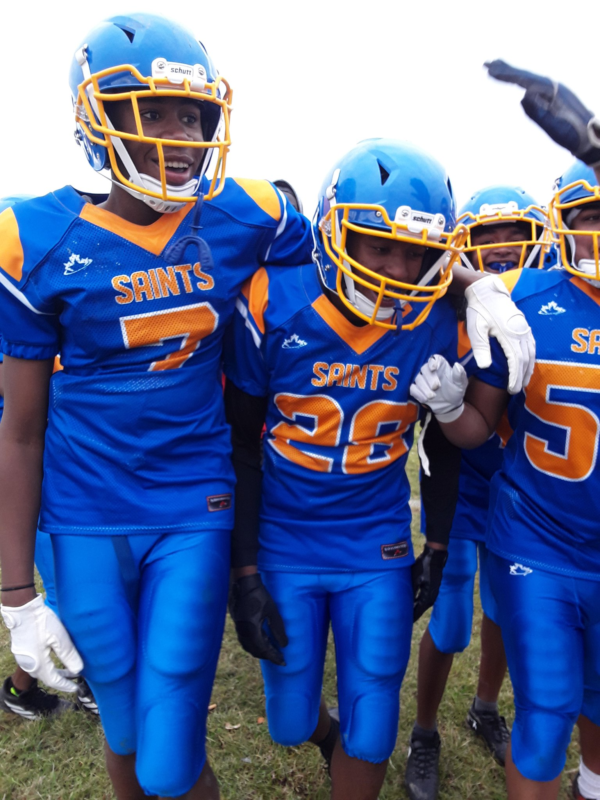 “Some of the guys asked, ‘Why don’t we have football?’” Galbraith explained to Argonauts.ca. “I told them that it’s going to take a lot of work. The boys talked to me again and I told them that if you really want to do it, okay.”

Suddenly she had taken the role of bringing football back from the dead. Oh, and she was right about the “a lot of work” part.

“I knew nothing about it, I thought it was a monster,” she confessed.

“To be honest, I took flack from some of my colleagues,” she recalled. “It was risky, there was the risk of the kids getting injured, but it turned out to be highly successful.”

So away she went, without the full support of her staff, with no football experience, and without the needed $20,000.

This should be easy.

The first step was the funding. She devised a plan and submitted it to the Urban Priority High School Fund Committee at the school. Since Jefferys is considered an inner-city school with at-risk students, it gets funds each year which are allocated for different programs.

She sat on that board and begged and pleaded with staff, students, parents and the principal, Patrick Lee. She faced a boatload of questions and as many skeptics, but when all was said and done, she was able to get the grant to buy uniforms and equipment and get the full support of her principal.

The biggest obstacle had been hurdled, but now she needed to order the equipment and find some coaches.

“I reached out to other schools for their help getting equipment,” Galbraith recalled, “They helped out with the orders. Then I reached out to the Toronto Jets looking for names of people who might be interested in coaching the team.”

Kris Chamberlain answered the call. The head coach of the junior varsity Jets was a star player with York Memorial Collegiate and Western Tech. He would take the reins as Jefferys head coach.

Carlo Onorati also stepped up. He’s coached at St. Mike’s and Don Bosco as well as leading the Toronto Junior Argos varsity program and scouting for the U-of-T. He’d join Chamberlain as his right-hand man.

From a coaching perspective the Saints had gone from rags to riches in a hurry.

Galbraith had slayed the monster. Football was back.

One of the people who understands the importance of the sport at Jefferys is Jamal Campbell, the Argos offensive tackle.

He was a basketball player at the school when the Argos “Level the Playing Field” program arrived. It selected Jefferys as the first non-football school to help bring the sport back via funding. Campbell was in the right place at the right time, though when he tried to suit up for the first time he wasn’t quite sure how to put on all the equipment.

He’d never have been given the opportunity to play football at Jefferys, or at York University, without the dust the being knocked off the football program back in 2009. He’s thankful the program started when it did and knows how important one person was in its re-re-emergence this year.

“She’s always been very involved,” said Campbell of Galbraith. “She just has a passion for it. She was one of the driving forces behind bringing football back to Jefferys. At a time when they really needed someone to step in and be the person to chase down the kids for interest, and chase down people to bring it back.”

The big man is fully aware of the hard work involved to pump life back into the program.

“There were challenges looking for coaches and putting the whole thing together,” recalled Campbell. “To see her be there throughout the whole process, then to see her come out to the game and enjoy it, see the product that’s on the field and the excitement in the kids eyes and the opportunities some of these kids are getting with more football opportunities, it’s exciting to see her do that.” 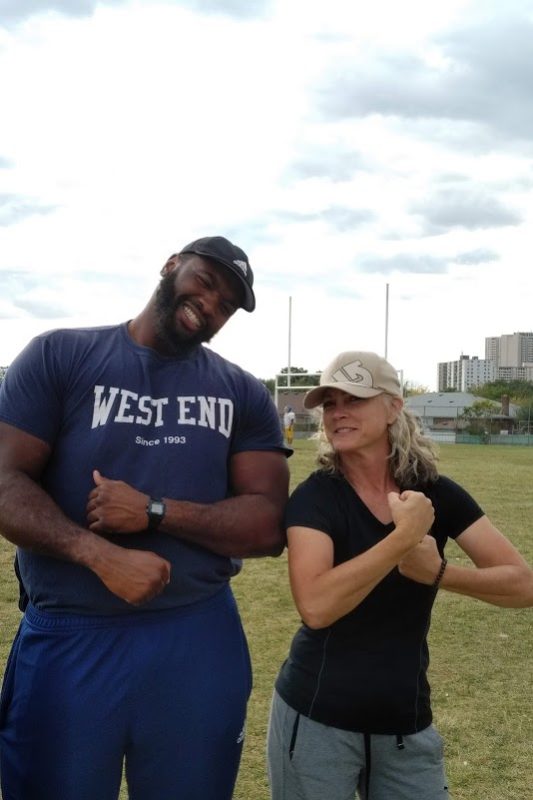 Campbell was one of those kids. If not for support for the program in 2009 he’s not an Argo today.

If we fast forward to 2030 there may be pro football players, or just kids who learned life lessons from playing the sport, thankful for the enthusiastic leadership of Tracey Galbraith.

She is the driving force behind C.W. Jefferys football.