Something Special is Happening Here 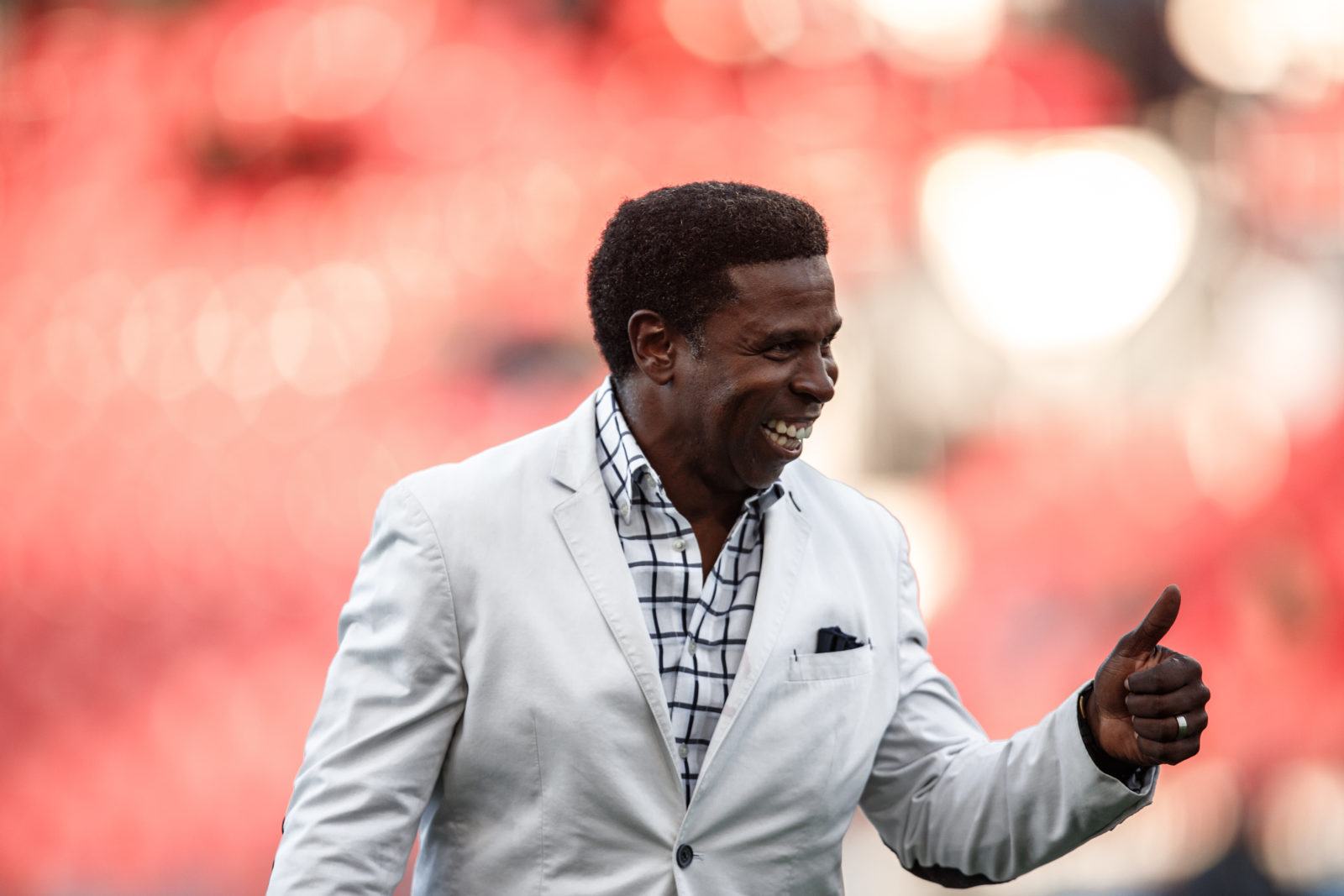 Something Special is Happening Here

“There’s no place like home” – Dorothy, The Wizard of Oz.

The Toronto Argonauts did quite a bit of shopping on or around February 11, but many of their purchases required no shipping fees. You see, a lot of the merchandise was local.

In the early stages of, or just prior to the free agency period, a total of eight players with Ontario connections were signed by the Argos. All but one of them have ties to the GTA. 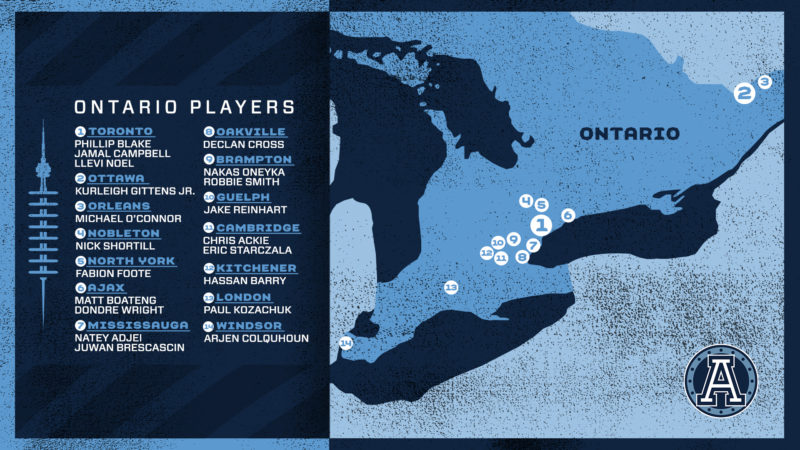 “The intention was to sign the best guys,” General Manager Michael “Pinball” Clemons told Argonauts.ca. “The revelation was those ‘best guys’ were also from here.”

Clemons has emphasized the importance of building a foundation for the team, which he believes – in terms of players – can be broken down into four groups; quarterbacks, offensive and defensive lines, and Canadian talent.

The latter was something the club decided could be done via free agency. With that in mind, receivers Juwan Brescacin and Natey Adjei (both Mississauga) were signed. Linemen Philip Blake (Etobicoke) and Fabion Foote (Rexdale) came home. Linebackers Chris Ackie (Cambridge), Nick Shortill (Nobleton) and Paul Kozachuk (U-of-T) return to the area, while defensive back Arjen Colquhoun (Windsor) also heads back to Ontario.

Llevi Noel (Toronto) was re-signed by the Boatmen just before he could have become a free agent.

There are short-term and long-term reasons for the philosophy. Most importantly, the players who were signed are talented as five of the eight newcomers could be starters. 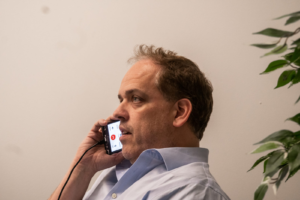 “Both sides of our organization have to be better,” said John Murphy, the Argos vice president of player personnel. “We have to be better on the field, but the club has to be a better business. Everyone who works here, in ticketing, in marketing, in the community, knows this isn’t a Monday to Friday 9-to-5 job. We will stress the things needed for the Argos to improve.”

If that means targeting talented players with GTA ties, so be it.

“If we sell a thousand, or two thousand tickets because those players are local,” he continued. “Or if fans are buying more jerseys, that’s a philosophical change in who we are. It makes it easier to sell and market the team with local area guys.”

That’s something the team is taking into account, but the general manager is adamant that the players simply aren’t being signed because of their postal codes.

“First, we want them to be the best players,” stressed Clemons. “These were the best players and they just happen to be native to the area. So yes, it was intentional, but we were extremely fortunate as well. Intention and good fortune came together in this particular instance.”

This is the first year for Clemons and Murphy to put their fingerprint on the organization, and getting talented, local players in Double Blue is a big part of the culture change.

“We feel that once we bring these guys here, they won’t want to go anywhere else,” added Murphy. “When local guys are listening to Brescacin and Arjen and Ackie and Natey, that they’ll want to come here.”

Ackie is thrilled to be coming home. The Cambridge native had “four or five” teams interested in his services when the free-agency period arrived but heading to the GTA was an easy choice.

“It’s nice to be close to home,” the Laurier product told Argonauts.ca. “When I was in Montreal my family and friends couldn’t make it to every game, so other than the games in Toronto and Hamilton they usually couldn’t make it.”

It wasn’t just the proximity to his hometown that made him sign the contract, it’s everything going on with the organization, starting from the top.

“There was a lot of negativity around the Argos, like when they were training at Don Bosco,” said Ackie. “But I like what they have in place now working out of BMO Field, and I love what they did in free agency. I also love that Pinball is there. You want to be with someone you trust and he’s that guy. He’s a great person to learn from and a great man in the community.” 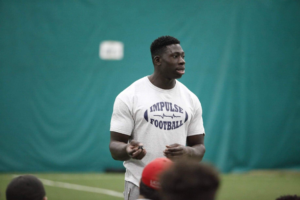 Being able to give back is one part of the move home that genuinely appeals to Ackie. In the first couple of minutes of his conversation with Argonauts.ca he brought up working in the community on a couple of occasions without being prompted.

“It’s really important to me,” explained Ackie. “I want to make an impact in my community. I also want to get more kids involved in football. I remember growing up my parents couldn’t afford to put me in camp. I want to make sure these kids can go to camp. It’s more than just football.”

His next opportunity to give back is March 8th, as he’s hosting a football camp in Kitchener (register at impulsefootballcamp.com) with a handful of his former Laurier teammates and other players, including current Argos Nakas Onyeka and Fabion Foote, former Argo Ronnie Pfeffer, and Calgary defensive end Ese Mrabure.

The cost is just $20 for the day and this year the proceeds will coincidently go the Michael “Pinball” Clemons Foundation; the charity selected well before Ackie signed with the Double Blue.

As happy as the linebacker is to be back, his level of enthusiasm pales in comparison to that of Mississauga native Natey Adjei.

The receiver was drafted by the Argos in the third round of the 2013 draft and spent the first two seasons of his career in Toronto before heading to the Eskimos. Last year he had his best season by far with 58 catches for 534 yards.

Edmonton released him February 3 and even though his agent brought up other teams that were interested, he signed with his hometown team the next day.

“It was definitely an easy decision,” admitted Adjei. “Especially for a childhood fan of the team. Even when I was in Edmonton, I followed them because I’ve always had friends on the team and wanted them to do well.” 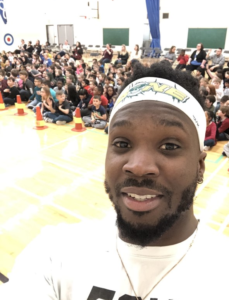 It was a perfect fit. Not only is he from here, but so is his wife Melody. For his first two years in Northern Alberta she stayed back in Toronto with their daughter – they have two children now – making him miss home even more.

“You don’t know how good you have it until you leave,” confessed Adjei. “I missed family time. Being gone for six months is a long time. I missed holidays, weddings, birthday parties. It was tough, missing my daughter’s first words. Getting back on bye weeks just isn’t the same.”

The Adjeis maintained their downtown home, a fifteen-minute walk from BMO Field, so it really does represent a homecoming.

With the St. Joseph Secondary School product signing with the Double Blue before the free-agency period opened, it allowed him the chance to assume the role of a college recruiter, trying to get players to join him here.

“I recruited as many GTA guys as possible,” laughed Adjei. “We have so much talent in this area, and DaVaris’ (Daniels) girlfriend is from the area.”

Playing the role of a good quarterback Adjei targeted multiple receivers. He and Juwan Brescacin have been friends since their days growing up in Mississauga. The two of them, along with Daniels, who became great friends with Brescacin in Calgary, had talked about the opportunity to play together and they now get their chance.

“The buzz is crazy, I talk to Juwan on a daily basis about how excited we are, said Adjei. “Something special is happening here.”