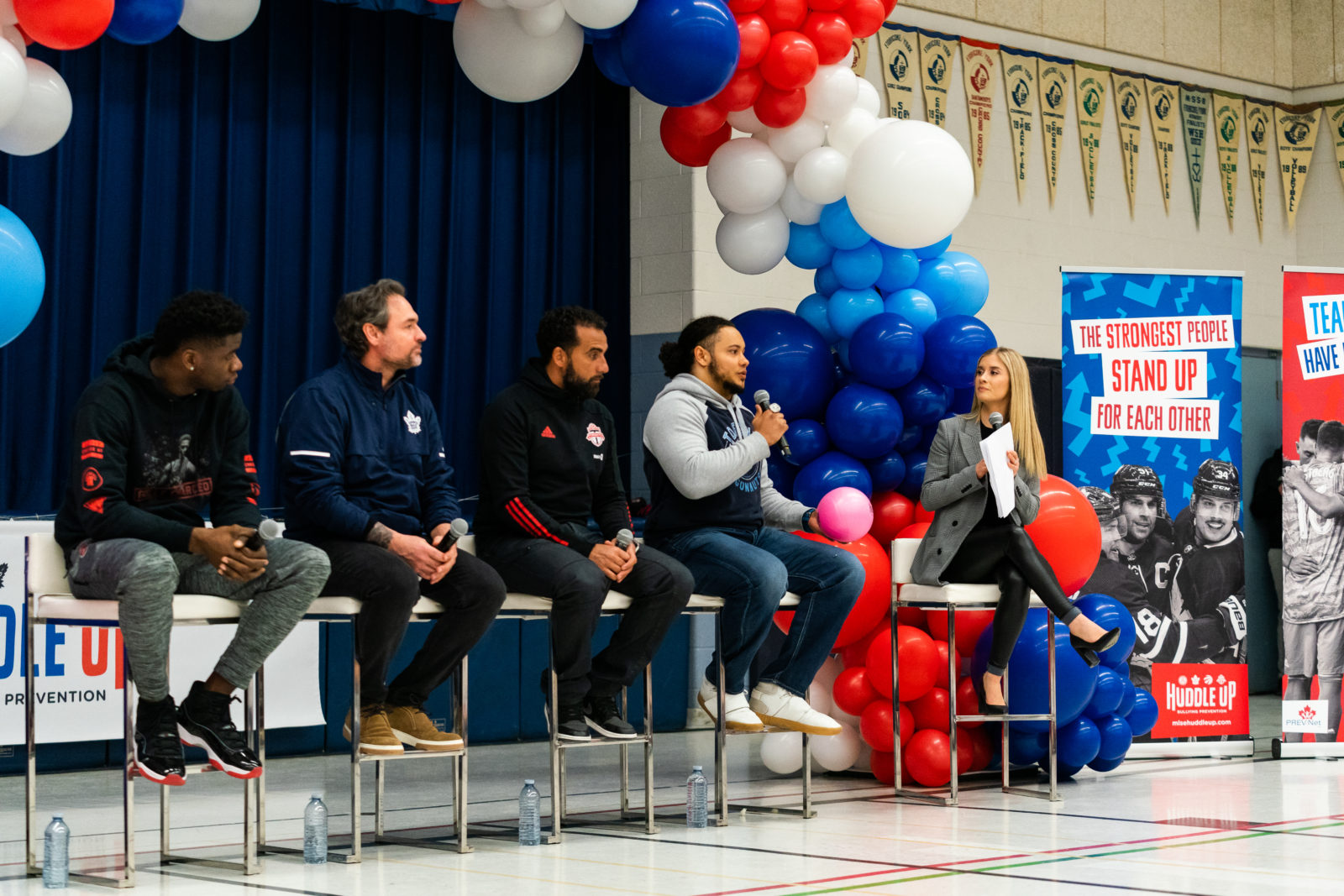 It’s become an important part of what the Toronto Argonauts do, and who they are as a member of the community.

The team’s Huddle Up bullying prevention program has expanded this year, as the team’s MLSE family members, the Raptors, Maple Leafs and TFC have joined the Double Blue’s campaign to show kids that bullying is not acceptable in any form.

On Wednesday the program began its 19th season at St. Gregory Catholic School in Etobicoke and worked its usual magic, but with some additional star power.

Jason Colero founded the program. The Argos Director of Education and Community Programs been with the organization for 35 years and is thrilled his initiative is expanding.

“It was a strong message before, but now we’ve elevated it,” said Colero at the conclusion of the assembly. “It’s hard not to be star struck.” 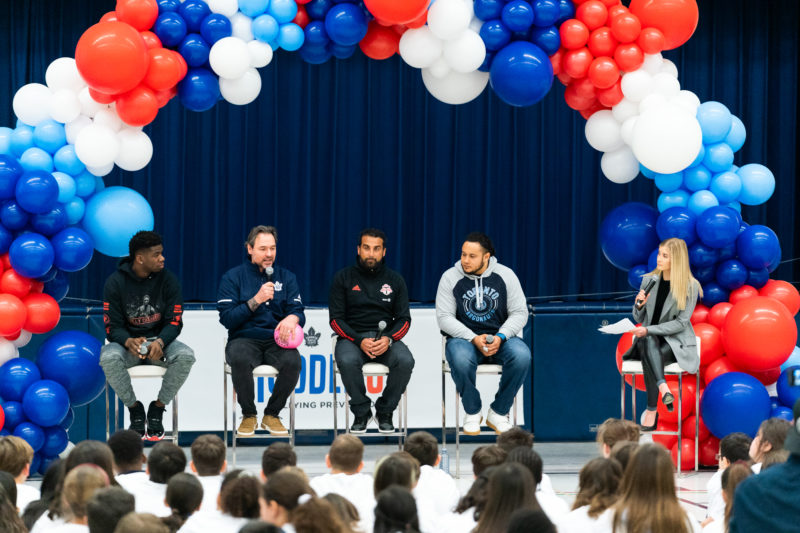 Argos fullback Declan Cross was the program’s veteran, joined at St. Gregory by Terence Davis II of the Raptors and a pair of alumni, Dwayne De Rosario from TFC and Darcy Tucker of the Leafs.

“I’m sitting there thinking this is Huddle Up,” said Colero. “This was a strong message to begin with and now we’ve elevated it. It’s huge.”

There’s no question that the added star power brought out the media. At last year’s first Huddle Up event there was just one camera, on Wednesday there were closer to ten.

“When the Argos came under the MLSE umbrella this was a program we knew we could replicate across all of our teams,” said MLSE’s Vice President of Community Affairs Michael Bartlett.

“The Argos are really setting the standard for what community engagement can look like through schools,” continued Bartlett. “Huddle Up has been an award winner for years and now teaching this curriculum with the Leafs, Raptors and TFC attached as friends of the Argos is a great way for the Argos to lead the way.”

For some of the MLSE employees in attendance it was their first hands-on experience with the program, even though they were very familiar with what it was all about. In this case, witnessing Colero and crew in action confirmed their high hopes.

“You see the energy in the kids,” continued Bartlett. “They get the once-in-a-lifetime opportunity with four team ambassadors in front of them, but the core of the curriculum is still impressive. It’s classroom rooted, but it can also be accessed outside of the classroom so it becomes a life teaching lesson as well.”

Cross is no stranger to the program. He seemed at ease telling his story of being bullied.

Yes, Declan Cross, the 5’11”, 220-pound mound of muscle was once bullied. He was undersized, even thrown in a garbage can at one point. He can relate to what some kids unfortunately go through and wants them to know that things can change.

“I was entering high school. I was playing football and I was undersized, so I wanted to start working out,” recalled the Oakville native. “I signed up for a gym and it was (then Argo linebacker, now coach) Kevin Eiben’s gym. He saw me there every day, but I wasn’t strong and didn’t believe in myself.”

Then came the conversation that would change his life. 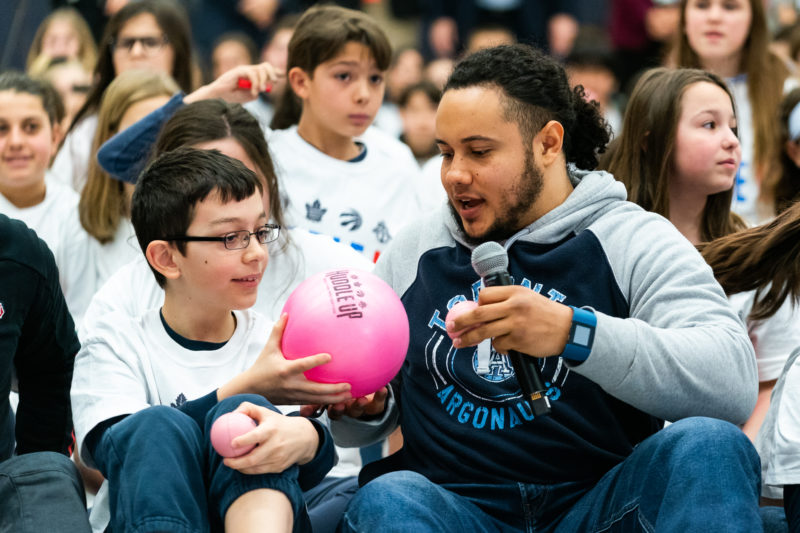 “He said ‘I see you working, I see you training, you’ve got some potential. If you want to play professionally you can do it. I believe in you, but I need you to believe in you too,’” said the fullback. “That was all it took. As soon as a guy like Kevin Eiben said that, a guy who was a superhero, a guy who was larger than life, I believed every word.”

It was a case where a kid heard a pro athlete give some encouraging words and it became more than just lip service. Cross is hoping his multiple appearances in schools can have the same effect.

“All I want to do is help kids the way I was helped,” said the Argo. “I feel like I was given such a huge gift. When I do these visits, I’m just trying to help these kids, focus on these kids, they’re capable of so much more than they may think they are.”

Over the course of the program over 600,000 students have listened to Colero and his Double Blue ambassadors spread his anti-bullying message.

Now with the other three MSLE teams involved it gives more kids the chance to do the workshops, then receive visits from pro athletes who may have been in their shoes at one point.

To register, or learn more about the program, visit MLSEhuddleup.com.