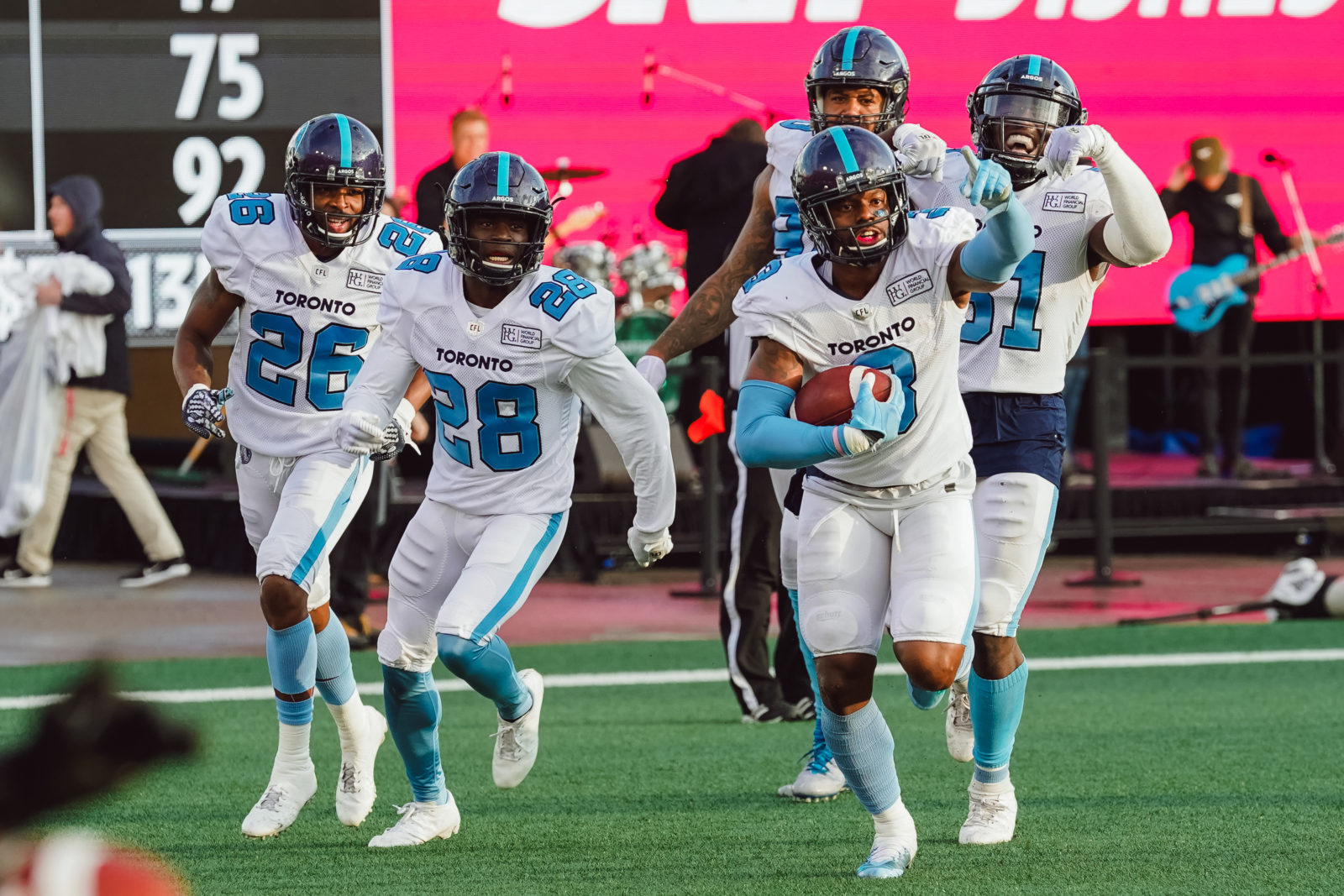 Last year the numbers told you a lot about the Toronto Argonauts defensive secondary. Too many passing yards allowed (308 per game) with a league-worst 36 TD passes surrendered. Opposing quarterbacks completed 72.2 percent of their passes.

With that in mind, the new management group of General Manager Michael Clemons, Vice-President of Player Personnel John Murphy, Head Coach Ryan Dinwiddie and Director of Canadian Scouting Vince Magri have been hard at work, looking to upgrade the back end.

“The extended roster (teams can now have 100 players under contract in the off-season) helps,” Murphy told Argonauts.ca. “We’ve been able to run through film, free agents, players from other leagues, NFL cuts, AFL all-stars, and college kids who went to NFL camps.”

For the Argos player personnel department, it’s been a lot of leg work, and hundreds and hundreds of hours spent watching video. 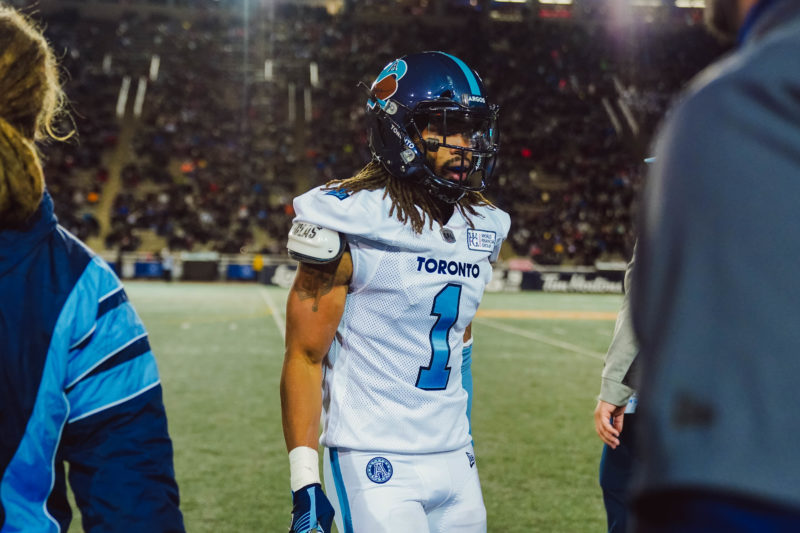 After the Monday signings of Shaq Richardson and Jeff Richards, there are currently 16 defensive backs under contract, nine of them new, with another half-dozen on the roster but still unsigned.

The acquisitions have been accomplished without the input of a defensive coordinator, though Murphy expects one to be announced in the next week or two. With that opening in mind, there has been consensus from the management group about the kind of players they want to bring into the Argo fold.

“If there’s a commonality in the players we’re signed, it’s versatility,” said Murphy. “The guys aren’t only a cornerback, or a free safety, or a linebacker. There’s also more length to these guys.”

Despite having been successful in expanding the player pool, the hunt for top-end talent is far from over. Members of the Argos personnel department; Murphy, Magri, Coordinator of Logistics Alex Russell and Player Relations Advisor and Football Operations Assistant Matt Black, are scattered around the United States, preparing to take in NCAA all-star games. They’ll meet as a group in Florida, before heading one state west for Senior Bowl activities in Mobile, Alabama.

The brain trust will continue to talk to players of interest, all the while preparing for CFL free agency, which begins on February 11.

But there’s also much work to be done when the new DC and his staff is announced. The Argos want to make sure they have the players who can fit the system, and that those players can do what’s expected from them on the field.

“The next part, including the new coaching staff,” said Murphy, “Is getting everyone in the building and evaluating our own free agents and seeing if the roles we’re asking guys to do is filled. You don’t want to have a guy fill in in-season when he’s not comfortable in a role he’s not familiar with.”

Jobs are there for the taking, making the secondary and linebackers groups worth keeping a close eye on when training camp opens.

With all that in mind, here’s a thumbnail sketch of all the DBs currently under contract, and where they may fit best in the secondary. 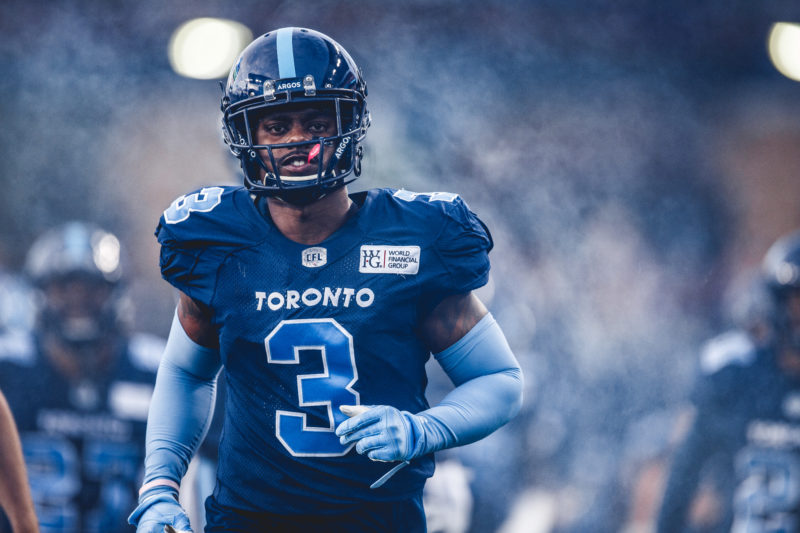 Matt Boateng: A second-year Argo who will compete for the field corner spot. An Ajax product who was the team’s second-round draft pick last year. Speed, speed, speed. Needs experience.

Jalin Burrell: Has the versatility Murphy mentioned to play either corner or halfback. Signed with the Argos late last season and played two games.

Abu Conteh: Signed in mid-December after spending his first three CFL seasons in Winnipeg and Calgary. A National who will likely compete for reps at field corner.

Alden Darby Jr.: A veteran who had five interceptions last season. Has played all over the secondary, but instincts make him best suited for safety.

Jonathan Dowling: In his third season in Double Blue. At 6’3” he’s an interesting prospect to play at field corner.

Qudarius Ford: A starter in the 2017 Grey Cup win. Has played virtually every position in the secondary, including at the Sam linebacker spot. Ideally would find himself at halfback.

Cam Glenn: An All-ACC safety and another late-season addition in 2019. His size and cover skills make him an ideal candidate to compete for the Will linebacker spot.

Chris Humes: Has seen limited playing time in two seasons in Winnipeg. Would probably be better suited to play on the inside at halfback, or perhaps at Sam linebacker.

Ermon Lane: This is an interesting player. ESPN’s No. 2 receiver in the country coming out of high school, he bounced back and forth between receiver and safety at Florida State. Great size at 6’3”. Could play safety, or perhaps compete at Sam.

Davontae Merriweather: The Indoor Football League’s Defensive Player of the Year in 2019. Perhaps another candidate to play Sam.

Malik Reaves: A two-time all-conference player at Villanova. Has good cover skills and size. Could find a home at halfback.

Jeff Richards: Won a Grey Cup in Ottawa, picking off Bo Levi Mitchell in the 2016 championship game. Headed to the NFL afterward. Returns to the CFL and will likely get a look at safety or halfback. Being 6’2” is a big asset for a DB.

Shaq Richardson: Played well for the Argos at the end of the season. Penciled in at boundary corner. Would also be an interesting choice to play Sam.

Robert Woodson: Entering his fourth season with the Argos. Could play either field corner or field half.

Dondre Wright: An Ajax native who joins the Argos after three seasons with Montreal and Winnipeg. He’d best slotted in as a safety. 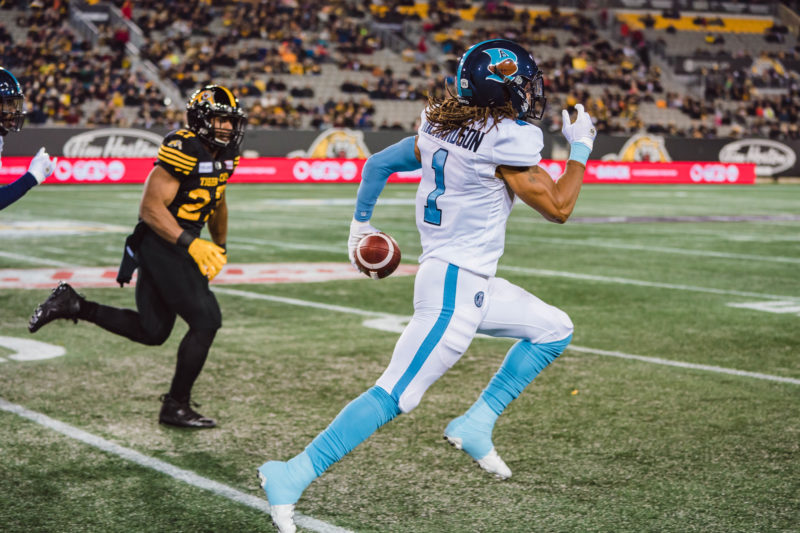