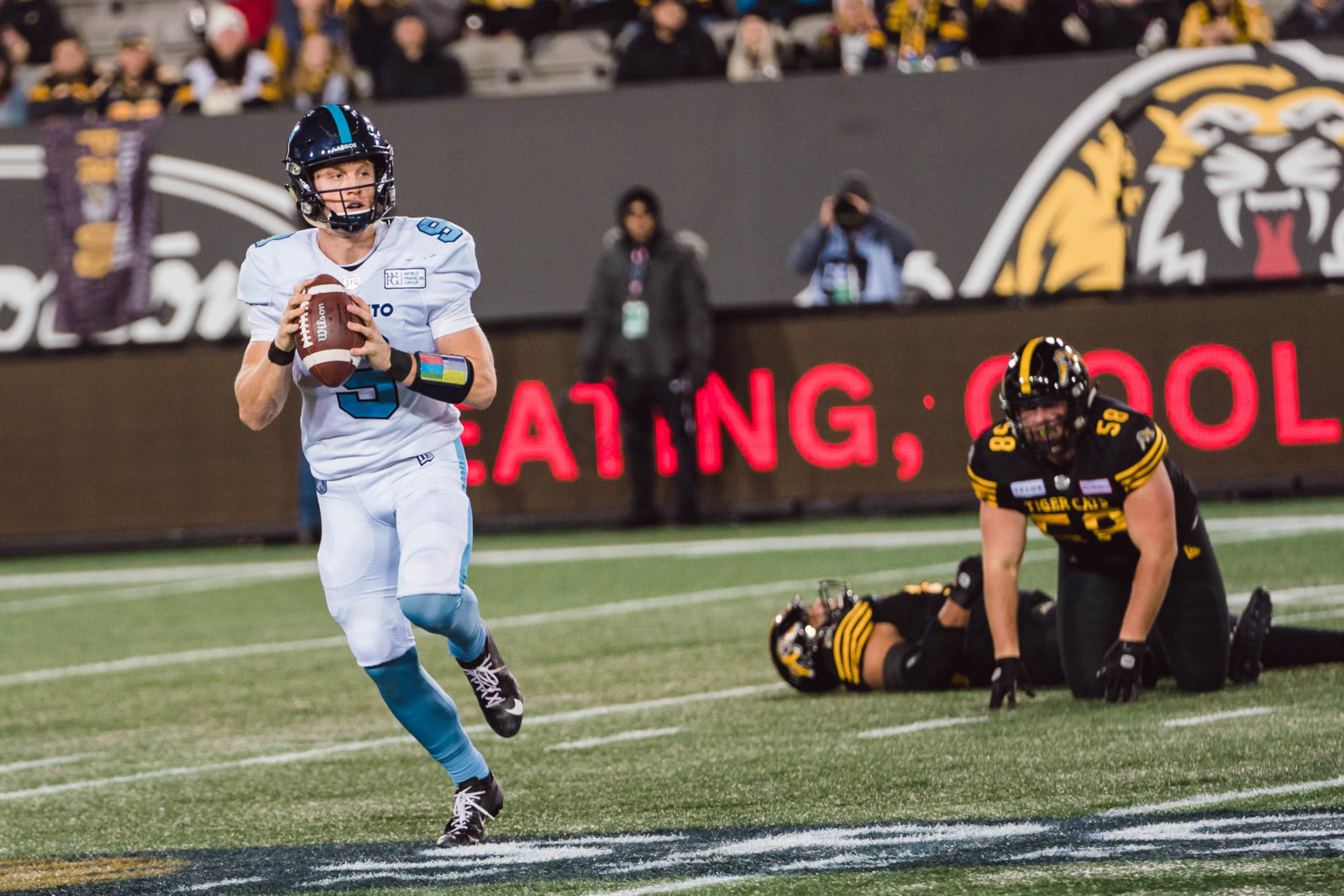 HAMILTON — Lirim Hajrullahu kicked a game-winning 40-yard field in the final seconds to lead the Hamilton Tiger-Cats past the Toronto Argonauts with a 21-18 home win on Saturday night. The playoff-bound Ticats improve to 15-3 and finish the season with a perfect 9-0 record at home.

An 89-yard pick-six from Shaquille Richardson put Toronto on top early, but a touchdown run from Cameron Marshall and a field goal gave Hamilton the lead in the second. A 75-yard touchdown pass from Dakota Prukop to Rodney Smith restored the Argos’ lead, but Marshall’s second touchdown run of the half took the lead right back. Toronto added a field goal and a single to make it a 17-17 game entering half-time.

Cameron Marshall racked up a game-high 109 rushing yards on 18 carries for his best performance of the season.

Prukop completed four of nine passes for 118 yards and a touchdown for Toronto, and Armanti Edwards surpassed 1,000 receiving yards in a season for the first time.

Canadian quarterback Michael O’Connor threw for 112 yards while completing 10 of 16 passes for the Argos.

Hayden Moore got the start at quarterback for Hamilton, but the rookie passer was the victim of a pick-six on Hamilton’s opening drive when Richardson picked him off and returned the interception for an 89-yard touchdown down the right sideline. Moore was attempting to complete a pass to rookie receiver Jaelon Acklin when Richardson jumped the route for the defensive touchdown. Zack Medeiros missed the extra point, leaving Toronto with only a six-point lead.

The Argos’ defence forced another turnover on the very next drive, as defensive back Qudarius Ford ripped the ball out of Jalin Marshall’s hands for the fumble. Ford also recovered the fumble to set up the offence near midfield, but Toronto was unable to convert the turnover into points.

The Ticats then put together a solid drive that saw a 24-yard catch from Luke Tasker and a 10-yard run from Cameron Marshall move the offence into the red zone. Toronto appeared to come up with another takeaway a couple plays later when Alden Darby picked Moore off in the end zone, but the play was overturned due to an illegal contact penalty on Richardson.

The penalty set up first-and-goal, and the Ticats capitalized by taking the lead with a five-yard touchdown run from Cameron Marshall. Hajrullahu kicked the extra point to give Hamilton a one-point lead entering the second quarter.

Hamilton caught the Argos off guard early in the second with an onside punt from Hajrullahu. Ford initially caught the kick for Toronto, but Valentin Gnahoua immediately forced a fumble which was quickly recovered by Hamilton’s Justin Tuggle at the Argos’ 20-yard line. But Toronto’s defence forced back-to-back incompletions from Moore, and Hamilton opted to settled for a 28-yard field goal from Hajrullahu to extend the lead.

Toronto answered back on offence with a lightning-quick, one-play scoring drive that saw Prukop throw a go-ahead touchdown to Smith. Prukop stepped up to evade pressure from a pair of Hamilton pass rushers before firing a pass to Smith for a 75-yard touchdown. Medeiros’ extra point gave the Argos a three-point lead.

The back and forth affair continued on the next drive when the Tabbies marched down the field to retake the lead once again. A 14-yard catch-and run from Jalin Marshall got things started, and a 20-yard run from Cameron Marshall brought the offence into Toronto territory. An Argos penalty brought the ball closer, and Cameron Marshall capped the drive off with an 11-yard touchdown run. Hajrullahu added the extra point to give Hamilton a 17-13 lead.

Toronto inched closer after a pair of first-down gains from Armanti Edwards led to a 41-yard field goal from Medeiros. The Argos then came up with another turnover in the final minutes before half-time when Linden Gaydosh intercepted a pass from Moore that was deflected at the line of scrimmage. Medeiros attempted to put Toronto back on top with a 42-yard field goal, but the kick went wide and out of bounds for a single to tie the game.

The Ticats appeared to be on their way to taking the lead in the third quarter after four straight completions from Moore set the offence up inside the Argos’ 10-yard line. But Darby shut the drive down by intercepting Moore in the end zone.

A 29-yard galloping run from Cameron Marshall and a 36-yard pass from David Watford to rookie receiver David Ungerer had Hamilton driving down the field in the fourth quarter. But the Argos’ defence held strong near midfield to force a punt. The ensuing 57-yard punt from Hajrullahu ended up being downed in the end zone with Toronto being forced to concede a single, putting Hamilton on top by a point.

The game was tied once again when a 22-yard field goal attempt from Medeiros went wide and resulted in another single for the Argos.

The winner of next week’s Eastern Semi-Final between the Montreal Alouettes and Edmonton Eskimos will face the Hamilton Tiger-Cats on the road in the Eastern Final on Sunday, November 17th at 1:00 p.m. (EDT).