Recap – Argos fall in back and forth affair in Montreal 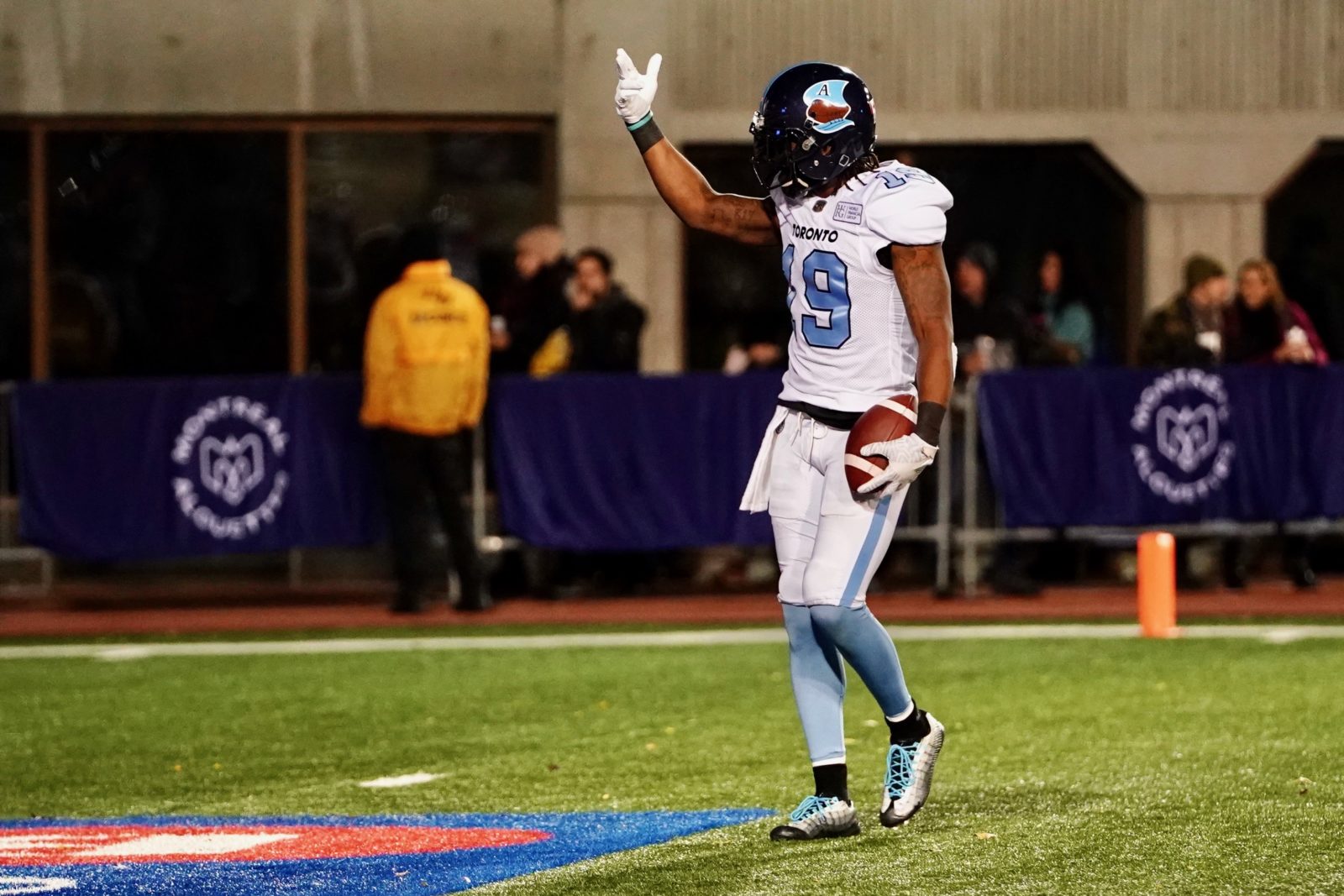 Recap – Argos fall in back and forth affair in Montreal

MONTREAL — The Montreal Alouettes scored a pair of fourth-quarter touchdowns and survived a late comeback attempt to claim a 27-24 home win over the Toronto Argonauts on Friday night. The playoff-bound Als recorded their 300th win in franchise history, improving to a 9-7 record with two games remaining.

Vernon Adams Jr. led the Als to a field goal on their opening drive and a touchdown to start the second quarter. Both teams traded field goals later in the half, giving Montreal a 13-3 lead entering the third quarter.

The Argos gained ground in the third quarter when a big catch from Chandler Worthy set up McLeod Bethel-Thompson’s first rushing touchdown of the season. Toronto grabbed the lead later in the third when Bethel-Thompson engineered an 83-yard drive that he capped off with a touchdown pass to S.J. Green.

The Als regained the lead in the fourth quarter on a quick scoring drive that saw Jeremiah Johnson reach the end zone on a 45-yard catch-and-run, and Montreal extended the lead on an 18-yard touchdown pass from Adams to Quan Bray.

Bethel-Thompson drove the Argos down the field for a touchdown in the final two minutes to make it a three-point game, but the comeback attempt fell short when a 51-yard field goal attempt from Tyler Crapigna missed as time expired.

Als running back William Stanback made his return from injury and reached the 1,000 yard rushing milestone for the first time in his career. Stanback is now second in the league with 1,003 rushing yards on the season, trailing only Andrew Harris.

Bethel-Thompson completed 78 per cent of his passes and surpassed 300 passing yards for the ninth time this season.

Adams converted on an early second down during the Als’ opening drive when he displayed beautiful touch on a 44-yard pass to DeVier Posey. But the drive stalled due to an offside penalty, forcing Montreal to settle for a 36-yard field goal from Boris Bede.

Adams then led the Als to their first touchdown of the game by executing a 10-play, 92-yard drive. The Montreal quarterback moved the chains three times with his arm before finishing the drive off with a 10-yard touchdown pass to Posey. Bede added the extra point to give the Als a 10-point lead early in the second quarter.

The Argos responded by breaking the shutout on the next drive, as Crapigna nailed a 41-yard field goal to cut into the lead. Green helped set up the field goal with an eight-yard grab that extended the drive on second down.

A big 32-yard pass from Bethel-Thompson to Worthy gave Toronto a sudden momentum boost with just over a minute to go in the half, with Worthy stretching out to make the over-the-shoulder grab along the sideline. But a key sack later in the drive from defensive end Antonio Simmons pushed the Argos back and forced a field goal attempt, and the Als managed to block the 50-yard attempt from Crapigna to end the half.

Worthy came up with another highlight-reel grab in the third quarter. The Argos receiver dove out and made a spectacular 29-yard catch that set up a first-and-goal situation at the one-yard line, and Bethel-Thompson punched it in on the next play for the touchdown. Crapigna knocked the extra point through to cut Montreal’s lead down to three points.

Toronto came up with big a defensive stop, and the Argos began driving again on offence. Bethel-Thompson took advantage of a blown coverage by finding Rodney Smith down the field for a 34-yard gain, and the quarterback followed it up with a 14-yard pass to Green.

Bethel-Thompson capped the drive off with a quick five-yard touchdown strike to Green on a slant route, and Crapigna’s extra point gave the Argos a 17-13 lead with three minutes to go in the third.

Montreal pass rusher Javon Rolland-Jones came up with a huge sack that forced a punt in the fourth quarter. The Als’ offence did not waste time capitalizing on the opportunity, driving down the field to regain the lead in just two plays. Adams connected with Jake Wieneke for a 21-yard gain, and Johnson followed it up with a 45-yard catch-and-run touchdown on the next play. Bede kicked the extra point to give Montreal a three-point lead.

After coming up with another stop on defence, the Als proceeded to storm down the field with hopes of an insurance score. Adams extended the drive on second down with an electric 28-yard run, and he threw an 18-yard touchdown pass across the middle of the end zone to Quan Bray on the next play. Bede kicked the convert to make it a 10-point game with just under four minutes remaining.

Toronto kept things interesting with a late drive in the final minutes. Bethel-Thompson led the Argos down the field on a quick 60-yard drive that ended with a two-yard touchdown toss to Worthy. Crapigna made the extra point to cut Montreal’s lead back down to just three points with just over a minute to go.

But the Argos’ comeback hopes faded on the final drive of the game when Crapigna’s 51-yard field goal try fell short.

Both teams will be in action again next Saturday, with the Montreal Alouettes hosting the East-leading Hamilton Tiger-Cats at 1:00 p.m. EDT. and the Toronto Argonauts hosting the Ottawa REDBLACKS at 4:00 p.m. EDT.