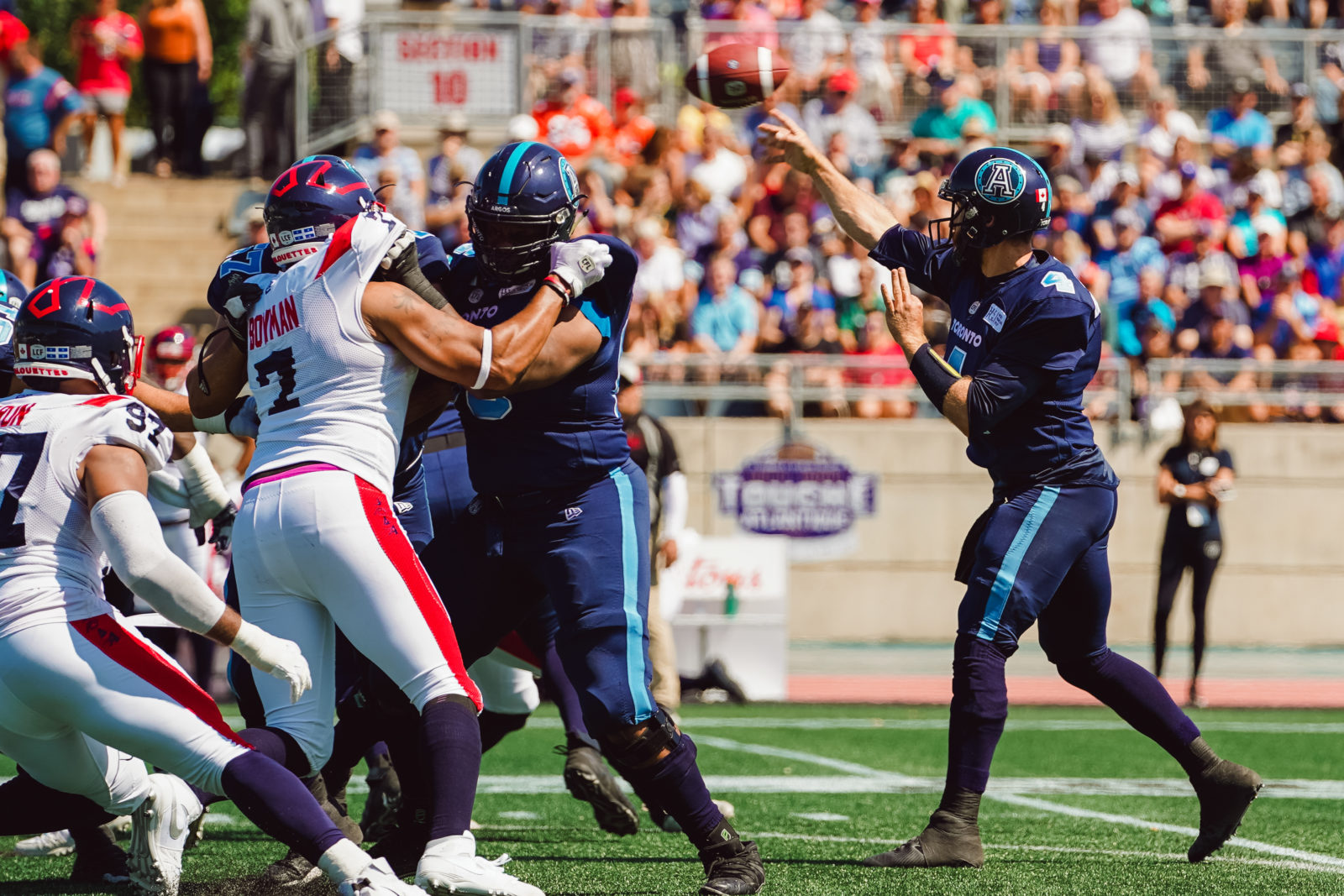 Here are the lineup changes for the Argos for their Friday night game in Montreal. Remember, these are the starting lineups and player movement is constant during the game.

McLeod Bethel-Thompson gets the start at quarterback. In last week’s 28-21 win over Ottawa he threw for an even 300 yards and a pair of touchdowns. The depth chart remains the same at QB, with James Franklin, Dakota Prukop and Mike O’Connor also listed.

A new running back is scheduled to make his Double Blue debut on Friday. A.J. Ouellette is a graduate of Ohio University, who signed with the Saints after this year’s NFL draft, then attended the Browns training camp before signing with the Argos. He’s listed behind James Wilder Jr. and Chris Rainey, while the fullbacks are Declan Cross and Regis Cibasu, who grew up in Montreal and attended Universite de Montreal.

There’s a significant change at receiver, as Derel Walker has been placed on the one-game injured list. Chandler Worthy has been activated and will start in his place. The rest of the receiving corps is intact, as S.J. Green, Armanti Edwards, Rod Smith, and Jimmy Ralph will start. The reserves are Kurleigh Gittens Jr., Llevi Noel and Alex Charette. Green joined the 10,000-yard club last week, just the 18th receiver in CFL history to reach that milestone.

The offensive line will remain the same, with Sean McEwen at centre, Tyler Holmes and Ryan Bomben at guard, at Randy Richards and Jamal Campbell at tackle. Shane Richards will also dress. 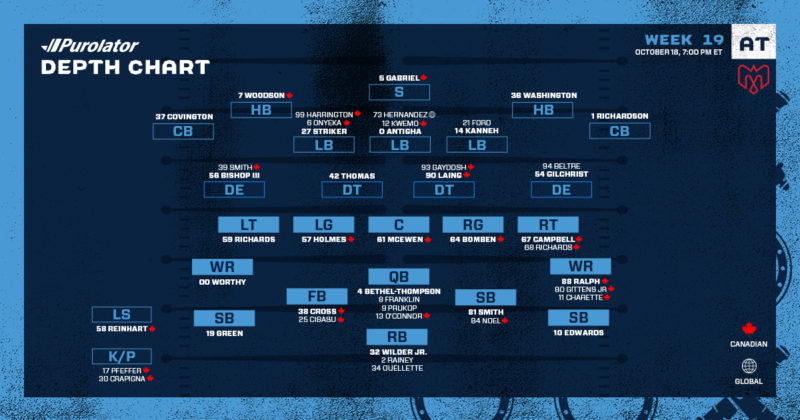 There are a couple of changes on the defensive line. Kingley Opara is out, with Jhaustin Thomas getting the start at tackle beside Cleyon Laing. Linden Gaydosh will rotate at tackle. The starting ends will be Kennan Gilchrist and Freddie Bishop III, while Frank Beltre and Robbie Smith – back in the lineup after an injury – will be the backups.

It’s been a rarity this season, but the linebacking corps is intact for a second-consecutive week. Tobi Antigha, who had two interceptions last week, will start in the middle. He’ll be flanked by Eric Striker on the weak side, and Abdul Kanneh on the strong side. The backups will be Qudarius Ford, Sean Harrington, Global player Christian Hernandez, Nakas Onyeka, and Montreal native Nelkas Kwemo.

Former Calgary Stampeder Shaquille Richardson will make his Argo debut at field corner. He most recently played in the AAF. Anthony Covington will again be the boundary corner. New dad Robert Woodson moves from field corner to the boundary halfback spot, with Trumaine Washington back as the field halfback. Jermaine Gabriel starts at safety for the injured Alden Darby Jr., who has been added to the one-game injured list.

Longsnapper Jake Reinhart is playing in his 100th CFL game this week. Tyler Crapigna is the placekicker, while Ronnie Pfeffer is the punter.