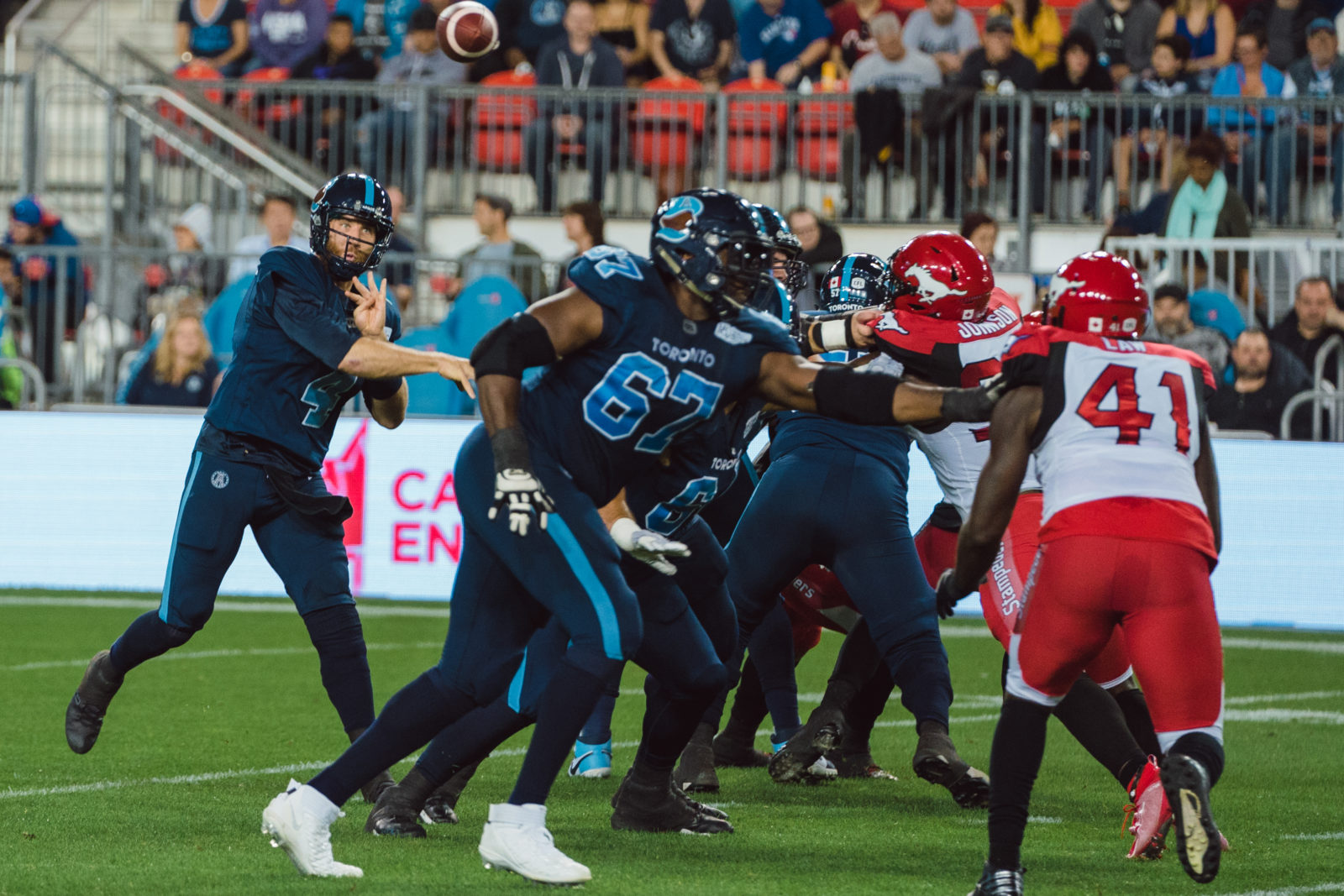 TORONTO — A dominant first half by the Calgary Stampeders was the difference, as they came out with a 23-16 victory over the Toronto Argonauts on Friday night.

Calgary quarterback Bo Levi Mitchell finished the game 33 of 48 for 346 yards and a touchdown. A first-quarter scoring toss to Ka’Deem Carey and a 35-yard connection with Eric Rogers highlighted his evening of work.

Terry Williams led the way for the running backs, gaining 42 all-purpose yards. He opened the scoring with a 24-yard run in the first quarter.

Rogers hauled in six catches for 94 yards on the game. Josh Huff also finished with over 50 yards on four receptions.

The Calgary defence was able to get to the opposing quarterback on six occasions, with Mike Rose and Derek Wiggan nabbing two sacks apiece. Royce Metchie also hauled in an interception in the first half.

McLeod Bethel-Thompson completed 63 percent of his passes for 86 yards in the loss. He was replaced by James Franklin in the third quarter, and the backup finished with 147 yards and a touchdown on 12 of 16 passing. 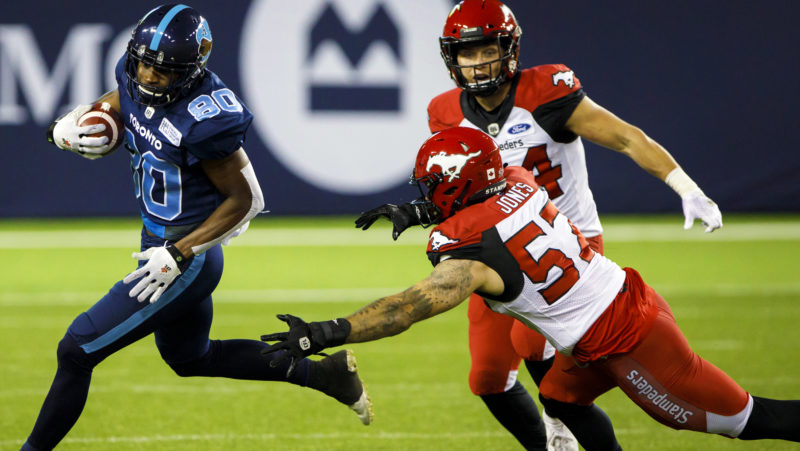 The first scoring drive of the contest would come with just over seven minutes to go in the opening frame. Mitchell covered 68 yards in just four plays, starting the drive off with a pair of completions to Colton Hunchak and Aaron Peck for gains of 8 and 13 yards, respectively. An Abdul Kanneh penalty for a horse-collar tackle on Peck would tack on another 15 yards, setting the Stamps up at the opposing 32-yard line. Following another 8-yard connection with Hunchak, Williams would make good on his opening rush of the contest, breaking to the right and tip-toeing the sideline to scamper into the end zone from 24 yards out. Rene Paredes would give the visitors an early 7-0 lead with the point-after.

Bethel-Thompson would look to answer right back with a scoring drive of his own, but while trying to find Rodney Smith down the left sideline, Royce Metchie would get his hands on the ball and toe-tap in bounds for his second interception of the campaign. The Stamps’ offence would immediately convert the turnover into points.

Mitchell found Rogers over the middle, and the receiver turned upfield and made a few defenders missed. After Kennan Gilchrist dragged him down, it stood as a gain of 35, with 23 of those coming after the catch. Hunchak would pick up another 12 on his third reception of the evening before a short pass for Carey saw the running back have open field down the right side. He’d double the Calgary lead following the 11-yard catch and run — as well as Paredes’ second convert — to end the first quarter.

The second quarter would be more of the same for the double blue. They’d make some positive steps towards moving the ball downfield but were forced to punt by the Calgary defence.

The stamps would extend its lead further just two minutes into the second. A pair of Mitchell completions to Huff would see a total of 18 yards gained through the air, but Bear Woods would stuff Terry Williams at the line of scrimmage to force a field goal. Paredes would calmly knock a 42-yarder through the uprights, giving the Stamps a 17-point advantage.

Toronto would get some life following that score, however. A Ronnie Pfeffer punt pinned the Stamps inside their own 15, and on the first play of the drive, Mitchell’s dump pass over the line of scrimmage would be gobbled up by Gilchrist.

The Argos would be set up with the ball already in the red zone, but a sack by Rose on their opening play would push them back to the 20. They’d get that yardage back, as Bethel-Thompson would get the ball into the hands of James Wilder, who rumbled down the left sideline, hurdled Tre Roberson and was tackled at the 2-yard line. Instead of rolling the dice, the Argos opted to take the points. Tyler Crapigna blasted home a 9-yard field goal to get the hosts on the board.

Toronto attempted to go for it on third down with around 1:30 left in the half, but after coming up short, they’d give Calgary the ball at midfield. Mitchell had a 15-yard completion to Williams and another 19-yarder to Rogers but a pair of incompletions stalled the drive. Paredes’ second field goal of the contest — a 17-yarder — gave the Stamps a 20-3 lead heading into halftime.

To open the half, Calgary began to grind out the clock, with Mitchell using short-yardage passing the keep the drive going. They would kill off the opening 5:24 of the third, but Mitchell was picked off by Trumaine Washington just outside of the end zone as he was trying to find a streaking Rogers. The Argos wouldn’t be able to take advantage, however, as they’d go two-and-out.

After that, James Franklin would enter the game for the Argos, and he’d make an immediate impact. He’d air a ball out down the middle to catch a sliding Armanti Edwards, who’d get his hands underneath the ball for a gain of 45 yards. Another gain of seven on a short pass was all the offence could muster other than that. Crapigna would hit a 36-yard field goal and cut the Calgary lead to 14 going into the final frame.

The teams would trade field goals in the fourth quarter, with Paredes hitting a 15-yarder and Crapigna answering with a 35-yard kick of his own. The Argos would add a late score when Franklin found Derel Walker streaking through the middle, but the Stamps would run out the remainder of the clock to secure a 23-16 road win.

With the victory, the Stampeders have won their last four games. They’ll have Week 16 off before returning to action against the Montreal Alouettes on Oct. 5. The Boatmen will welcome the Saskatchewan Roughriders to BMO Field in their next game on Sept. 28.