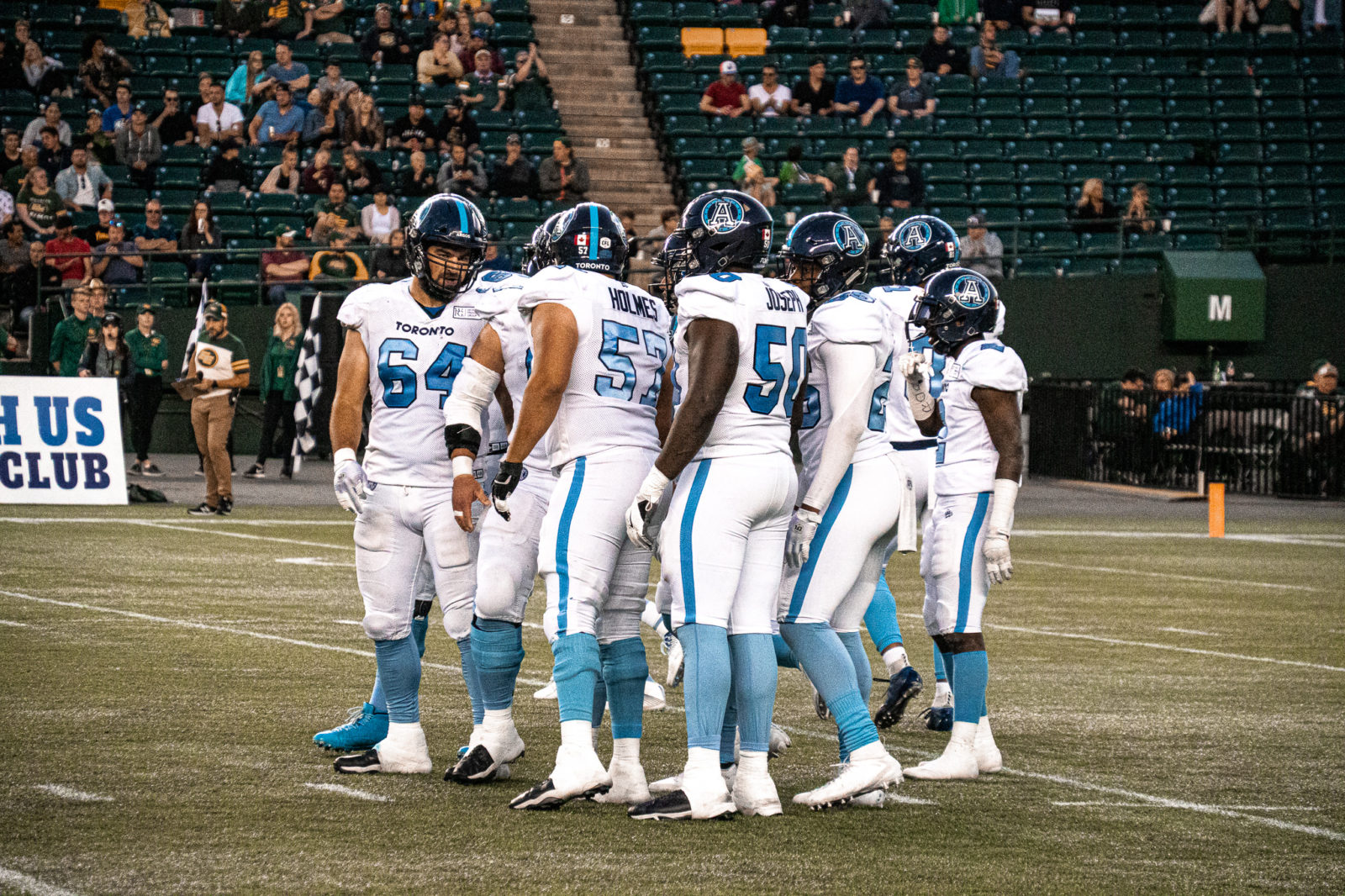 EDMONTON — The offensive woes continue to plague the Toronto Argonauts as they remain without a win through six games after being iced by the Edmonton Eskimos 26-0 Thursday night at The Brick Field at Commonwealth Stadium.

With the win, the Esks move to 4-2 on the season, tied with their cross-province rival Stamps for second in the West Division. The Argos sit at the bottom of the East Division standings after being handed their first shutout since 2009.

Having gone two games this season without passing for a touchdown and losing both of those games ahead of Week 7, Trevor Harris managed to do enough for the Eskimos with his 298 yards through the air off of 27 of 39 passing without needing to pass for a major in Edmonton’s winning effort.

Despite an opening drive that had the Eskimos progress deep into the Argos’ end of the field, Harris couldn’t cap off the drive — having a pass attempt escape him over the middle of the field and into the hands of Toronto’s Justin Herdman.

Head Coach Jason Maas challenged the play, having it overturned and giving Edmonton the ball on the 2-yard line. However, a Cooper fumble would make it all for naught on the ensuing play, coughing the ball up back into the hands of the Argonauts.

A week after coughing up seven turnovers against the Stampeders, the Double Blue handed over the ball on five occasions Thursday night.

The Eskimos were sure to make this time around stand for something. Following a touchdown that was called back and a pass interference call against Toronto, Harris was able to plunge his way in from a yard out to break the ice and put the Esks ahead.

In the second quarter, the Eskimos’ defence continued their pressure on the Argos’ quarterback while the offence of the Green and Gold were able to put themselves in position to allow Sean Whyte to chip in a pair of field goals, one from 21 and 47 yards, giving Edmonton a 13-0 lead.

A designed swing play resulted in a fumble by the Eskimos after what looked like an incompletion counted as a lateral. The Argos defence was able to scoop up the loose ball, giving their offence some signs of life in the final moments of the half.

Despite some forward progress moving into scoring range, Bethel-Thompson was unable to find room to breathe, turning the ball over back to Edmonton after a fumble off of contact.

The teams made their way to the locker rooms with Edmonton maintaining a 13-0 lead, holding the Double Blue to just 119 yards on offence.

Toronto hoped to spark some new energy into their offence, electing to start Dakota Prukop in the second half after Bethel-Thompson completed just five of 13 pass attempts for 83 yards in the first half. At the end of the day, he’d complete just six of 18 attempts for 90 yards.

Even with a new quarterback behind centre, the Eskimos defence wasn’t phased one bit, forcing a quick third down to get their offence the ball.

Replacing an injured C.J. Gable as the Esks’ starter out of the backfield, Shaquille Cooper crossed the goal line in the third quarter for his first CFL touchdown off of a 4-yard dash. Cooper kept himself involved in the Eskimos’ offence for the night, racking up 128 yards on the ground and 48 yards through the air.

The ensuing drive by the Argos, the struggles continued as Prukop threw his first career interception into the hands of Jordan Hoover.

At the start of the fourth quarter, the Argonauts reverted back to their original signal-caller, giving Bethel-Thompson the nod once again to manage the huddle. Changes at quarterback wouldn’t solve the team’s offensive woes though as they would go on to commit a third-down turnover on their quarter-opening drive.

Whyte would add one more boot to his stat line before the day was out, splitting the uprights from 37 yards out, his third field goal of the game.

Prukop replaced Bethel-Thompson on the following offensive drive by the Argos, marking the third time Toronto changed their signal-caller during the game.

Prukop would throw eight of 13 for 68 yards and two interceptions in his time spent behind centre.

Whyte put the game on ice with his fourth field goal of the game, capping the 26-0 victory.

Up next for the winless Toronto Argonauts will be a trip to Winnipeg next Thursday to see if they can right their ship against the Blue Bombers. As for the Eskimos, they’ll be up in the season’s first installment of the Battle of Alberta when they square off against the Calgary Stampeders next Saturday.