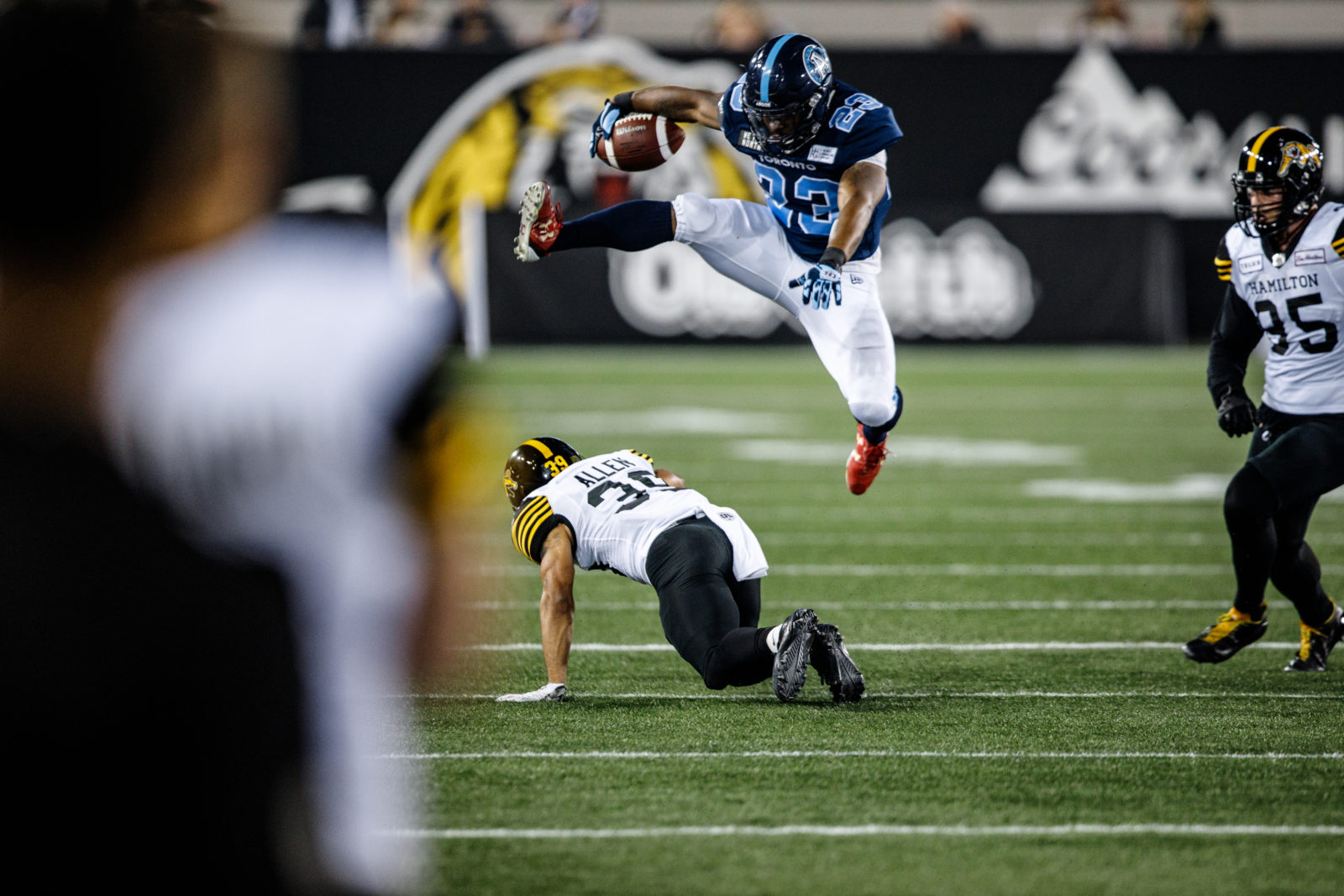 HAMILTON — McCleod Bethel-Thompson threw for 222 yards and a touchdown in one half of football as the Toronto Argonauts ended the pre-season with a 30-23 win over the Hamilton Tiger-Cats.

Bethel-Thompson got the start for the Boatmen after seeing time in the second quarter last week vs. Montreal and made the most of his time with James Franklin on the bench.  He and newcomer Derel Walker combined for 132 yards on three completions to aide the Argos in the win.

After resting the majority of their starting offence a week ago in their pre-season opening win in Ottawa, the Ticats began this game with their entire no. 1 unit.  With QB Jeremiah Masoli at the helm, the Tiger-Cats offence looked sharp as he completed passes to Luke Tasker, Jaelon Acklin and Brandon Banks before spotting a wide open Braylon Addison in the endzone for an 11-yard touchdown against what is likely to be the Argos starting defence.

Toronto countered with Bethel-Thompson under centre alongside the Argos’ starting offence.  Although Bethel-Thompson saw action last week against Montreal he entered the game after Franklin who got the start.

Thompson also looked solid out of the gate, driving the Argos deep into Hamilton territory before setting up a 19-yard Drew Brown field goal.  Bethel-Thompson was the beneficiary of a 45-yard catch-and-run by Walker who is the newest weapon in the Toronto receiving corps after signing as a free agent. 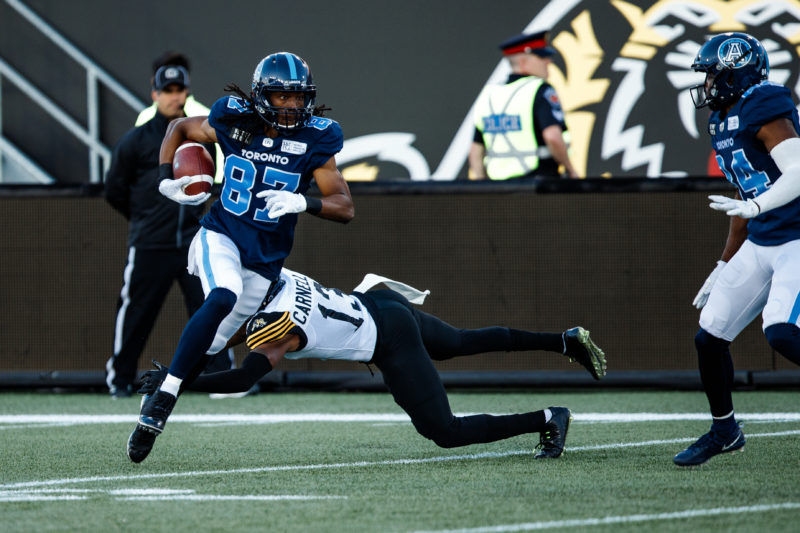 With the Tiger-Cats up 7-3 and the first quarter ticking down, Bethel-Thompson put together his second straight impressive drive, finding Armanti Edwards and SJ Green for first downs before putting the ball in the hands of James Wilder Jr. who took a three-yard handoff to the house.  The major gave the Argos their first lead of the game at 10-7.

The Ticats would cut into the lead with a quick field goal before taking a 17-11 advantage with 4:35 left in the quarter on a Masoli one-yard QB run working off a short field.

The touchdown drive was aided by an interception when the ‘Cats snuffed out a screen pass intended for Walker from QB Michael O’Connor.  The Canadian pivot was throwing just his second pass of the game after spelling Bethel-Thompson midway through the second frame.

On the ensuing kickoff, the Ticats recovered an onside kick which set up a field goal to quickly add on to the lead, making it 20-11 just after the three-minute-warning.

As quick as the ‘Cats padded the lead, the Argos made a huge dent on the strength of Walker once again.  Bethel-Thompson re-entered the game and through a pass down the seam to the former Edmonton Eskimos receiver who was behind coverage and took the completion 75 yards for the touchdown.

The third-year Argos pivot would close out the half with another scoring drive, completing passes to Wilder, Green and Llevi Noel to set up  a 15-yard field goal to tie the game at 20.

Bethel-Thompson ended his day with a productive 11 of 17 for 222 yards passing and one touchdown in a half of work.  Masoli completed 17 of 26 passes for 154 yards and threw both a touchdown and interception.

As the teams took the field for the second half, the Argos went with Brandon Bridge under centre while the ‘Cats countered with Dane Evans.

Evans led the way in the first half of last week’s win in Ottawa by putting together multiple scoring drives and completing 11 of 14 passes for 96 yards.

Evans picked up where he left off last week, putting together a solid drive resulting in a field goal on his first possession.

As for Bridge, he did not do much with the short time he was afforded in the third quarter, going 4 for 8 for 40 yards and an interception.  He was replaced by Dakota Prukop when the fourth quarter began. 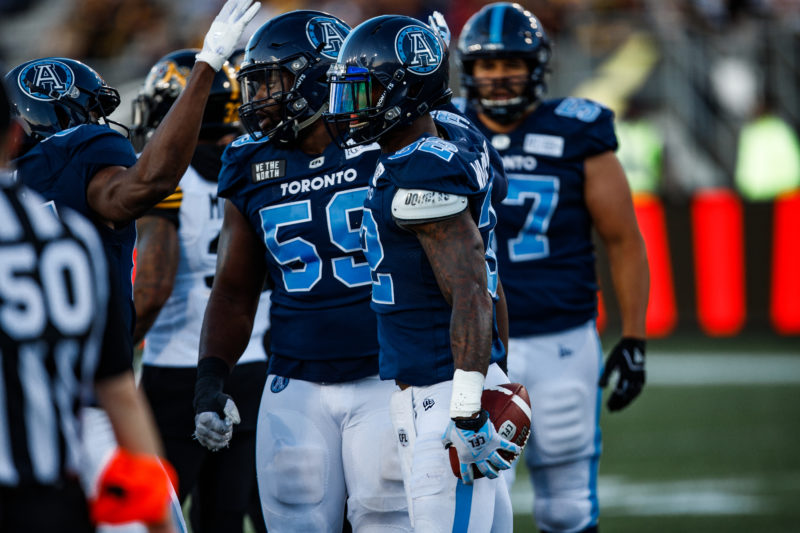 Prukop, who has sat at the end of the Argos QB depth chart for a pair of seasons, made a case for himself when he unloaded on a 43-yard pass to WR Cole Watson who made a phenomenal diving catch to give the Argos a 27-23 advantage with just under eight minutes remaining.

The Ticats would follow Evans’ performance by inserting Hayden Morre at quarterback.

On their next possession, the Argonauts would chew up more yards and more clock following the three-minute warning.  Tailback Brandon Burks ripped off a pair of big runs totalling 33 yards to set up a short field goal to extend the Argos lead to seven.

The Argonauts will make their final cuts on Saturday before taking a bye week to prepare for their season opener vs Hamilton in Week 2.

As for the Tiger-Cats, they will kickoff the 2019 CFL regular season when they host the Saskatchewan Roughriders next Thursday.