Terry Greer: Finally, The Kid Is In The Hall 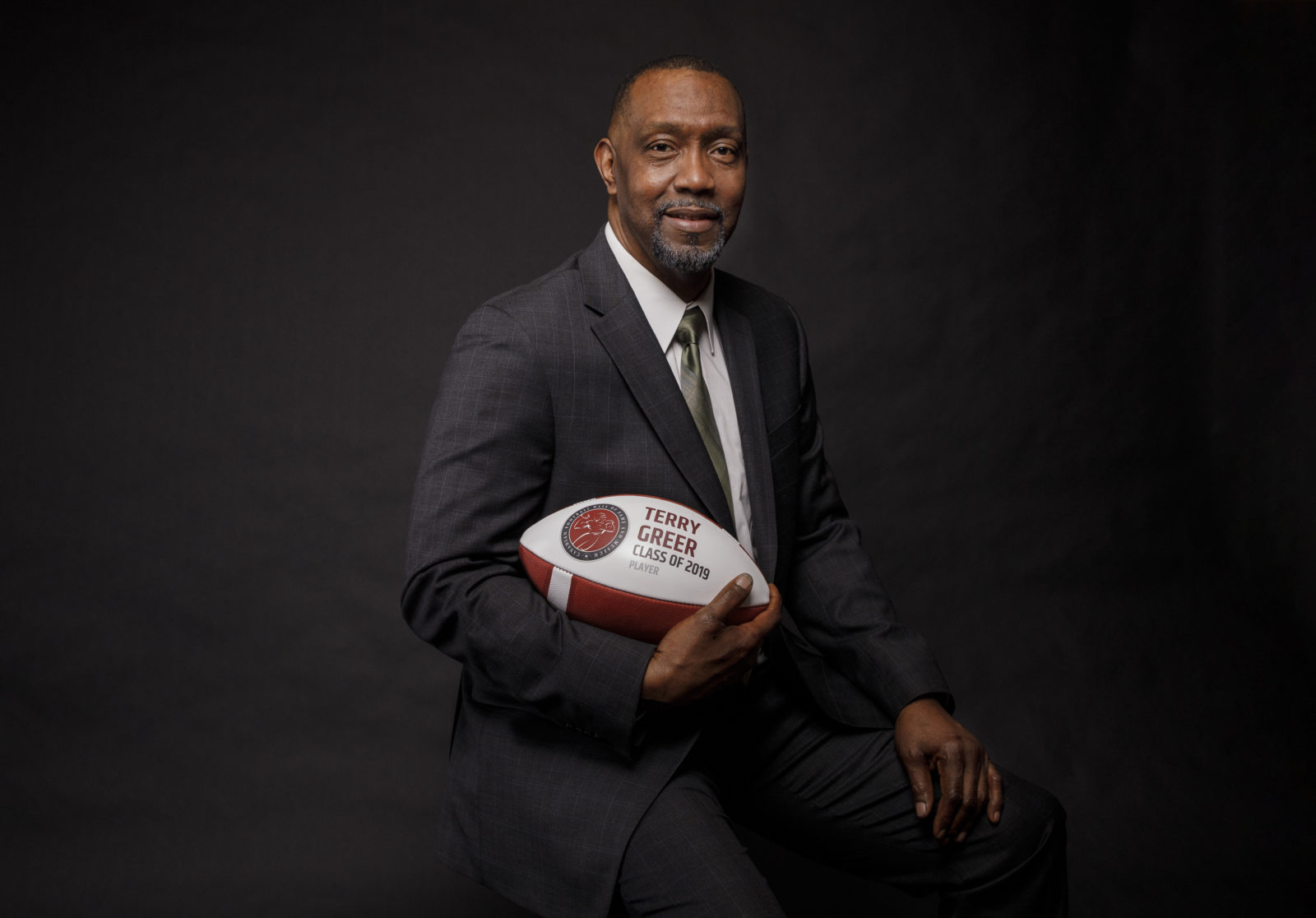 Terry Greer: Finally, The Kid Is In The Hall

TERRY GREER: FINALLY, THE KID IS IN THE HALL

For the last three decades there was usually just one reply when someone mentioned that Terry Greer was not in the Hall of Fame.

“What do you mean he’s not in the Hall?”

That major oversight has finally been rectified, as on Wednesday at BMO Field – just steps from the site of CNE Stadium where he starred as a receiver for the Toronto Argonauts – Greer was announced as a member of the 2019 Class that will be inducted into the Canadian Football Hall of Fame.

He was at home when he got the call from CFHOF Executive Director Mark DeNobile.

“I was in bed,” recalled Greer in a conversation with Argonauts.ca. “The phone rang. I didn’t recognize who it was and looked at the number and said ‘that’s out of Canada’ and I debated whether I should answer the phone or not.”

He did, which was a very good thing.

“I got it and heard ‘Hi Terry, this is Mark DeNobile from the Canadian Football Hall of Fame’ and I asked ‘Who got in?’” he continued. “I started going through my mind which guy they wanted to interview me about. It had been so long I wasn’t thinking it was me.”

The good news was about to be delivered.

“He said ‘Congratulations, you’ve been selected this year, Class of 2019’ and I was very excited.” said Greer, who hadn’t given up on the hope of one day receiving that call.

As a member of the Hall of Fame, Greer will once again be a teammate of quarterback Condredge Holloway, inducted himself in 1999. He had one question about his receiver getting the call to the Hall.

“What the hell have they been waiting on?” he said. “This is way overdue.”

While Greer also had success with Joe Barnes at QB, there was something special about the Holloway-to-Greer combination. The University of Tennessee legend explained to Argonauts.ca why the man who wore number 10 was such a dangerous receiver.

“He was a one-on-one nightmare,” Holloway recalled. “He was big, fast, caught the ball well and ran great routes. DB’s don’t like that because it makes their job really hard (laughs).”

Greer put up numbers in his first two seasons that were pedestrian at best. In 1982 his life as a pro would change when introduced to head coach Bob O’Billovich, offensive coordinator Darrel “Mouse” Davis, and the run-and-shoot offence.

“When I first came to Toronto, Terry really hadn’t been utilized that much as a receiver,” explained the coach. “I didn’t know why. It didn’t take us long to figure out we should be throwing a lot of balls to Terry Greer.”

O’Billovich, a member of the 2015 Hall-of-Fame class, would change that. Greer had 37 catches in 14 games as a rookie, just 21 in six games in an injury filled second year.

Perhaps his most impressive stat was putting together three-consecutive games with over 200 receiving yards. That hasn’t been duplicated and may never be accomplished again.

It was a perfect marriage between offence and player.

“It was a new offence for me,” explained Greer. “It was tailor-made for me. Mouse talked to me and said ‘you’re going to love this system. You’re fast, you have good hands, it’s going to be great for you.”

Holloway benefitted not only from Greer’s ability, but the stubbornness of some defences, who refused to commit an extra defensive back to the star.

“I could not believe they covered him one-on-one,” remembered the QB. “I checked to him every time I could.”

Bob Bronk joined the Argos from Queen’s in 1982. The fullback remembers how Greer used to communicate to Holloway which route he was going to run, particularly evident in a 1983 game at Ottawa when Greer set the CFL record with 16 catches (still tied for the league mark) for 230 yards.

“Condredge would look to the left and right as to not signal who he was going to throw to,” Bronk continued, “The DB covering Terry guessed wrong every time. If he played bump and run, Terry would run a post. If he took away the inside shoulder he’d run an out. We literally ran the same play 80 percent of the time.  The next time we played Ottawa they double teamed Terry (laughs).”

“That was a part of our package,” Holloway said of Greer’s option. “With the run-and-shoot we had a ‘choice’ route. He would choose the route and signal me what he was going to run.”

It was a quarterback-receiver combination that the head coach grew to love very quickly due to the pair’s cohesion both on and off the field.

“We just had a feel for each other,” said the receiver. “He knew my body language. Also, if something broke down, I’d come back to him. I’d never give up on a route, even if I’m not the primary receiver I would always stay involved because Holloway would come back to me and would be looking my way.”

It was a relationship that was obvious to the head coach.

“I think that happens with a lot of quarterback-receiver combinations where they get comfortable with each other,” said O’Billovich. “I think some of the different types of passes that Condredge liked to throw, he was comfortable making those passes to Terry. Unless they double covered him, put a guy under him and another guy over the top, trying to cover him one-on-one was a big assignment that didn’t happen too often where it wasn’t in our favour.”

“You could never outthrow him,” added Bronk of Greer. “Seriously, when quarterbacks would throw, he always had another gear. He was such a great athlete.”

And soon to be a Hall of Famer, something that means a lot to Greer.

“It’s great,” said the man remembered by everyone interviewed for this article as being a superstar with zero ego. “It’s a lifetime achievement, and when I’m long gone that will still be there. I’m so honoured, it’s the greatest honour I’ve had individually.”