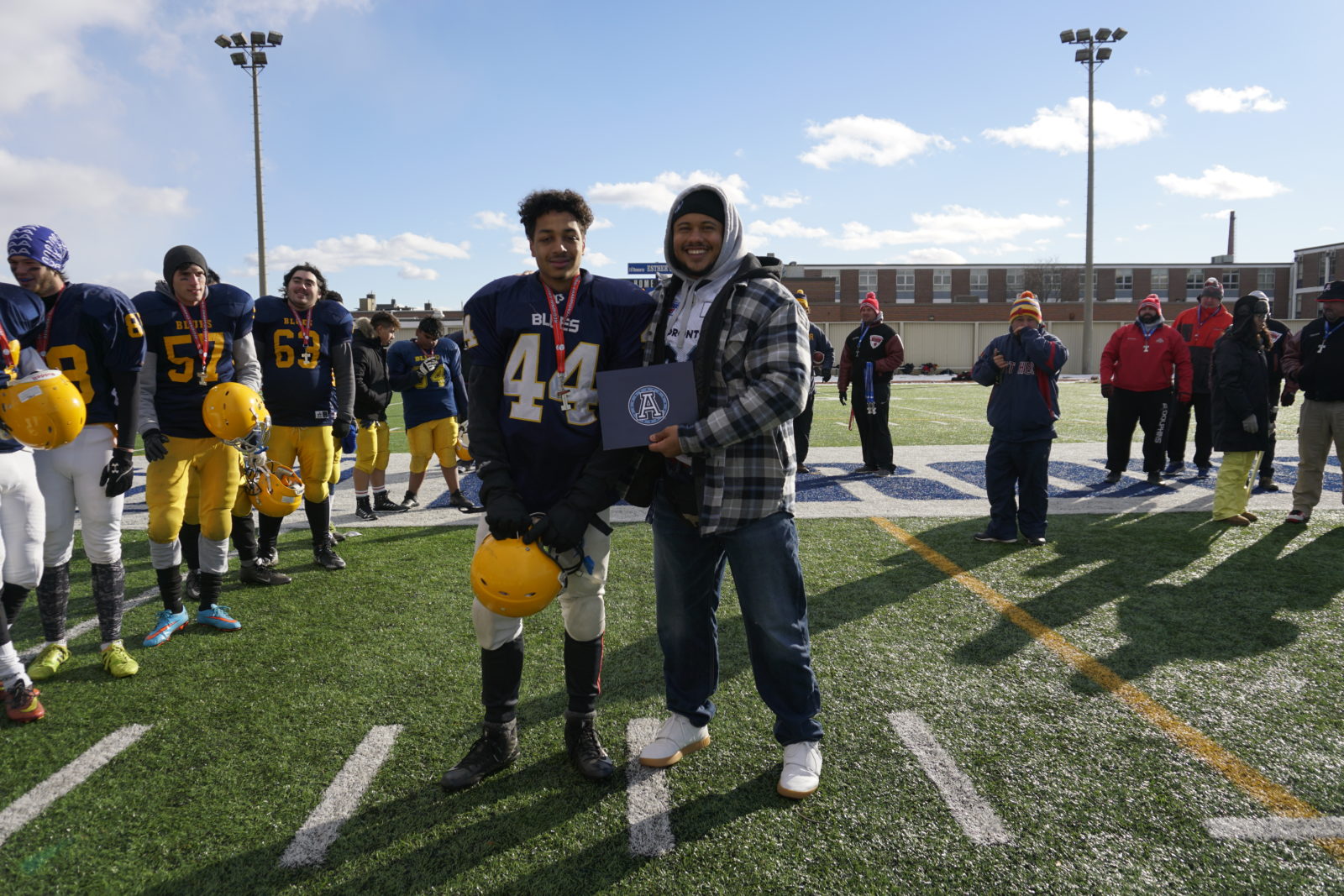 The Toronto Argonauts marriage to MLSE just celebrated its first anniversary. While the on-field honeymoon may have been a disappointment, much has been done off the field to ensure matrimonial success over the long term.

On Thursday the team announced a partnership with the Toronto Flag Football League, one that will see the Argo logo on the jersey of each participating player.

One of the driving forces behind increasing the team’s visibility in the GTA is Chris Shewfelt, the Argos Vice-President of Business Operations. He understands that the team has to be pro-active to engage new fans and sees getting involved at the grass-roots level as one great way to do that.

“This offers the opportunity to learn the fundamentals of the game; throwing, catching and running,” said Shewfelt. “It gives athletes the ability to learn plays on both sides of the ball in a fun, athletic and safe environment.”

This brand of football is near and dear to the heart of the Argos head coach, Corey Chamblin.

“We are proud to partner with the Toronto Flag Football League to play a leadership role in the growth of the game of football in the city and throughout the country,” said the coach via the news release. “Flag football has been a big part of my family’s lives as my sons play the sport and my wife and I both coach as well. I can attest firsthand to the benefits and positives that flag football has brought to my family and community.” 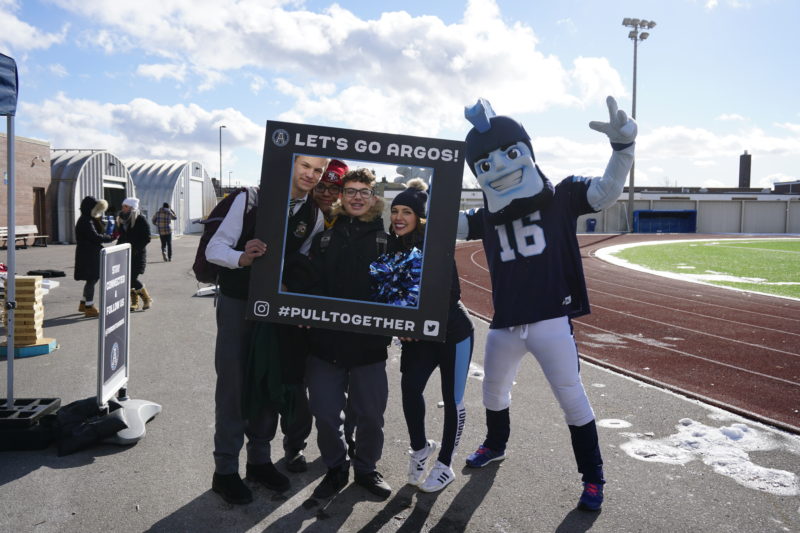 CFL Commissioner Randy Ambrosie was also happy about the Argos teaming up with the TFFL.

“This is an excellent initiative that encourages kids to get on the field and experience the great game of football,” said Ambrosie via the news release. “Flag football teaches teamwork, discipline and inclusion. It’s a great way to make friends and have fun. Congratulations to the Toronto Argonauts and the Toronto Flag Football League for working together to make it happen.”

This is all a part of the Argonauts off-season initiative to emphasize the game is fun, and not just for the people with one body type or coming from a certain economic situation.

“We celebrate the fact that football is one of the most inclusive sports in the world,” said Shewfelt. “It’s a sport that happily accepts players with any shape or size, or from any background.”

Put it this way, when you look at the Argos offence this season you’ll see Chris Van Zeyl in the huddle standing next to Chris Rainey. Van Zeyl is 6’6”, 312 pounds, while Rainey is 5’8”, 180 pounds.

Both athletes are not only able to play, but excel at the sport. 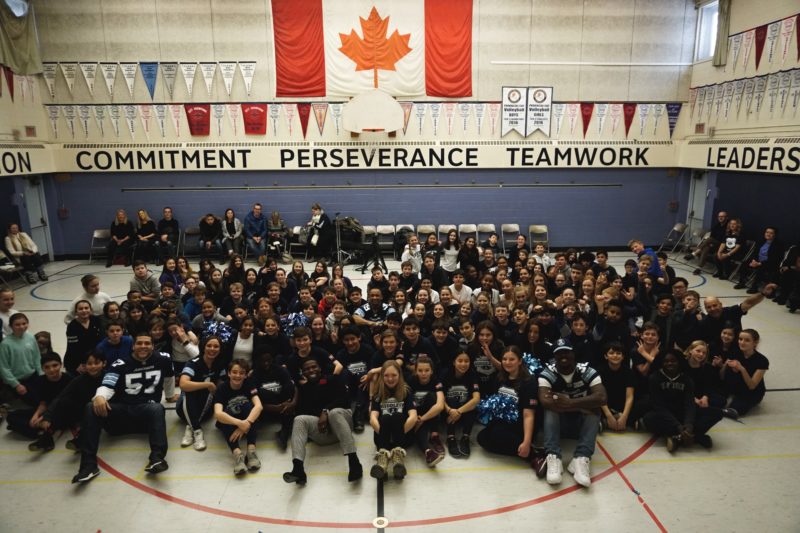 That’s the point made by the Argos “Huddle Up” program, now in its 18th season. The brainchild of Jason Colero, the team’s Director of Education and Community Programs, the initiative has preached its anti-bullying message to over 600,000 GTA students, a staggering figure. According to Shewfelt, it’s a prime example of what the organization is trying to do.

“Huddle Up is the perfect conduit between the positive aspects of football and a societal problem that face many youths in today’s world,” he said.

As another part of the scholastic theme, the Argos will continue their sponsorship of the Toronto District Secondary School Athletic Association city championship finals.

Last year Declan Cross and Matt Black were there for the junior and senior contests, handing out Player of the Game awards. The Argo cheerleaders kept the crowd entertained, and there was an inflatable football toss area so fans could test their skill. 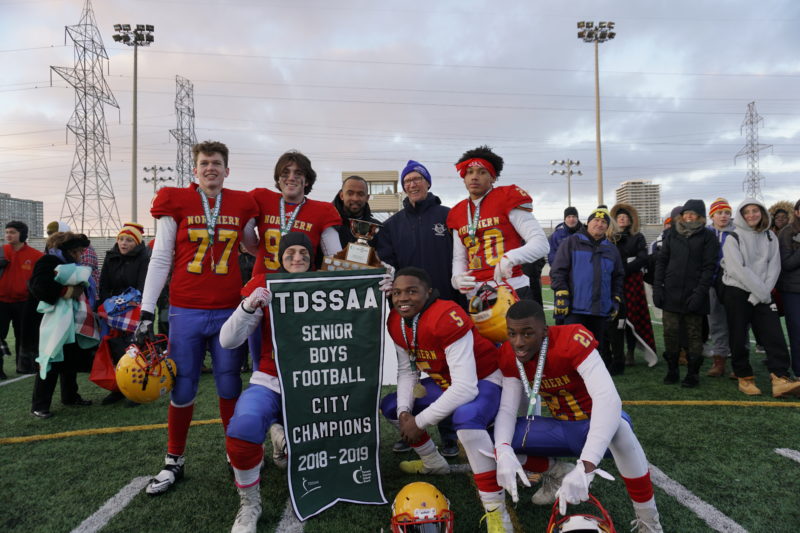 “It’s important that we continue our partnership with our school boards and high-school football teams,” said Shewfelt. “We want to continue to applaud the success stories coming out of our city’s football programs.”

Nine current Argos came through the Toronto or Brampton high-school systems, so there are on-field benefits too.

In the grand scheme of things, the team has just scratched the surface. There will be more announcements coming over the next few weeks, specifically aimed at attracting younger fans to the sport.

Football is fun, and that’s something that can’t be stressed often enough.