Hogan: How the Argos could line up on defence and special teams 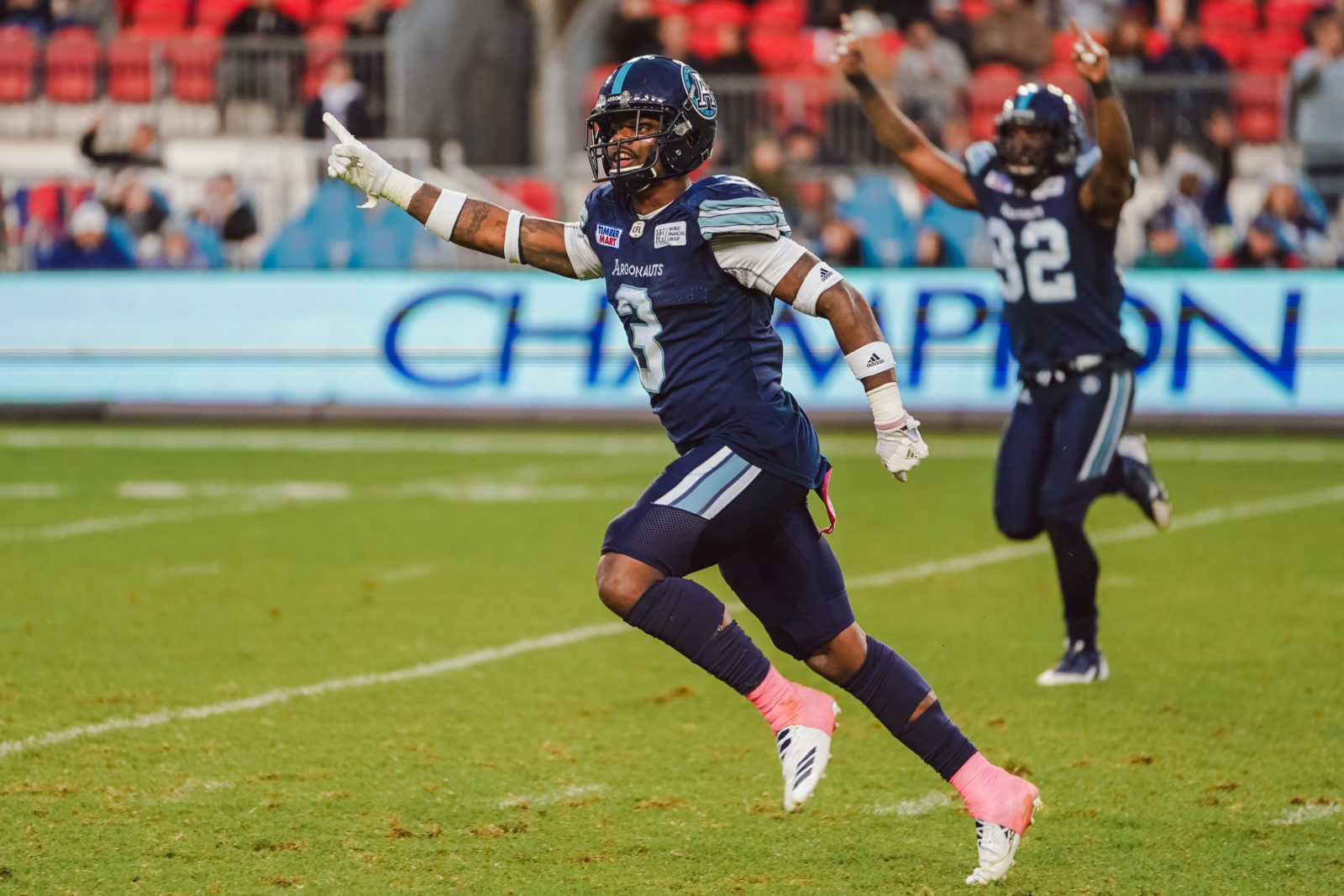 Hogan: How the Argos could line up on defence and special teams

Last week Argonauts.ca looked at how the offence might line up this season. Today, a look at the defence and the special teams.

There were very few positive takeaways from the 2018 Toronto Argonauts season. The offensive struggles were well documented, but the play on the defensive side of the ball was equally, if not more disappointing.

The man responsible for that championship defence has returned. Corey Chamblin has assumed the dual portfolio of Head Coach/Defensive Coordinator after a year at the University of Arkansas. Thanks to an aggressive free-agency period, Chamblin has a different group of athletes to work with, but will have to figure out not only who will play, but where those starters will line up.

Last year there was an obvious problem getting pressure off the edge. With a more aggressive scheme and two new ends added to the mix, that should be less problematic. Shawn Lemon returns to the fold after being traded to the B.C. Lions last July. The “Lemonator” collected a combined 11 sacks last season and is a pure pass rusher, adding that dimension to the lineup. 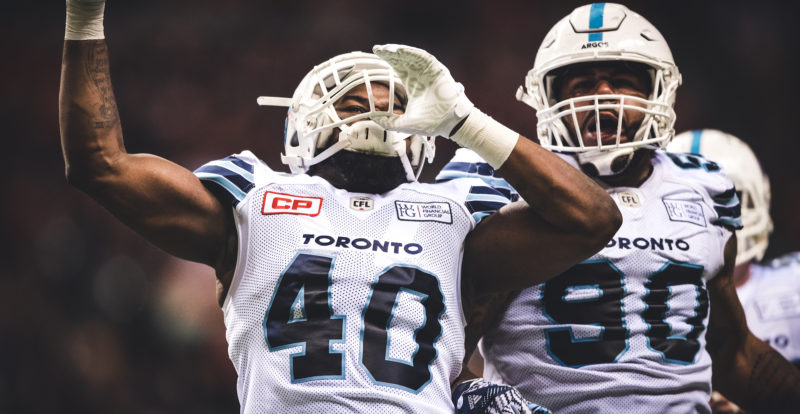 Former Roughrider Tobi Antigha joined the Argos as a free agent and may line up at the other end, or in any one of several positions – middle or weak side linebacker, or either end. His versatility is the wildcard for the defence this year and helps provides Chamblin with numerous options.

Troy Davis and Frank Beltre both return and should fit into Chamblin’s scheme much better, while a healthy Eric Striker, injured for most of last year, will finally get an opportunity to show off what he can do. Canadians Cam Walker, Evan Foster and John Biewald return, while 6’7” Alex Gagnon, a 2017 Stampeders draft pick, joins the team.

The Argos are doing something unique this season. Chamblin will employ not one, but two defensive line coaches, the reasoning being that the end and tackle positions are so different that using two coaches makes sense. Kerry Locklin will coach the ends, while newcomer Carey Bailey will look after the guys on the interior.

Bailey will have Cleyon Laing starting at one tackle. Laing is coming off a season where he led the Argos with six sacks, and was voted the team’s Most Outstanding Defensive Player. There is no shortage of Canadian players backing him up, as Linden Gaydosh, Jeff Finley and Hassan Barry all return. 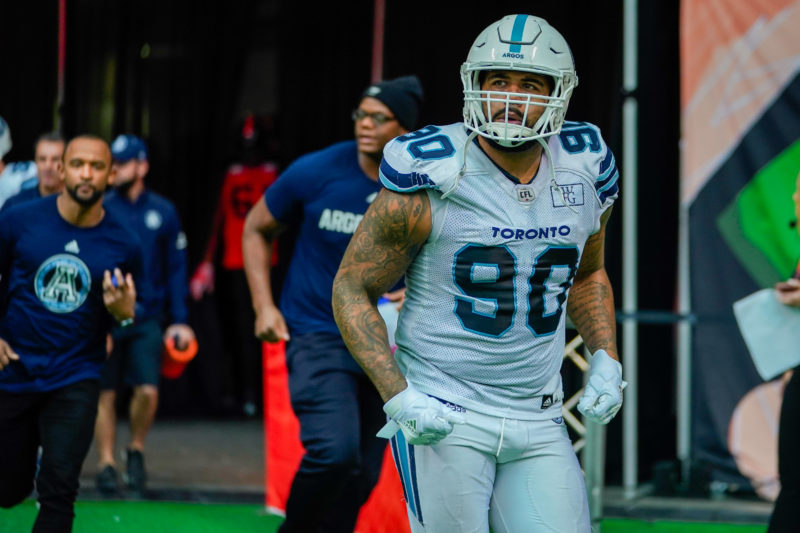 The other starting tackle will likely be an International player as Ken Bishop returns and he will be challenged by newcomers Cory ‘Poop’ Johnson from Saskatchewan and Kingsley Opara from the University of Maryland.

Because of the versatility of the athletes the Argos have on defence, there are several options for Chamblin at linebacker. Bear Woods is the incumbent in the middle. He’s coming off an injury-plagued season and will be anxious to prove he’s back to one-hundred percent.

Newcomer Ian Wild from the Blue Bombers can play MLB or the weak side, again giving the coach some options. Antigha could also find himself in the middle. Akeem Jordan provides a veteran presence and is a solid defender against the run. Justin Herdman can also play the middle and was named the Argos Most Outstanding Special Teams player last season.

While Wild may see time at the weak-side spot, the starting job will likely belong to Micah Awe. The free agent from B.C. adds a physical dimension that will no doubt make him a fan favourite. Along with, again, Antigha in the mix, are Canadians Nakas Onyeka, Nelkas Kwemo, Sean Harrington and Mathieu Loiselle. Because of their high draft positions, Onyeka and Kwemo will be particularly worth watching in camp. 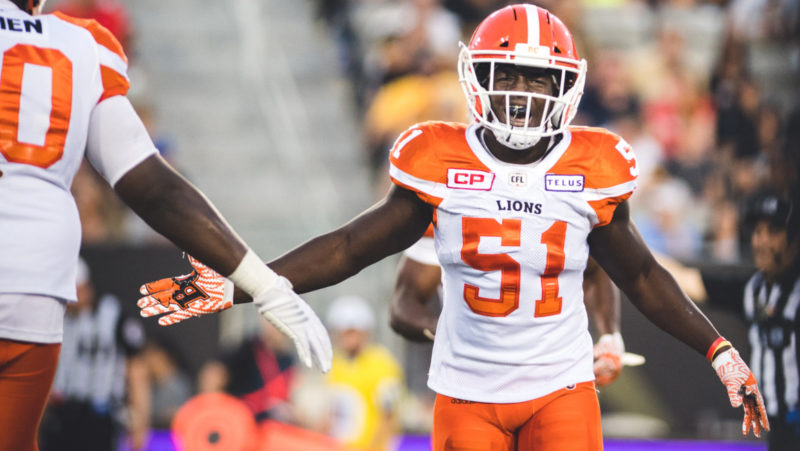 The linebackers will be coached by Kevin Eiben, who flips over from his previous role as Special Teams Coordinator.

At the strong-side linebacker, or “Sam” spot, Alden Darby Jr. replaced Cassius Vaughn mid-way through the season and proved he could play the position. Darby, who scored two defensive touchdowns last year, could also find himself as the boundary cornerback or at halfback. If not Darby, Qudarius Ford, who suffered a season-ending injury in Week One in ’18, could be the starter at “Sam”, or perhaps at one of the halfback spots.

Four Canadians return at safety, all of whom started at least one game last year. Jermaine Gabriel, Matt Black, Robert Woodson and Matt Webster give the Argos solid depth and experience in the middle.

Determining the starters in the rest of the secondary will be perhaps the most interesting part of training camp. Not only are there several candidates for starters, determining who starts where will also be intriguing to watch.

Darby may start at boundary corner. If he does, where does Marcus Roberson Jr. move? If Darby starts at the ‘Sam’, Ford will play somewhere behind him. Newly acquired free-agent Kevin Fogg may start at the field corner, but he’ll be pushed hard. Will Likely is back as is Jonathan Dowling.

Trumaine Washington, last year’s Most Outstanding Argo Rookie, wants his field halfback spot back, but newcomers Devin Butler from Ottawa, and Trey Caldwell from the NFL, along with returning players Anthony Covington and Caleb Ham want to start as well. 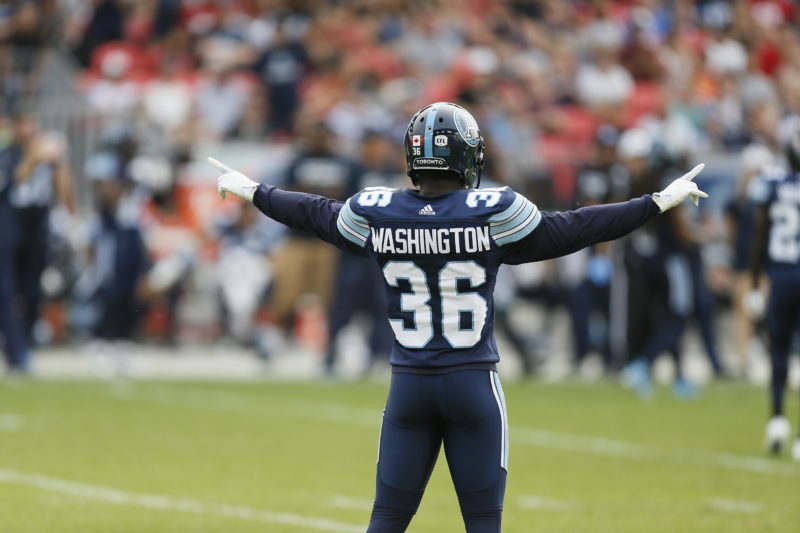 Abdul Kenneh will attempt to secure the boundary halfback spot, but with so many players battling for so few spots, impressing early in camp will be imperative. The list of players wanting to start in the secondary is long.

Chamblin will be moving his players around the secondary in camp for a couple of different reasons. It will not only give him a chance to evaluate players at multiple positions, but it forces players to learn more than one position and get hands-on experience at that spot during camp. This is a battle that will work itself out in May, but not before some intense competition.

Three kickers will return and will engage in an open competition. Drew Brown joined the team in mid-season and connected on 10-of-11 field goals. Both Zack Medeiros and Ronnie Pfeffer struggled at times with their placekicking, but both had solid years punting the ball. Medeiros averaged 46.1 yards per punt, third-best in the league. Pfeffer was right behind him at 45.9.

Jake Reinhart will be back to do the long snapping. Remarkably consistent, the Guelph product has not missed a game in his five seasons with the Argos.

The Argos didn’t score a touchdown on a kick return all season and wanted to do something dramatic. On the first day of free agency the club added both Chris Rainey and Kevin Fogg, arguably the top two returners in the CFL. Fogg was second in the league to Diontae Spencer in punt return yards, while among regular kickoff returners Rainey led the league with a 27.5-yard average, and returned one kickoff and one punt for TDs. These are exciting additions and should allow the offence to work with a shorter field on a regular basis.

Chris Rainey runs 95-yards to the end zone on a punt return for a @BCLions touchdown!! 👀🔥👏#CFLGameDay pic.twitter.com/rLSjZS43D7

Cory McDiarmid assumes the job as Special Teams Coordinator after most recently holding that title with Edmonton. It’s his second stint with the Argos, as he was the club’s Defensive Line Coach in 2002.

The defence will be significantly different this season, both in scheme and personnel, with a handful of new starters in the lineup. After the performance of a year ago the unit needed more than just a fresh coat of paint, and that has been accomplished. How much better will the group be? We will have to wait until May to find out.