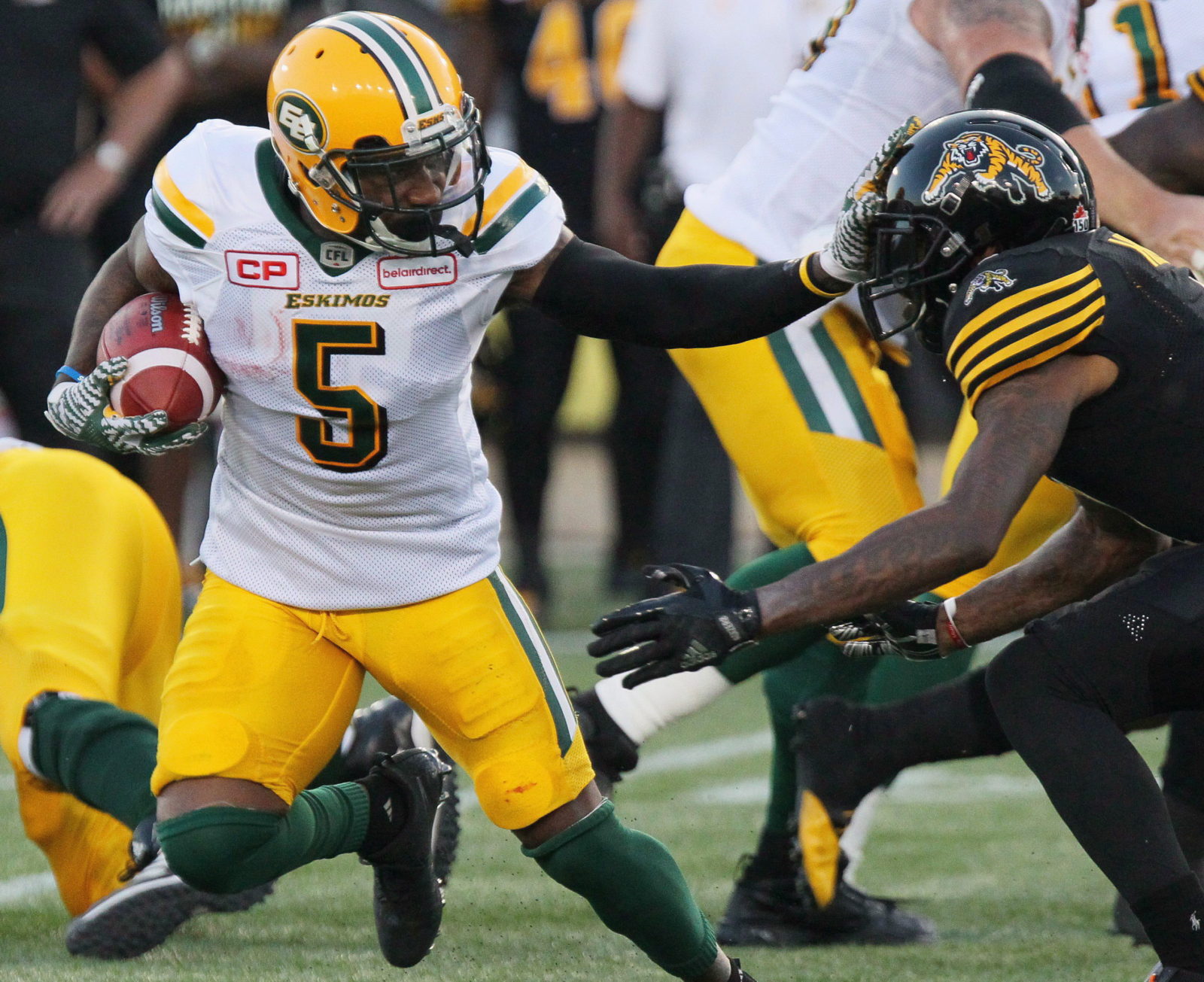 Edmonton Eskimos running back Travon Van (5) gives a straight arm to Hamilton Tiger-Cats defensive back Will Hill (1) during first half CFL football action in Hamilton, Ont., on Thursday, July 20, 2017. THE CANADIAN PRESS/Dave Chidley

Van, 27, most recently spent time with the BC Lions, carrying the ball 10 times for 43 yards and a touchdown in three games this season. The former University of Montana Grizzly came into the CFL in 2015 with the Ottawa Redblacks and spent two years in the nation’s capital, winning a Grey Cup in 2016, before signing with the Edmonton Eskimos in 2017. Over the course of his four-year CFL career, the 5’11, 205-pound tailback has carried the ball 162 times for 748 yards and six touchdowns.

Van spent his first two years playing college football at Marshall University before transferring to Montana for his junior and senior years. Over four years in the NCAA, Van ran 371 times for 1,645 yards and 18 touchdowns.

Ham, 22, played in 44 career games in four seasons at Fordham University (2014-17), tallying 186 total tackles, six tackles for a loss, one forced fumble, one sack, seven interceptions and 23 pass deflections. The 6-1, 192-pound native of McDonough, Georgia, chipped in on special teams as well, returning 10 kickoffs for 128 yards and one punt for 11 yards. He was named First Team All-Patriot League and an ECAC All-Star in 2016 after starting all 11 games at free safety as a junior. Ham was signed by Toronto in January but released prior to training camp in May and he most recently spent time with Montreal signing with the Als in September before being released at the beginning of October.

Ham’s father, Tracy, played 215 games across 13 CFL seasons with the Edmonton Eskimos, Toronto Argonauts, Baltimore Stallions, and Montreal Alouettes. He ranks 10th all-time in CFL passing and was inducted into the Canadian Football Hall of Fame in 2010.

Duke, 25, is the all-time leading receiver at the University of Charlotte, racking up record after record in his four years (2013-2016) for the 49ers. The North Carolina native is the school’s all-time leader in receptions (253), receiving yards (3,437) and receiving touchdowns (24), playing in 46 games. He holds each of the program’s top nine single-game receiving yard outputs with 13 100-yard games including a school record 254 in 2014 vs. The Citadel. Finished his career fifth all-time in FBS career receptions and seventh in career yards. The 5’9, 170-pound WR has spent the last two years with the Carolina Panthers, playing on their practice squad in 2017 and through the pre-season this season before being released in September.