Don Matthews: The Loss of a Legend 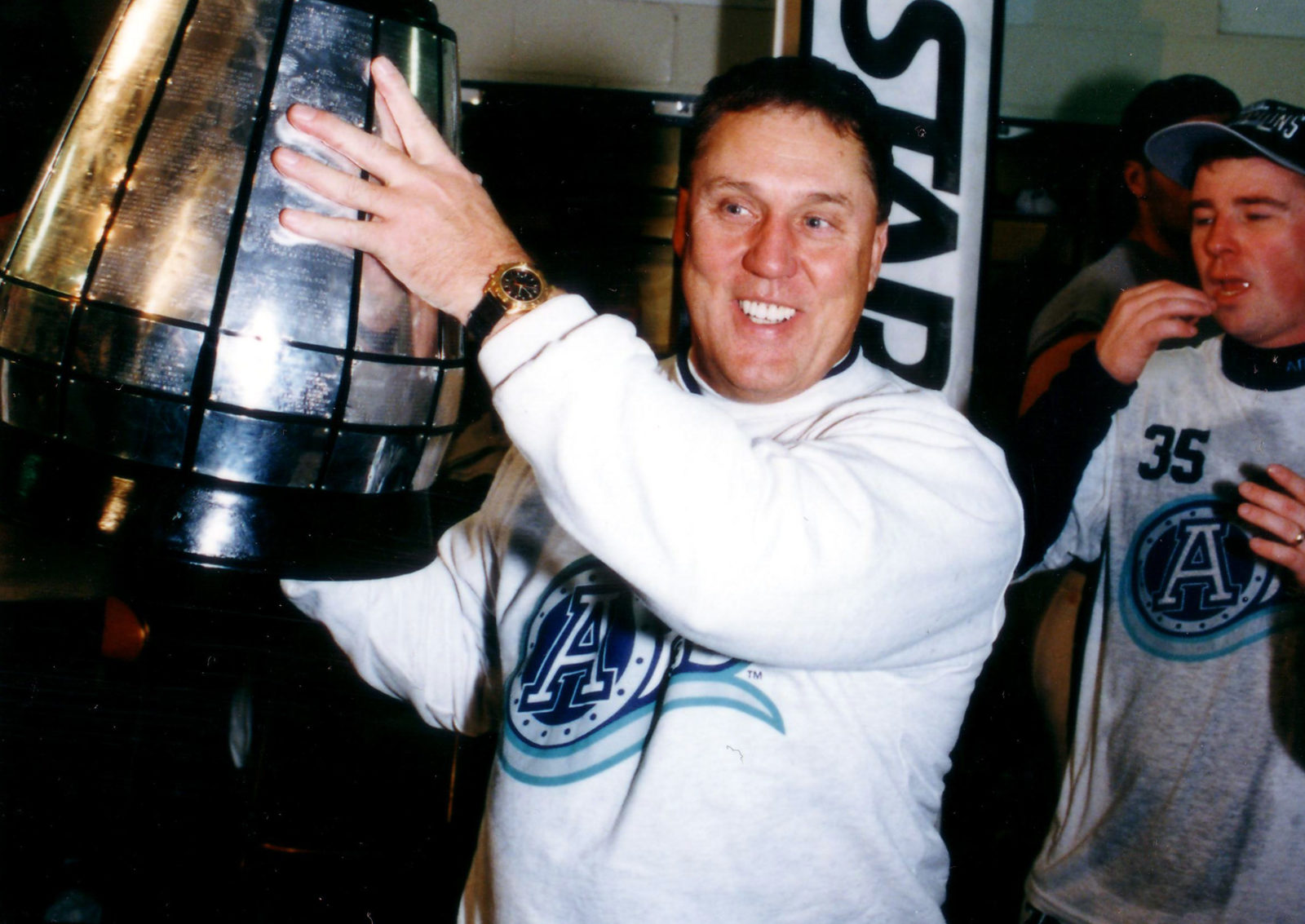 Don Matthews: The Loss of a Legend

He was simply known as ‘The Don’.

The ultimate player’s coach, Don Matthews made a trio of stops in Toronto before his well-deserved appearance in the Canadian Football Hall of Fame.

He was loved, he was hated. He loved to talk, but hated much of the media – a dislike that was reciprocated by many reporters. He was brash, but he could be caring.

And man, did he know how to win.

Matthews arrived in Toronto in 1990 after winning five Grey Cups as an assistant in Edmonton, followed by his first job as a head coach with B.C.

“Nobody knew the psychology of football players better,” said Schultz. “He had this incredible way of making you hungry to play. The other thing he knew how to do was criticize you at the most opportune moments.”

“I played really well one game,” reflected Schultz, “I wasn’t cocky, but you could see I was feeling good. He walked by and he just casually said to me ‘You know, I thought you could play a lot better than you did.”

“I was completely crushed,” admitted the big man. “But what that did was to raise the expectations of what I could do even higher. So rather than pat me on the back and say way to go, he challenged me to be even better. His ability to understand that aspect of the game was absolutely remarkable.”

“Rather than pat me on the back and say way to go, he challenged me to be even better.”

The coach spent just one season in Toronto. When he returned a handful of years later he would leave a lasting imprint on the franchise.

His 1996-97 teams were the greatest in Argo history and among the CFL’s best ever. Matthews’ second coming in Toronto coincided with the free-agent signing of a marquee quarterback who was used to the same kind of success as his new head coach.

The combination of Matthews and Doug Flutie was together for just two seasons, but not surprisingly, resulted in a pair of Grey Cup championships.

“He came in and our offensive coordinator John Jenkins and myself were in the room,” said the QB, “And Don looks at us and says ‘Doug, this is your team. John, stay out of the way.’ He said ‘Doug, if you throw five interceptions you’re going to get a chance to throw six, you’re not coming out’.”

After a good laugh, the ’84 Heisman Trophy winner continued.

“There was a lot of interaction between John and I on the offence,” said Flutie, “But the point was that (Matthews) gave you, as a quarterback, total confidence. You’re his guy, you’re not coming out, play with confidence, turn it loose and have fun. He had a real knack for making his players feel confident and relaxed and diverting any pressure that may have been around onto himself.”

What did Flutie take from Matthews after their stint in Toronto was over?

Perhaps the biggest beneficiary of Matthews’ arrival in Toronto was Michael Clemons. Already a star in the league, Pinball would hit a new level of success under Matthews, who decided to move him from running back to the slot.

“He said ‘I’m going to wear your behind off’”, laughed Clemons. “He said ‘You better be in shape because your tongue is going to be hanging out of your mouth.’ He always put people in the right position to succeed.”

“He said ‘You better be in shape because your tongue is going to be hanging out of your mouth.’ He always put people in the right position to succeed.”

The results of the positional change were extraordinary. In those two seasons, Clemons averaged 119 receptions for just under 1,200 yards. He had been re-invented in his eighth season in Double Blue.

“He had it all and was a great leader,” concluded Clemons.

In a move that shocked everyone, Matthews was brought back in 2008 for a third stint, two seasons after he had resigned in Montreal for health reasons. Under Rich Stubler the Boatmen struggled to a 4-6 record and following a 45-19 loss in Montreal, he was relieved of his duties. Matthews was brought in as the interim head coach.

But something was different this time around. Matthews didn’t seem like the same old Don. Amazingly, the swagger was almost completely gone. He actually seemed to enjoy spending time with the media. Strangest of all, the Argos lost – and badly – dropping all eight games he coached by an average score of 39-21.

Matthews’ combination of self-confidence and love for the game was so strong he felt he’d be able to turn things around with the Argos, but not even The Don could accomplish that.

There’s still a connection with the Argos, one that is strong.

General Manager Jim Popp and Matthews were together as coaches in Saskatchewan, before teaming up as a GM/coach combination in Baltimore and Montreal, a pairing that would reach the Grey Cup five times in seven years.

“He was always ahead of the game,” Popp told Argonauts.ca, “He was an innovator, he was well read and he was always trying to find the edge that made his teams different than everybody else.”

Popp again preached the psychological aspect of Matthews’ success but also talked about the X’s and O’s component of his makeup.

“He didn’t stay stationary,” explained Popp. “He really studied film and he was never afraid to go outside of the box. We may have practiced something for four days, then he’d show up on the day of the game and say ‘Let’s try this’.”

Popp alluded to an often hidden – and to some shocking – side of Matthews’ personality.

“He was a real humanitarian,” admitted an increasingly emotional Popp. “He had a real talent as a leader, and he reached out and helped people without letting anyone know that he did it.”

Matthews’ numerous ailments over the last few years were well documented, but he fought his failing health with the same disdain for the illnesses that he felt for those who were in his mind trying to distract his football teams.

He won five Grey Cups as a head coach and five more as an assistant. Despite his incredible success, people will always remember the personality first.

Don Matthews was truly one of a kind.