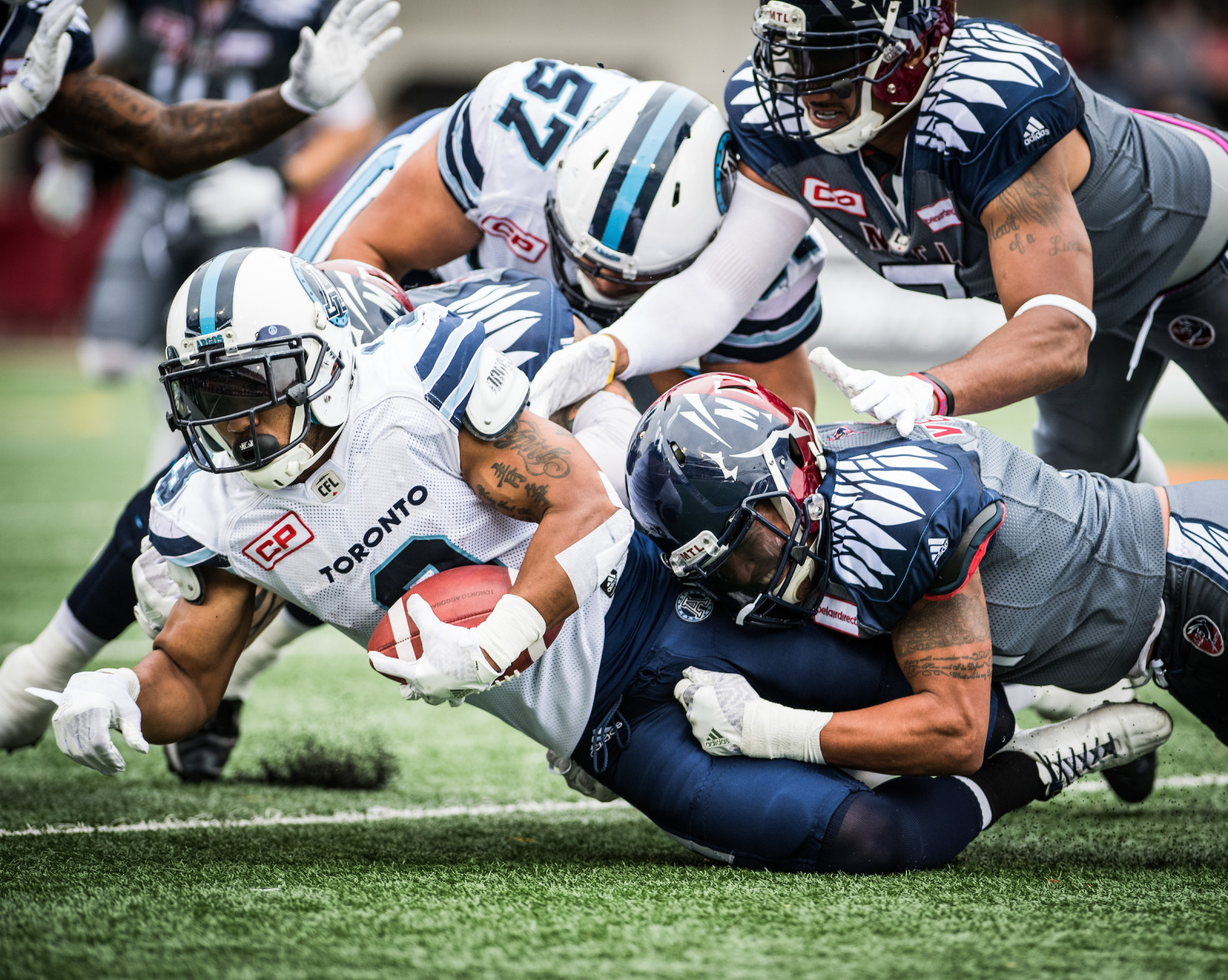 Brandon Whitaker (3) and Winston Venable (31) during the game between the Montreal Alouettes and the Toronto Argonauts at MCGill Stadium in Montreal, QC. Sunday, October 2, 2016. (Photo: Johany Jutras)

MONTREAL – Rakeem Cato threw for four touchdowns and the Alouettes offence came alive as Montreal cruised to a 38-11 victory over the Toronto Argonauts on Sunday afternoon.

Kenny Stafford hauled in two touchdowns and Samuel Giguere caught and rushed for a pair of his own to secure the win in Jacques Chapdelaine’s Montreal head coaching debut. The Als scored 14 points off of turnovers in the victory.

In his first game as a starter for the Argos, Drew Willy threw for 226 yards and an interception on 24/35 passing.

Montreal’s offence put points on the board on its opening drive and never lost the lead to snap a four-game losing streak.

The Alouettes quickly went to work on their first possession. Cato found Stafford downfield for a 48-yard strike on the first play, Montreal’s longest pass completion of the season. Giguere then hauled in 15-yard touchdown on the next play to cap off the two play drive and give the Larks the early 7-0 lead.

A strong return by Diontae Spencer on a deep punt put the Argos at midfield, where Willy and the offence looked to put some points on the board. A big run by Brandon Whitaker was erased after Kyries Hebert forced a fumble, which was recovered by Raymond Taylor and the Als but they could not add to their lead.

Montreal was penalized for a roughing the passer on Willy which moved the Boatmen downfield. A series of short passes put the Argos into scoring territory but could only manage a Lirim Hajrullahu 41-yard field goal to open the second quarter.

Stefan Logan nearly took the ensuing kickoff all the way to the end zone but was brought down into Argos territory, a 70-yard return. The Argos defence stepped up and held the Als off the scoreboard as Shawn Lemon recorded his eleventh sack of the year.

Willy and the Argos moved the chains, converting four straight second downs to cross midfield. Jovon Johnson then put an end to the drive, intercepting Willy and giving the ball back to Montreal. Back to back first downs by BJ Cunningham put the Als in the red zone, where Cato eventually found Stafford in the back of the end zone for another touchdown to increase the lead to 14-3.

A big gain by Tori Gurley on the sideline helped the Argos offence as Toronto looked to cut into the deficit before the halftime whistle. Kenny Shaw added a first down before Hajrullahu booted another field goal as Montreal now led 14-6.

A bad snap on second down pushed the Als all the way back to their own goal line and forced a third-and-35 situation. Montreal opted to concede the safety but still led 14-8 heading into halftime.

The Alouettes quickly added more points to their lead to open the second half. A pair of first downs by Nik Lewis moved Montreal into field goal range, where Anthony Fera hit a 24-yard kick to increase the lead to 17-8.

Following a two-and-out by the Argos, Cato went back to work. Tyrell Sutton burst out for a 14-yard run and Duron Carter added a 31-yard gain. Cato then found Stafford in the end zone for his second touchdown catch of the game as Montreal now led 24-8.